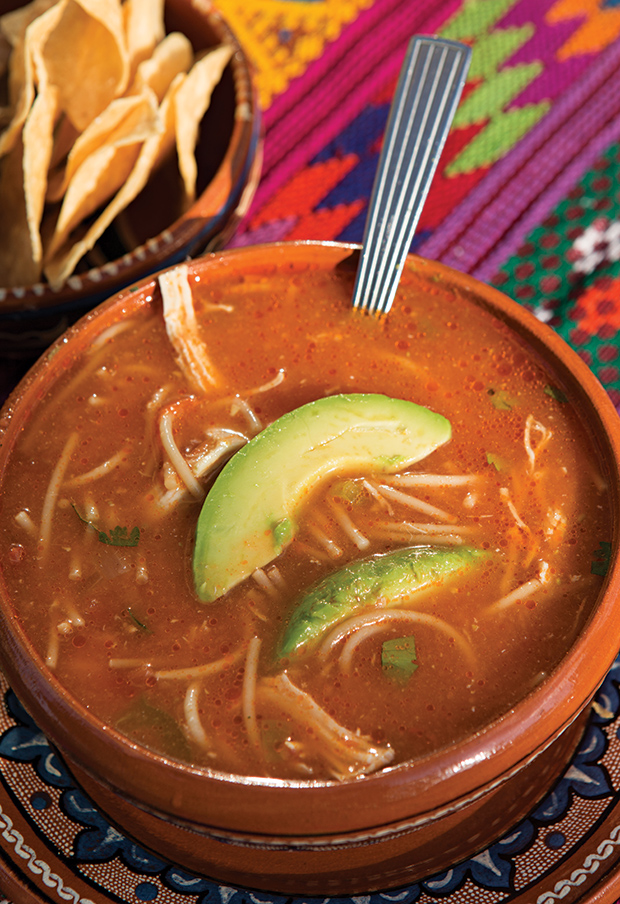 Sopa de fideo, a nourishing soup made with vermicelli pasta, is hard to find in restaurants north of the Rio Grande.

For restaurateur and cookbook author Sylvia Casares, the road to becoming Houston’s beloved “Enchilada Queen” started mid-career. “I was 42 when I left the corporate world,” she says. “Looking back on it, I surprise myself when I think about what I did: Leaving a secure, nice job with great pay and great benefits, and diving in feet-first without any prior restaurant experience.”

On December 22 and 23, Sylvia Casares will lead tamale-making parties known as tamaladas at two of her three restaurant locations in Houston. Guests will make and take home at least a dozen tamales.
See www.sylviasenchiladas.com to reserve your spot.

This recipe is adapted slightly from The Enchilada Queen Cookbook by Sylvia Casares with Dotty Griffith; makes 6 servings.

Made with thin pasta called fideo, this soup is a weekday staple in many Texas border towns.

1. In a large skillet over medium heat, heat 2 T oil. Add the vermicelli and cook, stirring frequently, until light golden brown. Place the browned pasta in a large saucepan or stockpot.

2. Using the same skillet over medium heat, add the remaining 1 T oil and the onion. Cook, stirring occasionally, until the onion is transparent. Set aside off the heat.

3. In a blender jar or using a mini-chopper, process the chopped tomato with 1/4 cup water for about 30 seconds, until smooth.

5. Over high heat, bring to a boil, then reduce the heat, cover, and simmer for 10 minutes. Set aside, off the heat, uncovered, for 5 minutes. Stir in the chicken and add avocado slices before serving.

In a spice or coffee grinder, puree garlic with water, and set aside. Grind cumin seeds, then peppercorns, adding 2 T water each time. Stir together to make a paste. Keeps 1 month.

Born in the border town of Brownsville, Casares is a third-generation Mexican-American with parents from Texas and grandparents from Mexico. She grew up cooking with her mom, her tias (aunts) and her abuela (grandmother).

After graduating from the University of Texas at Austin with a degree in home economics, Casares went to work for Uncle Ben’s in Houston, where she developed recipes in the company’s test kitchen. After 10 years, she left for a sales and marketing job with Kraft Foods. However, the job required a lot of travel, and when she turned 40, she decided to make a change that would allow her to establish stronger roots.

“I started thinking about what else I could do, and I figured I could take my skills and open a restaurant,” she says.

Her first effort, a restaurant called Camino Real in Rosenberg, offered her plenty of on-the-job training, but when she lost the restaurant a few years later in a divorce, she found a new location in West Houston and started from scratch. “It was your basic, run-of-the-mill hole in the wall with 18 tables,” she recalls. “By that time, I had realized that my enchiladas were a big hit, so I decided to call it Sylvia’s Enchilada Kitchen as a way to market what I was becoming known for.”

That was approximately 18 years ago. Naming her restaurant Sylvia’s Enchilada Kitchen set her on a path that would lead to running three restaurants and eventually writing a cookbook.

Along the way, a reporter dubbed her the “Enchilada Queen,” and the nickname stuck. Her restaurants, which are famous not only for their enchiladas but also for made-from-scratch soups, grilled-meat platters called parrilladas, and South Texas-style comfort foods like chiles rellenos and tamales, are regularly honored as some of the best places for Tex-Mex in Houston.

These days, in addition to overseeing the operations of her restaurants, she teaches classes on how to make traditional Mexican dishes such as tamales, chiles rellenos, and gorditas. This winter, on December 22 and 23, she’ll host tamale-making parties called tamaladas, which she remembers fondly from her childhood in Brownsville. “A tamalada is typically held in someone’s home, usually on December 24th,” Casares says. “It’s typically multi-family and multi-generational. They start really early in the morning, and by dinner, all the tamales have been made.” 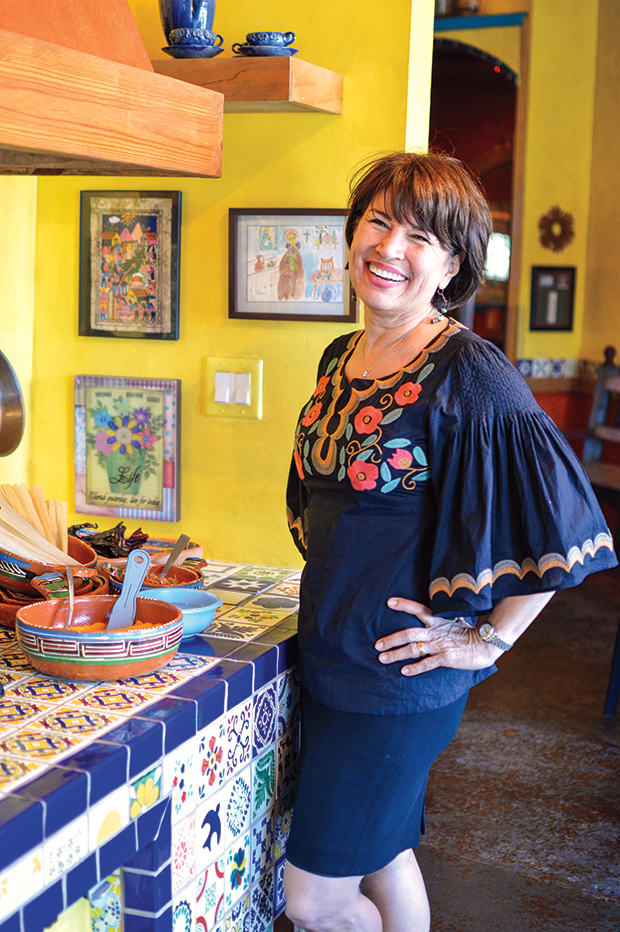 Over the years, she says, students in her cooking classes would ask her if she had plans to publish a cookbook. She had toyed with the idea, but in 2012 she started to pay the notion serious attention, eventually collaborating with food writer Dotty Griffith to test recipes, develop tips and shortcuts, and record South Texas culinary histories for posterity. Along the way, she enlisted her brother, novelist Oscar Casares, to write the foreword. Published by St. Martin’s Griffin Press, The Enchilada Queen Cookbook: Enchiladas, Fajitas, Tamales and More Classic Recipes from Texas-Mexico Border Kitchens includes 80 recipes for enchiladas and other traditional dishes, including 14 essential South Texas sauce recipes ranging from classic Tex-Mex chili gravy to mole poblano. The book highlights not only recipes passed down to Casares by her mother and grandmother, but also recipes such as sopa de fideo (a Mexican noodle soup; see recipe) and arroz con pollo (chicken and rice) that she’s adapted over the years to appeal to health-conscious cooks.

“I’m very proud of the cookbook,” she says. “These recipes work; I’ve tested them and re-tested them, and I’ve written them so that people can make them at home,” she says. “One of my key recipes is for something I call Holy Trinity Paste; it’s a combination of cumin, black peppercorns, and fresh garlic, and it’s different than what you’ll find in other cookbooks. But I’m from Brownsville, and this is South Texas. This is how our grandmothers and mothers did it; it’s Tex-Mex, the original fusion food.”