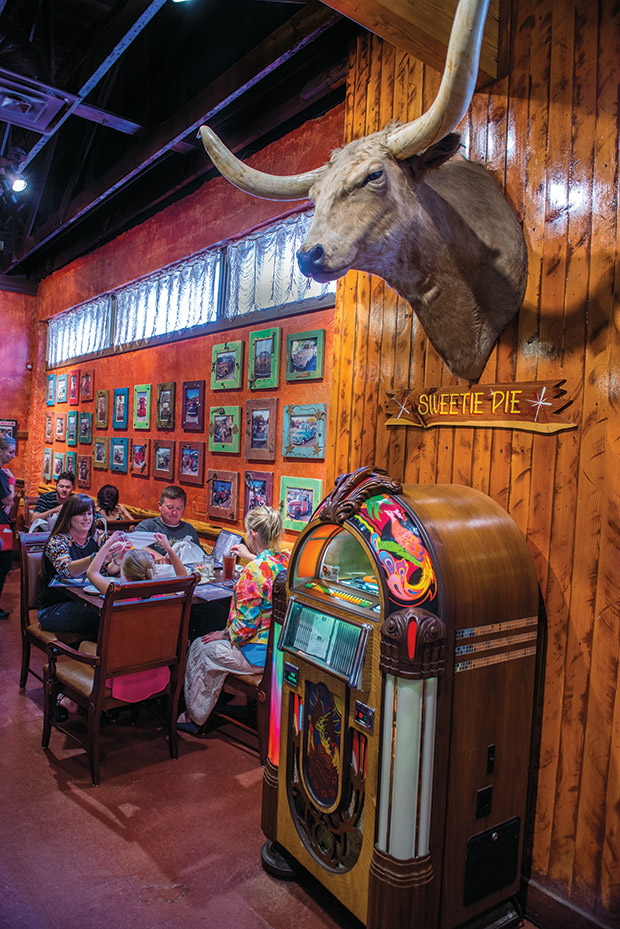 At Sweetie Pie’s Ribeyes, a popular restaurant across the street from the pink granite Wise County Courthouse in Decatur, there’s no ambiguity about the house specialty.

So upon a recent midday visit, nibbling on the warm yeast rolls that are delivered promptly upon arrival, my small group decided to order three different versions in what I dubbed the “Sweetie Pie’s rib-eye trifecta.”

My wife Eileen ordered a nine-ounce lunch-portion rib-eye, while her cousin Jim opted for the chicken-fried rib-eye. Jim’s spouse Lisa waffled between a salad and one of the restaurant’s chicken options before echoing my order: Sweetie Pie’s rib-eye pot pie. (For diners not interested in rib-eyes, chicken dishes, sandwiches, and salads are available, too.)

Lisa had serendipity on her side. When Eileen and I had wandered in after the lunch rush a few months before, the signature pot pie had already sold out. We learned that if you really, really want one, you should reserve one in advance. So I had been proactive on this trip; not only had I reserved one for myself, but I had nabbed another on pure speculation.

Our young waitress seemed concerned when we announced our choices, having seen a notice in the kitchen that the daily pot-pie batch was gone. But she checked anyway, and the cook was reassuring: “We’ve got two back here that some guy reserved yesterday.” Lucky for us, I was that guy.

Sweetie Pie’s Ribeyes opened in May 2006 to the disappointment of a few local residents, who were hoping that the Vinyard family, which operates multiple branches of the Babe’s Chicken Dinner House concept throughout North Texas, had selected this 19th-Century downtown building for another chicken place. But Joe Vinyard, the youngest of five Vinyard siblings, had been tasked with diversifying—hence Sweetie Pie’s emphasis on steak. The name, Sweetie Pie’s Ribeyes, honors Joe Vinyard’s late sister-in-law, Mary Beth. If she had had a bull, she once said, she would have named it “Sweetie Pie.” And yes, the taxidermy you’ll see among the restaurant’s Western-themed decorations includes an imposing “Sweetie Pie” mount to pay tribute to Mary Beth’s unrealized dream.

After a few initial missteps, Vinyard and his crew landed in a groove: These days, hand-cut Angus rib-eye steaks are seared on a griddle at 550 degrees, which seals in the juices and creates a caramelized yet tender exterior. This dish is especially tasty with a side dish of mushrooms sautéed in garlic, butter, and sherry.

Griddle cooking of steaks is not a universal practice in beef-crazy Texas, Vinyard acknowledges. The acclaimed Lowake Steak House near Ballinger is a decades-old proponent of the method, but some other famous steak destinations are devotees of open-fire grilling. Vinyard’s father used a skillet to cook steaks at home when he was growing up, though, and that’s his reason for grilling on a slab.

To make the chicken-fried rib-eye steaks, cooks eschew the standard round steak cutlet in favor of a rib-eye that has been tenderized by hand before battering. The result is a crisp crust and a steak so delicate it can be cut with a fork.

The third leg of my Sweetie Pie’s rib-eye “trifecta” is one of Vinyard’s eight-inch deep-dish beef pot pies, which are made from scratch every morning. Most diners eat this with a spoon instead of a fork, as beneath the golden crust lies a rich stew of steak bits, red and green bell peppers, green beans, corn, baby carrots, potatoes, and mushrooms.

The complex roux, made from rib-eye drippings, flour, and seasonings that include salt, pepper, and a hint of cumin, binds it together. The price: $10.99, a lunchtime bargain, especially since our leftovers became a savory dinner course back in our Dallas suburb.

Of the rib-eye pot pies’ runaway popularity, Manager Rick Flores notes that on cold days, “everybody wants them.” Other times, he says, “Oilfield guys will show up and wipe them out right away.”

To me, a Sweetie Pie’s experience is not complete without a tableside serenade like the one provided to my group by longtime waitress Connie Bullard, who holds a music degree from Texas Tech University. Every hour or so, Bullard takes a break from waiting tables to grab a wireless microphone and serenade diners with classics like “Crazy” and “I Fall to Pieces.”

“You sound just like Patsy Cline,” our table agreed. When we asked if others thought the same thing, she said with a smile, “Yes, I get that all the time.”

As we did the day we visited, you can walk off your “over-ordering” around the square in Decatur, looking skyward at the 1896 courthouse cupolas. If you’re in the market for a cowboy hat, stop by the Biggar Hat Store, where the owners may be shaping a custom straw hat or fedora in the back room.

Sweetie Pie’s is open for dinner, too, with four different cuts of sizzling rib-eyes, plus a variety of burgers, salads, chicken, and fish dishes. One of the most popular evening side dishes is a baked potato that has been dipped in boiling pine rosin and wrapped in brown paper, which turns out extraordinarily fluffy.

But if the rib-eye pot pie is your choice, you’ll get that only at lunch. Don’t forget to arrive early or call ahead. You won’t regret it.