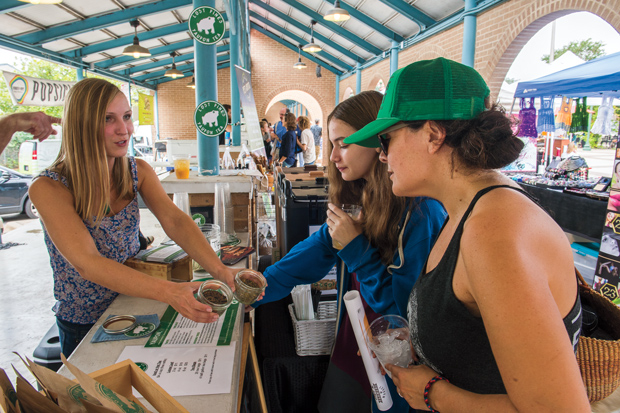 You can find Lost Pines Tea at farmers markets in the Austin area.

Jason Ellis, an ardent forager and naturalist, has long been passionate about organics. In fact, his East Austin home, within a half-mile of both Boggy Creek Farm and Springdale Farm, boasts a front yard full of edible plants, fruit trees, and even a flock of domestic ducks in a large hog-wire pen.

To order Lost Pines Yaupon Tea or learn more about it, call 512-748-4546
lostpinesyaupontea.com.

With his interest in native plants, it’s small wonder Ellis grew fascinated with North America’s only naturally caffeinated plant—yaupon holly, which grows prolifically in Texas east of I-35 and is considered by most ranchers to be a nuisance. Ellis began reading everything he could about it and soon spread his enthusiasm to two friends who shared his social, environmental, and locavore sensibilities. The three eventually formed the business that would evolve into Lost Pines Yaupon Tea.

As I sip yaupon tea with Ellis and his two partners, his girlfriend Heidi Wachter and their friend John Seibold, I mention I’ve long been roasting and brewing my own. My husband, Shannon Tompkins—a 7th-generation Texan and degreed biologist—first brought it to my attention a couple decades ago on a Hill Country turkey hunt. 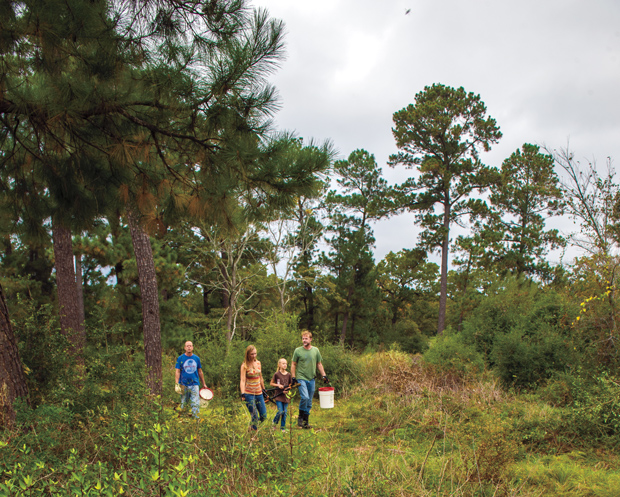 The tea team forages for yaupon in the Bastrop area. Tea made from yaupon leaves contains about the same amount of caffeine as green tea.

“Then you know its Latin name,” Ellis says, laughing. And I do: It’s Ilex vomitoria, which roughly translates to “holly that makes you throw up.”

“But it doesn’t,” Ellis continues. “The name came about because some Native Americans fasted each spring, then drank a ceremonial tonic brewed from yaupon and other ingredients to induce vomiting. They believed it would purify their bodies and spirits for the coming year. After fasting for three days, they probably could have drunk a bunch of water and gotten the same result.” Research from the Lady Bird Johnson Wildflower Center and other sources backs up Ellis’ explanation.

I hold the tea mug up to my face, and inhale its fragrant, naturally sweet aroma. In addition to caffeine (about the same amount as in a cup of green tea) it’s rich in theobromine, an alkaloid compound and antioxidant found in dark chocolate and known to boost mood and happiness. It also contians polyphenols, which some studies say help prevent degenerative diseases. Plus, with lighter tannins than green or black tea, it doesn’t develop an astringent flavor if accidentally over-steeped. Perhaps best of all, its humble, homegrown-in-Texas nature makes me feel good about sipping it all day long.

Ellis had toyed with the idea of producing a wild-harvested yaupon tea for several years. A few other Texas companies, including CatSpring Yaupon Tea from Cat Spring and Houston’s Wild South Tea, had already entered the yaupon tea market, but he saw that as a plus. “The tea market is blowing up,” he says, “as people are getting away from sodas. I talked to John and Heidi, and we decided to jump in several years ago. We had no name, no logo—just a lot of passion and drive to succeed.

”Finding yaupon leaves to harvest proved surprisingly simple. “We placed an ad on Craigslist,” Wachter says, “offering to come clear out yaupon on local ranches, and we saw that we were getting a strong response from the Bastrop area, so we focused our efforts there. The ranchers welcomed us with open arms. As we would learn, clearing out the yaupon helps restore habitat for the endangered Houston toad, for which the landowners get a tax break.”

In 1970, the Houston toad, which disappeared from its namesake city in the 1960s, became one of the first amphibians to be placed on the federal endangered species list. The toads prefer deep, sandy soil supporting loblolly pine forest or mixed post oak-woodland savannah with an open understory, so Bastrop County ranks among their top habitat preferences. The county is included in the Houston Toad Safe Harbor Agreement, a pact with incentives for landowners to encourage them to help in the recovery of this endangered species.

As the three partners would learn, not only would clearing out the yaupon understory help the Houston toad, it would also help control wildfires. In the 2011 Bastrop fire—the most destructive wildfire in Texas history—yaupon acted as a “ladder fuel” that allowed the fire to climb much higher and do far more damage than it would have otherwise done.

And so the three had a quintessential “Eureka!” moment: They had their name—Lost Pines Yaupon Tea—and their logo, the Houston toad. They soon went to work harvesting, roasting, bagging, and marketing.

As the three partners would learn, not only would clearing out the yaupon understory help the Houston toad, it would also help control wildfires.

“When we started harvesting a few years ago,” says Seibold, who now does most of the yaupon-gathering, “the fire damage was extensive. Now, I look for baby loblolly pine trees as I harvest, and I clear the yaupon out around them. It’s so good to see the young pines growing taller each time I go back. But there’s a seemingly endless supply of yaupon: Forest managers cut a 100-yard-wide firebreak last year through one of the ranches, and it’s already filled in with yaupon.”

Ellis’ eyes twinkle as he describes efforts in Florida and Georgia to plant, cultivate, and harvest yaupon in row crops. “Just think of all of that labor, equipment, and water,” he says, shaking his head.

From the harvesting fields and forests, the team takes the yaupon to a commercial kitchen in Bastrop, where the leaves are roasted in a convection oven. The full-bodied dark roast is a stellar stand-in for my morning coffee, while I prefer the light roast for iced tea. Both are sold as loose-leaf and in tea bags.

Online sales on the company’s website are increasing by leaps and bounds each month, with customers from all over the United States and as far away as Canada, England, Greece, and Malaysia. “It was kinda funny to be shipping tea to Singapore,” Ellis says. Also, Lost Pines Yaupon Tea is currently on the menu at Pitchfork Pretty, Counter Culture, and Hi Hat Public House restaurants in Austin, with more eateries coming onboard.

Still, Ellis finds that the best way to introduce folks to yaupon tea is in person. “We sell tons in person,” he says, “when we can do demonstrations, offer samples, and get people excited about the restoration work we’re do- ing in Bastrop.

”In addition to regular tastings at Austin’s Wheatsville Food Co-op and other area stores, the company sells and offers samples at farmers markets—including the Sustainable Food Center’s downtown Austin and Sunset Valley markets, the Texas Farmers Market at Lakeline Mall, and the HOPE Farmers Market on Austin’s east side.

“What we’re doing is beyond organic and sustainable,” Ellis says. “It’s actually beneficial: restoring the forest and creating habitat for the Houston toad. Plus, we need no irrigation systems, no chemicals or cultivating, and no exorbitant processing and transportation costs. With Lost Pines Yaupon Tea, the only hands that touch our product are ours; we’re the entire supply chain. We believe that if you believe in us, you’ll believe in our tea.”