The King of Cakes

Rao’s Makes this Mardi Gras Confection a Delight to Behold

It seems that most of the recent food trends in America—the reimagining of ramen, the curious appeal of Brussels sprouts, the surge of gluten-free products, and the widespread adoption of such ingredients as quinoa and coconut water—have centered around buzzwords such as “farm-to-table,” “unprocessed and natural,” “low-glycemic index,” and “organic and locally sourced.” 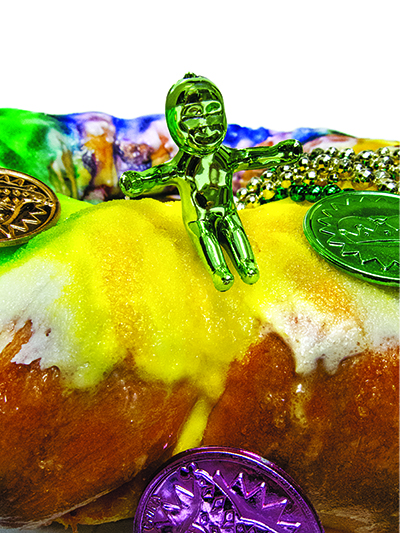 Mardi Gras (that’s Fat Tuesday in French) falls on March 4 this year. Indulge in a King Cake to celebrate.

But sometimes, all that clean living flies out the window—especially when faced with the jelly-filled, rainbow-frosted, carbo-licious confection known as the Mardi Gras King Cake. Even the most virtuous have been known to cast aside dietary restraint with the same devil-may-care spirit that Mardi Gras revelers toss beads into a crazed parade crowd. After all, you only live once. Or, if you’re observing the traditions of Mardi Gras and Lent: It’s your last chance to live it up until Easter falls some six weeks later.

The custom of eating a wreath-shaped cake on January 6 to honor the Three Kings (or three wise men) has its origins in old-world Europe, but at some point the cake wound up in the Americas, and the scope of the celebration expanded. In the United States, the tradition found a natural home in New Orleans, and by the 1950s, the King Cake had become a fixture of Mardi Gras celebrations—blanketed with purple, gold, and green frosting, often draped in Mardi Gras beads, and served repeatedly between January 6 and Fat Tuesday (March 4 this year). The original coin or bean, inserted into the cake to represent the baby Jesus, morphed at some point into a ceramic—then plastic—baby. But the idea remains the same: If you happen to find the trinket in your slice of cake, it will be your turn to bring the cake to the party next year.

In southeast Texas, where Louisiana traditions influence everything from cuisine and music to language, Rao’s Bakery cranks out more than 8,000 King Cakes every year, shipping them as far away as Ohio and North Dakota. Based in Beaumont, where the first Rao’s opened in 1941, the bakery now has five locations, including stores in Nederland and northwest Houston. “We start baking King Cakes the last week of December,” says Rao’s Bakery owner Jake Tortorice, who grew up a few blocks from the original location on Calder Avenue. “We do about 100 a day in each of our bakeries, because we gotta get a head start. Some people come in and buy 200 at a pop. We don’t wholesale ’em, but a lot of salespeople bring King Cakes to new clients. They tell me that a lot of times, they can’t get in to see the boss. But if they’re bearing a King Cake, they’re almost guaranteed to get a minute.”

Packed in a box with a handful of purple, green, and gold beads; a plastic baby; and a brief history of the King Cake tradition, Rao’s King Cakes come in multiple flavors and two sizes. “This is our second year to offer our mini King Cake, which we call our Petite Lafitte. It’s about six inches in diameter and good for a small party,” says Jake.

A party of one, perhaps. After all, it’s no small pleasure to sink your teeth past the lurid and delicious icing—crunchy with bits of sugar—into the cake’s flaky layers and gooey filling. I like the strawberry, but other varieties include blueberry, cinnamon, raspberry, and the new Voodoo King Cake—a combination of cream cheese, chocolate fudge, and coconut that Jake says is his current favorite. “Who can turn down chocolate?” he asks.

Along with seasonal King Cakes, Rao’s also produces a long list of other pastries and desserts, including tres leches cake and behemoths like the Dobashe, a six-layer confection enrobed with chocolate and covered with walnuts. Customers also come in for Italian desserts like cannoli or tiramisu, gelato, cup-
cakes, or for soups and salads—many with an Italian flair. “If you meet an Italian in the Golden Triangle, I bet you a dollar to a doughnut that they’ll be Sicilian,” Jake says. “I can tell you. I am 100 percent Sicilian. In the early 1900s, you know, a lot of Sicilians came through Ellis Island, but a lot also came through New Orleans and ended up here.”

In fact, Jake makes frequent visits to Italy to come up with fresh ideas for the Rao’s menu, which now includes things like imported coffee, focaccia pizza, and sandwiches with Italian mortadella or Sicilian tuna. “When I bought Rao’s in 1998, some people here had never heard of gelato. But now they come in for it special,” he says. “But the truth is, we couldn’t make it without our cakes.”

Because at Rao’s, cakes are king.