They Know Their Dough

Written by: Veronica Meewes
Photos by: Will van Overbeek 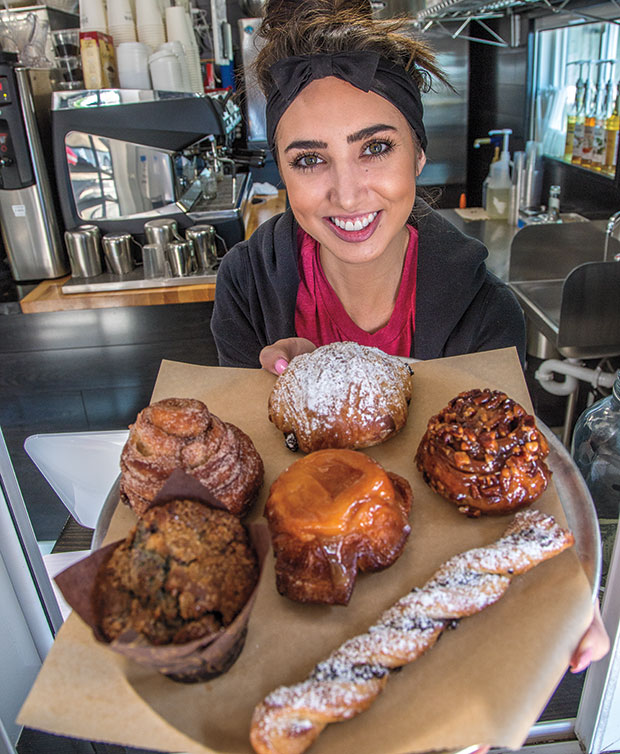 Regulars who make the drive out to Pieous, a pizzeria and bakery on the western outskirts of Austin, know to expect a line; it’s part of the experience, really. The inscriptions scrawled on the chalkboard walls serve as a reminder that pizza this good is meant to be anticipated with patient reverence. “Food is our religion” is artfully inscribed at the entrance, while another wall invites diners to “come worship at the altar of Pieous.” Here, dough is the deity, and the tabernacle of a hearth glows bright as pizza makers skillfully twirl each round into pie perfection.

Located on US 290 West, just before the city of Austin morphs into Dripping Springs, the barn-red restaurant has been drawing in devoted diners six days a week since opening in February 2013. (On Monday, “our dough rests” reads the sign at the door.) On any given day or night, the restaurant is animated with conversation from the diverse congregation within: families with kids, groups of teens, couples, sports teams, and business comrades. In the center of the dining room, those seated at the community tables often blend together like one big party.

“This is our passion, and we want Pieous to feel like our home,” says co-owner Paige Kaner. She met her husband Josh in the ’90s while working at Virgin Records in Los Angeles, and the two bonded over their shared love of food. “For our first date, Josh cooked me a five-course meal, all scratch-made, featuring his delicious penne arrabbiata,” she remembers with a smile.

Many meals later, Josh (then a CPA) and Paige (a music attorney) decided to leave the bustle of Los Angeles for Austin. Josh had already begun making Neapolitan pizza from a sourdough starter he had developed in California, and the couple’s home pizza parties continued in Texas. When a barbecue restaurant came up for sale just five minutes from their house, the Kaners decided to take a leap of faith, leave their careers, and pursue their passion for foodmaking by opening Pieous.

“The area was in desperate need of great, scratch-made food,” says Josh. “We wanted to serve our community and all our family and friends, and frankly, our home is not big enough for everyone!”

Josh gutted and redesigned the interior of the restaurant and found a way to use an industrial smoker that had been left behind—making pastrami. Being a natural-born perfectionist, he experimented with brining and smoking until he’d fine-tuned a winning recipe. Tender and flavorful, Josh’s house-made pastrami is sold by the pound, by the sandwich, or as a platter, accompanied by house-made sourdough bread, pickles, and mustard.

Despite its somewhat outlying location, Pieous has become a popular destination for Austinites and a necessary pit stop for anyone driving to and from the Hill Country. On a stretch of highway where you are more likely to see roadside barbecue joints or jerky shops, artisan Neapolitan pizza is a welcome— and unexpected—treat.

Pieous is one of only a few pizzerias in the state to hold Vera Pizza Napoletana certification, a denomination of control (DOC) established by the Italian government to regulate quality ingredients and traditional cooking style.

Signage bearing the VPN seal of approval and mounted over the wood-fired oven proclaims, “There are only 5 ingredients in our hand-mixed dough: flour, water, salt, yeast, and love.” Per tradition, each 12-inch pizza is baked at 900 degrees for just 90 seconds, resulting in a thin center and thicker, chewy crust, marked with the occasional charred bubble.

This past spring, the Kaners opened a bakery concept called Pie-é-Tea right next door to Pieous. Josh has now added French-style pastries to his repertoire, using the same sourdough starter used in Pieous’ pizzas and breads. The slate-blue structure features an oak-shaded patio and a window for ordering coffee and croissants, pain au chocolat, and other morning pastries.

“Being able to live our dream and achieving this level of success is very rewarding, but the most rewarding things are our customers’ support and how proud our children are of us,” says Josh. “It warms our hearts when our kids’ teachers tell us how much they beam when talking about all the yummy food their Mommy and Daddy make.”

After almost four years in business, the Kaners remain focused on their passion as new restaurants like Lox, Box & Barrel open their doors nearby. “The more food options, the better,” says Josh, who says their family has been known to eat pizza six nights a week. “Our kids would eat it everyday, but we are closed on Mondays!”