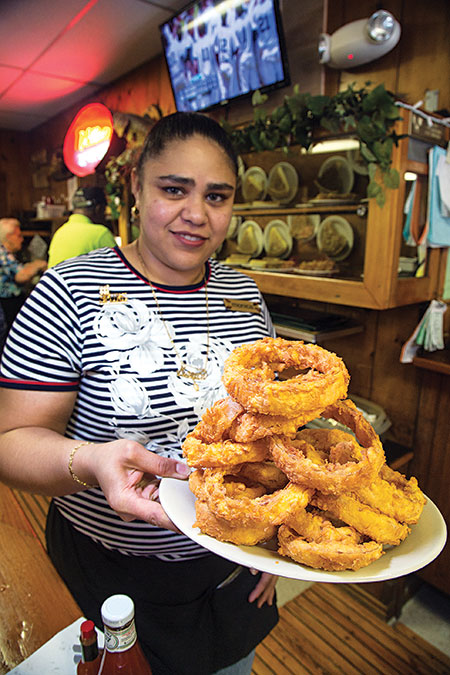 I hadn’t lived in Texas for very long before learning that “comfort food” takes on specific meaning here. A friend and I in San Antonio were looking for some dinner, and a resident rattled off nearby eats: pizza, Tex-Mex, and, of course, a comfort-food restaurant.

I wondered aloud what that would be, since different people derive comfort from different grub. The woman stared at me a second and puzzled, “Where are you from?”

Unpretentious Southern classics like grilled pimento-cheese sandwiches, fried-oyster sandwiches, and breaded chicken tenders bolster the menu, and, since it is San Antonio, a modest Tex-Mex sampling, including enchiladas and Frito pie, rounds out the offerings. For four decades, head chef Troy Wells has meticulously followed the same home-style recipes he learned as a line cook.

The Tip Top’s exterior is unassuming; the modest neon signage is the only clue that it’s a diner—unless the lunch-rush crowd queues out the door, as often occurs. A small metal sign by the main entry reads “Tip Top Cafe 1940” as though customers were at the portal of a time machine. And in some ways, they are. Upon crossing the threshold, diners are transported to an eclectic past. The walls are hung with various plaques and awards, menus dating to the days of 5-cent coffee, a tree’s worth of family portraits, historic black-and-white photos of the restaurant, and mounted bass and deer.

“If you look at us from the outside, you might not know what it’s like,” says proprietor Linda DeWese, founder John “Pappy” DeWese’s granddaughter, who has spent more than three decades working here. “People come in and see something they didn’t expect to see, it’s so old-fashioned. They sit down and have a good meal, and once you eat here, you’re part of the family.”

Preservation is Linda’s watchword. “We really haven’t made many changes here, maybe the drapes, but the bathrooms are still outside. The knotty-pine wall paneling is original. We used to have wonderful knotty-pine booths, but in the 1960s my aunt decided she wanted to update the restaurant and she put in these,” she says, sweeping her arm toward the vintage vinyl seating. “I would give anything to have my knotty-pine booths back.”

During the Great Depression, Pappy DeWese migrated to San Antonio from Dallas, landing a job at a root-beer stand on Fredericksburg Road, a stretch of motorway that rolled north out of town into the Hill Country. “Fred,” as locals still call the road, functioned as a military route during the Mexican-American War through World War I. In the 1920s, builders linked it to the Old Spanish Trail, the nation’s first paved southern transcontinental highway. When the federal government designated US 87 in 1935, it incorporated Fredericksburg Road as well.

The infrastructure was a boon to commerce, and opportunistic Pappy quit the root-beer stand, acquired a bar in 1938, and started plating up home-cooking for hungry laborers. The Tip Top has been part of Fredericksburg Road history since.

Many of the clientele belong to a silver-haired cohort of regulars who have been carving into the restaurant’s culinary classics for decades. Old-timers eat elbow-to-elbow with country-music stars and local politicians. But generational renewal is evident, too. Chance Kinnison, a 37-year-old native of San Antonio, says his parents used to take him to the Tip Top as a child, and he recently started going on his own. “I look for authenticity,” he says. “Some might say it’s the best chicken-fried steak, but also you know it’s been cooked the same way forever, and you know exactly what you’re going to get. The food is delicious.”

The Tip Top’s national profile rose in 2001, when a print ad campaign by ESPN featured San Antonio Spurs superstar Tim Duncan digging into pie at the restaurant. And since 2008, when Guy Fieri devoured the open-faced roast pork-and-gravy sandwich on the Food Network’s Diners, Drive-Ins and Dives, DeWese’s eatery has become a mecca for foodie tourists from Texas and beyond. It’s not unusual to see visiting Austin hipsters tweeting photos of their bodacious Tip Top entrées.

Anita Mueller, a septuagenarian who has waitressed at the Tip Top for 39 years, says, “People think I’m silly for not retiring and I say, ‘Have you ever seen our customers?’ That’s what makes you come to work, wondering: ‘Who are you going to see today?’”

Whoever they are, they’re certain to know the full savory meaning of Texas comfort food.