Who Wouldn’t Love a Buckarita in the Company of a Crossbred Longhorn-Buffalo?

Written by Art Williams, Photographs by Will van Overbeek | From the July 2018 issue | Updated: October 27, 2018 | Filed Under: DiningEat + DrinkHistory 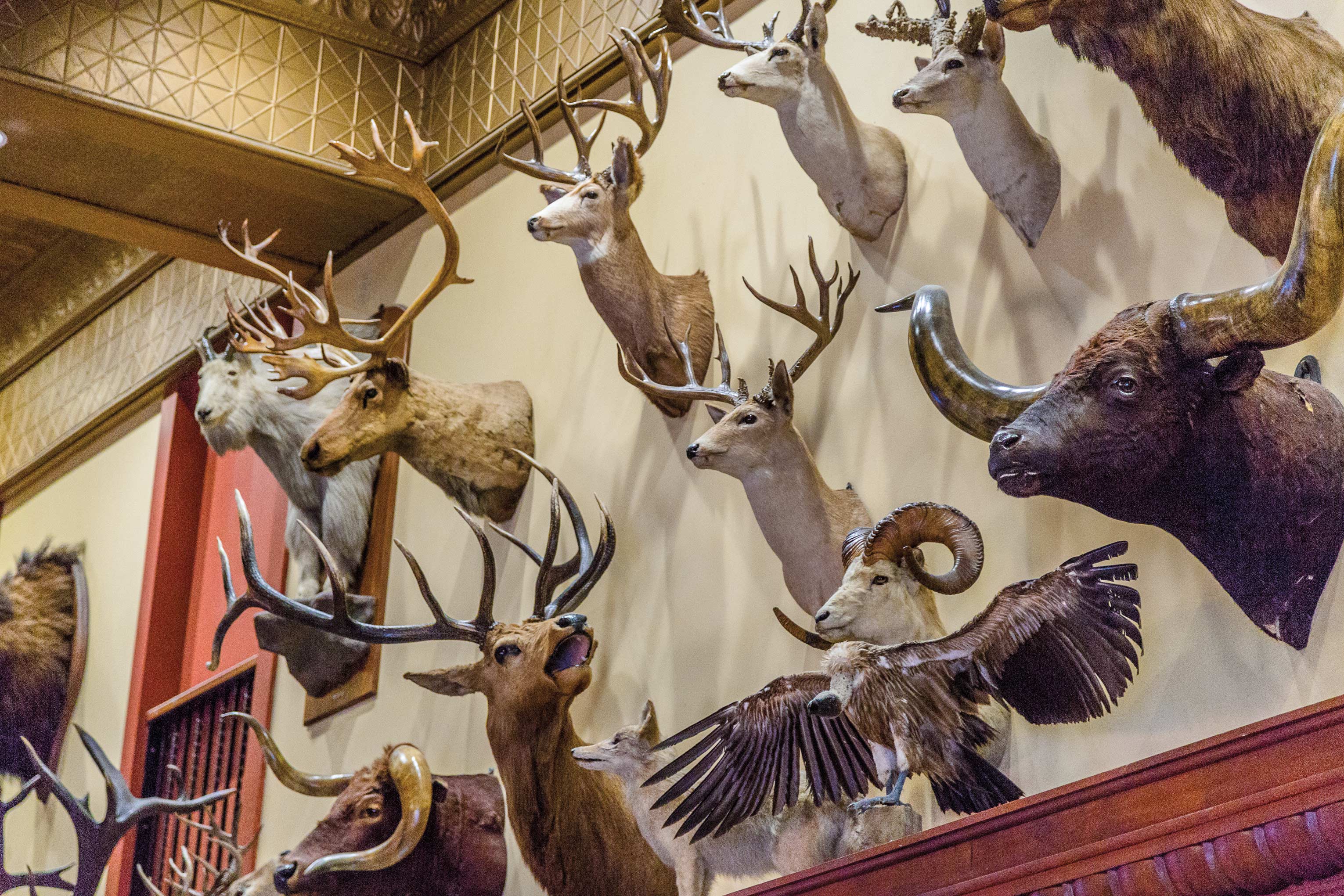 The “Buckarita” at San Antonio’s Buckhorn Saloon serves up the kick you’d expect from a mix of Cuervo 1800 Tequila, Grand Gala, and prickly pear juice. Looking around at all the horns, antlers, and stuffed critters on the saloon walls, however, an imbiber might fear their drink so potent that they’re seeing things. Not to worry, pilgrim. That beast mounted near the antique back bar that looks like a cross between a buffalo and a Longhorn? It actually is a crossbred buffalo-Longhorn.

The Buckhorn Saloon & Museum and Texas Ranger Museum
318 E. Houston St., San Antonio
Admission is free to the saloon and café
Museum tickets, which cover both museums, cost $20 for adults and $15 for children ages 3-11
210-247-4000
buckhornmuseum.com

Housed since 1998 in a former department store just two blocks from the Alamo, the 137- year-old Buckhorn is a whistle-wetting, vittles-wolfing stop steeped in history and lore. Two on-site museums chronicle the storied Texas Rangers and display the mounts of 500 wildlife species from around the globe. The atmosphere extends to the café menu, which includes the Texas Ranger Burger—a beef patty topped with pulled pork, barbecue sauce, onions, and Swiss cheese—and the Cowboy Plate piled with sausage and barbecue pork. Even the leaner fare gets into the act, like the Wild West Chicken Fajita Salad. And the firewater department really lives up to the legend.

One item on the menu, the Happy Burger—double meat with cheddar, Swiss, and American cheeses—is a tribute to owner Wallace “Happy” Rogers III, the great-grandson of founder Albert Friedrich. In 1881, 17-year-old Albert, a bellhop and bartender at the Southern Hotel on Main Plaza, opened a saloon on Dolorosa Street. Finding that cowboys and other patrons were sometimes short on silver for their suds and rye, Albert initiated a barter system, accepting antlers and horns as payment for libations. An avid hunter himself, he began adding taxidermy specimens to the collection, the roots of the Buckhorn Museum. 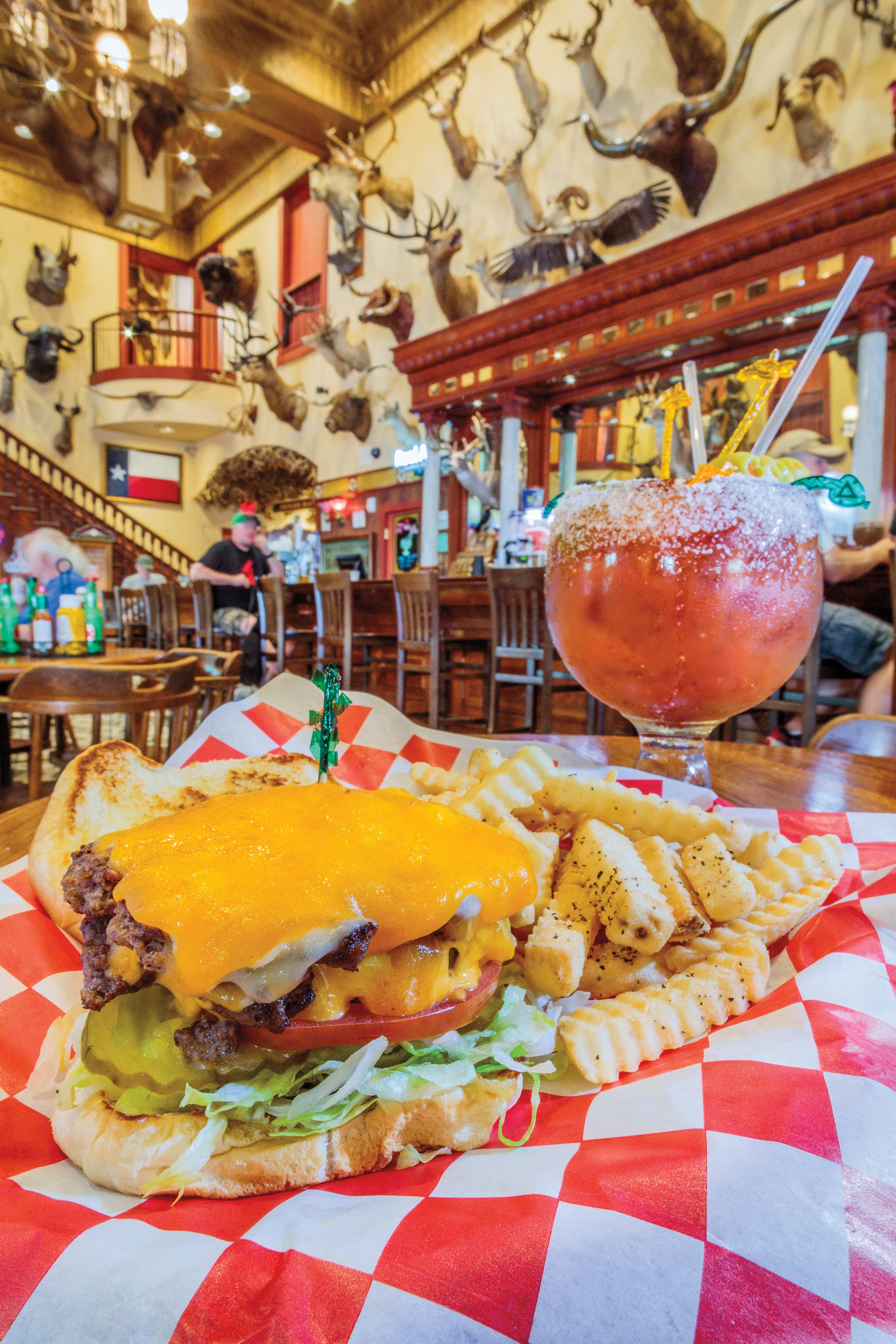 At the Buckhorn Saloon and Museum, burgers and Buckaritas offer fortification for a tour of galleries that display 500 mounted beasts.

After Albert married in 1891, his wife, Emilie Friedrich, got into the act by trading whiskey shots for jars of rattlesnake rattles. She eventually collected some 32,000 diamondback tailpieces, applying them to signs and artwork displayed in the Buckhorn. The saloon moved several times, surviving Prohibition by temporarily becoming a curio shop and soda fountain. The Friedrichs’ son and daughter ran the saloon until 1956 when the collection was sold and moved to the grounds of Lone Star Brewery, where the Buckhorn served as a hospitality and sampling room. When Stroh Brewery Co. bought Lone Star in 1998 and moved its production to Longview, Albert and Emilie’s granddaughter Mary Friedrich Rogers and her husband, Wallace Rogers Jr., bought the collection and moved it to its present location at Houston and Presa streets, where today their son Rogers III continues the family tradition.

Finding that patrons were sometimes broke, Albert initiated a barter system, accepting antlers and horns as payment for drinks.

A tour of the Buckhorn Museum, which is both adjacent to and upstairs from the saloon, takes visitors through several halls devoted to the saloon’s history and wildlife from Africa, Asia, Europe, Australia, and North America. The Texas Hall features horn furniture made by Albert’s father, Wenzel Friedrich, a notable craftsman in his own right. “They may not look like it,” says Bevin Henges, the Buckhorn’s director of sales and marketing, “but the chairs are very comfortable.” A mannequin of Teddy Roosevelt stands beside a chair made from buffalo hide and horns, a Wenzel original similar to one he presented to Lt. Col. Roosevelt. Teddy had come to San Antonio in 1898 to recruit galoots for his Rough
Riders force. He knew the most hell-for-leather Texans would likely be found in watering holes, so he acquainted himself with the Alamo City’s finest. Teddy stands beneath a portrait of a deer Emilie created with 637 diamondback rattles as a tribute to Roosevelt.

An extensive display documents the career of San Antonio big-game hunter Bill Negley, a businessman who donated part of his collection to the Buckhorn before his death in 2006 at age 92. Three of Negley’s record-breaking catches from the 1950s and ’60s are preserved in the Hall of Fins. The outdoorsman’s bluefin tuna weighed in at 614 pounds, and his black marlin broke the era’s record at 1,056 pounds.

The Alaskan Hall is home to the fossilized head and antlers of the Buckhorn’s rarest specimen—an extinct, prehistoric Irish elk. These ancient beasts could grow to 7 feet tall at the shoulders, making them the largest known deer species.

Emilie traded whiskey shots for jars of rattlesnake rattles, collecting some 32,000 tailpieces and applying them to signs and artwork displayed in the Buckhorn.

Whitetail deer oddities include antlers intertwined in a “death lock,” the tragic result of two fighting deer unable to disentangle their horns. There are also the mounts of two does that grew antlers, and the antlers of the famous 78-point “Brady Buck,” hunted in McCulloch County in the 1890s and mounted in the saloon above the mirrored back bar from the original Buckhorn of 1881.

Back downstairs, the 8,000-square-foot Ranger Town re-creates 1900 San Antonio with scaled-down storefronts that include a replica of the Buckhorn. The adjacent Texas Ranger Museum honors the storied lawmen with displays of boots and saddles, firearms, badges, and other artifacts from the careers of John “Border Boss” Hughes, Frank Hamer, and many more. The display about Ramiro “Ray” Martinez, one of two officers who took down The University of Texas Tower shooter Charles Whitman in 1966, includes a copy of Life magazine with “The Texas Sniper” on the cover.

Signage encourages visitors to “exit through the gift shop,” where you can pick up a gen-u-wine Texas Jackalope. Visitors from around the globe have carried home quite a few of the cryptozoological critters. “I’ve met people here from India, Iceland, New Zealand, all over,” bartender Martinez says. “We have a group from Scotland that comes once a year. They have their own ‘Texas bar,’ and they come to the Buckhorn to see how it’s done.”