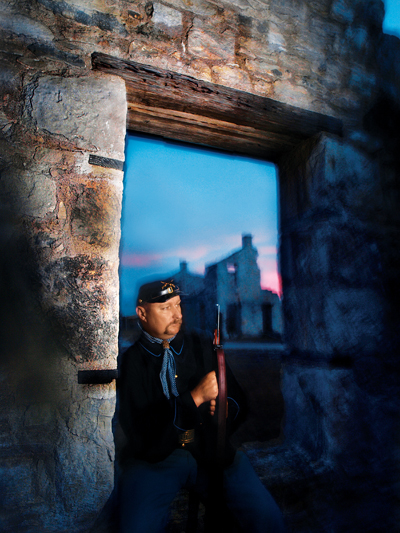 “The prettiest post in Texas” is how General of the Army William Tecumseh Sherman described Fort McKavett in 1871. Still meriting Sherman’s designation 138 years later, Fort McKavett State Historic Site perches above the San Saba River in Menard County on a grassy hilltop. Its 16 completely restored, whitewashed-limestone barracks, hospital, and headquarters (several other buildings are partially restored or in ruins) comprise what has been called the best preserved, most intact example of a Texas frontier fort.

In the quiet that surrounds Fort McKavett, it’s easy to imagine bugle calls, the creak of saddlery, and the snort of horses. It looks like the 600 soldiers posted here and their families moved out only yesterday.

Fort McKavett was a link in a chain of frontier forts—including forts Chadbourne, Belknap, Mason and Phantom Hill—that protected Western travelers and settlers. Fort McKavett soldiers escorted wagon trains and mail coaches, scouted the region, and built roads and telegraph lines. Patrols of 15 to 25 soldiers rode out for several days to a few weeks at a time, sometimes skirmishing with hostile raiding parties, but never fighting in large-scale battles.

Built in 1852 by the 8th Infantry near the source of the San Saba River, and set on the San Antonio-to-El Paso road, Fort McKavett was originally named Camp San Saba. Soldiers quarried nearby stone and felled oaks for the fort, which was renamed for an officer in the Mexican-American War. Abandoned in 1859, when the region appeared peaceful, Fort McKavett was reopened in 1868, and rebuilt and expanded in 1869, by General Ranald Mackenzie’s troops when the Army resumed its protection campaigns after the Civil War.

No palisades surround the fort. Visibility from the elevated site precluded attacks, according to Colonel Richard McTaggart, founding president of Friends of Fort McKavett and a retired U.S. Army officer.

McTaggart’s ancestors took shelter in the temporarily abandoned fort in 1866, when they arrived in the San Saba area. His mother witnessed the wagon train that transferred remains from the fort’s cemetery after the post closed. And, as a child in 1937, McTaggart took part in a spelling bee in Fort McKavett’s one-room school. Many years earlier, that school had conducted classes for the fort’s African-American soldiers, who were promised an education as part of their enlistment agreement.

The black troops of Fort McKavett’s Tenth Cavalry were the first to be called Buffalo Soldiers by the Comanches, in reference to their buffalo-like tenacity. Companies of all four Buffalo Soldier regiments were stationed at Fort McKa-vett during its heyday. The segregated units of Buffalo Soldiers did the same work and received the same pay and honors as their white peers. One African-American soldier stationed at Fort McKavett, Sgt. Emmanuel Stance, saved a wagon train under attack. For his bravery, Stance was awarded the Medal of Honor, the first African-American so honored after the Civil War.

A self-guided walking tour starts at the high-ceilinged post hospital, ingeniously ventilated by a system that draws cool air in from open windows and expels it through a long cupola. The interpretive center here uses photos and artifacts to present the routines of everyday life at the fort—hauling water barrels from Government Springs, preparing mounted patrols to ride out, unloading wagon trains from San Antonio (seven days away) piled with tobacco and other supplies.

The Dead House, or morgue, displays primitive medical equipment and describes concoctions laced with cocaine, opium, or morphine, which were used to treat illnesses. Fort McKavett surgeons amputated limbs for frostbite, gunshot wounds, and dislocations in those days before antibiotics. On Officers’ Row, where bachelor and married junior officers lived, an officer’s portable desk, folding chairs, and a thin railing six feet above the floor-for hanging coats and pictures-reveal a nomadic existence. Three rooms accommodated a senior bachelor officer, while two adjacent rooms provided a cozy if frugal lifestyle for a more junior officer and his family.

The Army preferred that wives not live on frontier posts, though, and a junior officer’s family could be bumped from a house to a tent if a senior officer wanted the space.

Most enlisted men and their families lived in tents or huts in contrast to the spacious, multi-windowed ranking captain’s quarters, which is decorated with 1870s luxuries like a piano and a stereopticon, or “magic lantern” slide projector. Spurred cavalry boots stand in the front hall, and mosquito netting hangs over a bed. The window shutters kept varmints out at night, but not the breeze. Other quarters display surveyors’ instruments, rock samples, and an arrowhead collection. One crumbled barracks, which could house 300 men during the fort’s heyday, was the longest barracks in the Texas fort system.

The view from the fort’s para de grounds has barely changed through the years—no power lines or communications towers intrude on the past. But the yucca, horse crippler, hoarhound, and bluebonnets that now dot the parade grounds in season would never have grown where troops assembled for meals and drills.

Fort McKavett functioned like a small village. As a regimental headquarters, it had military bands for entertainment. The bakery turned out several hundred loaves of bread daily, for soldiers’ suppers often consisted only of bread and coffee after a large midday meal. The San Saba River irrigated a 31-acre garden and the horse pasture. A blacksmith, laundresses, tailors, and stable hands helped sustain the community, while a guardhouse confined the disobedient. Outside the fort, a settlement known as Scabtown offered saloons, gambling halls, and other diversions in exchange for the soldiers’ meager pay.

The Army withdrew from Fort McKavett on June 30, 1883. As Company D, 16th U.S. Infantry marched away, the residents of Scabtown moved into the sturdy buildings. Their occupancy of the fort until 1968 kept it from falling into ruins.

When you visit the fort, be sure to explore the old cemetery, which lies a half-mile away. At its center, a grassy area without markers is the resting place of several soldiers, family members, and civilians that the Friends of McKavett identified from post records.

Isolated now as then, Fort McKavett State Historic Site shares its unsullied night skies with amateur astronomers at star-gazing parties. Just think: Under the same view of distant stars, the soldiers of another century listened to the bugler playing “Taps.”