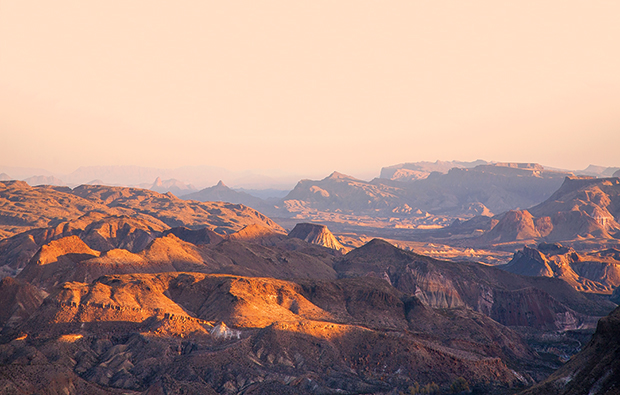 Backcountry aficionados flock to the largest state park in Texas, Big Bend Ranch State Park, to explore its rugged 315,000 acres on horse, bike, or foot—usually in splendid isolation. But visitors seeking both a wilderness adventure and a cozy place to call home will find it at Sauceda Ranger Station, located in the center of the park. There, the Sauceda Bunkhouse, a former 1960s hunting lodge, offers dorm-style lodging and close proximity to spectacular trails, natural springs, and the darkest night skies in Texas.

Reservations for the Sauceda Lodge Bunkhouse and Historic Sauceda Ranch House (when it reopens after renovations) can be made through the park website or by calling 512-389-8919. Sauceda Ranger Station is just outside of Presidio at 1900 Sauceda Ranch Road.

For additional details about the area, see visitbigbend.com.

Curious about what wildlife you might see at Big Bend Ranch State Park? Writer Amanda Ogle gets the scoop.

Originally called “Saucita”—Spanish for the willows that once grew in a nearby spring-fed arroyo—Sauceda has a ranching heritage dating to 1905, when George A. Howards originally settled the land. Ranch ownership changed hands several times over the decades until the Texas Parks and Wildlife Department purchased the land and established a state park in 1988. The historic structures within the complex once supported ranch operations, and today they provide park housing, maintenance facilities, and visitor lodging. In addition to the Bunkhouse, the historic “Big House,” which is closed for renovations for the foreseeable future, will offer lodging for up to eight visitors when it reopens.

I headed to Sauceda for a three-day solo getaway last February. Seven hours after leaving Austin, I fueled up one last time in Presidio, rounded the curve onto FM 170, and then turned off onto the unpaved Casa Piedra Road toward the park. Park staff members maintain the 27-mile dirt road to keep it smooth and accessible by most urban vehicles, but they recommend calling ahead to check road conditions.

Driving through the park is like hurtling millions of years back through time with each passing mile. Volcanic lava painted the landscape 27 million years ago, creating the Bofecillos Mountains in this region of the park and the surprising yellowish hills of tuff (fused volcanic debris) visible from the road at about Mile 15 as you’re driving east. Other geological events occurred in other quadrants of the park over the course of 500 million years, providing dramatic changes of scenery and lots of natural diversity to explore.

]I arrived at Sauceda just before 6 p.m. closing time and checked in at the Bob Armstrong Visitor Center, named for the former Texas Parks and Wildlife commissioner who advocated for the original park land purchase. Before going, be sure to check out the park website for visitor information and guides, along with downloadable brochures about the fascinating geology and history of the park, where Native Americans, cinnabar miners, candelilla wax smugglers, and ranchers once roamed. The Sauceda Ranger Station also provides park information, including a water-resistant map that folds neatly into a hiking pack.

Upon entering the Bunkhouse I felt right at home, thanks to the ranch-style décor, leather couches and chairs, fireplace, and Wi-Fi. The dorm area sleeps up to 30 and is divided into men’s and women’s quarters with 15 twin beds on each side and a roomy bathroom with two showers. The dining facilities include six tables and a spacious kitchen for guest use with two refrigerators, two cooking ranges, a commercial sink, and two microwaves. Air-conditioning units and swamp coolers keep the Bunkhouse comfortable in the hot Texas summers. On this trip, I had the Bunkhouse to myself, but as I made dinner that first evening, I was already planning a return trip in cooler months to enjoy the spacious quarters—and the wonderful fireplace—with a group of friends. 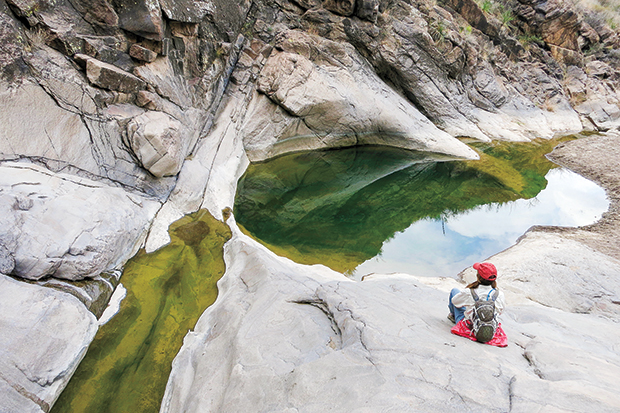 In the morning, I scrambled some eggs and brewed coffee in the smaller of two coffee pots that were provided. Feeling like a rancher after a hearty breakfast, I headed out to meet Kirsten Thorburn, a volunteer park interpreter, for a 1.5-mile round-trip hike to Cinco Tinajas, which translates roughly to “five pools.” (A tinaja is a sheltered, erosional rock feature that holds water.) The trailhead is about 2 miles from Sauceda along the main park road. “This is one of the few areas of the park where you’ll usually find water year-round,” Kirsten explained. “The diversity of plants and animals in this area depends on it.”

As we hiked to the lower tinajas, it was apparent that people had gathered at this desert oasis for thousands of years. We passed bedrock mortars used for grinding, prehistoric art sites, and an ancient cooking site. We meandered along the creek bed past lush riparian grasses. Finally we reached the lower tinajas and shimmied up the slick rock to relax in the shaded serenity by the water. With more time, we could have continued on to hike the 3-mile Leyva Escondido Spring Loop.

Later that day, I packed a snack and plenty of water and headed out with Interpretive Ranger Amber Harrison to hike to the Fresno West Rim Overlook via the Puerta Chilicote trailhead. Amber and I chose the 5-mile round-trip version of the hike; this little-known gem is one of the park’s most rewarding day hikes, and the trailhead is only 4.5 miles from Sauceda along two-wheel-drive roads.

In 2011, I had been part of the trailbuilding team that marked the route, and I was eager to try it out as a visitor. It was windy, so I tightened my baseball cap and set out with Amber across ancient lava flows that make up the desert terrain, guided by cairns and the occasional directional sign. “The park placed these signs at ambiguous trail junctures,” Amber explained. “We wanted to maintain the natural character of the trail while also making it easy to follow.”

After about an hour, the world opened up to us at the 700-foot vertical drop-off into Fresno Canyon. We had reached the overlook. Holding on to our hats in the wind, we gazed out at the brooding Solitario, a 10-mile-wide, collapsed volcanic dome that is one of the park’s signature geological features. Its southwestern rim is strikingly picturesque, thanks to violent volcanic activity 2 million years ago that pushed the rocks upward into a row of V-shaped rocks known as the “flatirons of the Solitario.” We hiked along the ridge for a while longer, taking in the stunning views before returning to the trailhead.

I still had two more days to explore the fabulous trails near Sauceda. One day, I hopped on my mountain bike to ride the Encino Loop Trail, a 12.3-mile loop. I also hiked the short but sweet Sauceda Nature Trail, with its signs identifying the desert plants along the way. One evening before sunset, I hiked along Horsetrap Trail through an old horse pasture from the ranching days and up onto a mesa overlooking Sauceda and the distant mountains.

On my last day, I stopped at the Ojito Adentro trailhead for one last hike. Hiking into a dense grove of cottonwoods, I found a riparian zone touted as one of the park’s top birding sites. Surrounded by willows, ferns, grasses, and pools of spring water, I was glad I had taken the time for this final stop. In the desert, as in life, you have to look closely to find the treasures.