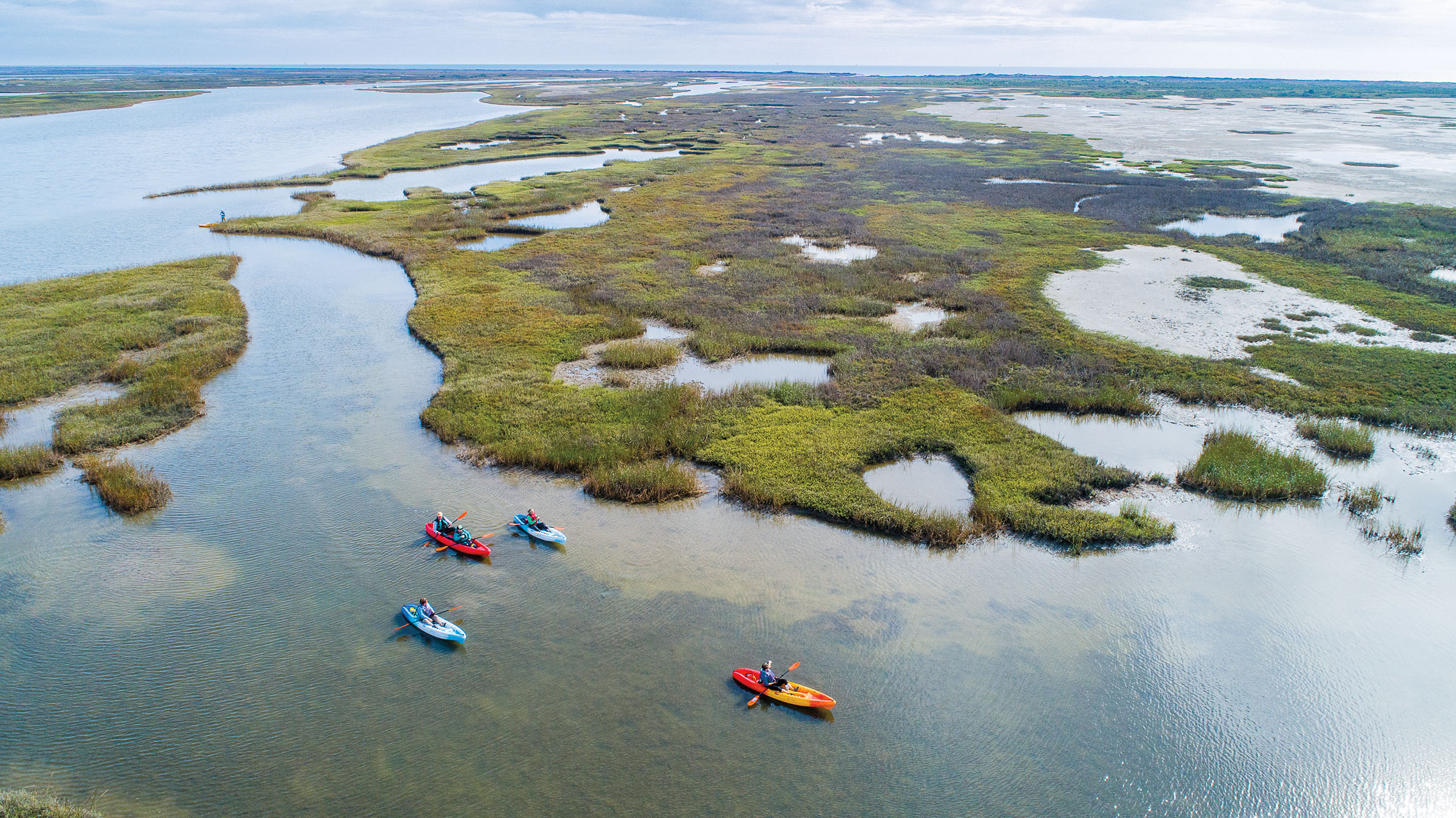 The kids were darting in and out of the surf at Matagorda Beach, filling buckets of water to pour into their sandcastle moat, when my 9-year-old daughter approached me with a thought. “I’m so glad I was made a human,” she said amid the rumble of roiling waves. “Or else life would be so hard.”

She looked at the sea gulls flapping overhead and willets hopping across the beach, their piercing eyes on the hunt for minnows, shrimp, and crabs. “All the little sea creatures have to hide in holes or they might get eaten. I’m not going to get eaten by anything.”

Apparently, our visit to Matagorda Bay Nature Park had made an impression on the girl. Over two days last July, we learned about the animals and ecosystems that characterize this swirl of ocean, river, and wetlands where the Colorado River flows into the Gulf of Mexico. The Lower Colorado River Authority owns the 1,300-acre park, which offers visitors access to camping, fishing, paddling, and relaxing on an uncrowded stretch of coastline and riverbank. For kids, there’s an educational nature center, a miniature golf course, and an engaging lineup of activities that illuminates the coastal environment.

For my family of four, an excursion to Matagorda Bay Nature Park meant a diversion from the midsummer doldrums—a reprieve from the temptations of screen time and air-conditioned inertia. It was also a chance to explore a part of the Texas coast with a more primitive character than well-known destinations like Galveston and Port Aransas.

“We don’t have much commercialization, so you have a lot more nature to explore,” said Paige Leadford, the program coordinator at the park. “It’s really nice for families to come visit because of how quiet it is. You’ve got a lot of space to spread out and a variety of things to do.”

This free and easy vibe comes with an adventurous edge. Matagorda Bay is raw country, windy and muggy, with riptides that make it too dangerous to swim at the beach adjacent to the LCRA park. But don’t fret: Swimming is safe at other Matagorda County beaches within a couple of miles.

Matagorda Bay Nature Park sits on a peninsula separated from the mainland town of Matagorda by bays and wetlands. The final approach to the peninsula sets the scene for this excursion far better than any filmmaker could. After crossing a tall bridge spanning the Intracoastal Waterway, Farm-to-Market Road 2031 traces a narrow delta 6 miles long, with shallow marshes to the east and the Colorado River to the west. It’s a captivating drive. The first time I drove the road, the fog was so dense I couldn’t see anything but watery ditches on either side of the blacktop. I was genuinely worried I might not see the ocean ahead until I was in it. On another occasion, I spotted an alligator bobbing in the grassy marsh, just feet from the road.

Until about 100 years ago, people had to wade or boat across these wetlands to get from Matagorda to the peninsula—at that time a barrier island—and onward to the Gulf of Mexico. Then, after decades of attempts, engineers finally cleared a logjam 10 miles upstream on the Colorado, which washed massive amounts of debris downriver, creating the delta. By bridging the barrier island and the mainland, the delta transformed the island into a peninsula.

Matagorda, population 500, is home to basic provisions, a harbor that draws serious anglers, and a few places to eat (the Waterfront Restaurant offers a tasty broiled flounder and views of the harbor). This little town has moved at its own pace for a long time. Stephen F. Austin directed its establishment in 1827, and as the nearest port to New Orleans, marshy Matagorda Bay was many a
pioneer’s first view of Texas. The town remains an unheralded cache of historical relics, including the 1829 Matagorda Cemetery, the 1832 Stanley-Fisher House Bed and Breakfast, and the 1838 Christ Church, which is the state’s oldest Episcopal Church.

The LCRA has worked to make Matagorda Bay Nature Park a destination in its own right. The park’s campground offers 68 grassy sites with hookups, as well as bathrooms, showers, and laundry machines. But if you don’t own a camper or don’t want to tent-camp, your best option is one of the park’s shiny Airstream trailers—two 26-foot Flying Cloud models nicknamed Ruby and Ranger. These air-conditioned marvels sleep four and include an equipped kitchen, bathroom, shower, and fridge. During downtimes, my kids busied themselves exploring Ruby’s ingenious storage nooks while my wife and I drank coffee on the front porch with views of the Colorado River and a fishing pier just yards away. 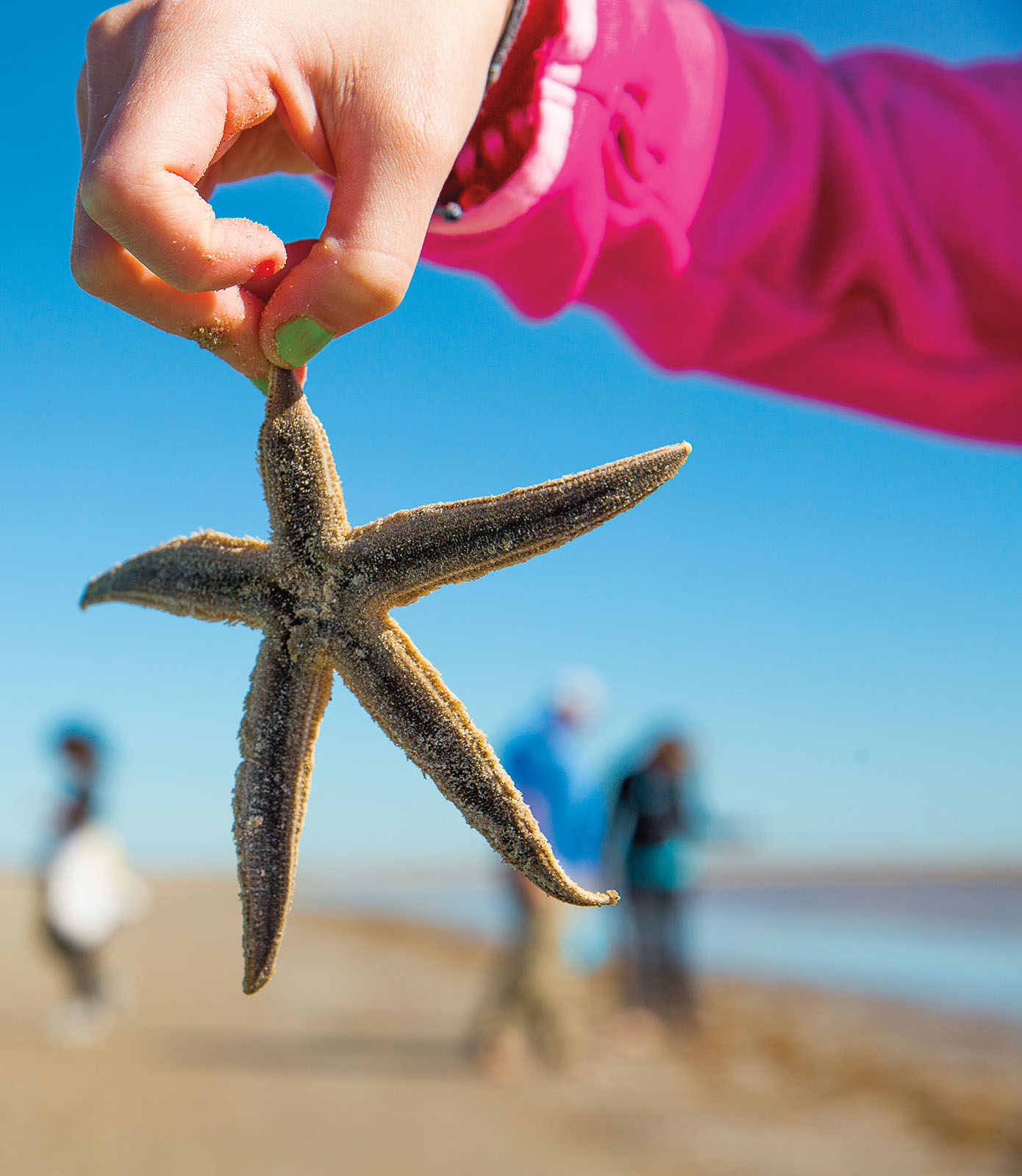 It’s a short walk from the campground to the nature center, where kids can get completely wrapped up in the hands-on exhibits. Displays like an aquarium, replica animal skulls, spotting scopes to view the landscape, and the body of a baby blacktip shark educate about local wildlife. The most popular draw is the touch tank, an aquatic exhibit where kids can handle the same live creatures found on the beach, like hermit crabs, blue crabs, and clams.

The nature center is a prelude to the park’s organized programs. The park schedules programs for the general public on most weekends and hosts groups such as Boy Scout troops and school classes for programs throughout the year. The park canceled this year’s summer camps—offered for children ages 5 to 15—because of COVID-19.

“Even people who have been down here year after year, sometimes they don’t know half the stuff that’s here,” Leadford said. “Our goal is to educate the public about the different animals and habitat, and to share the importance and beauty of it with everybody so they’ll help us take care of it.”

During our trip, Leadford gave us a special tour to get a sense for the range of programs. On one outing, we divvied up into two-person kayaks to paddle across the mouth of the Colorado River to an undeveloped beach dotted with treasures reflecting the hidden life swirling just offshore. Among the driftwood, we found graceful, spiraling lightning whelks, the state shell of Texas; pumice from underwater volcanoes; and polished seeds, known as “sea beans,” from as far away as Brazil. Flotsam like flip-flops, fishing nets, and plastic refuse torn with the diamond-shaped bite marks of sea turtles reminded us of humanity’s toll.

On another beach outing, we dug recalcitrant mole crabs and ghost shrimp from the sand; scooped minnows from the surf to examine their natural shades of camouflage; and peered into pecan-sized shells as panicked hermit crabs cowered inside. At dusk, we roasted marshmallows over a beach campfire and then used flashlights to spot ghost crabs skittering across the sand as they scavenged for clams, fish, and scraps.

“It’s a survival tactic,” Leadford explained. “The crabs stay hidden in their burrows during the day to protect themselves from active predators like the birds. They’ve adapted to living in this environment and the obstacles they face.”

These were the challenges occupying my daughter’s mind as we played on the beach before making our way home. A steady coastal breeze whipped across the cloudless sky as my kids employed some of their newly learned biology skills, digging for crabs and protecting them by chasing off pesky sea gulls. At Matagorda Bay Nature Park, we’d discovered both a rich sanctuary for wildlife and a new perspective on survival. I smiled at my daughter’s ruminations about her own humanity. What better takeaway from a family trip than a renewed appreciation for life?