The New Reality of Destructive Wildfires in the Texas Panhandle 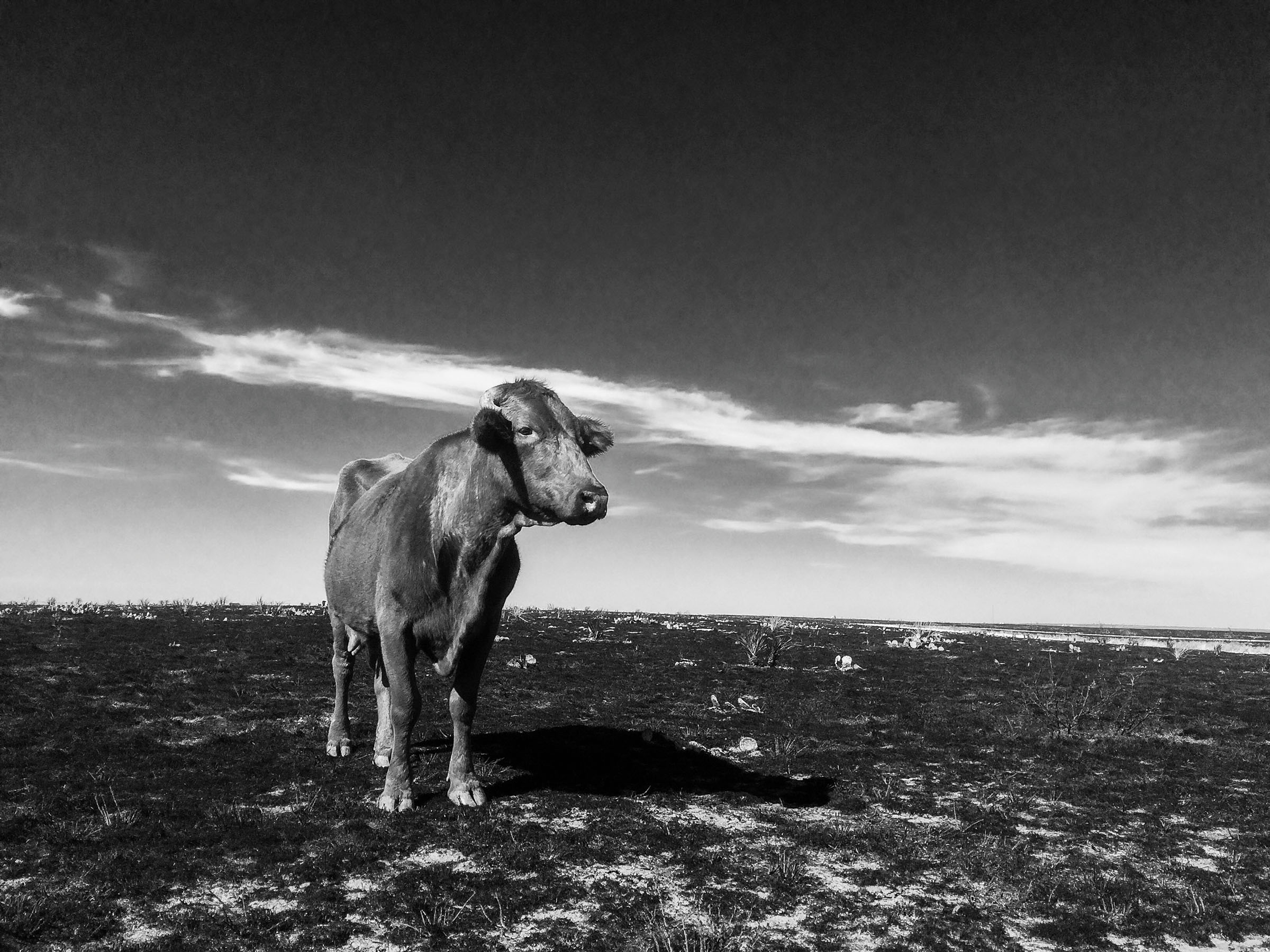 After the Perryton fire, ranchers relied on imported hay to feed surviving livestock like this cow on the M-Cross Ranch.

The winds were gusting across the Panhandle when I got the phone call on March 6, 2017: An electric line had blown down and started a fire on a neighboring ranch west of our place in the Canadian River valley. I stepped out the back door of the house and saw a cloud of smoke above the canyon rim, moving rapidly over the flat country. I rushed inside to notify my wife, Kris.

We weren’t in the path of the fire yet, but our house sat in a deep canyon north of the river—and there was only one way out. We needed to evacuate. I glanced around the house. What do you take? Kris picked up her mandolin, and we both grabbed our laptops—mine contained all my writing files, including five unpublished Hank the Cowdog books.

We pointed our Ford Explorer out of the canyon and continued north toward Highway 281. When we got to the top of the caprock, we saw a huge cloud of dark smoke ahead of us. The wind was screaming out of the west, pushing the fire across 8 miles in about 20 minutes. The highway disappeared inside the towering cloud. We paused a moment and took a few pictures—snapshots from one of the worst days of our lives.

When March rolls around, people in Central Texas start thinking about wildflowers. Up here in the Panhandle, we’re worrying about wildfires. This year marks the fifth anniversary of the Perryton Fire—named for the nearby town—that burned 318,000 acres, making it the third largest in Texas history. The blaze was one of 32 wildfires that day in Texas, Oklahoma, and Kansas that collectively burned 1.3 million acres. The devastation included seven deaths, five injuries, 1,500 miles of burned fencing, 87 lost structures, and between 9,000 and 10,000 dead cattle.

We stayed the night in a small duplex in Perryton. During the night, the wind shifted, pushing the fire into the Canadian River valley. Our son Mark, who lives in Amarillo, established phone contact with a firefighter on scene. After hearing his account, Mark made the two-hour drive west, fearing the worst. He arrived late that night to find the whole valley ablaze.

Early the next morning, he called us. “Mom, Dad… I have terrible news. The house is gone.” So were the bunkhouse, my writing office, 15 miles of fence, and 90% of our pastures. Incredibly, our cattle survived—how I don’t know—but they were left with nothing to eat. 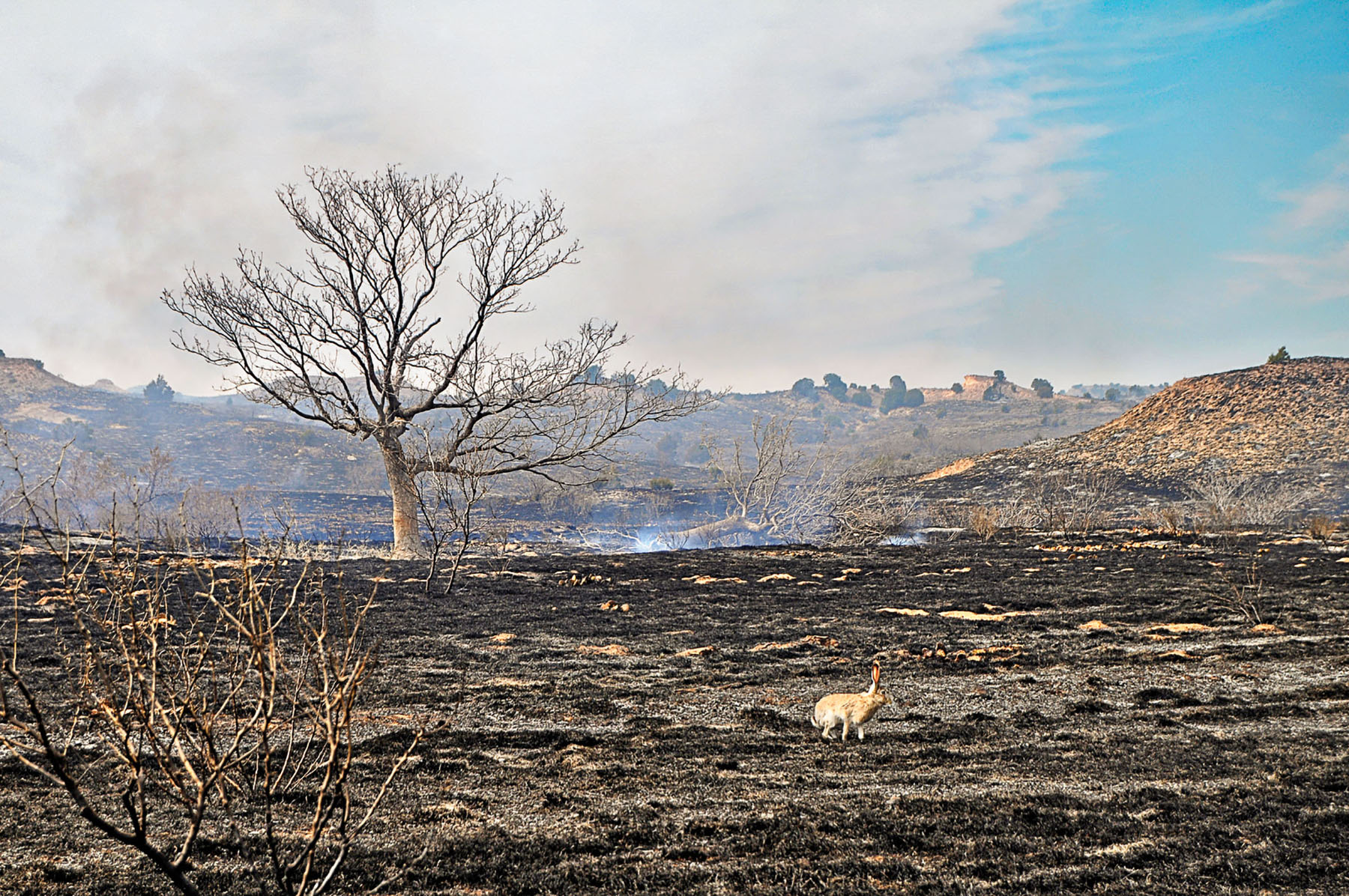 A jackrabbit on a charred pasture 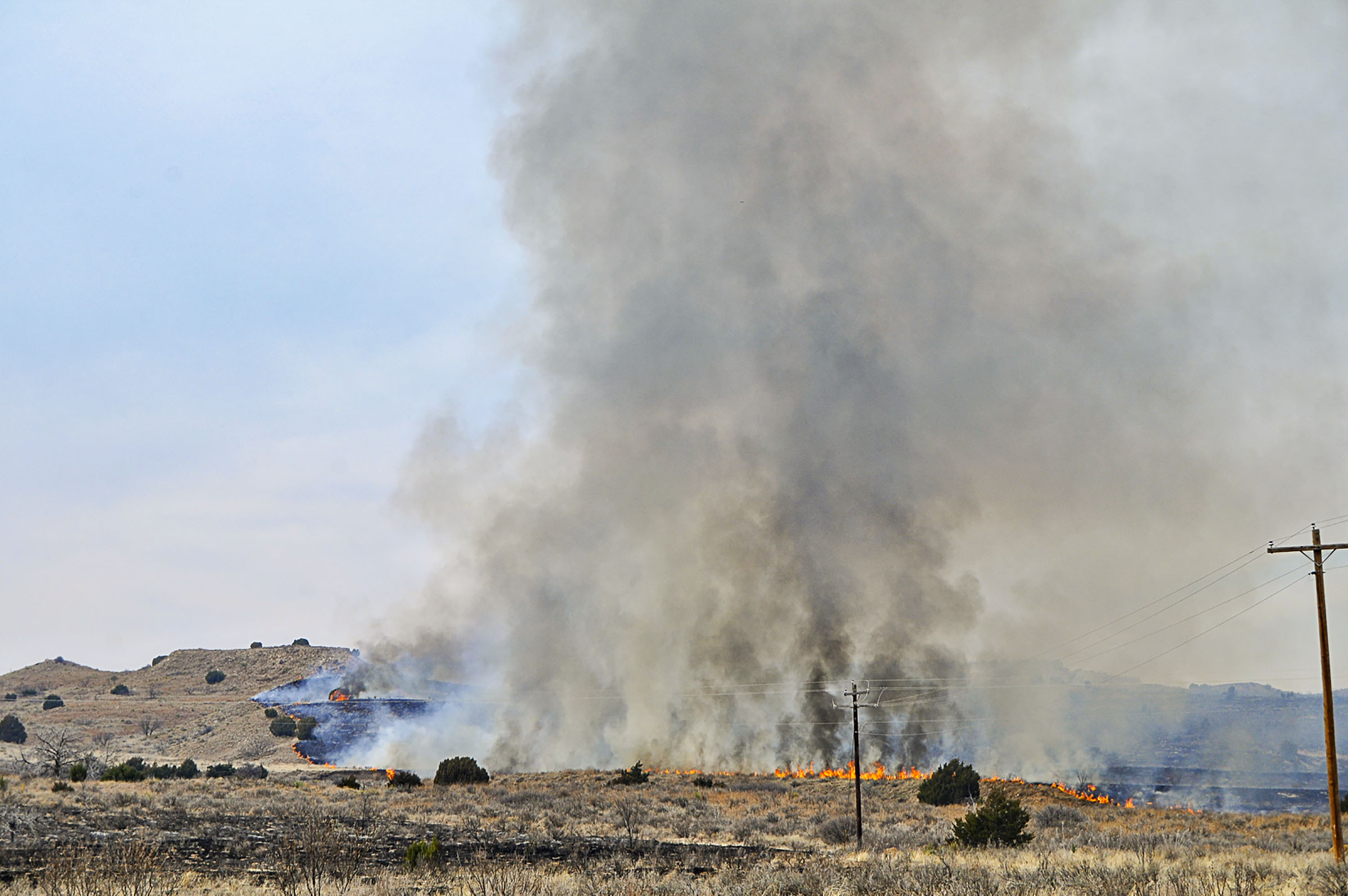 A spot fire on the ranch

In 1990, I had saved up enough cash to make a down payment on those 5,700 acres of rough canyon country in Roberts County—one of Texas’ least-populated counties with 924 square miles and only about 850 people. It has only one incorporated community—the county seat of Miami, with a population of 500.

I named the ranch the M-Cross after my great-grandfather’s brand, which he registered in Crosby County in 1887. For the next 27 years, the ranch and I suffered together through every dry spell and shared the joy of every drop of rain.

Located on the north side of the river valley, the M-Cross is where the flat prairie drops suddenly into canyons 300-feet deep. It’s not the best grass-growing ranch in the area, but to my eyes, it’s incredibly beautiful—a cowboy’s dream. And it turned out to be a great place to write Hank the Cowdog books.

We lost just about everything in the fire, including 10 of Kris’ handmade quilts, her scrapbooks and family photo albums, our library of thousands of books, and several filing cabinets filled with manuscripts, personal papers, and all my letters from three legendary Texas authors: John Graves, Elmer Kelton, and J. Evetts Haley. They were personal friends who helped light my path as an author.

We were knocked flat, as were many other ranchers. But disasters bring out the best in our species. People from our Methodist church in Perryton rushed in like angels with clothes, sheets, towels, food, and furniture. Truckloads of hay, feed, and fencing poured into drop-off points in Canadian, Lipscomb, and Wheeler. Five days after the fire, our son Scot brought a crew of 25 volunteers from Amarillo with heavy equipment and hauled off the corpses of our home, bunkhouse, and office.

Within three months, we were back on the ranch, living in a modular home. Scot had found a modular office to replace the one that had burned. Kris and I weren’t sure we had the will or energy to rebuild on the location of our old home, but the boys insisted we should. And we did. It took 39 months for us to get back home. 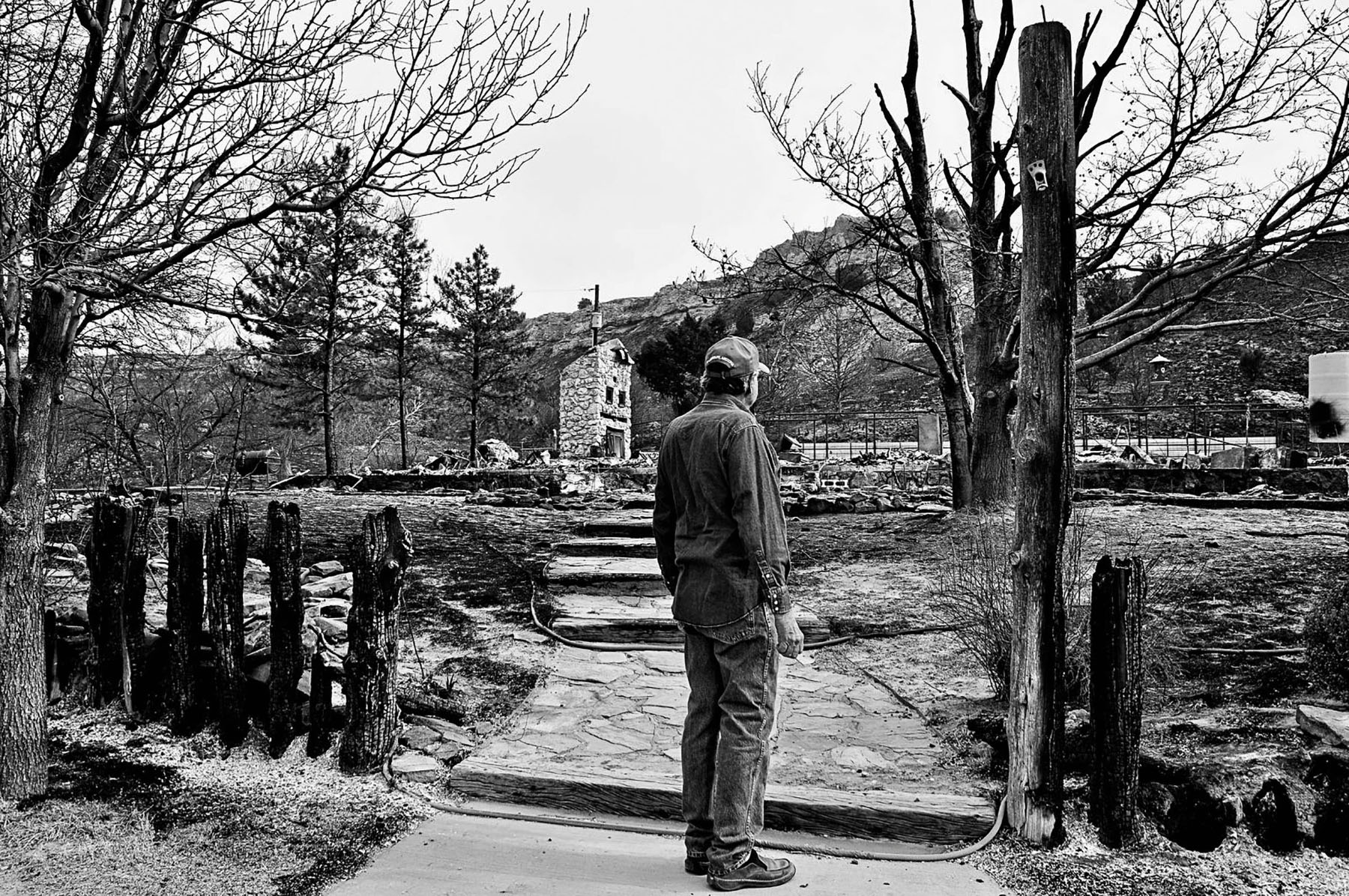 While the 2017 fire was devastating, it wasn’t the first wildfire to threaten the M-Cross Ranch. In March of 2006, two massive blazes known as the East Amarillo Complex fire burned near us for five days, forcing us to evacuate. The fires scorched nearly 1 million acres of grassland, jumping the Canadian River, and coming within 400 yards of our fence.

The wildfires of 2006 and 2017 introduced us to “megafires,” the official term for fires that exceed 100,000 acres. This was a new and scary dimension of reality: massive blazes driven by powerful winds that destroy homes, threaten entire towns, kill people and livestock, and continue burning for days.

These landmark fires are now branded onto our collective memory. They made a joke of the old-time methods of fighting fire with shovels and wet gunny sacks. So why were we visited by these two mammoth fires in a span of 11 years, and what had changed? I’ve been giving it some thought and last May released a book about it, Bad Smoke, Good Smoke: A Texas Rancher’s View of Wildfire.

To start with, the population has grown. In 1880, when my great-great- grandparents, Quaker farmers from Ohio, arrived at the village of Estacado near present-day Lubbock, the population of the Panhandle and South Plains was probably less than 1,000. Today, the region has over 1 million people.

The concurrent expansion of electrical service in rural areas brings more fire risks. In both 2006 and 2017, the formula that produced the fires included an accumulation of fuel after a wet summer, a dry winter, extreme winds, low humidity, and a breakdown in the electrical system.

Fire suppression is also a factor. Modern societies extinguish fires to protect lives and property. The proliferation of weeds and brush that would have burned naturally has created a highly flammable environment. As Stephen J. Pyne, an Arizona-based fire scholar, notes, we’ve put ourselves on a collision course with nature. “Texas is big,” Pyne wrote in his 2017 book, The Great Plains: A Fire Survey, “fire is bigger.”

The Case of the Monster Fire

Most authors would prefer to write about subjects they choose themselves. That wasn’t necessarily the case with Bad Smoke, Good Smoke: A Texas Rancher’s View of Wildfire. I published the book in 2021 after having a ringside seat to two of the largest wildfires in Texas history. When you get run over by a truck, you describe the truck and how it felt getting plowed over. I wanted to record my fire experiences on a day-to-day basis before they vanished in a fog of memory.

I wasn’t sure I could incorporate those experiences into a Hank the Cowdog adventure—Hank books are supposed to be funny, after all. But I tried, and the result is The Case of the Monster Fire, the 71st book in the Hank series I launched in 1983. The book tells the tale of Slim Chance and cowdogs Hank and Drover encountering a grassland fire like we’ve been seeing in the Panhandle. If you have kids in school, they might be learning about Texas wildfires from Hank and Drover. hankthecowdog.com

Efforts to preserve the High Plains grasslands could also be contributing to wildfires. The U.S. Department of Agriculture’s Conservation Reserve Program has improved range conditions, but it’s also introduced tall grasses that create more fuel in what was once a shortgrass prairie.

Journalist Christopher Collins, writing in the Texas Observer in August 2017, said links between conservation and fire danger are not well understood. He cited a National Weather Service study that found a correlation between conservation programs and fire danger: While some landscapes have been restored to their historical natural state, the natural occurrence of wildfires has been suppressed.

Climate change also plays a role: The Earth has experienced a pattern of rising temperature for decades. Whatever the cause, it’s bad news.

Large destructive fires have become a fact of life for those of us on the High Plains. Until recently, we’ve assumed we could conquer them with more and better firefighting equipment, but that hasn’t worked out so well. For at least two generations, range-management experts have touted the benefits of prescribed burning, a preemptive strategy that calls for burning at times when you can contain the fire. It not only protects property but improves the prairie environment.

The truth is, fire is a natural part of prairie ecology, and our ranch has benefitted from the 2017 fire. It cleared out juniper trees, which can suck up to 30 gallons of water daily, along with broomweed and cactus. Springs have emerged in new places, while others have increased their flows, providing water for wildlife and fostering the growth of willow, cottonwood, and Western soapberry trees.

Thirty-nine months after the fire, we moved into our new home in the canyon. Kris designed it with big windows to provide inspiring views of this beautiful place. We want to live in harmony with our land and to be good stewards. I’m persuaded that there’s such a thing as “good smoke,” a term used by advocates of prescribed burning, but I’m not quite ready to try it in our rough county. The smell of smoke chills my gizzard, and I worry about getting sued if a burn gets out of hand.

The part of my brain that reads books on fire ecology is trying to whisper soothing words to the part that doesn’t like the smell of smoke. We haven’t worked it out yet, but we’re still talking.