140 Years Ago, Judge Roy Bean Became the “Law West of the Pecos” 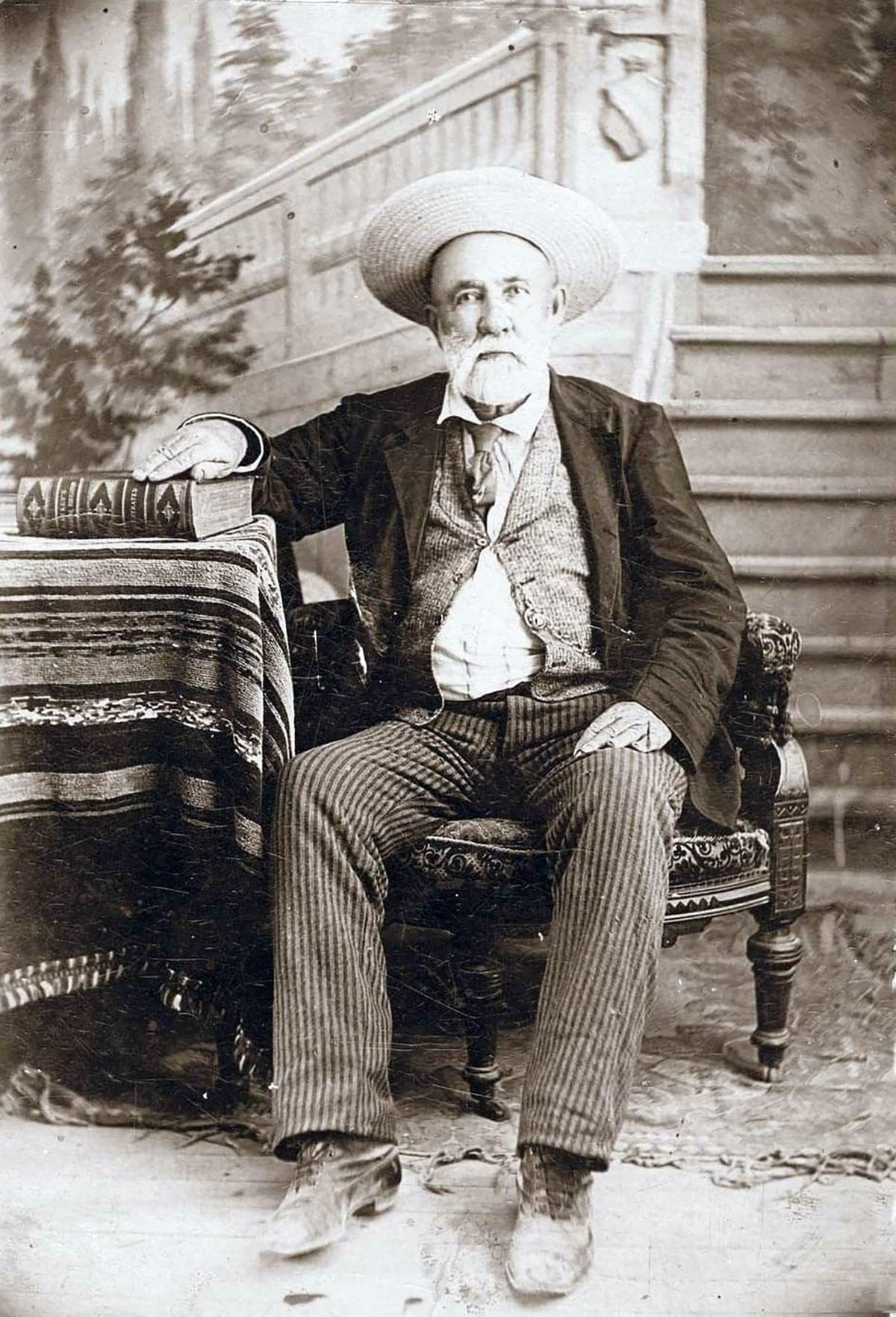 Judge Roy Bean laid down the law in remote part of the Southwest Texas borderlands for several years starting in 1882.

Texas history is full of legendary lawmen, but none were quite like Judge Roy Bean. His version of justice was so wild, Six Flags Over Texas introduced a roller coaster in his honor in 1980. The Judge Roy Scream remains a popular attraction.

On Aug. 2, 1882, the Pecos County Commissioners Court met in Fort Stockton and appointed Roy Bean as justice of the peace for Precinct No. 6. The “Law West of the Pecos,” as Bean became known, presided over “the worst lot of roughs, gamblers, robbers and pickpockets … I ever saw,” as one Texas Ranger captain described the rowdy laborers who were building railroad tracks through the wild Southwest Texas landscape.

Today, travelers from all over the world—some 40,000 of them a year—find their way to the Judge Roy Bean Visitor Center in Langtry (pop. 14), a Val Verde County hamlet perched on a bluff above the Rio Grande. They step into Bean’s Jersey Lilly wooden courtroom/saloon, wonder what kind of performances took place in his one-room adobe Opera House, and marvel at his gavel (which was a .41 Smith & Wesson pistol), his Edison phonograph, his only law book (the Revised Statutes of Texas 1879), and other artifacts in the center’s small museum and travel information station.

One of the biggest fibbers who ever laid eyes on the Alamo, Bean had a natural talent for redecorating the facts. Even his date of birth is questionable, as the late Langtry native Jack Skiles, the first supervisor of the Judge Roy Bean Travel Center, discovered while researching his 1996 book, Judge Roy Bean Country. When I visited Skiles in 1999 for an earlier piece on Bean, he talked about playing cowboys and Indians and pretending to be Tom Mix, the first Western star of the silver screen, in the ruins of the Jersey Lilly as a child. In his research, he unearthed census records that show Bean was actually about 10 years younger than historians thought. While the Handbook of Texas’ entry on Bean and countless other write-ups cite his birth year as 1825, various censuses place his Kentucky birth year as 1834 and 1836.

The “Phantly” part was understandably left behind when a teenage Bean headed out West. After a series of frontier adventures with older brothers Sam and Josh in California and New Mexico, Bean headed for San Antonio at the start of the Civil War. There, he defied the Union blockade by running cattle to Matamoros. In 1866, he wed Maria Anastacia Virginia Chávez, the descendant of Canary Islanders, and fathered two girls and two boys.

Settled in San Antonio, Bean worked as a saloon keeper, freighter, and dairyman. The neighborhood where he lived soon took on the nickname of Beanville.

By 1882, Roy and Maria had split and Bean had rambled down to the railroad-construction camps near the canyons and rock shelters in current Val Verde County. He first ran a crudely constructed rock saloon and gambling emporium in a temporary community called Vinegaroon (likely named after the wild scorpion found in West Texas), but by that summer he was operating a somewhat more substantial watering hole and card parlor in a border outpost called Langtry.

Newly established as the justice of the peace, Bean’s rulings from his barroom bench were amusing if also at times unsettling. He once found $40 and a pistol on a dead man and proceeded to fine the man that amount for carrying a concealed weapon. He dismissed murder charges against another man because the victim was of Chinese ancestry, showing the hard-drinking jurist was criminally misguided in the “all men were created equal” department.

When visitors strolled around the Jersey Lilly during railroad stops in Langtry, Judge Bean charmed them with swooning oratory about the Jersey Lilly’s namesake, his frontier celebrity crush, British actress Lillie Langtry, whose portrait hung in the courtroom/saloon. Passengers often purchased beers to feed to Bean’s pet bear. Defying state authorities who had outlawed boxing, he staged a prize fight on a sandbar in the Rio Grande.

Decades after his death in 1903, his legend inspired a pack of Judge Roy Bean iterations on TV and the silver screen, played by the likes of Walter Brennan, Edgar Buchanan, Paul Newman, and Ned Beatty. In 2011, I met actor, writer, and assistant director Randy Barbee, a native of Bronte (north of San Angelo) who was in his home state researching Bean for a live drama or screenplay.

“My dad used to break up the interminable rides through rural West Texas with tall tales of the ‘Law West of the Pecos,’” Barbee explained in a recent email. “He spun them with such gusto that Mother would look embarrassed.”

Not long after Barbee appeared as the bearded Judge Whitney R. Runions in the HBO hit The Sopranos, he was back in Bronte when his sister saw him in a wide-brimmed straw hat that resembled a sombrero. She blurted out, “You look just like Judge Roy Bean.”

“I thought, hey, actors are always looking for roles,” Barbee recalled. “Here’s a layered and complex role for which I am the stereotype. But I had no idea how complex the role was. The more I learned, the more fascinating his story became.”

Perusing every book on Bean he could find, Barbee learned that “the stories are never the same from book to book because Roy seemed to feel that no story was ever set in stone.” And, after a couple dozen pounds of writing, Barbee found that contemporary theater—both in Texas and New York—could not cotton to such a politically incorrect old buzzard, even one so colorful as Judge Roy Bean.

“It really wants to be a movie,” Barbee said. “His life intersects with history at almost every turn, and the real story is much better than Hollywood’s version.”

Judge Roy Bean Visitor Center
Langtry
On US 90 about 60 miles west of Del Rio, you can find dioramas that portray Judge Roy Bean’s story and exhibits including his ornately carved walking stick and a deck of cards reportedly cut by Lillie Langtry. About 60% of the wood in his courtroom/saloon is believed to be original. 432-291-3340

Bean gravesites at the Whitehead Memorial Museum
Del Rio
Both Roy and son Sam are interred on the museum grounds. Artifacts in a recreation of the Jersey Lilly include the classic Pearl Beer poster of the courtroom/saloon. 1308 S. Main, 830-774-7568; whiteheadmuseum.org

US 90 bridge over the Pecos River
Comstock
As you zoom down 90 over the Pecos, recall the railroad’s famous 1892 Pecos River High Bridge, which was 321 feet high. Judge Bean reportedly declared workers who fell from the bridge dead, even though a few still clung to life, so he could get his hands on the $5 per body coroner’s fee.

Hot Wells of Bexar County
San Antonio
In 1894, Hot Sulphur Wells resort proprietor McClellan Shacklett spied a railway delivery wagon headed for his hotel-bathhouse with a live bear in a cage. Shacklett knew immediately who had shipped him the beast. Today, the atmospheric ruins of Hot Wells are a county park. 5503 S. Presa St.

Roy and Maria’s home
San Antonio
According to the San Antonio Business Journal, it is the oldest (built 1810) house standing in San Antonio. “The home, made of limestone to resemble the stone of the missions, sits within the former lands of Mission Concepcion and historic research states the home was the center for ranching operations for the entire land when it was first constructed,” reports the Journal. “Roy Bean purchased the house in 1873 for $120, or the value of ‘six good cows with sucking calves.’” 407 E. Glenn St.

One of Barbee’s favorite tales concerns the placement of the Jersey Lilly in the developing town of Langtry. “He found that he had miscalculated where the depot would be sited; he’d planned to have his saloon right where the train doors opened. But his old adversary, the Torres family, owned all the land where the new town would be established. So, when Roy couldn’t buy a plot—Torres hated him—Roy just plopped his saloon down in the middle of the railroad right-of-way and ran his saloon from there. Who does that?”