4,900 Miles Later, This Cyclist Has Biked Every Single Street in Austin

On his quest to pedal across the 11th biggest city in the country, Aaron Chamberlain saw an armadillo do the most amazing thing 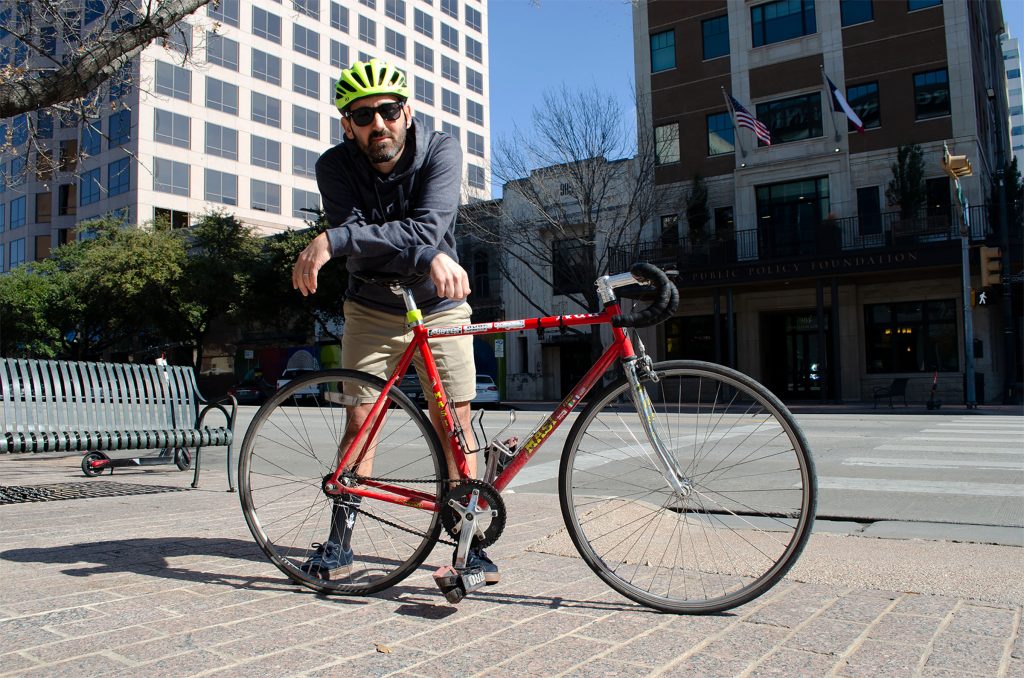 Aaron Chamberlain with his bike in downtown Austin. The cyclist rode roughly 4,900 miles of Austin roadways over 385 days.

The final map of Aaron Chamberlain’s project looks like the work of a distracted Etch A Sketch artist: red lines tangle densely and frenetically at the center in grids and dwindle to sparser, asymmetrical doodles at the edges. This is a portrait of Austin, Texas, every single street of the city—and every mile of which Chamberlain has methodically traveled by bike.

Chamberlain, a 40-year-old father of two, set out in late November 2018 to ride all the boulevards, lanes, avenues, and coves of the city he’s called home since 2008. He wrapped up the project just before Christmas 2019, having ridden and recorded roughly 4,900 miles of Austin roadways over 385 days. An additional final tally—61 Volkswagen vans spotted—may best capture the relaxed spirit of the endeavor, however.

“Austin overall is a really good city for cycling,” Chamberlain says. “There are plenty of ways to get around and even avoid hills if you’re not into them. There’s good infrastructure and the drivers here seem to be more aware.”

Developed land in Austin—lung-busting hills included—encompasses more than 300 square miles. Across the years, Texas’ sprawling capital has often been included among rankings of the most bike-friendly cities in the U.S. Austin was ranked 13th in Bicycle Magazine’s 2018 “Best Bike Cities in America” list. Austin is also the only city in Texas that the League of American Bicyclists recognized as a gold-level bicycle-friendly community. By linear mile, the number of bike lanes in the city roughly tripled from 2008 to 2017, and in 2017, Austin was the recipient of a Big Jump Project grant from the organization People for Bikes, with the goal of doubling the number of people riding bikes in Austin’s core by 2020. Although it’s no Copenhagen or Vancouver, Austin is certainly the cycling mecca of the Lone Star State.

As a dedicated cyclist and former bike racer, I’ll admit I approached Chamberlain with a certain expectation. Cyclists—or runners, triathletes, and others of the endurance-sport persuasion—on a mission such as this often take themselves very seriously. Their journeys are “spiritual” and “transformative.” Some can pedal themselves all the way to a state of “transcendence.” They ride for good causes ranging from medical research to saving wild rhinoceroses. They relentlessly track power numbers, mileage, and nutrition.

I admire this organized sense of determination and larger, mightier sense of purpose, but I have to say it’s also refreshing to find someone who admits they’re doing it primarily for kicks. I shouldn’t have expected anything less from a co-founder of the Austin Beer Guide.

I meet Chamberlain downtown one sunny January day for his usual lunch ride from his day job on Congress Avenue out to Exposition Boulevard. Without a shred of Lycra in his ensemble, he’s wearing a hooded sweatshirt, chino shorts, and skateboarder-style shoes that he pulls Velcro pedal straps over. He shows me the Garmin watch, its broken band glued together, that he uses to record all his rides and then upload them to his Strava account. His bike is a well-loved, 8-year-old Masi fixed gear covered in stickers. (A fixed gear is a single-speed bicycle that’s about as simple as it gets: no gears, no freewheel mechanism—it’s basically just cranks, pedals, and a chain.)

I figure I’m probably annoying him, but I cover all the bases just to be sure. No races? No Gran Fondos? Not even any regular weekday group rides? (And does he never use real bike shorts? The answer is that on his longest rides sometimes he wears mountain-bike “baggies” with a padded chamois in the liner.) As I try to place him in one of cycling’s cultural categories and neatly describe his motivations, I find that Chamberlain is just as laid-back and idiosyncratic as he first seems.

“I consider myself more of an adventure cyclist,” he says. “When people ask me why I did this project, I mostly don’t have an answer for them, or at least not one they think would make any sense.” He wasn’t training to race or even for the fitness, per se. He wasn’t doing the ride to fundraise for a charity or to promote a cause. “Riding bikes is fun,” he says. “This gave me an excuse to have more of that fun in my life.”

Chamberlain’s inspiration came from professional runner Rickey Gates’ month-long quest to run every street in San Francisco. Chamberlain liked the idea that it was something that hadn’t been done before. “When I saw this, it was kind of like a bike tour that was broken up into many rides over the year,” he says. He squeezed his rides in between work and family life, an escape from the daily grind that became its own routine.

Every Single Austin street is done kids! 11/27/18–12/17/19 Final map. Wish it were neater, but Austin's city limits are a mess (https://austintexas.gov/gis/JurisdictionsWebMap/). Miles ridden on my fixed gear bike during project: 4,907 (Granted a good amount of these are streets that I could not avoid riding twice or multiple times. Also things like one mile long dead end streets.) Shortest ride: 0.14 miles Longest ride: 52.62 miles VW Vans spotted: 61 #everysinglestreet #everysingleaustinstreet

By virtue of his #everysingleaustinstreet project, Chamberlain has perhaps earned a unique viewpoint on Austin. Even people who’ve lived all their lives in a city haven’t seen all the streets. And traveling by bike slows the pace. You look at the landscape in a different way and are more willing to make stops. “When you’re riding in a car and you see something cool, you’re usually going to keep driving,” Chamberlain says. “If you’re on your bike, it’s easy to turn around.”

Chamberlain used his Twitter account to open up dialogue about his effort. Some people chimed in to tell him he’d missed a spot here or there, and Chamberlain would explain that he was completing the “Austin Full Purpose” jurisdiction map, which excluded some areas, and he was also skipping highways and private roads. Mayor of Austin Steve Adler retweeted Chamberlain’s final map of the project, commenting “Just, wow.”

Chamberlain started his experiment by expanding his usual workday commute from his home in the Mueller development to downtown by biking new streets. By the time he was waking up at 4 a.m. to hit neighborhoods farther out, he’d gone too far (and too many people had heard about his project) to quit. Austin is growing so fast that he had to backtrack to fill in his map with streets that were newly built. His very last ride was a 0.38-mile dead-end cul-de-sac in the East MLK area on December 17.

When I ask him what he’s learned from the project, the closest I get to an epiphany from Chamberlain is when he talks about the armadillo he saw one day crossing the street. “I didn’t know armadillos could hop,” he says, his voice still expressing the sense of amazement he’d felt in the moment. “It hopped with all four feet from the street up to the curb in one leap.”

So, what’s next? With a wry, almost self-deprecating laugh, he describes an ambitious statewide project that he’s not quite “putting out there” yet and says he’s building up to it now by getting as many miles in as he can. He rides in the morning, at his lunch break, and on the weekends, starting early so he can get back home around the time his 7-year-old and 10-year-old are done with their allotted screen time for the day. His goal for many of his bike rides is simple enough: “Build in more time for a beer on the way home.”