50 Years Later, We Need Rothko Chapel More Than Ever

Written by:
Dina Gachman
Photos by: 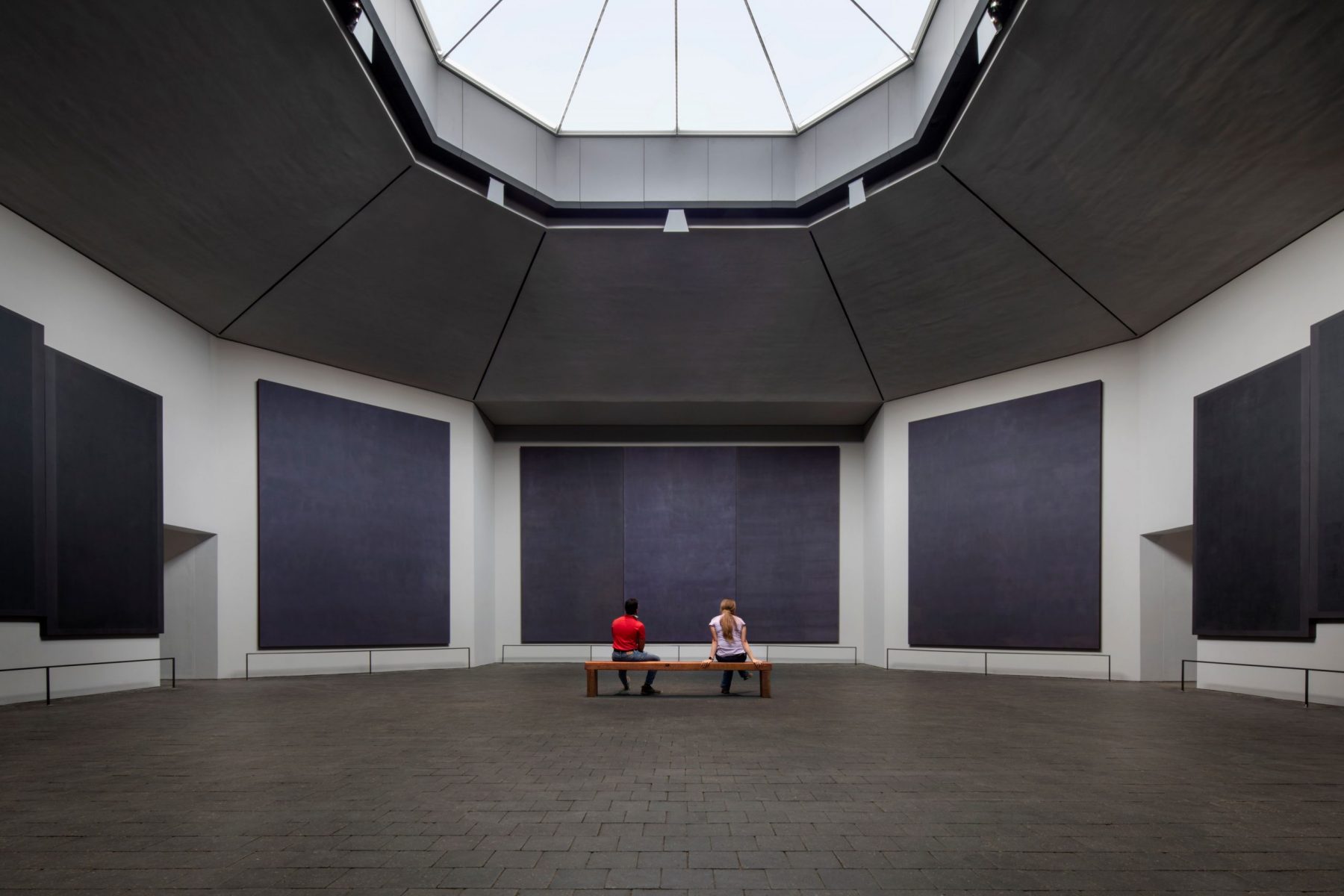 Back in the 1990s, when I was a high schooler, Houston wasn’t known as the multicultural mecca it is today. The late, great Anthony Bourdain hadn’t showcased the city’s culinary diversity on Parts Unknown, and celebrated novelists like Bryan Washington weren’t immortalizing the Third Ward neighborhood or the nightclub staple Numbers in books like Memorial. Once upon a time, seeking out art and creativity in the city felt like a lonely task.

The first time I stepped into Rothko Chapel on Yupon Street, I was 15 years old and in search of inspiration. Entering the space was like discovering a secret oasis in the middle of all the city’s concrete and noise. I’d seen Mark Rothko’s abstract canvases before in magazines and books, but stepping up to his paintings, standing inches away, was humbling. From far away, they might look like someone simply covered a giant canvas in black or dark purple paint, but up close you see so much more. The pieces come alive with texture and light, and each one tells a story. Places like Rothko Chapel, and neighborhoods like Montrose, where it’s located, became the city’s saving grace for suburban teenagers longing for creativity, culture, and a break from the fast-food chains and gas stations crowding Memorial and Westheimer.

Rothko Chapel is hosting a 50th anniversary celebration during the weekend of February 26-28. A series of virtual events will celebrate the history of the space, emphasizing the civil engagement and outreach the Rothko has fostered over the years. The grounds and the building have undergone an extensive restoration, led by Adam Yarinsky and Stephen Cassell of ARO (Architecture Research Office). The program will include discussions about ARO’s processes, an “interfaith service” including Sufi whirling, a musical performance in conjunction with Houston’s renowned DACAMERA, and a concert with Latvian jazz ensemble Maris Briezkalns Quintet in honor of Rothko’s Latvian roots.

Since 1971, Rothko Chapel has been a hidden gem in Houston—if a place that attracts well over 100,000 visitors a year (pre-pandemic) from over 100 countries can be considered a hidden gem. Executive Director David Leslie has been with the chapel since 2015, and he says reactions to the space have ranged from people breaking down in tears because they’re so overcome with emotion, to people walking inside, seeing Rothko’s dark, seemingly monochromatic canvases for the first time and asking, “Where are the paintings?” Before the new restoration reconfigured the space to let more light in so people could see the nuances in the paintings, Leslie says, “That was a classic comment.”

Rothko Chapel’s founders, Houston arts patrons and philanthropists Dominique and John de Menil, imagined the place as a space for art, spirituality, and social justice to intersect. They felt revered abstract expressionist painter Mark Rothko’s work had that resonance, and commissioned him to create the 14 original pieces for the chapel. Rothko wanted to evoke an emotional experience with the paintings he created for the chapel, and worked with the original architects to design the space. He finished the paintings, but he committed suicide in 1970, a year before the chapel was dedicated. Rothko never had the chance to step inside. 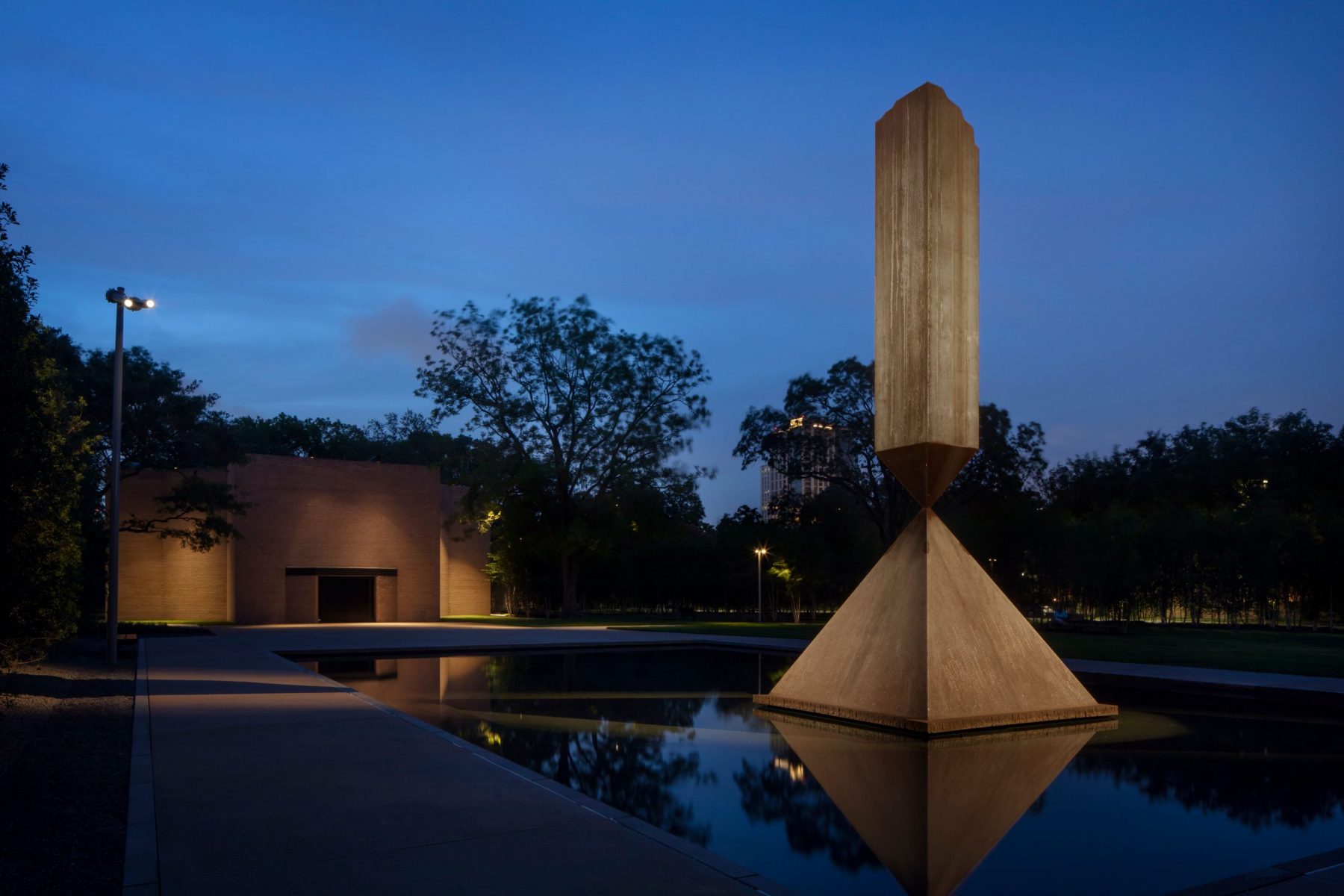 Artist Barnett Newman’s “Broken Obelisk” sculpture, dedicated to Dr. Martin Luther King Jr., has also been a part of the Rothko since the beginning. The de Menils intended to dedicate the sculpture to the City of Houston as a memorial to King, but the City rejected their proposal. The sculpture eventually found a home on the grounds of the chapel, as a testament to the life and words of King. Over the years, the Rothko has hosted programming and events featuring speakers ranging from the Dalai Lama and Nelson Mandela to Brené Brown and Susan Sontag, keeping alive the original intention of the de Menils.

Now, the restored interior looks like Rothko originally intended, with a new skylight that allows the sun and clouds to work their magic on the canvases—without harming the paintings. This creates an ever-evolving experience that changes depending on the weather, a visitor’s mood, or the energy in the room.

“When you step inside on a clear day,” Yarinsky says, “it can take 10 or 15 minutes for your eyes to adjust from the Texas sun, and to see the subtlety in the paintings.”

Yarinsky had been to the chapel years before, on a quick visit to Texas with his young kids. The rushed nature of the trip didn’t allow him to fully appreciate the artwork or the space, but coming back to work on the project helped him see what a “mysterious and exceptional” place it is. “You can have this extraordinary experience in an ordinary neighborhood,” he says.

When Yarinsky and Cassell were traveling to Houston from New York to work on the project, they would sit on park benches on the chapel grounds eating barbecue from The Pit Room on Richmond, or they’d pick up Torchy’s Tacos for breakfast. That contrast makes Rothko Chapel so unique; it’s a place for contemplation, but that doesn’t mean you can’t relax on the lawn and share some ribs. It’s also not so grand that it’s unattainable or alienating.

“We live in a time when opening one’s eyes and hearts—and opening up to new ways to see one’s self and history—is critical,” Leslie says. “Rothko Chapel is part of Texas history.”

Yarinsky and Cassell have gotten to know that history intimately, and the experience of working on the Rothko, especially during the chaos and stress of the last year, has been profound.