While on the road, Tony Delane paints the heart of small towns with bold strokes and vibrant colors 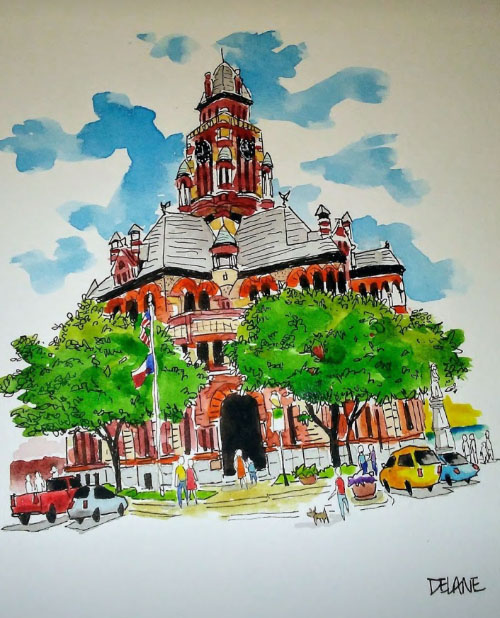 The artist’s rendering of the Ellis County Courthouse in Waxahachie. Photo courtesy of Tony Delane Artwork.

When Mesquite artist Tony Delane is not behind the wheel of a truck hauling glass for Trulite Glass and Aluminum Solutions, driving from DFW to deep East Texas to the Cross Timbers and the northern edge of the Hill Country, he most likely can be found with a paintbrush or a pen in the hand.

The 55-year-old Dallas native draws and paints everything—caricatures, still-life paintings, renderings of comic book characters, you name it—but since December he has been on a Texas courthouse square kick.

Delane’s courthouses are invariably in watercolors, the bold strokes suggestive of Leroy Neiman and other popular illustrators of the mid-20th century. (In Texas, E.M. “Buck” Schiwetz comes to mind.) Delane has visited a few dozen of Texas’ 254 such secular cathedrals, and he hopes one day to put together a book featuring his illustrations of each. (In the meantime, he’s content selling his eclectic collection through his Etsy shop.)

Texas Highways talked to Delane about this project, the joys of the open road, and his favorite Texas county courthouse.

Q: So I understand traveling is your job. What do you enjoy about it?

A: I get to come home every day, and I love the peace and quiet of it, the serenity, just being alone and in my thoughts. It’s better than just sitting there at the job. I used to be a backup dispatcher and I didn’t like that very much. But I’ve been doing this now for 17 years. You are out there in the elements and I enjoy that.

A: I have the same rotation every week. Tuesdays and Fridays, I go to East Texas—I go as far as Nacogdoches, Center, and sometimes into Tyler. Mondays and Wednesdays, it’s Waco, Killeen, Lampasas, places like that. And on Thursdays, I head out to Graham and Nocona, in that direction.

Q: Wow, that’s a good chunk of Texas. Towns like Graham and Nacogdoches are very different.

A: Absolutely! Out of all the routes that I do, I love East Texas the most. You’ve got those pine trees and there is so much to see. I really love it there. I would move there in a heartbeat. 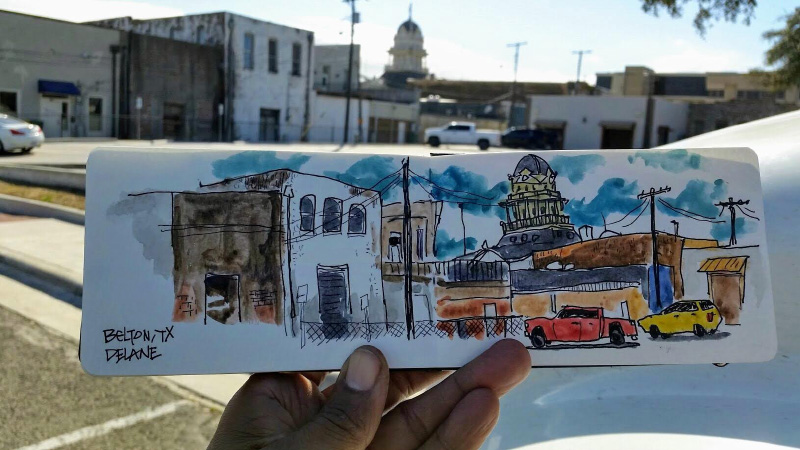 Q: So how did the courthouse project come about? Is it just that they are the most prominent buildings in some of these towns?

A: True, but it was really more my wife’s idea. I’d always been intimidated by drawing on location, but maybe three years ago I decided I wanted to try to start doing it, so I joined a group called Urban Sketchers of DFW. A large group of us would go out once a month and draw the same place from our own perspectives. But where I really got started was at the rest stop on I-35 near Abbott, Texas. It’s a really nice rest stop, and I just got my watercolors out and decided to see what I could throw together in 30 minutes on my lunch break. And I showed it to my wife, and she posted it on the Backroads of Texas Facebook group, and it took off from there. I did not expect that type of response.

Q: I understand that led you to a more impressionistic style.

A: A lot of the stuff I do I’m not ever really intending on showing anybody. I do it just for me. I like to draw things where I get every detail right; take my time. But my wife said I should see what people thought of the things I did fast, like this one in Abbott, and I was surprised at how it took off. It amazed me, really!

Q: How many counties are you into the courthouse project?

Q: It seems like most of the courthouses you’ve drawn are in the more traditional, Victorian style. Have you drawn any of the more modern ones?

A: I’ve run across a couple but it’s funny because a lot of people will ask my wife, has he been to such-and-such county? And she will say no, not yet, and they will tell her that they would rather see me draw the old courthouse that’s no longer there than the one they have now, because it was more historical or whatever. My wife says that if I am going to do a book, I probably should do the current one, but most of these people, they want to see the old one. The new ones don’t really speak to me. I am not that excited about doing them. Those can be like a chore.

Q: Are you on a timetable?

A: It’s gonna take a long time to do all of them, especially with my work schedule, but my wife just tells me when I get all stressed, just do one when you can.

Q: So do you have a favorite?

A: Awww that’s easy! Waxahachie, Ellis County. It reminds me of a cuckoo clock. When I was a kid I was fascinated by cuckoo clocks. It’s so amazing. I love it.