Alamo Redevelopment Plan Moves On After Burials Discovered by Archeologists

Excavations have been halted where the old burials were found, but the redevelopment plan is moving forward. 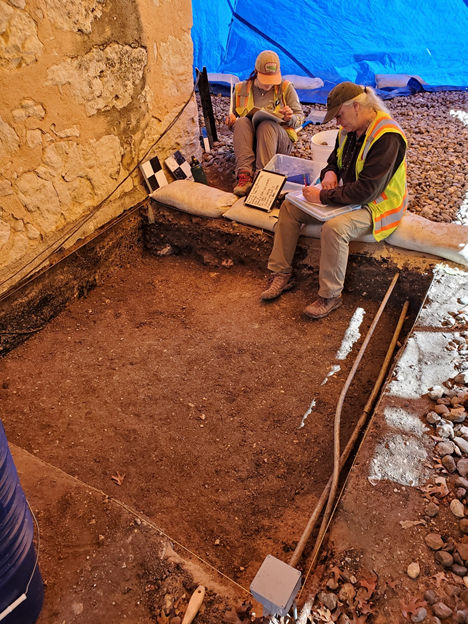 Courtesy of The Alamo

The initial phase of the Alamo’s comprehensive redevelopment is scheduled for completion this year, despite the recent discovery of long-ago burials in the hallowed landmark and ongoing disputes over the plan.

The Texas General Land Office disclosed in December that archeologists had discovered the skeletal remains of three humans during excavations of the Monks Burial Room and Nave of the Alamo Church. The excavators were working to locate the foundations of the 300-year-old structures and prepare for the installation of moisture monitoring equipment.

The work is an early part of the redevelopment master plan. The plan’s goals are to restore the Alamo Church and Long Barrack, “recapture the Historic Mission Plaza and create a sense of reverence and respect for the historic battlefield,” and repurpose a retail area across the street from the mission grounds “into a world-class visitor center and museum.”

The discovery of the bodies stirred national headlines and passions, though it was just the latest among many unearthings of remains at the Alamo. Since the Battle of the Alamo in 1836, at least 16 bodies have been unearthed, according to the Alamo website.

The latest discoveries include an adult and child in the church’s nave and a teenager or young adult in the Monks Burial Room. Karina Erickson, press secretary for the Texas Land Office, says archeologists don’t yet know whether the two sets of remains are connected. Others have suggested they could be Alamo defenders, Spanish colonial-era residents, or Native Americans.

If archaeologists determine the latest discoveries are “intentional burials” it could delay the redevelopment work. Erickson says the Land Office has filed “necessary paperwork to move forward with verifying the locations of the interior of the church as a cemetery.” Such a designation would prompt regulations regarding burial grounds.

For now, “the remains are ‘in situ,’ or in place,” Erickson notes. “All excavation in the digs where the remains were found is still halted.”

Also last month, the San Antonio Design and Review Commission approved by a 7-4 vote the relocation of the Alamo Cenotaph as a key part of the first phase of the Alamo’s $450 million redevelopment. Opponents of the relocation, including a Native American group that has filed a federal suit, used the discovery of the remains to argue that the commission should stall Phase One, though the Texas Land Office said afterward it is still on track.

The massive cenotaph, dedicated to Alamo defenders as part of the 1936 centennial of the battle, carries the names of the Alamo fallen, leading to claims by detractors of its relocation that it is a “war memorial.” The redevelopment plan calls for moving it 500 feet to near the front of the Menger Hotel to remove an obstruction of the view of the front of the Alamo and attempt to preserve the wider historical perimeter of the site.

What does all this mean for the estimated 2 million annual visitors to the Alamo in 2020? For now, the Long Barrack is closed until its preservation is complete, but its exhibits have been temporarily moved to the current Alamo Exhibit Hall. “The Alamo church is open to the public (and) the public can view excavation work in some of the areas inside the Alamo Church and surrounding the Long Barrack,” Erickson says. Another unique visitor opportunity: The intricate restoration work on the cenotaph “will occur in the Plaza in a protected but visible environment,” according to the Land Office.