Eva Ybarra, the Accordion Queen, Was Born to Play 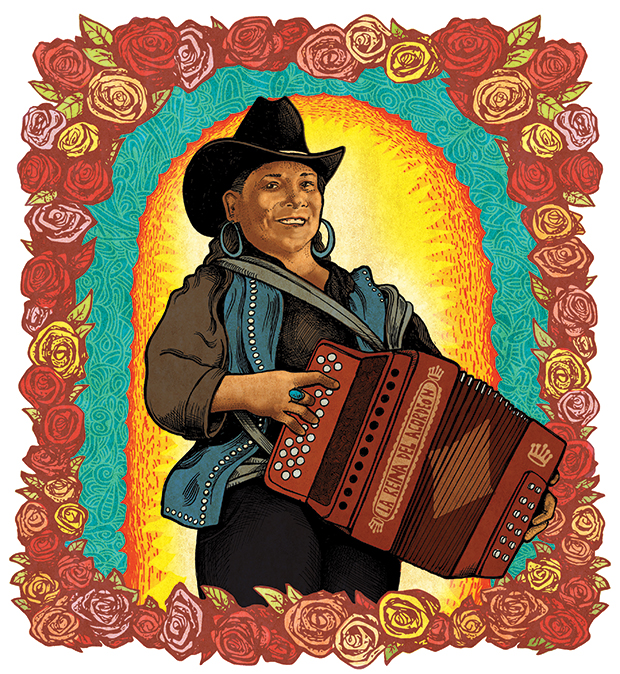 Not much has come easily for Eva Ybarra, except playing music. Since getting her start as a young girl in San Antonio icehouses in the 1950s, the accordionist has carved out a lasting career with her progressive style and forceful singing. Today, Ybarra is recognized as one of conjunto’s most accomplished players—despite the vagaries of the music business and the headwinds of macho chauvinism—and is known by the esteemed nickname, La Reina del Acordeón (the queen of the accordion).

Keep up with Eva Ybarra’s upcoming performances at facebook.com/thequeenoftheaccordion. Ybarra sells CDs at her shows, and some are available online.

Ybarra made her first recordings as a teenager and worked the San Antonio conjunto circuit for years—often wearing a cowboy hat and holster on stage—winning over fans and escaping from more than a few tight spots, such as the bar brawls, spiked drinks, and attempted assaults that she recounts in her song “La Historia de mi Vida.” The fifth of nine children, Ybarra lives in an apartment not far from the southwestern San Antonio house where her mother and father, a truck driver, raised their kids and played music on nights and weekends.

“Ybarra went where few women dared, she ventured into the male-dominated ranks of conjunto,” says Ramón Hernández, a musicologist who included Ybarra in his Legends of Tejano exhibit, which is on display through Dec. 20 at the Wittliff Collections at Texas State University in San Marcos. “She is famous for being a pioneer, helping set the mold as an example and opening the doors for other female accordionists.”

Ybarra has won numerous honors over the years, including induction into the Texas Conjunto Music Hall of Fame, and this summer, she was recognized with one of the nation’s top awards for a folk artist, a National Heritage Fellowship from the National Endowment of the Arts. Still, Ybarra performs only periodically with her group, Eva Ybarra y Su Conjunto, mostly at festivals, and she sometimes plays with mariachis at local restaurants to make ends meet. She also teaches weekly accordion classes at the Guadalupe Cultural Arts Center in San Antonio.

Q:You grew up in a musical household?

A: I remember sleeping in the crib, and my dad was playing the guitar with my brother and some other guys in the living room. I woke up hearing the music, and I went to the living room. They told me to go back to sleep, but I didn’t sleep. I was looking through the keyhole because I wanted to watch them.

Q: How did you get started on accordion?

A: I started with a two-row accordion at 4 years old. At 6 I was playing here and there, at icehouses, supporting my parents. They sat me on plastic crates because I was too small and couldn’t reach the floor. I was very little.

Q: How did you develop your personal style of accordion playing?

A: This is the thing: I didn’t want to copy anybody. I wanted to have my own style. I can copy if I want to, but I want-ed to cross over. And I did, because my songs are played in Germany, Australia, Canada. I learned a little bit of music theory—inverted chords, pentatonics, and chromatic scale—that makes me a little bit different. I like to play a little blues. I wrote a huapango called “Huapan-blues,” and I have one called “Huapan-jazz.” Sometimes people don’t like it. They like more traditional. But I’m not that. You don’t have to like it. If there are 10 people that like it, and one that doesn’t like it, I’m winning.

Q: How did you get the nickname La Reina del Acordeón?

A: It wasn’t me. They could call me Eva Ybarra the humble, the criminal, the killer, the monster. But La Reina del Acordeón, the people give me that name. And I appreciate it.

Q: What’s it like being a woman in conjunto music?

A: It’s not too easy for me. I struggle a lot because there’s a lot of envy. They don’t want to see a lady being the leader of the band or making arrangements or making songs. They don’t like it. There are a lot of guys that say, “I’m afraid to play in front of you.” They get intimidated, and they say, “Eva Ybarra is coming? I don’t want to play after her.”

Q: Where do you like to perform in Texas?

A: I’ve been in Corpus Christi, Austin, the Valley. They appreciate the music. San Antonio does too. I love San Benito. I wrote a song called “Mi Querido San Benito.” They enjoy and appreciate our music, and I wrote it for them. I like every town, and every town I go I want to stay. But no, San Antonio is my hometown, and I wouldn’t change it.

Q: What places do you like to take visitors in San Antonio?

A: I like las misiónes, the missions, the Alamo. I love that everything there is historical.

Q: What are your favorite San Antonio restaurants?

A: Mi Tierra, La Fogata, Jacale, Los Barrios; and El Golfo is a good one too. What I like is the campechana [a seafood cocktail] with shrimp, fish, avocado, lobster, and lemon. I like Chinese food and the Golden Star on Commerce. After playing with the mariachis, we go and eat over there, and sometimes I order the fish and gravy.

Q: Eva Ybarra y Su Conjunto has been your band ever since you were a teen?

A: Yes, but now we call it Eva Ybarra y su Conjunto Siempre para Ustedes. That’s the way it’s going to be: forever for the people. Without the people, we’re nothing. I love music; it’s in my body. Like I always say, if I stop playing, I think I will die. And I’m still going to play with God.