All That and a Bag of Chips: The History of Frito Pie

How Fritos corn chips, chili, and cheese went from a ladies luncheon to a Friday night lights staple 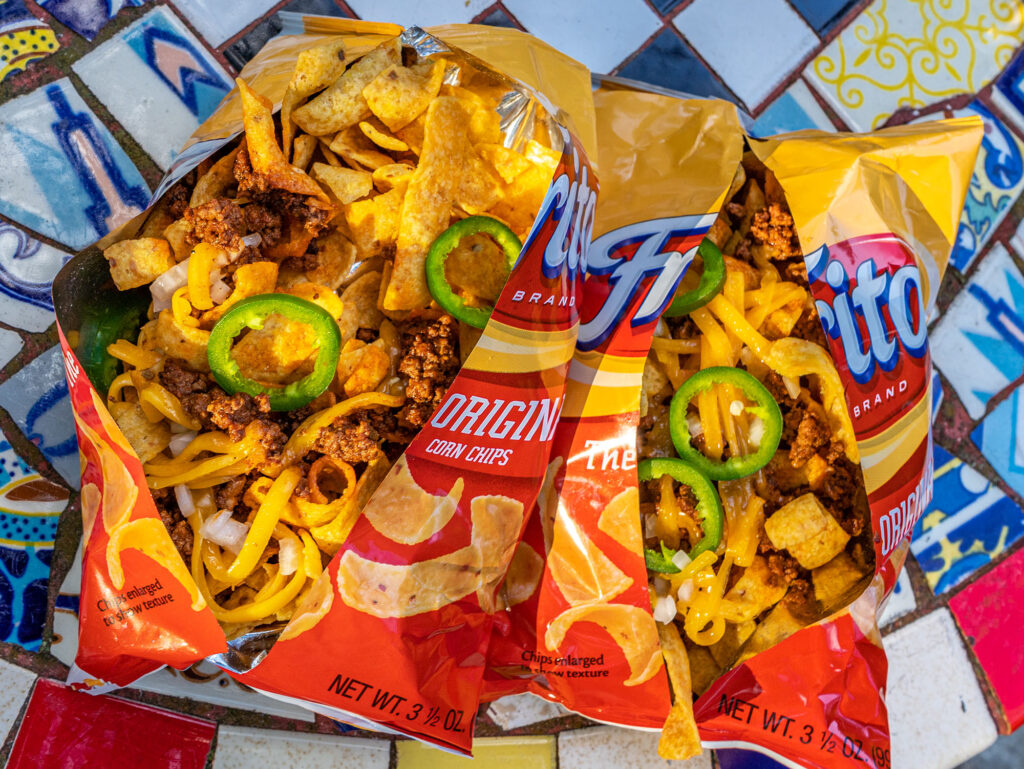 What is there not to love about Frito pie? To Texans, it’s something akin to instant cheese enchiladas. You have all the same fundamental ingredients—a corn base topped with chili gravy, cheese, and crisp white onions. What it lacks in the pillowy texture of enchiladas it makes up for with the crunch of the Fritos. Now, with football season in full swing, there’s no better time to take a deep dive into this concession-stand staple.

Unlike, say, chili con carne, tracing the history of Frito pie is relatively easy. Its origins are not shrouded in the mists of time—obviously, Frito pie could not exist before the invention of the Fritos corn chip circa 1932. This is when Charles Elmer Doolin, a San Antonio transplant from Kansas City, Kansas, bought a bag of corn chips at a café, then decided to go all in and buy the recipe. With $100 borrowed from his mom, Doolin bought the recipe—along with a manual potato ricer and 19 retail locations selling the chips—from a Mexican national named Gustavo Olguin. (A soccer coach when not peddling Fritos, Olguin used the money to buy a ticket home.)

According to old articles and clippings found on Newspapers.com and the Portal to Texas History, chili and Fritos were served separately at ladies luncheons and society dinners throughout the 1930s. Early in the decade, Fritos were offered at spreads alongside olives, frijoles, tortillas, tamales, enchiladas, and so on. As the decade progressed, the two moved ever closer toward one another so that by about 1936, you started to see simplified menus offering only tamales and/or enchiladas, chili, and Fritos.

At a 1937 LaGrange Oddfellows Lodge repast, the supper menu lists “Fritos, chili con carne, hot tamales and beans, with good coffee, apple pie, cheese and crackers added.” Note the prominence of the Fritos and chili—it seems as if tamales and beans had been relegated to side-dish roles. Also note: cheese seemed to top only crackers.

The combination of cheese and Fritos and chili came together a decade later, when the name “Frito pie” made its national debut in May 1946. According to The Electra News of Wichita County, at a meeting of the Electra Home Demonstration Committee, Mrs. E.R. Graham showed off a Frito pie to a group of housewives. After that, similar mentions of the dish appeared in Abilene and Waco papers.

Alas, no recipes are mentioned in any of these notices, leaving an opening for Lillian Townsend of Durant, Oklahoma, to sneak in from north of the Red River in February 1948 and become the author of what is now the earliest known Frito pie recipe: her casserole-style version is basically a quick-and-dirty scratch chili con carne layered atop Fritos, which in turn are beneath a layer of cheese. Repeat stacking once, and bake until cheese is bubbling and starting to brown.

Around this same time, the recipe found its way to the Dallas headquarters of the Frito Company. According to research by Kaleta Doolin, daughter of Fritos popularizer Charles Doolin, the company’s PR wing served “Fritos chili pie” to the Dallas Dietetic Association in 1949, and it was Katy-bar-the-door after that: In paper after paper all over Texas, you see Frito pie listed as a staple of school lunches through the 1950s—a mildly spicy treat for the young folks of the Eisenhower era and beyond.

All that remained was for the dish to assume its current delivery system—served in a sliced-open Fritos chips bag. According to Texas food historian Robb Walsh, that breakthrough came in 1962, after the company merged into Frito-Lay and phased out paper bags and replaced them with grease-proof, insoluble cellophane. Someone had the brilliant idea to print the Frito pie recipe right there on millions of bags.

And, so, a Friday night lights concession stand classic was born—and has spawned many variations since. Starting with the FP Trinity (Fritos, chili, and cheese), you can mix your ingredients from there: plain Fritos or their chili-cheese variation; chili with beans or without; canned or blue-ribbon, homemade beef or venison; green chili or red; white Mexican queso, nacho cheese, or yellow American cheese, or fancy it up with Brie. Finely diced white onions, a relative latecomer to the party, are most welcome, but some insist on spring onions. Jalapeños have become almost as common as onions—I prefer freshly diced, but pickled and sliced will do. Top it off, as some people will, with a dollop of sour cream.

You can find further evolutions at the “I Can Cook Mexican” Facebook page. Some swear by a few squirts of yellow mustard. It’s surprisingly good on a chili dog, so why not?

Making the case for it being more than a quick dinner for home cooks or a bleachers snack, some restaurants make it a featured dish. As you might expect, Austin’s Texas Chili Parlor serves up a famous rendition, as do too many barbecue joints to mention. In Houston, ’cue-heads rave about the loaded (topped with brisket or pulled pork) version at the Pit Room, and B.B. Lemon’s has a fix-your-own Frito pie bar. Big D’s Allgood Cafe and Fort Worth’s Dutch’s Hamburgers offer pico de gallo-topped versions—yum!

To come full circle, Brenda’s Burgers and R D’s Burgers (of Cibolo) both serve renowned versions of the dish in and around San Antonio, the birthplace of the Frito. Talk about $100 well spent.

An earlier version of this article said that the Frito company and H.W. Lay and Company merged in the late ’40s. This merger did not occur until 1961. Texas Highways regrets the error.