Traveling by Train from Orange to El Paso 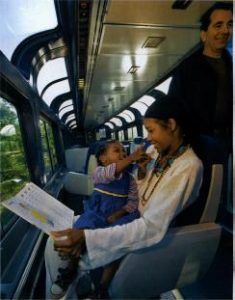 Estrella Oji entertains her daughter Maat on the ride from New Orleans, Louisiana, to their home in Berkeley, California. RIGHT: Within walking distance of the Bayou City’s Amtrak depot, the Houston Theater District includes the Wortham Theater Center (left) and the Seven Wonders public art project. Photo by Virgil Fox

The long, low whistle of a train strikes a chord deep within the American psyche. As that mournful sound swells and recedes with the passing rail cars, something inside us whispers, “Go.”

The call was especially strong during the late 1800s when settlers and fortune-seekers poured into Texas via rail. My own great-­uncle hopped a train west from Kentucky back then, a brash young kid looking for adventure. He returned for a visit some years later from his home in Texas, having made a career as a conductor for the Santa Fe Railway.

We weren’t looking for long-lost relatives when my husband and I boarded Amtrak’s Sunset Limited for a trip across Texas. We just wanted to answer that voice within and see what it’s like to take the train all the way across Texas. What we found was a comfortable and relaxing mode of travel with spacious seating-even in coach class-friendly service, congenial fellow travelers, ever-changing views of great cities and quaint towns, and spectacular scenery.

The Sunset Limited, which dates to 1894, is America’s oldest passenger rail line with the same name. Three times a week, it rolls west out of New Orleans, for a 1,995-mile, 48-hour journey that ends in Los Angeles. Nearly 900 miles of the trip is pure Texas.

To see it all, we began our journey at noon one Monday in New Orleans, the eastern terminus of the Sunset Limited route. We met several people who were headed for Texas destinations that afternoon. A card-playing foursome from Atlanta in the Sightseer Lounge told us they planned to get off the train in Houston and then rent a car. ”We’re going to Port Aransas, San Antonio, and Austin,” said Roger Koenigshof, introducing us to his wife, Phyllis, andfriends Jim and Jan Deach.

As we talked, the train moved through south­western Louisiana and over the Sabine River into Texas, and night fell. The twinkling lights of Orange and Beaumont soon gave way to the glittering Houston skyline. The train slowed, and we pulled up to the simple, one-room depot there at 9 p.m. The 1911 Union Station, once the largest railroad passenger terminal in the South­west, lies 15 blocks away and now serves as the gateway to Houston’s Minute Maid Park.

Before our new friends departed, we offered them a few tips on things to see and do. After all, the Houston depot is just a few blocks from the Downtown Aquarium and the Alley The­atre. It’s also within a few blocks of the Hotel Icon, housed in a 1911 building that was once a bank; it’s one of the few downtown hotels right on the METRO Rail, Houston’s light-rail system. And depending on your stamina, the restored Union Station, which recalls the early
days of train travel, is within walking distance.

After a brief stop, we left Houston, heading west. Our attendant converted the seats in our compartment to comfortable beds, and the rocking motion of the train soon lulled us to sleep. We awoke in San Antonio. The Amtrak depot here is a small building adjacent to Sunset Station, the 1902 train depot that is now an event venue. Restaurants and hotels lie within walking distance, as do the Alamodome and HemisFair Park.

The Sunset Limited gets its name from its westerly course. The word “limited” is a term from the days when trains were the main way to get from town to town. A “local” train stopped at every community along the route, while a “limited” stopped at a few stations. ”We stop in Beaumont and Del Rio, though only for a few minutes;’ explained conductor Michael Kato. ”We stop longer in places like Houston and San Antonio and only at flag stops like Sanderson if there are passengers boarding or departing there.”

The stop in San Antonio lasted, in fact, about three hours, but because the train arrives before daybreak, passengers aren’t able to see much in that time. Some passengers choose to disembark here, to take in sites like the River Walk and the Tower of the Americas. We explored Sunset Station itself, admiring its Mission Revival architecture and the 1916 locomotive on display out front.

Meanwhile, back on the train, we settled into seats in the lounge car and watched as the outskirts of San Antonio slipped by the floor-to-ceiling windows. We also made our lunch reservations. All meals are included in the cost of a sleeper-car ticket and feature simple fare such as eggs and pancakes for breakfast, burgers and salads for lunch, and grilled fish and steak for dinner; vegetarian options are also available. Coach-class riders can purchase meals in the dining car, grab a hot dog from the snack bar, or bring their own food and drink on board.

Seated in the dining car at lunch, we shared our table with fellow passengers Harry and Colette Rosenbaum, a couple from England. “We’ve been visiting our daughter in The Woodlands,” Colette explained. “Now we’re taking the train to Los Angeles because we want to see a bit of the country.”

From our window, we all saw a good bit of Texas. First, we glimpsed the Rio Grande snaking in and out of view. Then, we streaked over the bright  turquoise waters of Lake Amistad. Shortly thereafter, we crossed the Pecos High Bridge and watched as the train cast its shadow on the Pecos River winding about 300 feet below us through a deep gorge.

Tuesday evening, we got off the train for two nights in Alpine. The train stops right in the heart of this arts-friendly West Texas college town, so being vehicle-free presented no problem for us. In fact, we found bookstores, art galleries, movie theaters, and restaurants within a few blocks of our accommodations—a spacious, modern suite with a private courtyard—at the historic Holland Hotel, which dates to 1912.

Back on the train on Thursday, we headed toward El Paso. The Davis Mountains reflected a soft orange-and smoke-colored sunset as we sped past a sign pointing the way to Marfa. Night fell, and we traveled in darkness until the flickering lights along the Mexican border signaled our approach to El Paso/ Ciudad Juarez. We hopped off the train at El Paso’s Union Passenger Station that evening, and took a cab to the Camino Real Hotel. The hotel dates to 1912, though the original building has been wrapped within a modern tower that overlooks El Paso’s sombrero-shaped convention center in the shadow of the majestic Franklin Mountains.

The next day, we strolled back to the train depot to study the restored 1906 red-brick structure, which is listed in the National Register of Historic Places, and then visited the Railroad & Transportation Museum of El Paso, a few blocks away. The small museum houses a beautifully restored 1857 locomotive—a rare example of a pre-Civil War steam engine—plus displays tracing train travel and its impact on El Paso. “In 1880, El Paso had 735 people,” Prince McKenzie, the museum’s director and curator, told us. “When the railroad came through in 1890, the population jumped to 10, 338.”

On Saturday morning, we took the hotel shuttle to the El Paso International Airport and caught our flight home. We’d ridden the rails more than 1,000 miles, most of them through Texas. Train, plane, or automobile—which do we prefer? For seeing the most of Texas with the greatest ease, we’ll take the train.