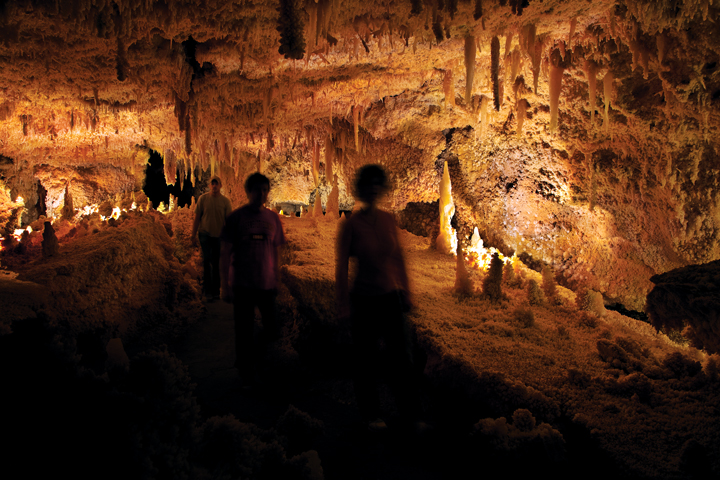 No rock in sight. Visitors follow a carefully established path through crystal-covered surfaces at the bottom of Caverns of Sonora. (Photo by Laurence Parent)

Some caves scatter their treasures over many miles of underground passageways. Not so the Caverns of Sonora in southwest Sutton County, which displays its beautiful, varied crystalline formations in a compact setting. Once you’re inside the “decorated” section of the cave, the space envelops you like a giant, sparkling geode. “It’s internationally recognized as the most beautiful show cave on the planet,” says George Veni, Executive Director of the National Cave and Karst Research Institute in Carlsbad, New Mexico.

The Caverns’ beauty lay concealed from human eyes for many years, even after its initial discovery in 1905 on the Mayfield Ranch by a sheepherder and his dog. Over the next half century, many a cowboy and local youth explored the dusty, 500-foot passageway that led to the brink of a seemingly impassable, deep pit.

In mid-August 1955, a trio of experienced cavers from Abilene—brothers Bob and Bart Crisman and their friend James Estes—stopped by the Mayfield Cave, as it was called then, after spending most of the day exploring another Sutton County cave. Unlike those before them, they spied a way around the pit, via a high ledge. Pressed for time, they didn’t proceed any farther. However, they shared their discovery with other cavers, and about two weeks later, five daring young Dallas men breached the chasm.

“I was first in line,” says C.E. (Jack) Prince, now a retired electrical engineering professor who lives in Austin. He says the transit, though tricky, was not as bad as it first appeared. “The ledge was rough, like sandpaper, not that easy to fall off of;’ he explains. With his back pressed tight against the wall of the cave, Prince inched his way to the other side, and then set up a safety line for his companions—Allen Cain, Pete Cobb, Jack Allen, and Claude Head.

Once across the ledge, the explorers were in for a surprise. ”We expected to just see more of what we had been seeing;’ says Prince. ”We were amazed at the way the cave was changing.” In place of barren, dry terrain, a marvelous realm of dazzling formations appeared before their headlamps as they ventured deeper inside.

Today, the tourist trail at the Caverns of Sonora runs alongside the 45-foot-deep chasm (called the Devil’s Pit), where, if you peer upward into the shadows, you can still make out the ledge Jack Prince and his friends crossed in 1955. Caverns guide Bill Sawyer points out the historic spot as he leads my husband, Walter, and me through the cave. So far, we’ve walked from the natural entrance along passageways distinguished by a few fossils and small, round formations called “cave popcorn” on the walls. But once around the pit and beyond the Sponge Rooms-so named because of their porous walls-the scenery magically transforms into the wonderland those early explorers beheld with such amazement. Sawyer tells us we’ve now entered the “active” part of the cave.

Here, a breathtaking array of formations-stalactites, stalagmites, flowstone, and more-continue their age-old process of growth, as acidic water slowly dissolves the surrounding limestone, beginning a series of chemical reactions that result in successive, ever-larger calcite deposits. Wet and shimmering, the fantastical shapes represent nature at work before our eyes. Walking through this part of the cave is like passing through gallery after gallery of a subterranean sculpture museum. “War clubs”—knobby, asymmetrical stalactites, or calcite formations that hang from the cave ceiling—give way to icy-smooth stalagmites, followed by a forest of rare “coral trees.”

Once the trail rises, offering a new perspective, visitors can glimpse passageways on four different levels of the cave. Moving along, we pass a clear, green pool and then encounter translucent “soda straws”-possible precursors to stalactites-many over three feet long, with water droplets clinging to them. Some of the soda straws have grown at an angle because of airflow, and drapery has formed on the bottom sides; these formations are called “angel wings.” Around the next turn, we’re standing in a space filled with some of nature’s most delicate and exquisite creations-helictites. These formations, which grow on cave walls and ceilings, take many different shapes- some are a riot of stems and curlicues, while others bear fanciful but appropriate names, such as “snake dancers” and “fishtails.”

When Walter and I marvel at the variety of formations in the cave, Sawyer says, “I’ve worked here 19 years, and I still haven’t seen it all.”

As we push farther along, landscapes from canyon-like vistas to intimate alcoves come into view, adorned with all manner and all sizes of formations, both smooth and textured. In one spot, “moon milk”—a calcium-magnesium material that’s paste-like when wet—appears to cascade from a hole above our heads. Elsewhere, strips of “cave bacon” cling to the ceiling, their contrasting color bands revealing stark changes in surface vegetation over the eons of their growth. Extraordinarily slow-growing monocrystalline (single crystal) formations, which look like slender, squarish stalactites, grow in an area called the Crystal Palace.

The Caverns’ lighting system showcases its treasures in a lustrous glow. The cave’s developer, the late Jack Burch, pioneered the concept of commercializing a cave in order to protect it. A caver himself, he created the trail and installed the lights with a few handpicked helpers. In anticipation of increased traffic, Burch also designed the special airlock doors that preserve the natural conditions (71 degrees, 98 percent humidity) needed to prevent the cave from drying out. The Caverns, which opened to the public in 1960, still reflects his vision.

As our tour draws to a close, we see the Caverns’ most beloved formation-a pair of fishtail helictites aptly named the Butterfly-the only formation of its kind in the world that can be viewed by the general public. The five-and-a-half- inch-wide phenomenon remains beautiful, but it’s also a reminder of human destructiveness In 2006, the Butterfly was vandalized. The upper half of its right wing was broken and carried off by a visitor; the perpetrator has never been caught. The incident brought Texas show-cave owners together to successfully lobby Texas lawmakers to make cave vandalism a felony.

We exit through the incongruously bare, yet intriguing, Belly of the Whale, an area where once-plentiful helictites were corroded away to the bedrock by airflow long before humans entered the cave. Leaving behind the Caverns’ underworld magic for the glare of day, I’m very conscious that there’s far more here than the eye can take in during one visit. I’ll be back.