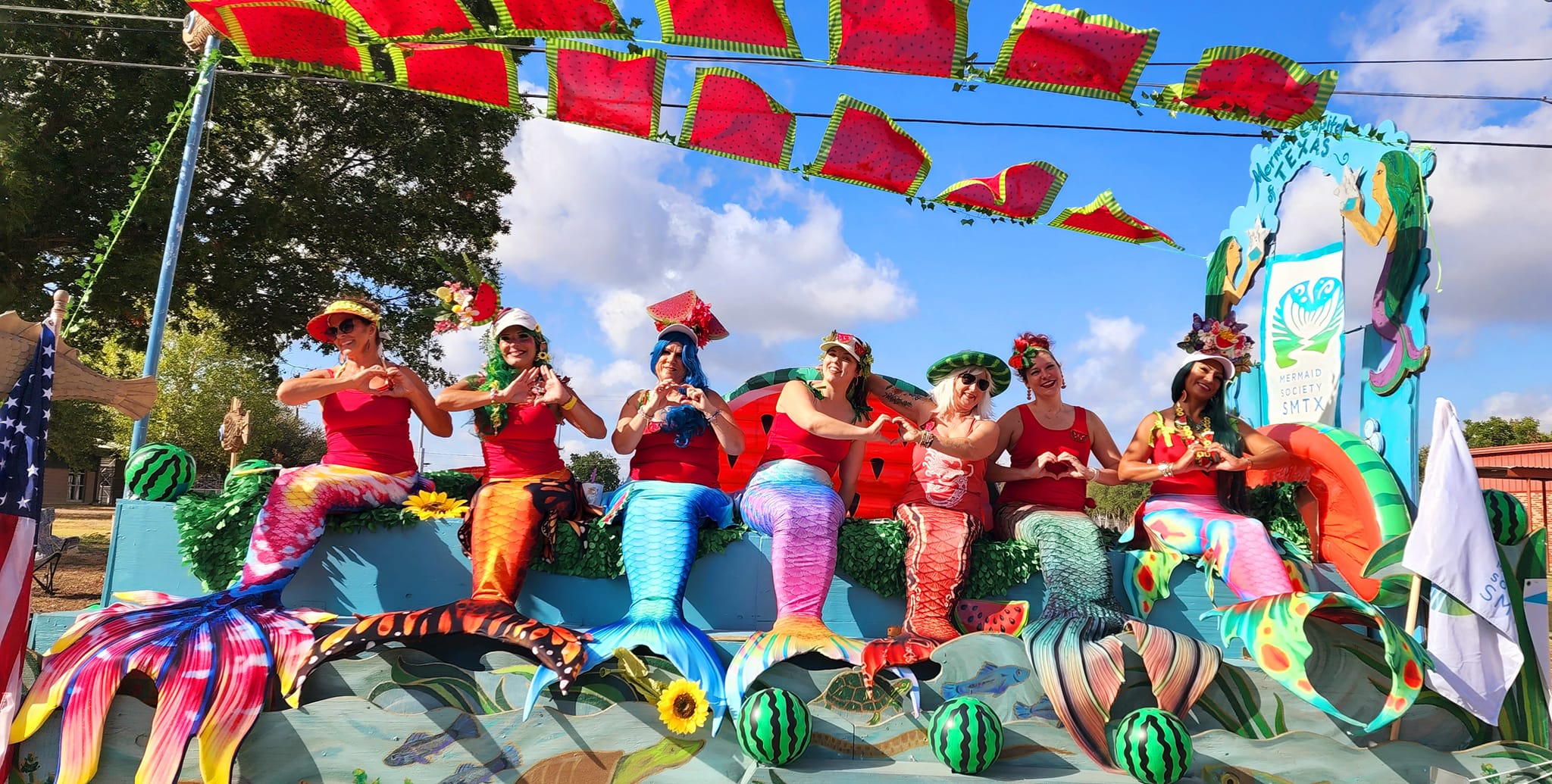 Participants in the Mermaid Promenade at the annual Mermaid Capital of Texas Fest in San Marcos. Photo courtesy Mermaid Society of Texas.

The refreshingly dark, cool interior of LaniKai Lounge & Tiki Room in San Marcos features paintings of beach scenes, a constellation of jewel-toned lights overhead, and a playlist featuring surf guitar music and retro standards, all conjuring dreams of tropical getaways. As I sip an icy combo of sparkling wine, white rum, and pink lemonade called Mermaid Lemonade, I note how the cocktail’s playful rhyming name not only fits perfectly with this new bar’s overall vibe but also adds to the mermaid culture that the city has embraced since the 1950s.

In May 2021, the Texas Legislature made it official and gave San Marcos the designation of “Mermaid Capital of Texas.” And September is “Mermaid Month,” when the city celebrates the mythical creature with a lineup of events that includes the educational River Guardianship Symposium on Sept. 13, as well as plenty of mermaid-themed promotions from local businesses, some with “living” mermaids.

The high-water mark of Mermaid Month is the sixth annual Mermaid Capital of Texas Fest on Sept. 24, featuring the Mermaid Promenade and Downtown Street Faire, where typical mermaid and mermen costumes worn by participants rival anything seen at Mardi Gras. Up to 5,000 visitors are expected this year.

“This mermaid festival has always been one of my favorite events,” says Hannah Rucker, news and traffic anchor for KVUE Daybreak in Austin and 2022’s grandstand announcer for the Mermaid Promenade. The Texas State University graduate says with all the “vibrant colors and sparkles, the town really feels dreamier than usual. It’s a full-circle moment coming back to San Marcos, where I first got started in broadcasting.”

Following the parade, the streets of Courthouse Square feature live music, food trucks, and arts and crafts. Mermaids, young and not-so-young, will be everywhere.

Behind this current wave of local mer-thusiasm stands July Moreno, who created the Mermaid Society of Texas in San Marcos in 2016. As its executive director, she champions the mermaid as a symbol for stewardship of the San Marcos River.

“I think that spirit has grown since we opened,” says Moreno, adding that the society partners with various organizations, including the Texas Commission on Environmental Quality and the Meadows Center for Water and the Environment, to boost environmental awareness of local waterways. “We play one part within this community, but collectively we’re covering as much as we can.”

But the mermaid, Moreno believes, is even more than an eco-warrior. Its image is found in both public art (10 7-foot-tall mermaid sculptures are located throughout San Marcos) as well as in several business names and logos (Mermaid Dental opened in late August), making the mermaid a community-wide symbol for, in Moreno’s views, growth of small businesses and artistic expression.

And—as there can be no doubt—the recognition of local history.

Mermaid nostalgia is a real thing in San Marcos because of the long-closed but fondly remembered Aquarena Springs, a popular theme park that opened in 1951 and included glass-bottom boat tours of Spring Lake, which forms the headwaters of the San Marcos River, Ralph the Swimming Pig, and an underwater show with costumed mermaids and mermen frolicking in crystal clear waters. The park closed in 1996, but those golden-hued days remain fresh in local memory, not only from former visitors but from dozens of Aquamaids (as they were called) who still call San Marcos home.

To use Moreno’s words, Mermaid Fest is an “identity destination event.” As for its future, after my last sip of Mermaid Lemonade at LaniKai Lounge, I conclude that it’s a safe bet that this whole mermaid thing has the legs to go the distance.