With the Cowboys moving in, this Metroplex destination is rewriting history

I’m standing on the highest point in Tarrant County—a hill overlooking the western sweep of Arlington—noting that overgrown trees hide the suburban development that fills the land below, just north of Texas 180. I’m happy to miss the recent construction, because I’m imagining the perspective this same view offered 75 years ago. 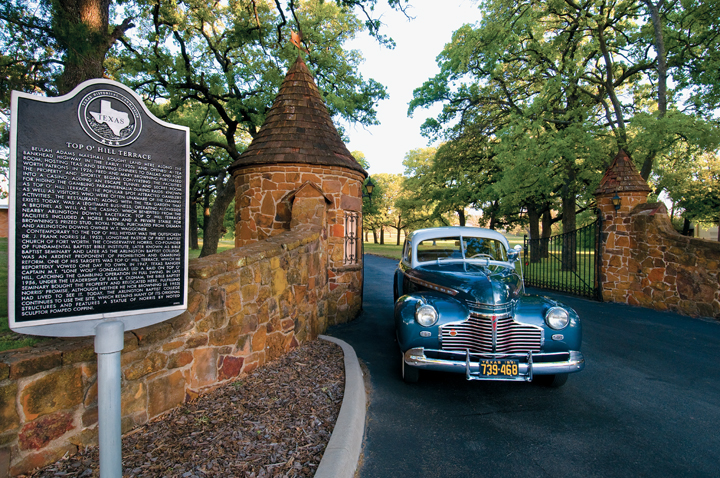 This site is the tea garden of Top O’ Hill Terrace. Even though the buildings and grounds now define the campus of Arlington Baptist College, Top O’ Hill lives in local history as a glamorous, yet notorious, casino and nightclub that raised eyebrows during the 1930s and ’40s: Renowned boxers rubbed shoulders with local big shots and all joined shady characters on the sly to play cards, roll the dice, and live the high life.

Arlington is now the seventh-largest city in the state with a population of nearly 400,000, but the city still works hard at redefining itself and knows how to draw a crowd.  As I learn more about Top O’ Hill Terrace, as part of Vickie Bryant’s 90-minute private tour, I’m realizing that drawing a crowd is not a newly discovered skill in this pocket of the Metroplex.

I’m part of a group enjoying Vickie Bryant’s 90-minute private tour of Top O’ Hill. In this pastoral setting, with a few choice stories to spur the imagination, the past-and the characters that inhabit it-seems very close. And that’s mostly the result of Bryant’s diligent research, gathering oral histories from the few still living who remember the place, and collecting artifacts of that fast-life era.

How can a Baptist College thrive in a campus with such a checkered past? No one ponders this question more devoutly than Bryant. “Here I am, a preacher’s wife;’ she says, “and I’m telling stories about gamblers and ladies of the evening.” In order to bridge the philosophical split between gambling and religion, Bryant has coined the theme “From Poker to Preachers,” and conducts by-appointment-only tours that bring attention to the racy stories, replete with escape tunnels and secret passages. One display features a luxurious Neiman-Marcus cape once worn by one of the “working girls” but appropriated by an early woman of the church college. “We felt like it was OK to exhibit the cape because she wore it to church and it was sanctified,” Bryant explains.

We’d love to hear more about Top O’Hill, but must move on to explore the dramatic contrasts of Arlington today. Just five miles away from the modest Arlington Baptist College, we’re gazing in amazement at one of the most over-the-top building projects in the state, if not the world: the new stadium home for the Dallas Cowboys (officially named Cowboys Stadium). When America’s Team plays its first game here in August 2009, this monumental structure will have swallowed up over $1 billion.

As our little group contorts ourselves into safety vests and resizes the hard hats in preparation for touring the building, Dallas Cowboys Communications Director Brett Daniels reels off statistics: biggest arches, 100,000 seating capacity, 3,000 video monitors, largest video display scoreboard unit in the world. As we make our way to the arena field, we see swarms of tradesmen clamoring around every nook of the monstrous structure to make sure the building is ready for the opening event in early June-country star George Strait. I can’t help noticing that Daniels looks over his shoulder as he mentions that Cowboys owner Jerry Jones could show up at any time to check the progress on his pet project. The boss knows how to make his presence felt, whether he’s there or not.

The soon-to-be lavish suites, deluxe locker rooms, and cavernous interior hallways (two 18-wheelers can park side by side in the enormous tunnel that taps into the service entrance) make it clear that this is not just a monument to football, it’s a monument to full-scale spectacle. When I stand on the field and look up at the seven-story-high, flat-panel video screen (160 feet long and 72 feet high), I’m not imagining a gigantic instant replay, rather I’m anticipating Bono and Edge appearing many times larger than life when U2 takes over the building in October of this year. The two screens facing the fans require their own elevator to access the seven interior floor levels. The scoreboard assembly, which includes the two large screens and a
smaller screen facing each end zone, cost something like $40 million more than the entire Texas Stadium that the Cowboys are leaving behind in Irving. And this stadium represents another coup for Arlington, which now might be called America’s Town, to accommodate America’s Team. Arlingtonians already host America’s Pastime right across the street at the Rangers Ballpark, where the Texas Rangers took on (and defeated 9-1) the Cleveland Indians in the opening-day game. We visit the ballpark neighborhood midmorning, and tailgating fans are partying in full swing: smoking grills, music, general frivolity. It’s an uncharacteristically chilly, late-spring day, and the grills are attracting partyers who keep warm as they enjoy their revelry.

As we make our way to the field, the flyover of B-2 bombers sets off car alarms across the parking lot. On the way to our seats, one of our group insists on locating a particular concession stand that grills onions perfectly for the hot dogs and serves them up with aromatic garlic fries. And, once settled in the stands, rabid fan or not, there’s nothing like the methodical pace of a baseball game to transport you to a more relaxing dimension of the American Experience.

From the ballpark, it’s easy to see the attraction that first made Arlington a popular destination (after Top O’ Hill, of course): Six Flags Over Texas. The Texas Giant and the Titan stand quiet today because it’s a weekday and the park opens full-time later in the spring. We made our visit to the park the day before-on a Sunday afternoon-and spent a few hours taking in the attractions of Festival Latino, including a lowrider parade complete with vehicles jumping off the ground.

For an alternative afternoon’s entertainment (particularly on a hot day), the University of Texas at Arlington Planetarium offers welcome respite. We lean back in hyper-comfortable chairs to experience a film that explains Egyptian astronomy. I am completely transfixed, and although the trailer for the film about the Mayan culture tempts me, we have another destination downtown.

As the afternoon fades, we drive to central Arlington to take in an early-evening performance at the Levitt Pavilion, one of only five such performance venues in the country. A cordial crowd settles into lawn chairs and onto blankets to relax and visit as children chase each other around the edges of the gathering. A family Texas Swing act, the Que be Sisters, brings those assembled to life with its three-fiddle renditions of the Swing standards.

The Levitt Pavilion, a key component of Arlington’s downtown redevelopment, draws members of the surrounding community together to share musical events, and the setting reminds me of the old-fashioned bandstands in parks and plazas around the country. This is another way Arlington is redefining itself and embellishing its history.