As Texas Clubs and Musicians Struggle to Host Live Shows, One Sure Bet Is Grateful Fans

Amid pandemic woes, 'Several folks told me they cried during the gig because they were so overjoyed to hear live music again.' 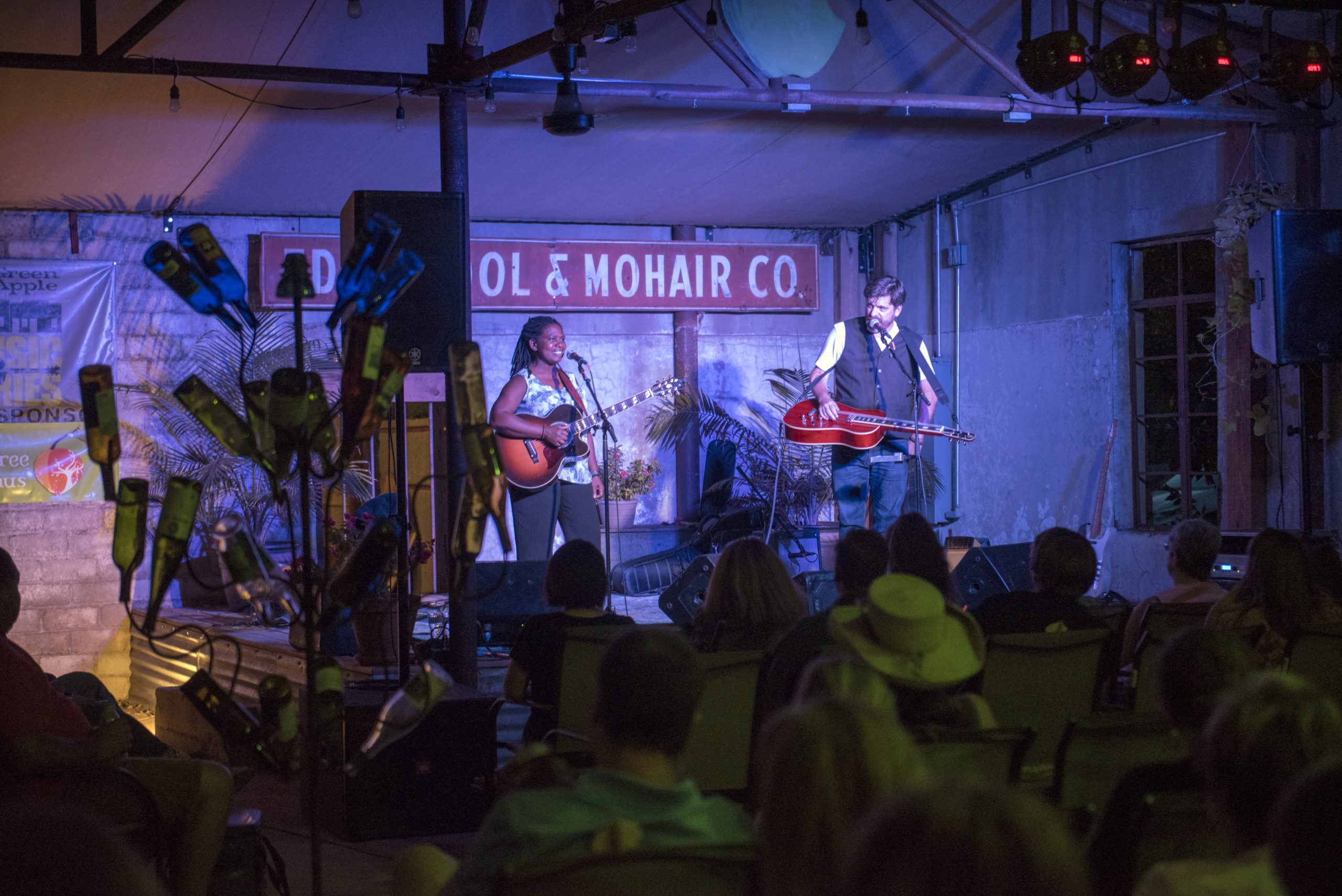 Ruthie Foster and Jeff Plankenhorn perform at the Green Apple Art Center in Eden, in 2019. Because the venue is partly outdoors, it has been able to host shows during the pandemic. Photo by Kevin B. Stillman

When Kevin Russell declared “my business model has been ruined” by Covid-19 on social media a couple months ago, the front man for the Austin band Shinyribs could have been speaking on behalf of almost everyone involved in live music in Texas.

The days and nights of the pandemic have been bleak for the thousands of musicians, waitstaff, bartenders, audio engineers, club managers, and venue owners whose careers are built upon live music venues—a collection of small independent businesses at the state’s creative heart. Musicians may be itching to play for an audience, but up until recently, almost every music club had been shuttered since the spring lockdown.

Now, even as the pandemic surges again, music and musicians are gradually—and for the most part, cautiously—returning to stages, and drawing paying customers eager to hear them.

“It’s been a trying year,” says Craig Pfluger, manager of the Green Apple Art Center in Eden “I’ve rescheduled some shows twice. But we had 90% our yearly revenues in hand before this started. No one has asked for their money back. We will survive. It sickens me to think of how many Texas music venues will not.”

It’s a tricky situation, as is most everything relating to Covid-19. Music clubs are marginal operations even during the best of times. Those clubs that have reopened are subject to capacity limits set by the state, currently 25% to 50% depending on the venue. Limits vary depending on whether outside seating is available and whether the venue is classified as a bar. Yet they must remain flexible in the coming months as the pandemic shifts.

Several high-profile venues—including Antone’s in Austin, The Kessler Theater in Dallas, and Gruene Hall in New Braunfels—have reconfigured their seating. Rather than selling individual tickets, they’re selling group tickets for tables, which can seat several guests.

Every owner and manager has been forced to recalibrate, says Edwin Cabiniss, who owns The Kessler in Dallas and The Heights Theater in Houston. The Kessler is functioning with a capacity of 128, rather than the usual 577 limit.

“Reduced capacity, and masking as you move to your socially distanced pod, have set the venue up for safety,” Cabiniss says. “Having clear communications with set expectations—from pre-purchase to arrival, through showtime and exit—has led to really good patron behavior. It feels really safe without losing the great vibe. This model is not a long-term solution, but will help see us through.” 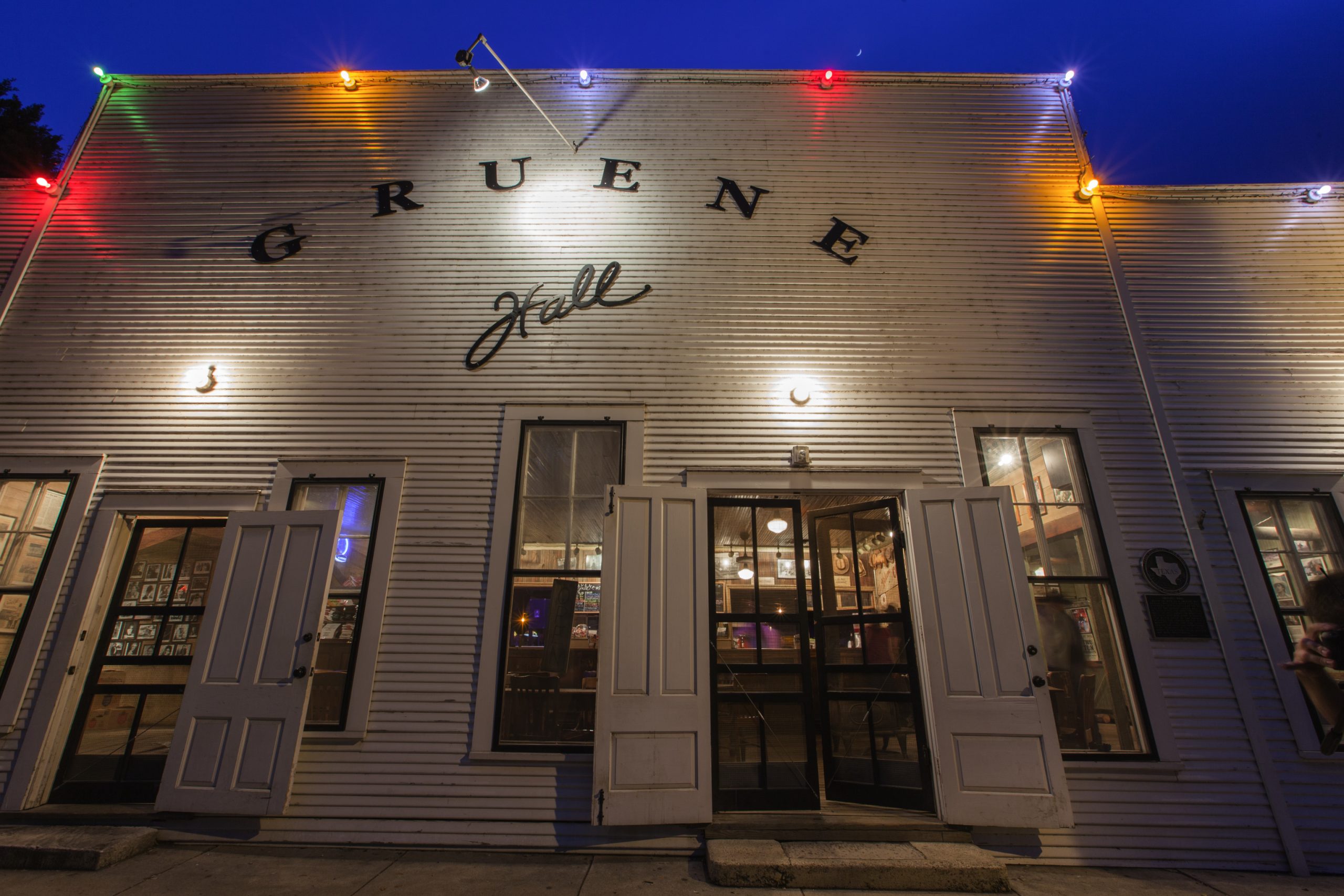 Gruene Hall has limited attendance for its live bands and allows dancing outside. Photo by J. Griffis Smith

Gruene Hall—“Texas’ oldest dancehall”—replaced its long tables with barrels that function as tables with no more than six chairs. The tables are all at least 6 feet apart and 10 feet from the stage, says booker Tracie Ferguson. The hall is hosting live music shows seven days a week with two bands on Saturdays and Sundays, she says, although performances are restricted to the main stage.

Gruene Hall allows dancing outside, so long as dancers stick with their group, wear a mask, and maintain 6-8 feet distance from others. And, musicians and hall employees are screened before shows. The hall, which limits capacity to 50 percent, has also booked more acoustic shows to foster more of a listening atmosphere and less of a rowdy party.

Most people have been cooperative—but not everyone.

“We have had a couple of the rowdier young Texas-country bands ignore the rules towards the end of their show, getting on the mic and urging everyone to get up and dance,” Ferguson says. “I can’t say for sure, but it’s very unlikely that either of these two bands will be asked back during COVID protections. There has been a fair amount of rebellion from anti-maskers [in the audience]. People that won’t comply are asked to leave. This has caused some people to get quite angry. We also have security officers on duty who put a stop to anything that might potentially get out of hand.”

In the Woodlands, the Dosey Doe singer-songwriter listening room reopened for shows in June, but has focused on booking Texas-based bands, rather than national touring acts, until later next year, manager Brad Said says.

The Bugle Boy in LaGrange, another intimate singer-songwriter listening room, has been shuttered since March. “Unfortunately, with Covid restrictions, we could only seat about 15 to 18 people, so we’ll remain closed through the end of the year,” says Heather Allbright, operations director of the Bugle Boy Foundation, which operates the nonprofit room. In the meantime, the Bugle Boy has streamed weekly online acoustic acts, such as Trout Fishing in America and Terri Hendrix, with the shows underwritten by donations from viewers.

In Eden, east of San Angelo, another small-town nonprofit music venue, Green Apple Art Center, closed out a truncated 2020 season for subscribing members on Oct. 10 with Hayes Carll and Allison Moorer. After the season’s opening show in late February with Beat Root Revival, performances at the outdoor-indoor venue were cancelled until summer, when the season resumed, Pfluger says. But the Green Apple reduced attendance by about 40% from its normal 170 capacity, and each show was green-lighted by the mayor. The usual pre-show buffets were cancelled.

Some venues have responded with creative duct-tape solutions.

David Card of the venerable Poor David’s Pub in Dallas, is accommodating up to 25 ticket buyers to attend the weekly streaming concerts from the club. Abbey Road of the Coupland Inn branched out to introduce a jerky and barbecue sauce line for an added income stream.

Railroad Blues in Alpine in West Texas, which has been hit particularly hard by the second wave of the pandemic, has yet to resume live music, but now that a food truck is on premises, it’s a matter of time before bands start to play. 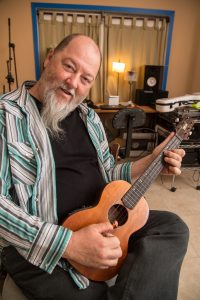 Kevin Russell of Shinyribs has worked to broaden his performing outlets during the pandemic. Photo by Will van Overbeek

To keep playing during the pandemic, musicians have had to harness their creativity to find safe ways to perform. Russell, of Shinyribs, has done everything from weekly solo shows online to outdoor house concerts to drive-in concerts. The Shinyribs big band, which includes backup singers and a horn section, were one of several performers taking place at the Love and Lightstream drive-in concert series at the 17-acre outdoor Haute Spot in Cedar Park.

“I’ve had to learn to not hug people or shake hands, which is difficult for me,” Russell says. “We bring our own mics. Our stage person sanitizes his hands before he positions them. We were doing the alcohol wipes already, a good habit to avoid colds and flus. We are operating on the assumption that outdoors is pretty damn safe if you distance from each other. Indoors with low capacity is questionable. I try to keep those to a minimum. And I only do them solo or with a trio, and no horns. Because those horns are fountains of aerosolized funk under normal conditions.”

Mike Flanigin, a B-3 organ player, says he’s encountered grateful and safety-conscientious audiences while playing shows during the pandemic at Antone’s and the Sagebrush, both in Austin.

“They’re larger venues that have the space and have taken the time to do it right,” Flanigin says. “Several folks told me they cried during the gig because they were so overjoyed to hear live music again. It’s hard to overstate how important it seems to be to people at this time, after so long without it. It’s good for the soul. I need it. The people need it. More than we all realized.”