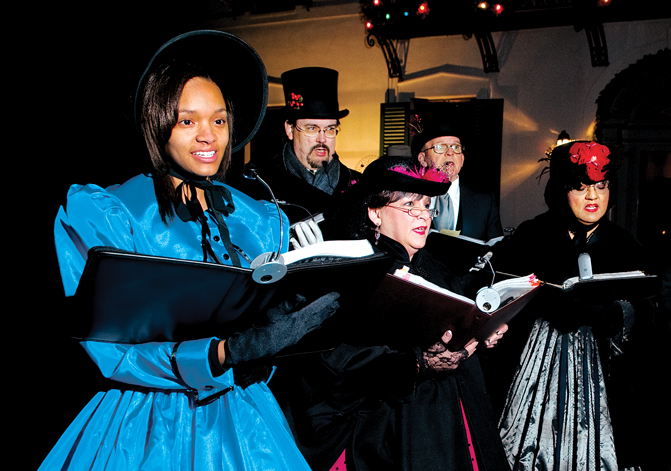 ‘This is what Yuletide is all about, bringing history to life and creating ‘light bulb’ moments of understanding.’ 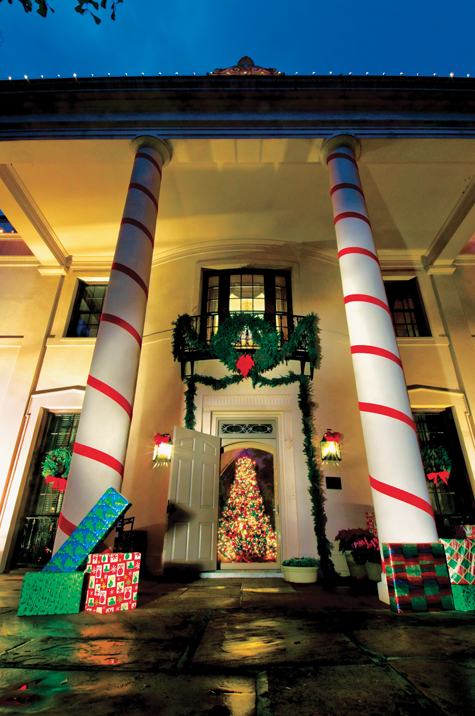 Surprise is at the heart of Yuletide at Bayou Bend, an annual Houston tradition that draws thousands of visitors to the home of one of the state’s most beloved philanthropists, the late collector and patron of the arts Ima Hogg. Festive decorations enliven the exterior of the famous pink stucco mansion, but inside, guests receive unexpected gifts of the unusual, the beautiful, and the educational.

Every holiday season since 1989, eight first-floor rooms in the sprawling home have become snapshots of the country’s social history. Each vignette is authentically recreated by docents who meticulously research a theme—birthday parties, weddings, funerals, graduation ceremonies, and the like—and use the museum’s priceless collection of furniture and household wares to bring it to life.

The attention to detail has had a few unexpected results, recalls Kathleen O’Connor, Bayou Bend’s curator of education.

Halfway through a tour one year, a little girl came running in from an adjoining room, shouting, “Mommy! Mommy, I didn’t do it!”

Any parent with a small child knows immediately this does not bode well—especially while standing in a house filled with irreplaceable antiques. And while she chuckles now, O’Connor remembers it as a heart-stopping moment.

And yes, the room from which the girl had fled held a collection of priceless furniture, porcelain, and paintings. Broken glass littered the floor. A centuries-old chair lay on its side. Other things were in disarray. Fortunately, it was as it was meant to be.

“That year, we did one setting based on events during the Boston Tea Party,” O’Connor explains, noting that two of the paintings on display were by the son-in-law of a Boston tea merchant. “During that time, people in Boston had attacked that merchant’s home, so we re-created the scene after the attack. We had the chair knocked over and faked a broken window. This little girl stared at the mess for a few minutes and then wanted to make it clear she had nothing to do with it.”

Fortunately, the decorating theme this year focuses on Christmas and Thanksgiving celebrations at different times in history, a concept less likely to result in any childhood misunderstandings or bouts of parental panic.

There could hardly be a more warm and welcoming place to host this popular event than Bayou Bend. Designed by famed architect John F. Staub, the home was begun in 1927 for Ima Hogg and her two brothers, children of former Texas Attorney General and Governor James Hogg. The three took up residence in 1928, but one brother died
unexpectedly shortly thereafter, and the other soon married and moved to his own home. Miss Hogg remained until 1965. In 1957, she donated Bayou Bend, along with its collections of American art and antiques, to the Museum of Fine Arts, Houston. The home opened to the public in 1966; Ima Hogg died in 1975.

Beginning in late November and continuing through Jan. 3, Bayou Bend features festive emblems of the season in a celebration known as Yuletide: Holiday Time at Bayou Bend. Urns planted with red poinsettias line pathways, wreaths accented by pine cones and berries hang on windows, and twinkling lights, red ribbons, and scattered packages create a lively mood. Visit during the day, and you’ll have time to enjoy the tranquility of the 14-acre estate, to ask questions of the docents, and to take in the elaborate displays at a slow pace. But for many visitors, the event’s highlights are the Candlelight Tours—jolly parties by any definition—held the first three Thursday and Friday nights in December.

A Candlelight Tour snapshot: Hundreds of people gather outside on the circular driveway by the time the tours begin at 5. Volunteers pass out cups of hot cider as a small choral group sings “Deck the Halls” and “Silent Night,” along with less-familiar English folk songs. A 10-foot puppet—depicting a gingerbread man or Father Christmas, perhaps—bobs through the crowd as children giggle or hide shyly behind their hands.

“As the event has grown, we’ve seen people start to make it an annual family ritual,” O’Connor says. “It’s nice to be a part of someone’s family tradition.”

On entering the central hall of the home, visitors stand before a gloriously decorated tree, its top well up to the second stair landing. More than two thousand ornaments fill the tree so that the branches are barely visible.

Once a decorating theme is chosen each year, docents study diaries, letters, photographs, and other documentation that describe certain rooms or settings. For last year’s “Celebrations” theme, visitors journeyed to a 1700 Puritan wedding reception and an 18th-Century christening party, and viewed a vignette based on the first Hogg family breakfast at Bayou Bend some 80 years ago.

Longtime docent Sally Luna, who created the breakfast vignette, says, “This was a fascinating experience. Information about the event was scarce: We knew it was early November in 1928. We knew there were four people at breakfast—Ima Hogg and her brothers, Will and Mike, and a business associate of Will’s, Raymond Dickson. In the guest book, Will had written that it was election day. This was a very controversial presidential election—Herbert Hoover vs. Al Smith. Al Smith was the Democratic nominee.”

Luna spent hours researching whether or not there would have been a radio in the room. The consensus was yes for the family of staunch Democrats. “It was the first election to be broadcast across the country,” she says. “The Hoggs would have had a radio.”

“Some of our meetings can be very strange;• says O’ Connor. “What would you think of a table full of people spending 40 minutes arguing about what 19th-Century lemon pudding would look like?”

With a number of major projects in the works for Bayou Bend, including a new multimillion dollar visitor and education center, the theme this year is re-creating some of the most popular vignettes in the event’s 20-year history.

Visitors will witness, for example, a large parlor that re-creates an elegant 1950s Houston living room at Christmas, as well as Ima Hogg’s library as she would have used it during the holidays in the 1930s and 40s-tea is set up for guests, accompanied by faux pimiento cheese sandwiches, deviled eggs, and fruitcake. Other Yuletide displays include a Colonial Revival interpretation of a Puritan harvest festival and a re-creation of George and Martha Washington’s 17th wedding anniversary/Twelfth Night celebration in 1776, complete with a dinner table laden with a realistic faux feast of ham, roasted goose, fried celery, and a huge Christmas pie.

“The most fun thing about Yuletide,” says Luna, “is that it allows us, for six weeks, to tell social history by re-creating actual historical moments. It is the most challenging, fascinating job I have ever done.”

“We mostly learn history by reading,” says another longtime docent Kay Handley. “At Yuletide, we can use objects to show what people were doing. This is what Yuletide is all about, bringing history to life and creating ‘light bulb’ moments of understanding.”

Call or check the Bayou Bend Web site for details about visiting other times of the year.