Beware the Ghost Fiddler of the San Bernard River 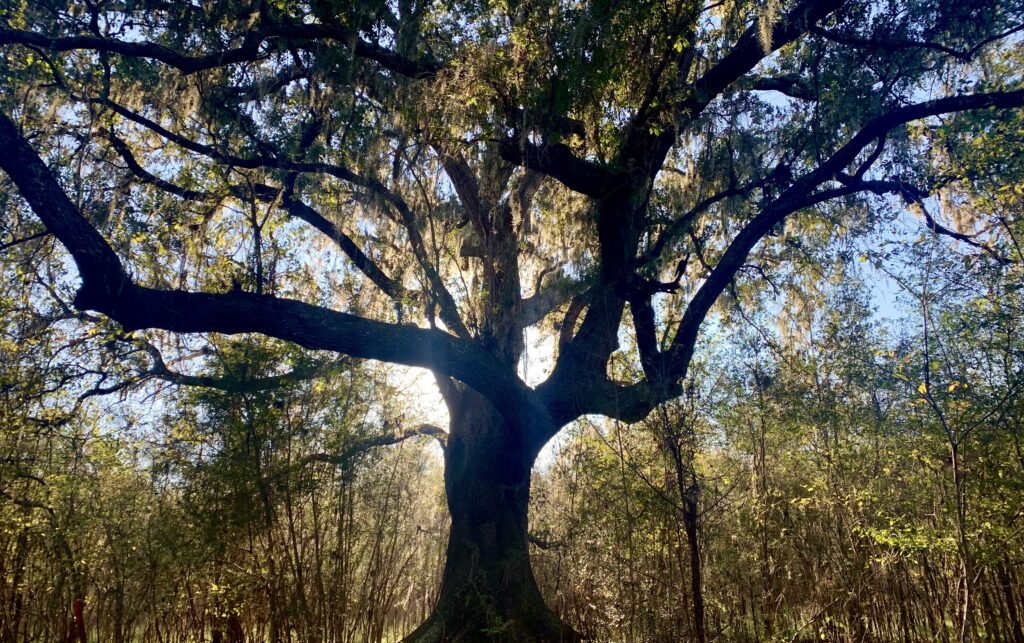 A a gnarled old oak tree in Brazoria County, where the Ghost Fiddler of San Bernard haunts with his eerie sea shanty. Photo by John Nova Lomax.

Settled by some of the first of Stephen F. Austin’s Old Three Hundred colonists 200 years ago this year, Brazoria County has an edge over other Texas counties in the ghost story department. Such tales tend to pile up with age, and that is certainly the case here.

With the southwestern quadrant of the county’s flat landscape covered in gnarled and ancient Spanish moss-draped live oaks, a spooky vibe pervades, especially when the cicadas thrum their rhapsodies and the barred owls caterwaul high in the bearded trees. Just pondering its brutal history—vast slave plantations reborn as prison farms, blood feuds, massacres of Karankawa Indians, deadly hurricanes, and epidemics—is enough to haunt you.

And so we have many tales: the Ghost Hounds of Orozimbo; John Jackson, whose ghost wanders the shores of the lake that bears his name in search of his head; a haunted slave cemetery in Lake Jackson, right next to bustling Brazos Mall; the Lady in the Gray Taffeta Dress of East Columbia; Brit Bailey, who was buried standing up and facing west on the prairie, wandering by night, rifle tucked under one arm, a jug of whiskey in hand; and the Ghost Fiddler of the San Bernard, one of the more detailed—if little known outside of the immediate area—haunted Texas tales.

There are several versions, but the short rendition goes something like this: In the 1820s, a pair of fishermen took up residence on a small island near the mouth of the San Bernard River. One of them was a fiddler, and at some point, he ran into a tune he simply could not master. Day and night he sawed at his violin, screeching the same notes over and over. It eventually drove his friend so mad, he buried a hatchet in the fiddler’s skull and tossed him and the instrument in the river. To this day (though far less commonly than in the past), some canoers, kayakers, and local residents claim they can hear music coming from Fiddler’s Island in Music Bend, a couple of miles upriver from the open Gulf.

“It sounds like very stylized, synthesized violin music,” says Jan Edwards, a resident of River’s End, the closest community to the scene of this haunting. “It gave me goosebumps. My husband and I thought there was a radio on but we never did find one.”

This version is a Cliff’s Notes explainer compared to the embellished stories that have developed over a couple hundred years, like the following tale.

In Jean Lafitte’s heyday as pirate king of today’s Galveston Island (circa 1817-21), the Frenchman had a small fleet of ships under his command. Very near the end of his stay there, he received word of a trove of silver left under inadequate guard just across the Mexican border. Because that country was then in the throes of revolution, Lafitte figured his men might make easy pickings of that treasure, so he sent a raiding party to collect it. The theft was a success, but just as the ship was almost back to his lair, Lafitte received a message that a flotilla of American warships was coming to arrest or kill him. It was time to leave, but before sailing away, he reportedly sent a boat down the coast to intercept the treasure-laden bunch.

Lafitte’s orders: The heat is on, so sail into any harbor and await further instructions.

Since they happened to be at the mouth of the San Bernard, the raiders waited it out there. And waited, and waited until the crew was almost out of food and fresh water. The captain decided they would have to go back to Galveston or perish. Assuming they had not heard from Lafitte because he had fled or met a bad end, the captain reasoned Galveston would therefore be under American control. He could not very well go simply sailing into harbor with a hold full of stolen silver.

So, he devised a plan. They would bury the loot on an island (that is, Fiddler’s Island). Left to guard it was an unnamed youth, a prodigy on the fiddle. The captain entrusted him with a musket, shot, and gunpowder, and he was to guard the stash. If and when he saw people approaching, he was to pick up his fiddle and play a few notes of the crew’s favorite sea shanty. He would then stop, and if the men were part of their crew, they would whistle the last few notes. If they could not, then the fiddler was to shoot them.

All very clever, but all to no avail, as the entire crew was arrested on arrival in Galveston and variously imprisoned or pressed into service of the U.S. Navy. Lafitte perhaps heard of the crew’s fate, but not the fiddler scheme, so he wrote the whole thing off as a sunk cost and sailed off into his destiny.

Some time passed, and eventually the vanguard of Austin’s Old Three Hundred began trickling into Matagorda and Brazoria counties. At the northern tip of Matagorda Island, they came upon a Robinson Crusoe-style castaway living in a shack cobbled together out of driftwood and seaweed. This man told them he had served aboard Lafitte’s doomed treasure ship. He said he had been held against his will somewhere in the Caribbean for several years; how he wound up back on the Texas coast is not clear.

He also told them of the fiddler/sentry (who apparently had died not long after his abandonment) and the buried loot. He warned them that he himself had tried to row over to the island and dig up the treasure, but each time, as he approached, he would hear eerie violin music: the sea shanty he once knew but had since forgotten. And because he could not furnish the ending this phantom fiddler had sworn to require, the music would grow more and more frightening the closer the castaway came to shore.

Greed breeds courage, though, and eventually the man steeled himself against the terrifying fiddle long enough to land on the island and hack around the brush, desperately trying to remember where they’d buried the treasure, all while the terrifying music was driving him to the brink of insanity. He came to believe he was hearing a voice threatening a terrible fate, and finally he saw the ghost of the fiddler itself, the scowling expression on its ghastly face sending him running back to his boat in terror, never to return to the island.

Many early colonists believed the castaway’s tale about buried treasure but scoffed at his ghost story, only to find out the hard way that the closer they got to the island, the more and more insistent the fiddle music became. No treasure has ever been found, and it is said that unto this day, some who’ve never heard a word of this tale return from Fiddler’s Island claiming to have heard ghostly music.

Pirates! Buried treasure! Mysterious castaways warning intrepid investigators away! It all sounds very Scooby Doo. So let’s be meddling kids, pull off the mask, and find out what was really creating that bizarre music.

As with the Marfa Lights and the Saratoga Ghost Light of the Big Thicket, this is one of those paranormal phenomena that really does have some basis in fact, a scientific explanation that also could explain why reports of the ghost fiddler’s music are now far more sporadic than they once were.

A few theories have been proffered over the years. Some say it was the trill of the San Bernard’s waters as they crossed the sandy shallows and met the open Gulf—the San Bernard is one of only a few Texas rivers to flow directly into the sea as opposed to a bay. However, despite periodic dredgings, silt from the Brazos continually blocks the river’s passage, sending the San Bernard’s outflow into the Intracoastal Waterway. So, no longer is it channeled through a melodious narrows.

Others claimed it to be the sound of gulf breezes whistling through oyster reefs at low tide, when the rich beds of bivalves would be partially out of the water. According to local lore, these beds were destroyed in an Army Corps of Engineers river-straightening project about 60 years ago.

The late local historian, school librarian, and ghost story collector Catherine Munson Foster chalked up its demise to modern life. “Unfortunately, the music has not been heard in years, perhaps because the once green and somnolent river has become a busy thoroughfare,” Foster wrote in her 1977 book Ghosts Along the Brazos. “With all the barges, outboard motors, and water skiers, it would be hard to hear the phantom fiddler even if he is still playing.”

Long ago Bertha McKee Dobie, who grew up in Velasco before she went on to marry J. Frank Dobie and become a folklorist in her own right, quoted a fellow Velasco woman thus: “According to Mrs. West, the fiddler never plays for those who laugh at it or doubt it. But those who row out over Music Bend with an open mind may hear music sweeter than any made with human hands.”

One such is open-minded person is Edwards, the resident of River’s End and administrator of the San Bernard River Facebook page. She says she’s heard him not once but twice. “He plays rarely and only for the few.”

Fiddler’s Island is no longer an island. The channel was filled in during the 1950s and today what was once the island is now on private property. To reach its site, head west on Farm-to-Market Road 2611 to a hard left turn, whereupon the road changes to Farm-to-Market Road 2918. Drive south through the Churchill community until just before you get to River’s End, which stands on Music Bend. Turn around at the Volunteer Fire Department. As you drive slowly back the way you came, what used to be Fiddler’s Island will be to your right.

For a deeper dive into other ghost stories of the Brazos and San Bernard rivers, take in the Haunting Tales of the Texas Coast exhibit at the Freeport Historical Museum. But hurry, the exhibit runs through 4 p.m. this Saturday.

To get a sense of what life was like for the unlucky fiddler and that beach hermit, take a car tour and/or short hike in the San Bernard National Wildlife Refuge immediately to the west of FM 2918. Watch for gators, snakes, deer, armadillo, wild hogs, coyotes, and migratory birds by the thousands—and maybe you’ll hear ghostly fiddle music if you’re lucky.