Celebrate the champion of Latino literary arts by participating in a second line on Aug. 13 in El Paso 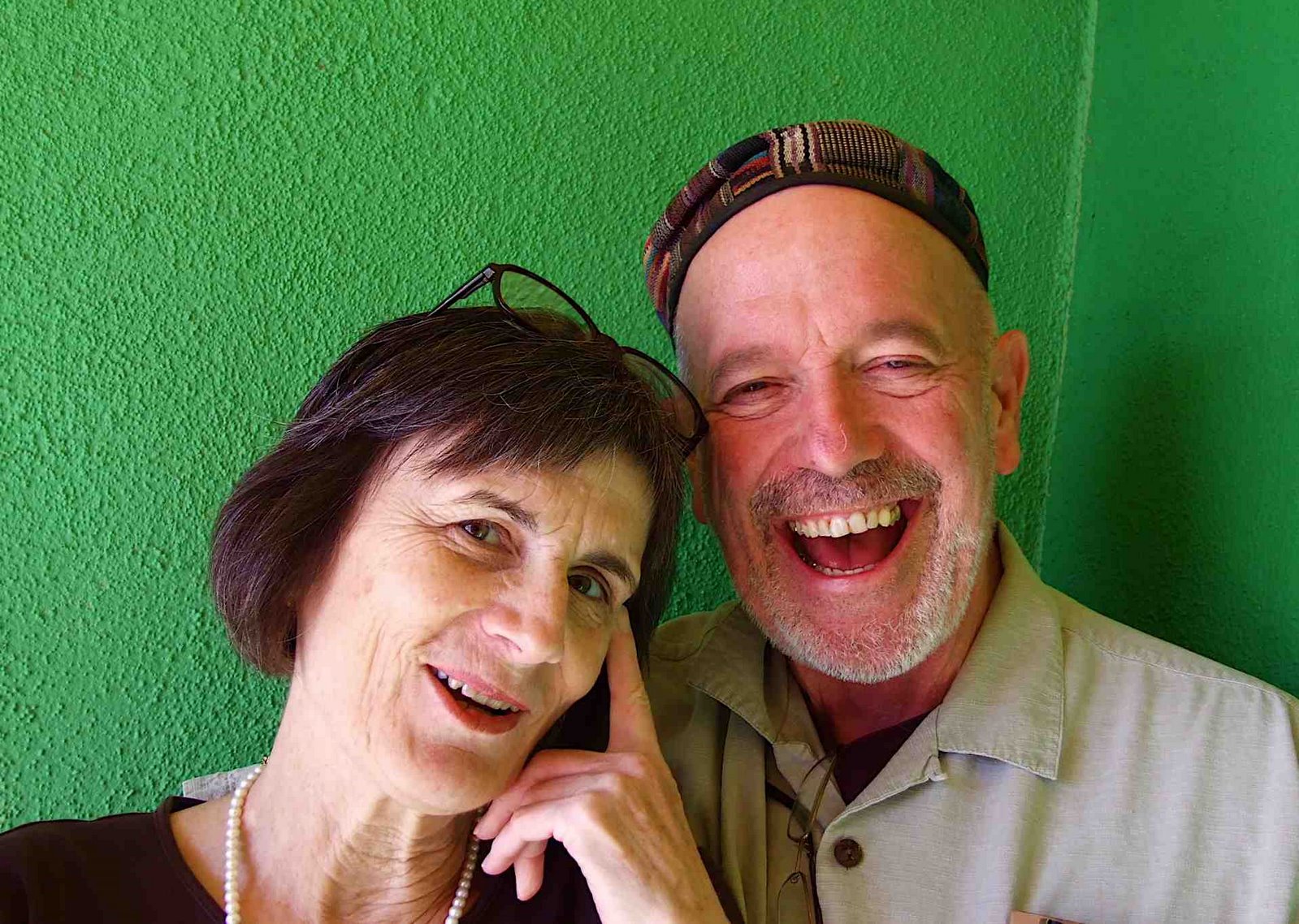 Bobby Byrd of El Paso was many things to many people. But first and foremost, Bobby was a poet. That’s what his friends and loved ones remember him as in the wake of his death on July 11, 2022, after a battle with cancer. He was 80 years old.

“Bobby is a poet,” his wife, Lee Merrill Byrd, corrects herself when she reiterates this to me over the phone.

Yes, there was Cinco Puntos Press, the publishing company he and Lee founded that helped put Chicano literature on the map. Yes, there were all the accolades—the American Book Award for Excellence in Publishing, the prestigious PEN/Faulkner win by Benjamin Alire Sáenz for his short story collection Everything Begins and Ends at the Kentucky Club, several children’s books that were recognized as American Library Association and Texas Institute of Letters notables. There was the activism and the basketball. And there were the travels to publishing and library conferences that Lee says always reminded them of why their work was important, especially when their books would catch the eye of the Latino staff whom the publishing industry seemed to dub “nonreaders.” But before all that, there was just Bobby, and Bobby was a poet.

Bobby’s ear for poetry and his love of serendipity informed Bobby and Lee’s literary lives.

Bobby and Lee started Cinco Puntos Press with a hope and prayer after a tragic playhouse fire in El Paso sent them to California to seek reconstructive surgery for their boys, who had been badly burned. In 1982, they stayed with friends Richard Grossinger and Lindy Hough, who had started their own press, North Atlantic Books. The husband-and-wife duo had previously published a book of Bobby’s, Here: Poems by Bobby Byrd. Bobby and Lee found inspiration in their friends’ success with North Atlantic, which made them roughly $25,000 per year, about $76,000 in today’s money.

“We thought, well, this is just what we want to do,” Lee says. “We just wanted to make a living.” And, she adds, not work at their day jobs for another boss for the rest of their lives.

They came home to El Paso and started Cinco Puntos Press in 1985. By 2001, the Byrds expanded the press from an operation out of their home to a colorful and iconic bookstore on Texas Avenue. They headquartered their operation there until 2021, when New York publisher Lee & Low Books offered to purchase Cinco Puntos Press, keep the titles in print, and allow the Byrds to retire. 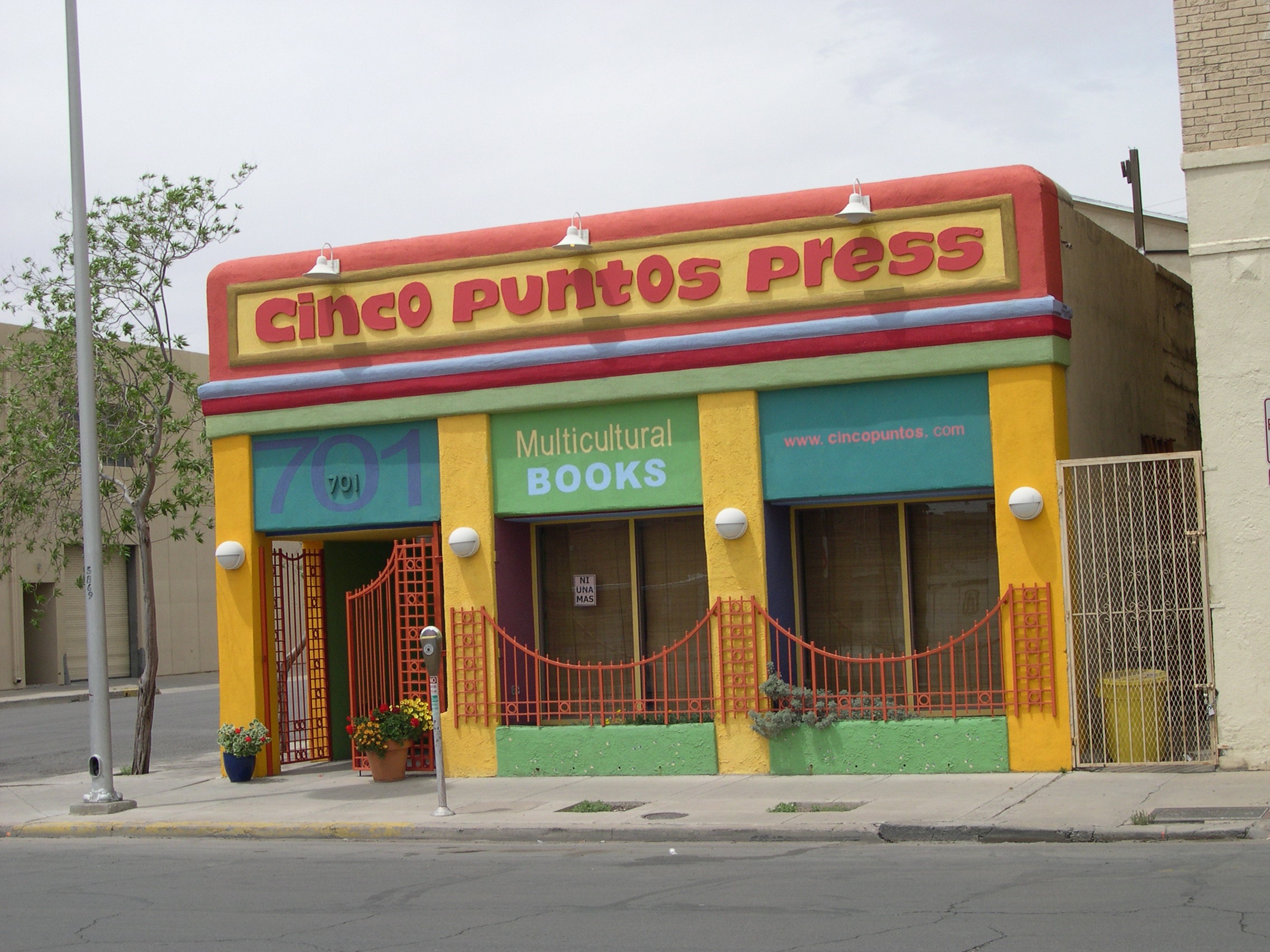 Cinco Puntos became a force in indie publishing, but its origins were humble. There was no money and no plan other than to publish books Bobby and Lee felt were important. A friend, Vicki Trego Hill, knew how to design book covers. Another friend, Dagoberto Gilb, had been seeking a publisher for his short story collection Winners on the Pass Line. The Byrds asked to be that publisher, and Gilb said yes.

“I was a young writer. He was a young publisher,” Gilb says. “We were both learning new ropes.”

Gilb’s collection went on to be reviewed on NPR, causing the book to quickly sell out and require a second printing.

“It was like riding a runaway truck with the wheels falling off,” says Santa Fe storyteller Joe Hayes, author of one of Cinco Puntos’ greatest hits, La Llorona: The Weeping Woman, published in 1987. “We were all living hand to mouth—or maybe six inches to the mouth. None of us knew what we were doing.” Bobby frequently referred to Cinco Puntos as “the house that La Llorona built.”

“Their business decisions were always driven by the desire to publish good books, books they felt were important, books by writers they respected,” Hayes says.

Although Cinco Puntos quickly became a leading publisher of Latino and borderland literature, Lee insists the focus was purely coincidental, buoyed by that sense of serendipity Bobby loved so much.

“I really want to dispel the notion that we knew what we were doing,” Lee says. “We had no intentions whatsoever.”

Bobby and Lee just loved good books, wanted to publish good books, and knew a good book when they saw one. And, thanks to the location of Cinco Puntos 3 miles from the Texas-Mexico border and the early successes of the works by Hayes and Gilb, many of the good books submitted to the press happened to be by Latino writers.

“New York wasn’t coming for Chicanos at that point,” Lee says. But Cinco Puntos was there to fill the gap.

“Bobby’s instincts were just so spot on,” says David Bowles, a writer from the Rio Grande Valley who published his award-winning book of kid’s poems They Call Me Güero with Cinco Puntos in 2018. “If it hadn’t been for Bobby, that book wouldn’t exist,” Bowles says.

“The work that Cinco Puntos did with such a small group of people was quite commendable,” says Southern California writer Isabel Quintero, whose award-winning young adult novel, Gabi, A Girl in Pieces, was published with Cinco Puntos in 2014. “They were very homey, very down-to-earth folks.”

The friendly vibe was something Bobby worked hard to keep at the forefront of all his relationships, familial and professional.

“We were friends beyond that press,” Gilb says. One of Gilb’s last visits with Bobby was to Las Cruces, New Mexico, to stay with another family friend. “All the way up, Bobby and I talked and laughed about our ridiculous stories, shared our family’s joy and worry. There was basketball talk, poetry business, New York literature, beer, and burritos. Makes me want to cry remembering it.”

I experienced Bobby’s kindness firsthand when I met the Byrds at the 2014 Texas Library Conference. At the time, I was a children’s librarian and a fledgling writer who had just started to think that maybe I could write a book. I attended a panel Lee, also a writer, was on that discussed diversity in children’s literature and the power of small presses. I made a point to visit the Cinco Puntos table and buy a copy of Hayes’ La Llorona, a formative book from my childhood and an influence on my surrealist fiction-writing style. Overcome with emotion, I asked the Byrds to autograph it, which they did. They even threw in a bumper sticker for my car (“Honk if you’ve seen La Llorona”) on the house. Years later when I totaled that car and lost my sticker in the crash, Bobby sent me a new one to make sure I wouldn’t go without. Because of course he did.

“Bobby just wanted to lessen the suffering in the world,” Bowles says. “That’s all he was concerned with.”

Quite possibly one of the most important endeavors in Bobby’s life perfectly combined his pursuit of social justice and his love of poetry. It stemmed from his friendship with Rus Bradburd, who co-created Basketball in the Barrio, where each kid from the Segundo Barrio in El Paso would pay $1 for a basketball, a T-shirt, ice cream, a jump-rope, a harmonica, and a bilingual children’s book from Cinco Puntos. 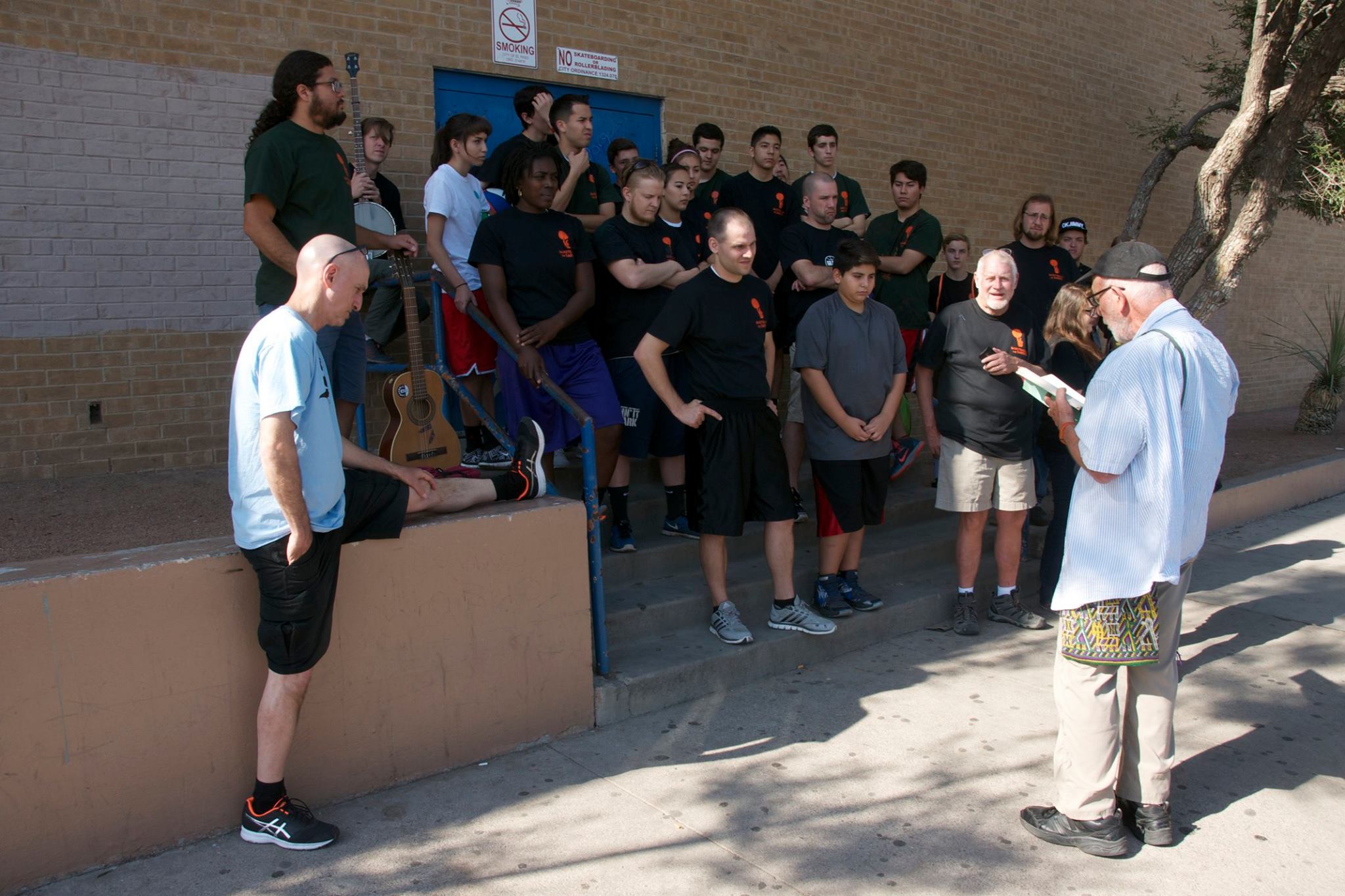 Bobby Byrd reads his poem Basketball Is a Holy Way To Grow Old to the Basketball in the Barrio group. Photo by Michael Gaylord James.

Instead of the usual pep talk from the coach, Bradburd opted for Bobby to read his poem Basketball Is a Holy Way To Grow Old to the group. “I thought Bobby reading his own poem would resonate,” says Bradburd, who himself loved Bobby’s accessible poetic style. Thus began the long tradition the group looked forward to each year.

“This year, when Bobby became too sick to read to the group, I thought I’d have to read it myself,” Bradburd says. But the job proved too emotional. He simply couldn’t do it without Bobby. Instead, all the coaches agreed to take the kids to Bobby’s home and read the poem in unison through his bedroom window as he listened in bed.

“We called out, ‘We love you, Bobby!’ when we were finished, and he yelled back his thanks,” Bradburd says. Twenty-eight hours later, Bobby died from an aggressive form of cancer, which Lee says took him very quickly.

“I still haven’t reconciled myself with the fact that he’s not here,” Hayes says. “Bobby was a one-of-a-kind, and you just have to be thankful that you had the time with him. He was a community within one man.”