Celebrating Its 130th Birthday, the Daughters of the Republic of Texas Looks Ahead to the Future

Known for preserving history, the group has new goals and properties to provide more access to it 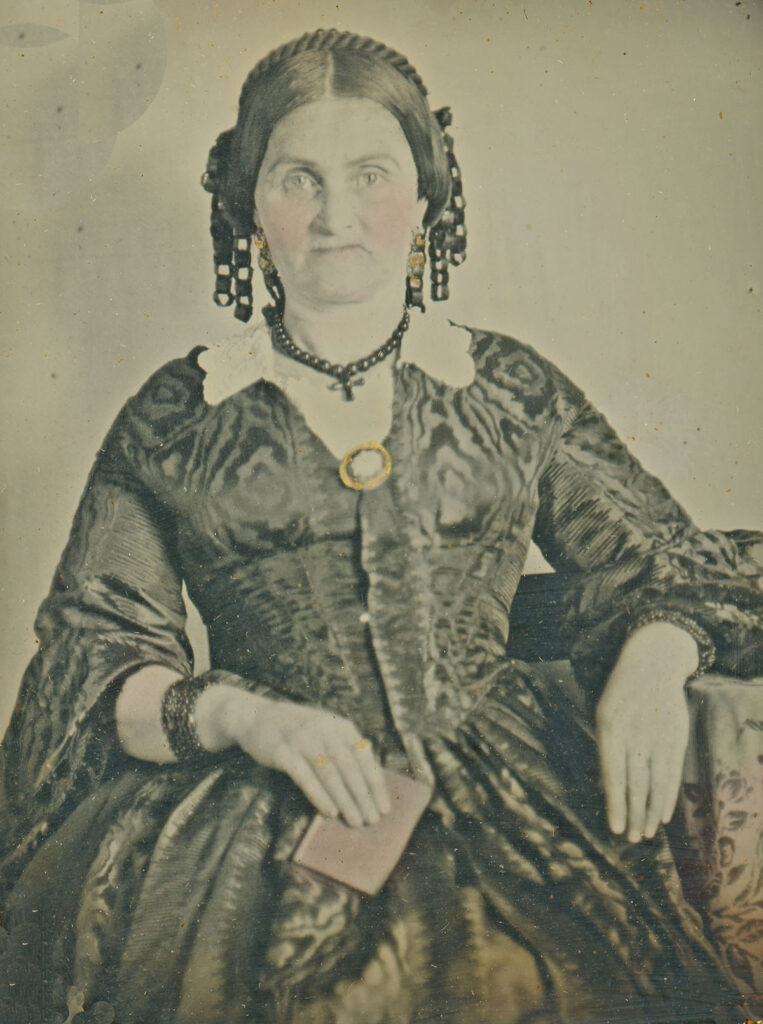 Portrait of Finetta Palmer Baker of San Augustine. Photo courtesy of the Ezekiel Cullen Chapter of the Daughters of the Republic of Texas.

The Daughters of the Republic of Texas keep Texas history lively and alive. During walking history tours of San Augustine, for instance, fourth-graders meet Finetta Palmer Baker, portrayed in period costume by her great-great-granddaughter Lois Gee Lacy, the president of the Ezekiel Cullen Chapter of the organization. While describing life in San Augustine in 1836, “Finetta” excitedly tells the children about the Runaway Scrape, when colonists fled eastward as the Mexican army advanced after the fall of the Alamo.

“When the news came that Santa Anna’s army was headed our way, Moseley Baker ordered everything burned so that the Mexicans would not get the town’s food and supplies,” she says. “Our store, everything we had, about $7,000 worth, went up in smoke! We were told that we would be reimbursed, but we are still waiting on the check. I hurriedly gathered my dishes and what little I could carry and headed east. We didn’t know whether to be more afraid of the Mexicans or the Indians. There were so many people on the road! And it was so muddy! As the journey got harder, people left their possessions on the side of the road. We were running for our lives!”

Comprised of women like Lacy throughout the state who have an ancestor who “rendered loyal service to Texas” before it joined the United States in 1846, the Daughters of the Republic of Texas celebrates its 130th birthday on Nov. 6. With approximately 7,160 members, the organization works to preserve the memory of Texas pioneers, especially those men and women who contributed to Texas’ establishment as an independent nation.

Along with Clara Driscoll and Adina de Zavala, the Daughters helped save the Alamo in 1904, and the organization managed the historic site until 2015, when the General Land Office took over. Along with its many other programs—book awards, student essay and art contests, Texas History Teacher Awards, the DRT Library, and Texas Honor Days—the members preserve the memory of pioneers by offering tours of historic homes.

Members like Joyce Gray of Irion County also get to participate in special events. “As a proud Texan, my favorite moment was the day I represented the Daughters of the Republic of Texas at a sesquicentennial celebration and used Sam Houston’s sword to cut a cake for Gov. George Bush and Lt. Gov. Bob Bullock,” she says. The occasion was the anniversary of Texas’ entry into the Union on Feb. 19, 1846. Along with a reenactment, the event included people dressed in period soldier costumes and a man dressed as Anson Jones, the last president of the Republic of Texas. “I could almost feel the moment come alive when the Texas soldiers lowered the Texas flag and the American soldiers raised the United States flag over Texas on the front steps of the Capitol in Austin,” she says.

In the summer of 1891, cousins Betty Ballinger and Hally Bryan conceived of the organization in Ballinger’s father’s Galveston law library. Its official founding took place at a meeting with 17 women at the Houston home of Mrs. Andrew Briscoe on Nov. 6, 1891. The Ballinger Galveston home, now known as The Cradle, is open for tours by appointment (713-582-1914). Restored in the 1990s, the home features 19th century furnishings. (The Briscoe home no longer exists but a historical marker stands near the location on Crawford Street.)

Three other historic properties managed by different Daughters chapters are currently open for tours, including the J.B. Wells House in Gonzales and the Ezekiel Cullen House in San Augustine. The 15-room Gonzales home (also known as the Matthews-Wells House) was given to the Daughters by J.B. Wells Jr. in honor of his mother Josephine Wells, whose own mother lived in Texas during the days of the Republic and was a founding member of the Gonzales Chapter. Furnishings include a dresser brought by oxcart from Tennessee and a sugar bowl that was buried during the Runaway Scrape. 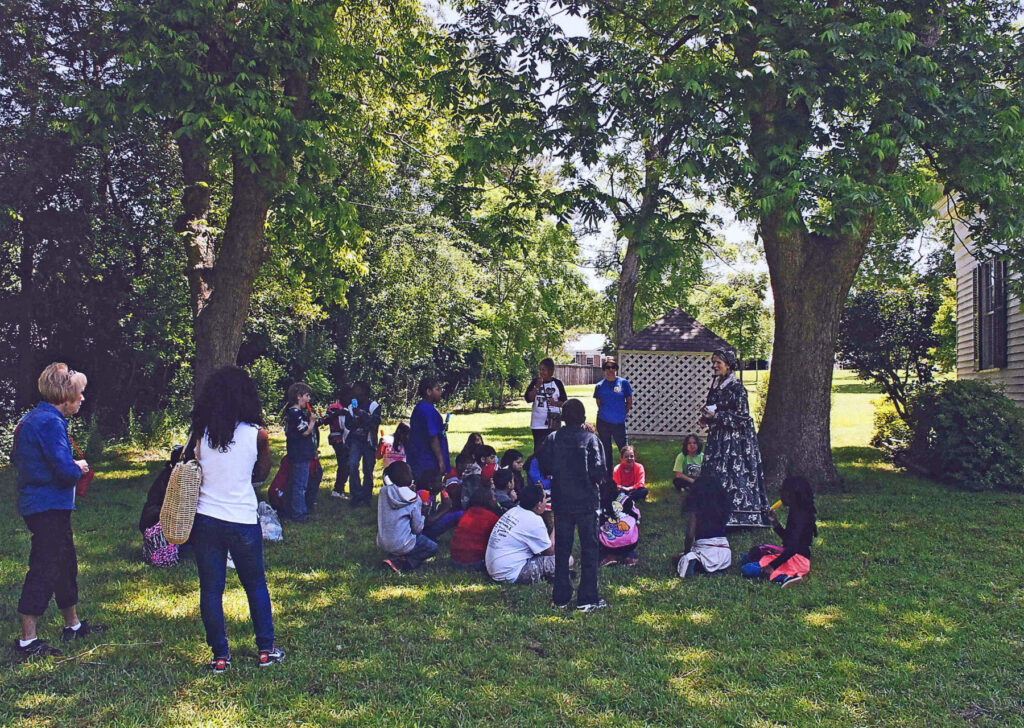 Finetta Palmer Baker’s great-great-granddaughter Lois Gee Lacy speaking to schoolchildren about the story of San Augustine and the Runaway Scrape. Photo courtesy of Ezekiel Cullen Chapter of the Daughters of the Republic of Texas.

Owned by the Ezekiel Cullen Chapter, the San Augustine home was built in 1839 in the Greek Revival style. The home’s former owner and namesake was a veteran of the 1835 Siege of Bexar, an associate justice of the Supreme Court of the Republic of Texas, and a member of the Republic of Texas’ Third Congress. In addition to antique furnishings, the home exhibits paintings by the noted artist and San Augustine native S. Seymour Thomas.

The third property, built in Houston in 1936 by the San Jacinto Chapter, is the Pioneer Memorial Log House. Tours of its Texas Pioneer Museum are available on “regularly scheduled afternoons.” In addition to a spinning wheel and other pioneer era furnishings, the museum features two paintings of galloping Texian scouts that are believed to have been painted around 1840 by Harriet L. Rather.

The organization is also currently building a Republic of Texas History Center in Austin. Set to open next year, the facility will include a Family Research Center for genealogical research, multipurpose meeting rooms, and the group’s headquarters. Additionally, as President General Kim Stracener Zapalac stated in an email, the new center “will house our Republic of Texas Museum, which is currently in the planning stages of being reimagined to fully tell the story of the Republic of Texas era including a brief history of pre-Republic and post-Republic. The focus is on what life was like during the Republic era for the citizens, namely the diversity of women and children who have not been represented before.”

In the interim, some of the Daughters’ museum artifacts are on view at the Bob Bullock Texas State History Museum in Austin, including a pair of single shot, .44 caliber percussion pistols, manufactured in France, that were confiscated from Mexican General Antonio Lopez de Santa Anna after the battle at San Jacinto.

The Daughters of the Republic of Texas Library in San Antonio is also in a state of transition. Located on the Alamo grounds from 1950 to 2015, the massive research collection has been housed at the Bexar County Archives Building since 2017 and administered by Texas A&M University-San Antonio’s Special Collections. Before it closed while the Daughters restructures its agreement with Bexar County, the library’s holdings assisted such projects as the redevelopment of the Aurora Apartment Hotel, a $2 million residential hotel building opened in 1930 that was recently nominated to be listed in the National Register of Historic Places; and a presentation on San Antonio’s Fiesta Flambeau Parade. With items like letters from Stephen F. Austin and a Civil War soldier’s diary, the collection is often used by researchers and students. “And the San Antonio Missions National Historical Park sent an intern to research burials at San Jose,” adds Leslie Sitz Stapleton, head of TAMUSA Archives and Special Collections. “He used transcripts of burial records that we have, plus he studied the many photos we have of Mission San Jose.”

After 130 years, the Daughters of the Republic of Texas continues to attract members. If curious about joining, know this: membership in the Daughters of the Republic of Texas is open to any girl or woman over the age of 16 who, as noted on the organization’s website, “is personally acceptable to The DRT and is a lineal descendant of a man or woman who rendered loyal service for Texas” prior to Texas joining the United States. Visit the website for more details.