Corpus Christi and Me 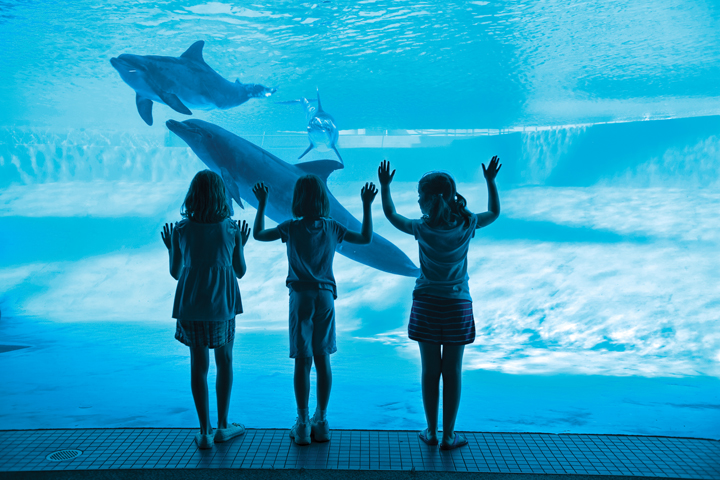 You’ll need fins and flippers to get any closer to the sea creatures who live (and perform) at Corpus Christi’s Texas State Aquarium. (Photo by Joel Salcido)

Three beguiling bottlenose dolphins —D.J., Shadow and Kai—reign as the undisputed stars of the Texas State Aquarium in Corpus Christi. Their daily performances in the large outdoor tank captivate the diverse international crowd seated in the stadium surrounding the water.  Even though members of the crowd speak several languages, the collective “oohs” and “ahhs” need no translation. The dolphins follow their trainers’ instructions and leap high out  of the water, turn backflips, perform an astoundingly speedy backstroke with their white bellies up, “applaud” with their flippers, and “sing,” demonstrating  the amazing range of noises they can create. Watching these antics, I can’t help breaking into a wide smile; these dolphins radiate a sense of joy that’s contagious.

Inside the sprawling marine center, my childlike excitement and wonder continue as I peer into the 125,000-gallon Islands of Steel tank, which recreates the habitat under an offshore drilling platform. Giant stingrays slowly flap their winglike fins and glide through the water. In a huge floor-to-ceiling aquarium, a nurse shark (named Hans) darts between steel pylons and an evasive moray eel peeks out from a pile of rocks. Nearby, in an exhibit that’s dark except for a few spotlights, luminescent jellyfish trail long tentacles and appear to float in sync like they’re dancing an underwater ballet.

I’m in Corpus Christi playing tourist in my hometown. Now that I live in Austin, I view the city with a fresh perspective when I return for a visit. It’s particularly gratifying to see all the attractions that weren’t there when I was growing up—the aquarium, public art along the bayfront, art museums, new sports venues, the South Texas Botanical Gardens & Nature Center, and the USS Lexington Museum on the Bay.

Now Corpus Christi is a destination in its own right, regardless of whether you visit Padre Island, the world-famous barrier island just across the Laguna Madre. On my visit I rediscover favorite haunts, such as the historic seawall and the T-heads and L-head—man-made permanent piers now housing restaurants, bait shops, a yacht club, and marina slips. I still love to stop by early in the morning and buy fresh shrimp right off the boats.

As a visitor, I’m also learning things I never knew while growing up here. I had no idea that the sculptor and artist John Gutzon Borglum, best known for
his monumental sculptures at Mount Rushmore in South Dakota, lived in Corpus Christi more than 80 years ago and, in 1928, was commissioned to design a seawall. His plan included a 32-foot-tall bronze statue of Jesus in the bay to acknowledge the city’s name, which translates from Latin as “Body of Christ.” That proved controversial, however, and the idea was rejected. It wasn’t until 10 years later that voters approved bond money for the seawall that now runs along the bay edge of downtown.

I’m enjoying discovering what’s new about Corpus Christi. Many attractions cluster conveniently on Corpus Christi Beach—locals still call it North Beach—on the north side of Harbor Bridge. When I was growing up, North Beach was known for its dilapidated beach houses and faded motels, long after it lost the luster of its earlier identity as the Coney Island of Texas, with a Ferris wheel, rides, and a boardwalk.

Now North Beach is reinvented as a tourist haven, with high-rise hotels and condos, restaurants, souvenir shops, and attractions such as the Texas State
Aquarium and the Lex. A recent civic landscaping project brought a walking trail called The Beach Walk and palm trees to the beachfront. It’s a pleasure to stroll along the now-pristine beach, which offers one of the best views of the downtown skyline, and watch great cargo and tanker ships steaming in from the Gulf of Mexico to the port. All ships pass under Harbor Bridge, which once served as the only passage to North Beach. Now visitors can hop aboard the RTA Harbor Ferry in downtown Corpus for the short trip across the channel.

When I reflect on my early years, I remember that Corpus Christi offered few venues for viewing art. Now several art museums populate the city, and public sculpture appears in open spaces all over town. On the downtown side of Harbor Bridge, I stop at the modernist white Art Museum of South Texas, designed by renowned architect Philip Johnson (with a 2006 addition designed by Mexican architect Ricardo Leggoreta). The permanent collection holds some 1,300 works: paintings, sculpture, prints, drawings, mixed media, ceramics, and textiles. Artists represented include Donald Judd, Luis Jimenez, and Robert Summers. The expansive windows overlooking the bay seem to frame the ever-changing play of light on the water, a shimmering painting in itself.

One of the city’s most visible public sculpture concepts, Borglum’s early idea for a statue of Christ, finally became a reality in 1995 when Swedish sculptor and local resident Kent Ullberg’s monumental bronze It is I was unveiled in front of the First Methodist Church on Shoreline Drive. I learned that my beloved high school English teacher, Dorothy McCoy, had led the drive to get the statue erected and was the major donor. “It’s about as public [as] a piece of art can be on private land,” Ullberg says. Indeed, the piece has become a tourist attraction with visitors stopping daily to photograph it.

Following the aquarium on my list of favorite places in Corpus Christi is the South Texas Botanical Gardens & Nature Center. But I must confess I’m biased—my father, Samuel Jones, is the curator of the orchid house, which contains the Southwest’s largest collection of orchids, numbering near 2,000.
Located on the city’s far south side, the center is perched on the edge of Oso Creek, a wetlands area that attracts birds and wildlife such as javelina and
bobcats. When I visit in early spring, the lovely Phalaeonopsis, also called moth orchids, enthrall me with blossoms of creamy white, or speckled with purple, or striped with pink, all dancing in the fanned air on long spikes. In the summer, warm-weather orchids such as Vandas put on a spectacular show. The center also has a lovely rose garden and pavilion, a wetlands boardwalk, and a palapa grande (a thatched-roof shelter typical of the tropics) for birdwatching along Oso Creek, as well as nature trails along the Oso.

I can’t visit Corpus without getting my fill of Gulf seafood. My favorite stop is the Water Street Oyster Bar in its cavernous, redbrick building downtown. The restaurant anchors a popular enclave of shops and eateries, so it is almost always bustling with an exuberant crowd, and the seafood always is fresh. I find the fried shrimp outstanding because it is not layered with too much batter, but I can’t resist the grilled amberjack, a fish with sweet, firm flesh.

No one should leave South Texas without sampling a hearty Mexican-style breakfast at Taqueria Jalisco, a local chain with an excellent Tex-Mex menu
and the best flour tortillas I’ve ever eaten: Tender and lightly griddled, they’re just about perfect. I always order the migas—fried strips of corn tortillas
scrambled with eggs, onions, tomatoes, and peppers.

On my way out of the city, I drive along the bayfront one more time. The wind has kicked up, and white sailboats dot the bay while wind-surfers streak across the water closer to shore. I drive north over the Harbor Bridge and take a glance back at my former hometown hugging the curve of the shoreline and sparkling in the sun. The view always stays with me—and always keeps me coming back.