Cottages by the Sea 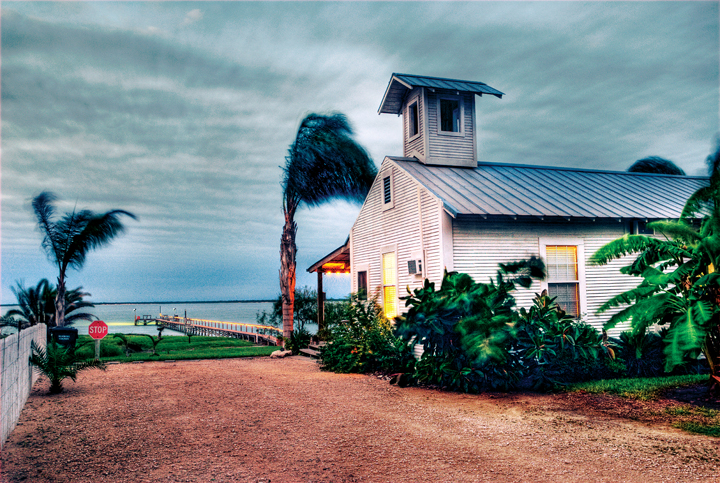 Once a church and school in Falfurrias, Little Bethel now welcomes overnighters at Loyola Beach. (Photo by Al Argueta)

Our mental images of “a cottage by the sea” may vary, but the idea of a bungalow with gumbo simmering in the kitchen and a little sand on the floor, tracked in after a day at the beach, appeals to many of us. Sometimes, instead of a hotel room, we have in mind something homier, with more space for flinging off our flip-flops, stashing sand pails and surfboards, and lounging on a spacious porch to enjoy the coastal breeze.

Somewhere on the Gulf of Mexico or one of its bays sits the perfect cottage for you. We’ve combed the coast some 420 highway miles and zeroed in on a few special places to lure you seaward. All capture the spirit of seaside living, each with a personality all its own.

You can’t get much closer to the Gulf of Mexico than this cheery, yellow A-frame with turquoise trim, perched on stilts at the water’s edge in Surfside Beach, about 40 minutes southwest of Galveston.

Inside Blue Mermaid, a living-dining room feels warm and welcoming, its sloping walls enclosing an overstuffed couch and love seat, a round rattan table with four chairs, and a fully equipped little corner kitchen.

A short hall leads to a tidy bathroom with a shower and a bedroom with a comfortable queen bed and a shelf filled with paperbacks. A narrow staircase climbs to a loft with two twin beds, another double, and a balcony. Internet access? No, but you can watch satellite TV or, better, sit on the deck and keep an eye on the surfers (hence the name Surfside).

Scamper down to the beach for a walk, or try to catch a trout. You can cook your catch at the cottage or go out for seafood about half a mile away at Red Snapper Inn. (Try the buttery, sautéed soft-shell crabs meunière.)

Nearby tide pools offer good crabbing, or you might rent a surfboard at Bingo’s and try your luck on the waves. Whatever you do, take it easy: You’re on island time.

Make yourself at home in a sand sculptor’s cottage, one of the most unusual places to stay on South Padre Island.

Professional sand sculptor Lucinda Wierenga—better known as Sandy Feet—lives on the ground floor of this gray, two-story beach house and rents out the top floor and loft apartment. You’ll know you’re there when you see the sandcastle sculpture out front and the peace-sign weather vane on the roof.

Decorated in what Wierenga calls “beach-shack chic,” the pine-floored upstairs, which has its own entrance, features a gourmet kitchen with a curved, poured-concrete countertop housing two copper sinks—a big one for most tasks and a smaller, round one perfect for icing down boiled shrimp—along with a bar fashioned from an eight-foot slab of mesquite.

Pop a top on the pool table, and—voila!—you can dine on it. Tickle the ivories on the upright grand piano, watch cable TV, or use free WiFi to connect to the Internet.

In the main-floor bathroom, you’ll find a bidet, along with a Mexican painted ceramic sink.

Surprisingly roomy, the house sleeps 10, with a queen bed in one bedroom, a double and two singles in the loft (which also has its own large bathroom), and two pull-out couches. A futon on the back porch adds fair-weather sleeping al fresco.

A chandelier dangles over a picnic table in the backyard near an ever-changing sandcastle under the second-floor deck. Occasionally, Wierenga hosts live music events out here.

The cottage sits a half block from the beach, and a short walk from the island’s most popular seafood restaurant, Blackbeard’s. Try the Deep sandwich, piled high with fried flounder fillets.

A bonus: Anyone who stays in The SandBox for a full week earns a sand-sculpting lesson.

North of Rockport, near the Fulton Beach area on Aransas Bay, pastel Cape Cod-style cottages with shutters line a winding road through a grove of live oaks.

Pelican Bay takes the fishing-village definition of resort: no golf course or spa; rather, a lodge, a cluster of cottages, mini-suites (alongside a pool with hot tub), a clubhouse, and a fishing pier. If you prefer your own cottage but appreciate amenities such as daily maid service along with coffee and breakfast bars, this place is for you.

Even though the interiors, with tile flooring except in the carpeted bedrooms, might seem familiar to those who frequent beach condos, each distinguishes itself with cottagey touches such as knotty-pine ceilings, wainscoting, and furnishings; window boxes of red silk poppies; and two rocking chairs on the porch near a barbecue grill.

Each lodging sleeps four—in the bedroom’s new queen-sized bed and the queen sofa sleeper in the living-dining area; both rooms have TVs. The kitchen’s full-sized appliances include a dishwasher and a microwave.

Wander down to the clubhouse to use the free wireless Internet connection, play cards or billiards, or take advantage of the coin-operated washer and dryer.

If you’re not up for cooking dinner, drive about a mile to Fulton Beach Road, where you’ll find several good restaurants, including Moondog, overlooking Fulton Harbor, where the cooks know how to fry shrimp and snapper without losing the delicate textures and flavors.

The water awaits nearby, and just a short walk leads you to the resort’s lighted fishing pier. The resort can arrange tee times at Rockport Country Club,
and Pelican Bay makes a good base for visiting Aransas National Wildlife Refuge, which hosts the world’s largest wild flock of endangered whooping cranes from around mid-October to March.

Stretch your definition of “cottage” when you drive through the gates of Crystal Beach’s “The Biscayne” neighborhood and see Robin’s Nest. This grand haven can house a big family. Maybe two.

With four bedrooms and four full bathrooms, Robin’s Nest—on the Bolivar Peninsula a block from the Gulf of Mexico, but within view of it—sits on stilts so sturdy they held up even when Hurricane Ike pushed 15 feet of water at them in 2008.

No Internet connection, but why turn on a computer when you can watch blue herons wading in a pond just outside the master suite’s window?

If you’re in the mood to stalk trout, red fish, and flounder, hire a guide at the marina near Stingaree restaurant, a local favorite because of dishes like red snapper almondine.

People often choose Crystal Beach for its bucolic setting, but if you get antsy, take the free, 20-minute ferry from Port Bolivar (15 minutes away) to entertainment-packed Galveston.

When you return to your cottage, take a walk on broad Crystal Beach, then enjoy a meal on your porch and watch ships, silhouetted against the pink early-evening sky, glide into Galveston Bay.

The white steeple tells you you’ve found Little Bethel, a 1950s African American Methodist church and school that Keith and Bobette Naylor moved from Falfurrias to the edge of Baffin Bay at Loyola Beach, about an hour south of Corpus Christi, and turned into a rental cottage.

Clues to its past—a church pew, a pulpit, and a chalkboard—remain amid this hardwood-floored cottage’s ’50s decor: a turquoise arm chair, a yellow Formica kitchen table, a cotton skirt covering the area under the sink. You won’t find a microwave or Internet; either would ruin the mood, anyway.

The cottage sleeps six—on a queen bed in the bedroom, a couch, and another double and a single behind a screen decorated with ’50s 45-RPM records (Johnny Mathis’ “Chances Are,” for one). Play darts, watch TV, or choose one of dozens of furnished videos.

The kitchen redefines stocked, offering coffee, condiments, milk, juice, crackers, and, best of all, fresh-baked goods from Bobette Naylor’s oven. My favorite: her spongy poppyseed cake, baked in a Bundt form and presented on a sturdy paper tray, so you can take it home with you if you’d like.

A 300-foot lighted fishing pier pokes out into the bay, and a butane fish-cooker near the driveway can fry your catch. Not up for cooking? The King’s Inn restaurant, half a mile up the road, serves some of the best fried shrimp on the coast.

At the end of the day, sit out back on Little Bethel’s porch, savor Bobette’s cake, and watch the stars shine over the water. If you get chilly, relax inside and read a mid-century cookbook for farmers’ wives. Note the sign over the back door: “Thou shalt not whine.” I should think not.