Whether you're coming or going, Galveston is a shipshape port for extending your cruise. 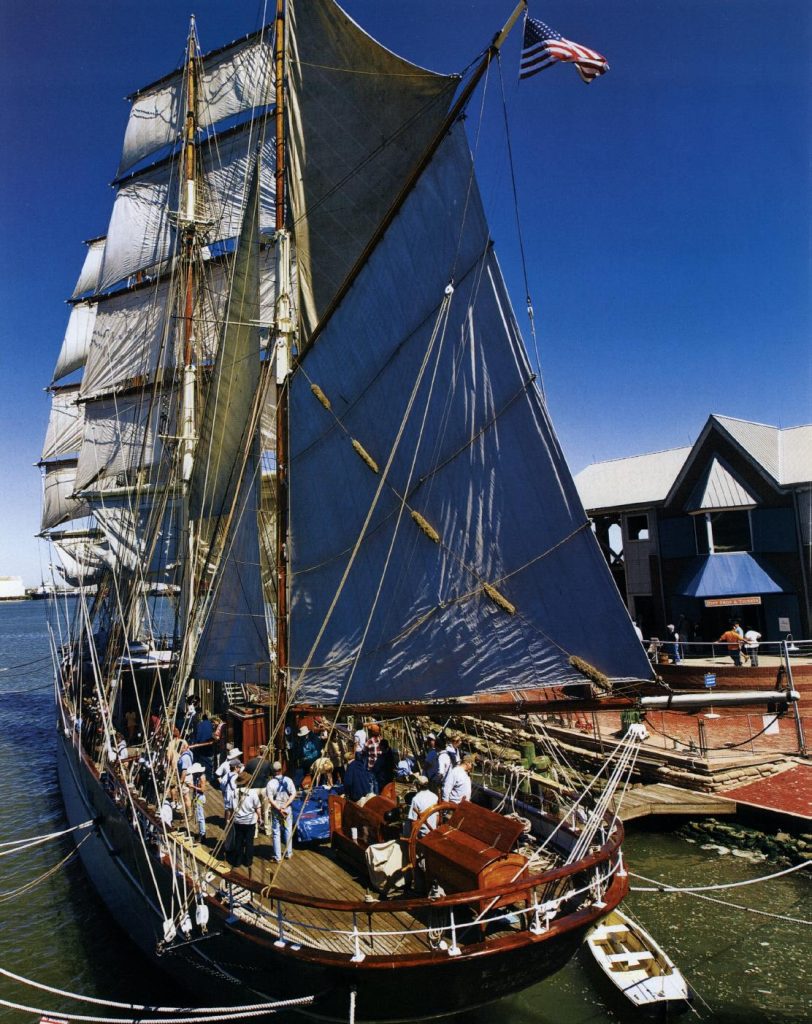 Set sail! The historic Elissa attracts a crowd at the Texas Seaport Museum.

Strolling along The Strand, the main thoroughfare of Galveston’s historic downtown, I get the overwhelming impression that I’ve somehow traveled back to the 1800s. For five blocks, extending from 20th Street to 25th Street, Victorian-era storefronts with decorative brickwork and high balconies line the street, and horse-drawn carriages convey passengers to shops, museums, and restaurants. At night, gas street lamps illuminate the sidewalks, and the illusion
is complete, save for one thing: An immense (nearly 1,000-foot-long) cruise ship docked at the adjacent harbor brings the scene undeniably into the  present.

Ever since the Galveston Cruise Ship Terminal was dedicated in 1990, millions of cruise-goers have flocked to the island as a jumping-off point for high-seas adventures and exotic ports of call. The harbor has expanded and improved over the last 20 years, and currently ranks fifth in the nation for number of embarkations, averaging about 600,000 a year.

Today, two major cruise lines call the harbor home base. Royal Caribbean’s Voyager of the Seas departs weekly from late November through mid-April, and Carnival Cruise Lines’ Ecstasy and Conquest embark year round for such tropical hotspots as Cozumel, Jamaica, and the Cayman Islands.

Yet as enticing as these far-flung ports of call may be, many cruise passengers find that Galveston is a worthy destination in its own right. Located on the bay side of the island, the cruise terminal abuts downtown Galveston, known as The Strand National Historic Landmark District, which includes The Strand and the adjoining 36 square blocks. Here, more than a century ago, cotton brokers weighed and traded bales of cotton prior to export, shipping magnates haggled with their bankers, and vacationers promenaded The Strand while taking in the bracing sea air. Even today, remnants of the past remain, and many of the downtown structures speak to a time when Galveston, not Houston, served as Texas’ most significant port—at least until the
hurricane of 1900 took its toll.

Even before the Texas Revolution (1835-36), Stephen F. Austin, who brought the first colonists to settle in the territory, praised Galveston as “the best natural harbor the colony of Texas has to offer.” According to Steve Cernak, director of the port, “Galveston’s roots are maritime. It was founded as a port in 1825, and the city grew up around it. Galveston played a pivotal role in the growing economy and population of Texas. It was the gateway through which many immigrants arrived and goods left for market.” The city was incorporated in 1839, and by 1840 it was the largest in Texas. Though Galveston no longer boasts the state’s largest population, it continues to draw vacationers in droves, and The Strand and its surrounding streets still bustle. The historic buildings that once served as mercantile warehouses and banks now house wine bars, bistros, curio shops, and clothing stores.

To learn more about the port’s history, I venture two blocks north on 22nd Street to the Texas Seaport Museum, which occupies a two-story contemporary
brick building alongside the wharf at Pier 22. The museum pays tribute to Galveston’s identity as a major hub for shipping and immigration with two floors of displays, where visitors can weigh hay bales, examine historic photographs, and search a computer database for immigration records.

The museum’s main gallery houses a functioning sail loft and sail-making exhibit, which is strewn with canvas and equipped with sewing machines for the production and repair of sails for the 1877 tall ship Elissa. Docked opposite the museum’s entrance, this three-masted iron barque visited Galveston twice in the 1880s to be loaded with cotton bound for its home port of Liverpool, England. The Elissa continues to sail Galveston Bay and the Gulf of Mexico
today. I take a self-guided tour of the stately ship, across decks crisscrossed with rigging, through the engine room’s warren of machinery, and past the elegant officers’ quarters. Glancing into the narrow berths of the fo’c’sle at the bow, I gain a new appreciation for the relative luxury of a modern-day cruise-ship cabin.

Another vessel operated by the Seaport Museum, the double-decker Seagull II offers hour-long tours of the harbor four times a day. I take a seat at the prow, a prime spot for viewing the harbor’s natural and industrial wonders. As we motor along the ship channel, the Seagull II bounces gently in the wake of passing barges and cargo ships. Gulls circle overhead, and low-flying pelicans skim the water with the tips of their broad wings. My fellow passengers and I gasp in delight when a pod of dolphins surfaces behind a nearby shrimp trawler. Meanwhile, our captain explains the harbor’s various industrial features, pointing out the dockside cranes and grain elevators, as well as the floating dry docks and decommissioned offshore oil-drilling platforms. One of these rigs, connected to a pier off 20th Street, now serves as the Ocean Star Offshore Drilling Rig and Museum, with exhibits devoted to the engineering and ingenuity required to pump crude from deep beneath the Gulf of Mexico.

Witnessing the thriving port, I find it difficult to imagine the destruction wrought by the 1900 hurricane, which had submerged the island, destroyed most of its structures, and killed an estimated 6,000 people. After the harbor tour, I stop in next door at the Pier 21 Theater to see The Great Storm, a 20-minute film that relays the tragic events through photographs of the wreckage and heart-wrenching, first-person accounts of the disaster.

Several hurricanes have tested Galveston’s mettle over the last century, and the most recent, Ike, flooded the downtown district in 2008. However,  Galveston has once again rebounded, and the restaurants along the wharf have reopened. I make a beeline for the family-run Olympia Grill, attracted by its upscale nautical décor, wide wooden deck overlooking the harbor, and authentic Greek fare—and I’m not the only one. Families and couples fill the
tables of the open-air dining deck, gazing out over the busy waterway and occasionally fending off brazen seagulls that eye plates piled high with crab cakes, gyros, and dolmas.

Though I stuff myself on chicken pita served with tzatziki, onion, and tomatoes, and the Olympia’s classic spanakopita, I can’t resist heading over to The Strand for my all-time favorite dessert destination: La King’s Confectionery, an island staple for decades. There, I join the throng of tourists lined up at the
40-foot-long marble counter to order authentic, old-fashioned sundaes, malts, and other ice-cream treats. Jostling my way through the crowd, I peruse display cases loaded with chocolate truffles, pralines, and saltwater taffy, a specialty of the house. Meanwhile, at the back of the store, master candy-makers pull the sticky confection on vintage equipment and lob samples into the eager crowd of onlookers. I purchase a paper sack full of my favorites (lemon, root beer, and sour cherry) to take home.

The downtown area boasts a number of excellent eateries, from high-end establishments like Luigi’s Ristorante Italiano, famous for its handmade ravioli, and Rudy & Paco Restaurant & Bar, featuring exceptional grilled seafood, to casual diners like the Star Drug Store, first opened in 1917, where patrons still belly up to the horseshoe-shaped counter to order egg creams and pimento-cheese sandwiches. Tourists and locals alike swear by the turbocharged
espresso at MOD Coffeehouse, and the Oasis Juice Bar blends smoothies as exotic as the birds for which they are named. Though the Oasis tempts me with the Roseate Spoonbill, a mixture of watermelon juice and raspberries, I ultimately order a Brown Pelican, a delicious blend of banana, raw cacao, and rice milk.

Culture and entertainment options also abound. The Galveston Arts Center (currently on Market, while The Strand location is renovated) presents  exhibitions by established and up-and-coming visual artists, and The Grand 1894 Opera House hosts a diverse schedule of dance, theater, and music in a distinguished, historic setting. However, for many cruise-goers, shopping is the main attraction. Many of the stores along The Strand cater to vacationers with racks of brightly hued T-shirts, bikinis, sun hats, and flip-flops as far as the eye can see.

In search of souvenirs, I duck into Hendley Market, with its assortment of novelty items, antiques, and tchotchkes from around the globe. Here, finger  puppets and self-adhesive mustaches share display cases with Victorian jewelry, glass eyeballs, and nativity figurines from as far away as Kenya and Vietnam. Afterward, I browse the cluttered aisles of Colonel Bub bi e’s, a surplus shop stocked floor-to-ceiling with outmoded uniforms, excess canteens,
and other military paraphernalia. Those searching for something to read poolside on the lido deck need look no further than the Galveston Bookshop, an historic brick storefront just a few blocks off The Strand, where customers scan shelves stacked high with everything from paperback thrillers to vintage hardback editions of the classics. A resident orange tabby cat named Gus usually dozes next to the register, occasionally soliciting chin scratches.

Cruise passengers find many reasons to extend their trips to spend time in the port city, and several of the nearby hotels encourage this practice by providing free cruise parking when you stay the night prior to your departure. One of those hotels, the posh Tremont House, located a couple blocks south of The Strand in an elegant, four-story Italianate building, offers not only free cruise parking but also bird’s-eye views of the historic district from its rooftop terrace, where guests can watch the sun setting over the bay and ships maneuvering in the harbor.

Houston resident Susan Latimer, who has embarked four times from the island’s port, says that ”boarding a cruise from Galveston is like having your  vacation start early. You can show up ahead of time and make a day of it—or even a night,” With all that the island has to offer, some might even find it hard to cross the gangway and leave the lively city behind. Yet seafarers can rest easy knowing that downtown Galveston, with all its Victorian charm, awaits them on their return. Latimer affirms, “Coming back to Galveston makes the reentry easier to bear. Your vacation doesn’t have to end the second you step on dry land.”