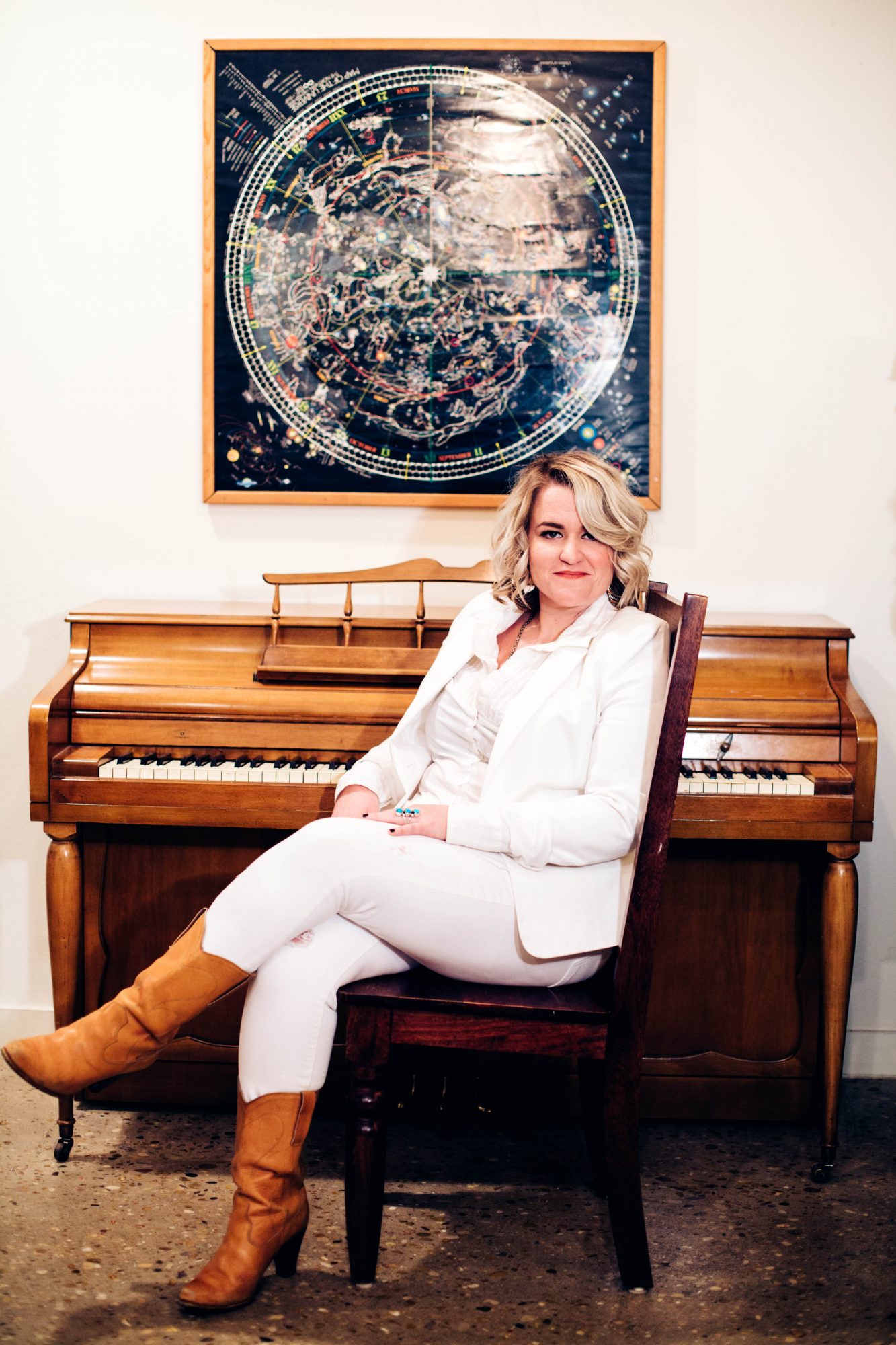 Making a name for yourself when you’re the granddaughter of a genuine Texas legend would be hard for anyone, but Emily Gimble has nimbly managed to stand out on her own.

The Gimble family is among the royalty of Texas music. Her fiddling grandfather, the late Johnny Gimble, is enshrined in both the Country Music Hall of Fame and Rock & Roll Hall of Fame. Her father, Dick Gimble, is a professor of music at McLennan Community College in Waco and an accomplished guitarist, mandolinist, and bassist who has played with stars like Bob Wills, Willie Nelson, Merle Haggard, and Charley Pride.

And now, Gimble—who was honored this year as the Official Texas State Musician—is carrying on the Gimble legacy through the challenges of COVID-19 with the Gimble Hour, a  livestream broadcast. (Check Gimble’s Facebook page for recordings of recent broadcasts.) The hourlong show from the Caldwell County home of Gimble and her husband, upright bassist Michael Archer, is loose, spontaneous, rollicking, and inevitably a whirlwind tour through American idioms from Western swing to boogie woogie and others. Above all, the couple is clearly having a good time, challenging each other musically and enjoying one another’s company in between.

Gimble started taking violin lessons at age 4 but ultimately found her place at the keyboard. She’s done her part living up to the Gimble family legacy as a powerful vocalist and hotshot pianist. Her resume includes stints in the Marshall Ford Band, Warren Hood Band, Asleep at the Wheel, and in the bands of singer-songwriter Hayes Carll and Woodstock singer Amy Helm.

Is being the State Musician of Texas a burden to have to live up to?

I don’t think about it that way. It’s just nice to have a tip of the hat from your favorite place on the planet. At first, I kept telling everybody I needed to practice. But I don’t feel it’s a burden. It’s just sweet. Floyd Domino likes to talk about it at every gig because he knows I’m low key. That’s his way of poking at me: “Welcome to the stage! The State Musician of 2020!” Part of it has to do with my grandfather, and carrying on somewhat, his legacy of his music. I don’t play fiddle, but I do sing his songs, and when me and dad play, it’s like from his spirit. The cool part is you get to be on the Texas touring roster for life. People know about you. There’s certain festivals and fairs where the organizers see “State Musician of Texas” and think, “Well, maybe we’ll book her.” I can also do library tours where I’ll play and talk about Western swing.

When did you realize your grandfather was a big deal?

When I was little, Papa [Johnny Gimble] would have me up on stage to play with him. I realized he was something special. Even then, at the age of 5, I knew there was no way could I live up to this person. When I lived in Waco, Papa played at the Brazos Nights event on the Brazos River every summer. He’d bring his motorhome, we’d sit outside in lawn chairs. I’m still finding records that he played on. A few years ago, I learned he played on a record with Paul McCartney. They played “Sally Gooden.” He played with everyone. He did everything.

At what point did you decide to pursue a life in music?

My graduating class at Crawford High was 28 people. The opportunities for music in school weren’t there, but it didn’t matter. I had people playing music all around me. I went to McLennan Community College for two years to get my associate’s degree for vocal performance. I’d started playing piano seriously. Right before I graduated from high school, my dad and grandpa both said, “You can’t just be a chick singer. You have to pick an instrument and learn it.” I moved to Austin in 2007 to get the rest of my education just from playing with people. I’d been coming down here all my life. Papa lived in Dripping Springs, and we’d come to Austin for gigs. We’d play as The Gimbles once a month at Guero’s. But I hadn’t moved out of my parents’ house. We are really close. Moving was kind of hard. I kept wondering, “Am I going to be able to make enough money to pay rent?”

I get the impression you and your parents are pretty close.

When you grow up in a musical family, music is a way of speaking to each other. It’s normal. Then at some point, you get et up with it, and it’s the only thing you can do.

Piano was always easy for me to see, to hear, and understand. The guitar always felt clunky. The fiddle is the hardest instrument to learn. So I started taking piano when I was 18. Practicing didn’t feel like practice. It was just fun.

What’s the best musician-to-musician advice your grandfather gave you?

“Play every chance you get, and be real lucky.” That’s a lot of gigs. I’d tell myself that a lot when I first moved to Austin and was just beginning to learn piano. Take everything. Say yes to everything. Show up and be professional and try to do your best.

You appear to be taking that advice to heart.

I do a lot of different things. I don’t know if that’s good or not. I can always play more, but for me to make time to do for myself, I feel like I’m run a little bit thin sometimes. I love working on other people’s music, but I want to work on my own music too, things I’m doing, things I’m writing.

Who are your mentors?

Floyd Domino and Danny Levin and Erik Hokannen. I’m still learning from them. Just like my grandpa did for them—how he taught them, the way he’d speak of things, the way they learned musical etiquette from him leading by example—they’re doing that for me. Danny and Floyd, I call them my uncles but they’re really more like friends. I can call them to talk about my life, about music decisions.

What’s your favorite recording you’ve made so far?

We had a record out called A Case of The Gimbles that came out around the same time I moved to Austin. Danny Levin produced it. Floyd played on it. That record makes me so happy. That’s my favorite record—recording with my grandfather and my dad and people who are like family, talking, goofing around, and playing our favorite songs. I was 19 when we did that.

How do you define Western swing?

It has to do with all the states and places that touch Texas. Oklahoma, you have your country music. Louisiana, you have a little bit of that Cajun spice. The twin fiddles came out of mariachi music. There’s something from New Mexico I figured out the other day [a reference to that state’s mashup of Pueblo, Mexican, R&B, and country]. Then it’s the music that was popular when Western swing was being invented—big band swing music. It has jazz in it. It’s contemporary because people are still playing it and writing new songs in that vein. When I hear Western swing played well, I hear a nod being given to what’s been done before: Here’s what Johnny did, and he stole it from JR Chatwell,  the tones, the way they solo.

Where do you enjoy playing in Texas most?

I have some good memories playing at Fischer Hall. The first time I played out there was with  Slim Ritchey. Kat Edmonson was in the band, and I was singing and playing piano. Later on that night, Guy Clark played. I’ve done several gigs there since. That room is special; it’s a Texas treasure. It’s where they filmed Honeysuckle Rose.

I really love Steve Wertheimer’s clubs, the Continental Club, the Continental Gallery, and C-Boy’s Heart and Soul. There is something about those rooms that keeps Austin music alive. The bands that play in there almost every night of the week are the best in town. [The clubs are currently closed because of coronavirus.]

I love old dancehalls. They’re the places where I grew up and where I heard Papa play the most. I have very special memories of that time with my family. When I get to play Gruene Hall with Flat Top Jones [the retro-country band led by singer Dallas Wayne, bassist Kevin Smith from Willie Nelson’s band, and fiddler Erik Hokannen], it’s like coming full circle. We do a lot of the same material that I played with Papa. Erik’s on the fiddle playing stuff Papa would have played. That satisfies my soul so much, to get to play with those guys. And in Gruene, there’s this historic energy of all the great players who have played there. With that band, I’m so lucky.