‘Fat Man on a Mission:’ Amarillo Man Promotes Good Health by Running a 5K in Every Texas County

Price Robinson is about halfway through his challenge, which he tackled to lose weight, see the state, and encourage physical fitness 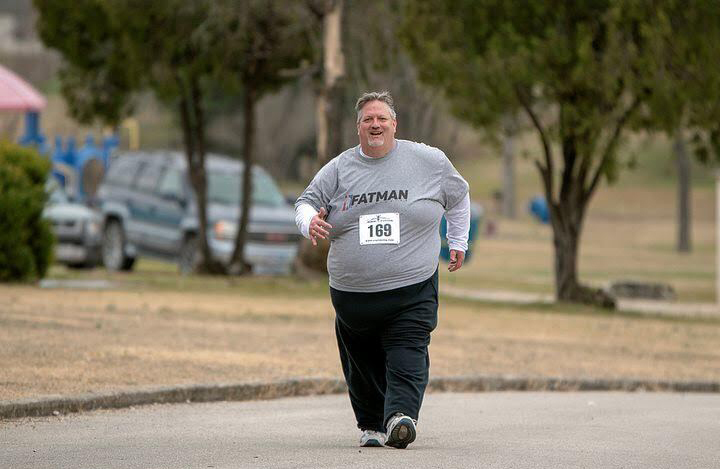 Price Robinson participated in the 5K Run to the Polar Plunge in Copperas Cove in January 2019. Photo Courtesy of DE Photography

When Price Robinson moved to Amarillo about four years ago, he was determined to continue a weight-loss effort he’d begun in Tennessee. Then he struck upon an ambitious idea: Why not finish a 5K in every Texas county?

“That was before I found out there were 254 of those buggers,” jokes the 52-year-old.

Now, Robinson is about half-way to his goal, having “turbo walked” 5-kilometer routes in 124 counties. Calling his effort “Fat Man on a Mission,” he says the project combines both his commitment to exercise and an opportunity to learn about the far-flung corners of Texas.

A native of Plano, Robinson’s initial motivation to lose weight also has its roots in Texas. Back in 2016, the lifelong Texas Rangers fan stepped on a scale and saw the number 495. Determined to change, he latched on to the baseball team’s mantra at the time, “Never Ever Quit.”

“I knew if something did not change what that next number would be,” Robinson says. “A quarter-ton is great if you’re a pickup. It’s awful if you’re a person.”

Robinson started his fitness overhaul by walking laps in his backyard swimming pool. Then he started walking from his front porch to the mailbox. “I’d be huffing and puffing, red-faced and sweating, but I’d done it,” he says.

He joined a running group in Tennessee and slowly built up his walking distance. Then he tackled his first 5K. “It took 2 hours, 31 minutes, and 28 seconds to finish, and I hugged every telephone pole the last 2 miles,” Robinson says.

When Robinson moved to Amarillo—where he manages a storage facility—a few months later and left his running group behind, he needed new motivation. That’s when he decided to enter a 5K in every county in the state. He notched the first Texas finish on Oct. 21, 2016.

So far, he’s lost more than 100 pounds. But he says his mission is about more than losing weight. “Every county I go to, I try to do a deep dive into their history and find out fun obscure facts,” he says.

At a race in Culberson County, he learned that Boracho Station reportedly got its name during a push to build a railroad line across Texas. A crew building from the east was outpacing a crew building from the west, until the westside crew delivered a prairie schooner full of whiskey to the easterners, who fell behind while they slept off their hangovers.

His favorite race so far? The Chuck Norris 5K in Brazos County, where the martial artist and actor himself stuck around to watch Robinson finish, then shook his hand. In Hudspeth County, the owners of a hotel invited Robinson to Thanksgiving dinner. And at the Chicken Run in Johnson County, a swarm of 4H students ran across the finish line with him.

Because not every county hosts a 5K, and many have been cancelled during the pandemic, Robinson sometimes drives to a county and walks a 5K route on his own.

Patrick Hight, of Round Rock, met Robinson at the Chuck Norris 5K and has since joined him for several races.

When the weather cools off, Hight plans to run with Robinson again. “I can relate to what he’s doing because I’m a two-time cardiac survivor.”

Robinson hopes to finish his quest in Dallas in 2021, timing the final 5K with a Rangers game. “That way it can end where it started—with the Rangers,” Robinson says.

He hopes he can inspire a few others to get healthy along the way, too. Robinson is working to set up a nonprofit organization called Fitness Mission 254 (for all those counties) to encourage others to improve their fitness by training for and finishing a Fat Man 5K.