Fine-Feathered Friend or Foe? The Pitfalls of the Pine Siskin 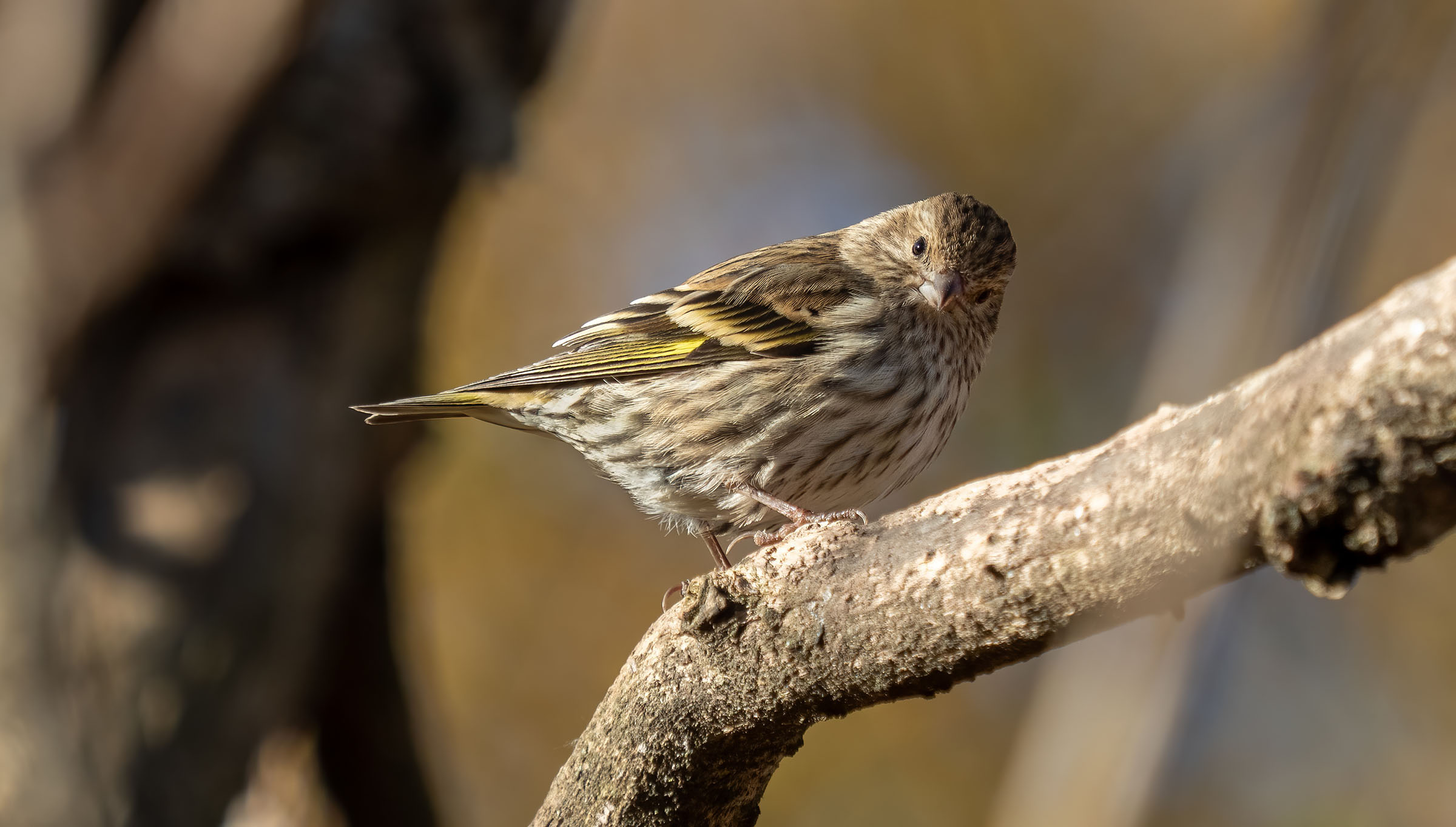 One of the things I most eagerly anticipated about moving into my new home on the lower San Bernard River was that finally, after many long years, I would have the opportunity to safely hang a bird feeder. At my two prior places of residence, such an act would have created what tort lawyers have termed an “attractive nuisance.” Many outdoor cats patrolled those Inner Loop Houston yards and gardens, and enticing birds there with free meals was considered irresponsible, something I’d be reminded of with every clump of feathers I’d find in the grass near those death-trap feeders.

And so, not long after my November arrival here on the river, I filled up a feeder with mixed seeds. Within a few days, I was delighted to be reunited with my old friends again—cheeping tufted titmice, belly-giggling chickadees, cardinals, and a wren or two, who though insect-eaters seem to enjoy hanging around the seed-lovers. It took me back about 40 years, to the time I first fell in love with birds watching them feed out the big picture window of our living room.

I was even more delighted when a single solitary yellowish-khaki, streak-breasted fellow arrived. I believed it to be an American goldfinch, perhaps immature, in its dull winter plumage. Soon one became four, and four became 16. Then one day, there were 50 of the things. It was like a mini-Hitchcock invasion, albeit with birds more comical than sinister.

In my excitement about this giant flock of goldfinches, I emailed my go-to expert for queries like this, Richard Gibbons, who is the conservation director at the Houston Audubon Society.

“Are you sure those aren’t pine siskins?” he asked.

Pines? I replied. There aren’t many pines down here in the Spanish moss country.

“They don’t need no stinkin’ pines,” he replied.

Gibbons advised me to listen for an upward trill in their call and look for a fork in the tail, and son of a gun, pine siskins they were. In misidentifying them as goldfinches, I made a rookie mistake. Most years, pine siskins—which are, in my defense, members of the finch family—rarely stray this far south and east. Some live year-round in the western range of the Sierra Madres and the Rocky Mountains, and their summer breeding grounds reach deep into the Canadian and Alaskan wilderness. In Canada, their range extends from the Maritime Provinces to the Yukon. Down here, they shun south and central Florida altogether and, most years, also the Texas Coastal Plain, even as adventurous stragglers.

But not this year.

Gibbons explained that siskins are an irruptive species, meaning their range can fluctuate greatly depending on food shortages in their traditional home areas. And this year is one of the largest irruptions in recorded history. A dearth of pine seeds in the boreal forests of the Great White North forced them south this year in greater numbers than, say, the semi-retired snowbirds from the upper Midwest.

Aside from a daily ruckus of common grackles, the siskins were boss birds of my neighborhood. And they were ravenous: I’d fill up my feeder at breakfast time, and a horde of dozens would almost immediately descend and attack the feeder as if they’d never eaten before. Unlike the dainty, mannered chickadees, who would light on the feeder, select a single seed, and take it elsewhere to eat, these fork-tailed barbarians would peck at the feeder greedily, causing cascades of seeds to tumble to the ground, where more of their number were hopping around waiting to devour them.

By mid-afternoon, the entire feeder would be empty. If I refilled then and there, they’d clear it a second time by sundown. (And somehow, it seemed like four or five of them each day would squeeze in through a gap between my door and the slab foundation, trapping themselves in my porch and hurling themselves into the metal netting of the screens over and over until I either shooed them out the now-open door or caught and released them.)

I was not alone in my amazement at these birds, as I learned from a tweet by Nicholas Lund, a.k.a. “The Birdist.”

weird how every bird on Earth is now a Pine Siskin

To be honest my thoughts toward them began to verge toward the uncharitable. They were eating me out of house and home. Perhaps, I hoped, a hawk with a taste for siskin might show up, if only to tamp down their unbridled enthusiasm a little. Or maybe I could send a message by renting a hungry cat, just to get us through siskin season. Then I started to hear reports that they come bearing a potentially deadly disease.

Per the Houston Audubon Society, there have been large and well-documented outbreaks of salmonellosis in the Pacific Northwest this year, resulting in mass die-offs of siskins and other birds that land on feeders. The disease, caused by the same salmonella bacteria that sickens humans, and transmitted via fecal contamination of seeds and water, has apparently made its way to Texas.

Earlier this month, Audubon folks advised bird watchers to be on the lookout for birds that are lethargic, slow to react, or that look alternately gaunt or overly fluffed up. Or dead. Dead birds near a feeder would be a very bad sign indeed. Should any of that happen, suspend all bird-feeding activities until the greedy little siskins move on.

But should the birds around your feeder appear healthy and happy, it’s on you to keep them safe. That would mean taking down your feeder each and every day, taking it apart, and cleaning it thoroughly with boiling water and/or a bleach or vinegar solution.

All that work so these hordes of siskins could drain it twice a day. What a deal.

I never did detect any sickness from my flock, but as soon as we got past the aftermath of the Big Freeze from February’s winter storm, I shuttered the bird buffet for the time being. It’s been hanging there empty for a week or two now, and I think it’s almost worth the risk of cleaning, filling, and hanging it up again. Siskins should be departing for Canada any day now, if they haven’t left already, so I think I’ll be safe. But at the first sign of a siskin, down she goes. I sincerely hope this year is a better one for Canadian pine nuts.