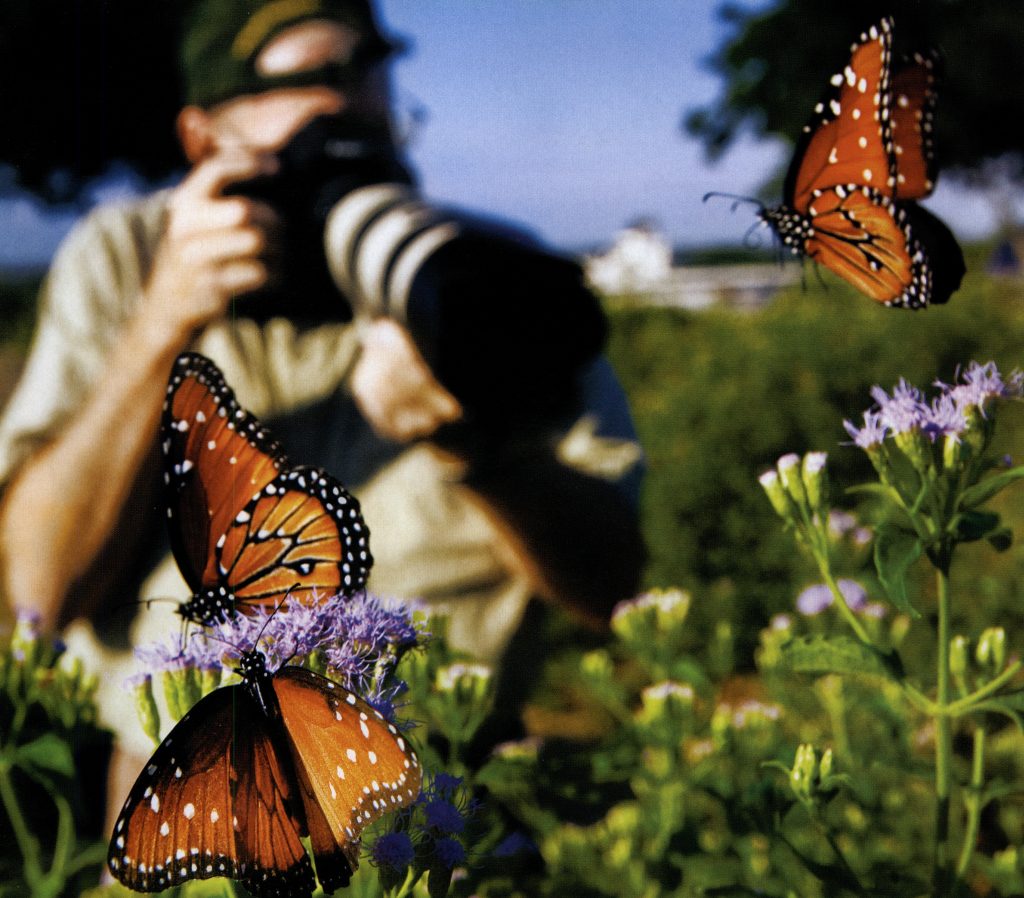 It was a spectacular fall morning in Hidalgo! The sun had just begun to illuminate the yellow-flowering esperanza shrubs at the Old Hidalgo Pumphouse when the first few butterflies appeared. The initial visitors included a rare Green-backed Ruby-eye and a number of Brazilian Skippers, all flying swiftly from bloom to bloom, feeding voraciously after a night of quiescence. Now they were busily sucking nectar from the esperanzas. Their quickness barely allowed time for good sightings or identification. Soon, however, more butterflies showed up, and many of those seemed less capricious, offering opportunities for better observations and even photos. Representatives of more than two dozen species eventually arrived that morning, including Malachites, Orange-barred Sulphurs, Julia and Zebra Heliconians, Gulf and Mexican Fritillaries, Mexican Bluewings, and other beauties.

Such scenes take place daily at numerous sites throughout the Lower Rio Grande Valley, a 4,300-acre area in extreme South Texas. Nowhere else north of the Mexican border offers visitors 300-plus butterfly species within a comparable area. Why such a wealth of these gorgeous creatures? It’s largely because of the region’s butterfly gardens-gardens filled with flowering plants and essential larval food plants that attract and sustain butterflies. In some gardens, caretakers place banana mash (a mixture of bananas, beer, and sugar) and over-ripe fruit on feeding trays or “paint” the mash on trees and posts to attract species that seldom or never feed on nectar. With such bounty so readily available, butterflies remain here rather than flying elsewhere.

The region offers more than a dozen of these specialized gardens, including long-established examples at Santa Ana National Wildlife Refuge and Bentsen-Rio Grande State Park. However, as a retired biologist and longtime nature writer, I consider four newer gardens extra special.

One of those is the butterfly garden at the Old Hidalgo Pumphouse (described earlier). This multipurpose destination features a restored pumping station built here in 1909 (the accompanying museum showcases the only steam-driven irrigation pumps that remain along the Rio Grande) in a manicured, 20-acre setting. One of nine sites along the Rio Grande that make up the World Birding Center, the Old Hidalgo Pumphouse attracts butterfly enthusiasts as well as birders, thanks to the garden. Since recordkeeping started in 2008, staff and visitors have observed a total of 162 butterfly species.

Mike Rickard, a volunteer who leads butterfly walks here weekly in season (October through December, when many species of butterflies are on the wing in the Valley), has reported such rarities as Creamy White, Marius and Ruddy Hairstreaks, Mimic Tigerwing, Erato Heliconian, Blueeyed Sailor, Rosita Patch, Variegated Skipper, and Common Bluevent.

“Considering that this site is a city park landscaped with flowering plants, a surprisingly large number of butterfly species have been found here, including some true rarities,” says Rickard. “In August, a visitor spotted a Tehuacana Cloudywing—the only example of this Mexican species ever seen in the United States. The excitement was over the top!”

Rickard and his wife, Ginny, moved from Houston to the Valley several years ago because of his passion for butterflies. In the winter months, he meets dozens of Winter Texans who also love these sprightly insects. “I enjoy sharing information and helping people find butterflies,” he says, “especially people who are new to the area. They get really excited when they see species they haven’t seen before.”

The Old Hidalgo Pumphouse garden not only attracts birders and butterfly aficionados, but serves as a gathering place for both Hidalgo residents and visitors from Mexico. They enjoy taking family photographs amid the colorful flowers and swirling butterflies. A large amphitheater hosts dance groups, music events, and summer movies, too.

The Estero Llano Grande State Park, in nearby Weslaco, boasts another outstanding butterfly garden. This 200-acre park, because of its shallow lakes, ponds, woodlands, and thorn forest, offers one of the most habitat-diverse areas in the Valley. Birders often crowd the visitor center deck, which overlooks one of the ponds. And the entrance walkway and adjacent paths are lined with shrubby blue sage, Texas lantana, and cenizo, plants that attract hummingbirds and butterflies alike.

Park Interpreter John Yochum leads the butterfly walks. “We’ve recorded more than 150 species,” says Yochum, “including three relatively uncommon species that are plentiful here year round-the Potrillo Skipper, Mazan’s Scallopwing, and Mexican Bluewing. I credit our plantings of common velvet burr with attracting the first two; the adelia we have is responsible for the Mexican Bluewing.”

According to Yochum, the park makes a concerted effort to attract more butterfly species by developing varied wildscapes throughout the property. “One of the things we’re doing is adding native plants that provide both larval food plants and nectar sources, such as tropical milkweed and crotons,” he says.

Since the park opened for visitors in 2006, it has become known as a good site for spotting butterfly rarities, such as the Ruby-spotted Swallowtail, Bromeliad Scrub-Hairstreak, Blue Metalmark, Tailed Aguna, and Doubledotted Skipper.

Butterfly seekers also flock to Falcon State Park, where longtime volunteer Fran Bartle established a one-acre, densely-planted butterfly garden in 2006. That first year it attracted more than 150 species, two of which had never been spotted before in the United States: Spot-celled Sister and East-Mexican White-Skipper. My wife, Betty, and I were fortunate to see both species on the same day. Their presence created a frenzy among area butterfly enthusiasts; folks drove in from all over South Texas. But the highlight that day was the tiny, green Tele a Hairstreak; dozens of photographers captured it as it perched on croton flowers. Before appearing in the Falcon garden, it had been recorded in the United States only once, decades earlier.

Some of the other surprise species that have been found in the garden include Strophius Hairstreak, Lacey’s Scrub-Hairstreak, Banded Patch, Eight-spotted Longtail, and Evan’s Skipper. This site proves the old adage that if you provide flowering plants, butterflies will appear.

Although Bartle has moved away from the region, staff and other volunteers maintain the butterfly garden, which now includes walking trails and interpretive signs. A kiosk at the entrance offers information about butterflies and the plants that attract them.

The 100-acre National Butterfly Center near Mission, owned and operated by the North American Butterfly Association, ranks as the largest and most productive of all the Valley butterfly gardens—both in terms of numbers and diversity. Established in 2004, the site features an impressive hackberry woodland and 30 acres of butterfly gardens. “On many days, you can see tens of thousands of individual butterflies,” says NABA founder Jeff Glassberg.

The site has already attracted almost 200 species. It’s one of the best places in the Valley to find such eye-catching species as the Silver-banded Hairstreak, Red-bordered Metalmark, Red-bordered Pixie, Crimson Patch, White Peacock, Guava Skipper, and Two-barred Flasher. And on the right day, visitors may spot such rarities as the Four-spotted Sailor, One-spotted Prepona, Broad-tipped Clearwing, and Turquoise Longtail, each of which was seen here for the first time in the United States.

Beginning this month, staff and volunteers will plant some 100 new gardens, with each garden designed for a specific butterfly. For example, the Giant Swallowtail garden will contain native plants such as baretta and mountain torchwood, caterpillar foodplants for Giant Swallowtails, as well as Giant Swallowtail nectar sources, such as scarlet sage.

“The center’s goals involve public education, as well as scientific research and conservation of butterflies and their habitats,” says Glass berg. The new Visitors Pavilion, which opens on October 28, will house interpretive exhibits on butterfly biology and such topics as “Butterflies and Human Culture” and “Why Care About Butterflies?” Docents will also lead walks through the gardens.