Friends with the Devils (River, That Is) 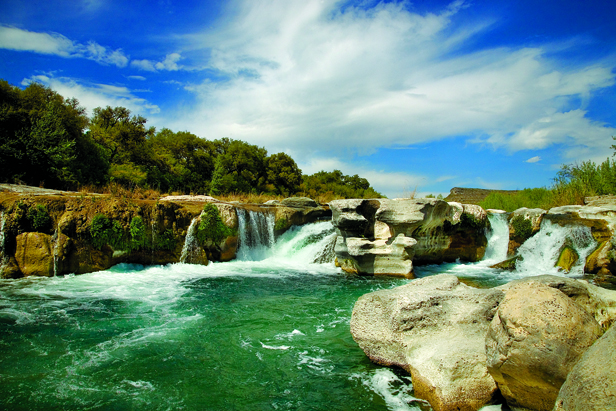 As dusk light settles across West Texas’ Devils River, the wind subsides and a languid dispassion sinks into this bony stretch of clear, uncompromised water. The river’s songbirds ponder their ruffle-less counterparts in amicable detachment, blue herons poise equitably in the shadows, and diamondback water snakes oscillate the balm. The lull renders parity to the surface as each last ripple echoes the stasis that drives our natural world. The ruinations of luck, loss, and love diminish against the reflection of the falling light as nature beats in cadence with the accord. At last, daylight peaks, the star is snuffed out, and peaceable spirits, once earthbound, ascend.

Sound like a paradise? Yes, and it’s surprising to discover such a place—Devils River—attached to a hellion’s name. But, in truth, the Spanish had several names for the Devils River, the target of watershed drainage for parts of Crockett, Schleicher, Sutton, and Val Verde counties on its way to Amistad Reservoir on the Rio Grande. In 1590, explorer Gaspar Castaño de Sosa called it the Laxas, meaning lax, or having a loose and porous structure. Later, Spanish settlers called it the San Pedro after the martyr Saint Peter. The river conveys benevolence on the surrounding despoblado (uninhabited, deserted land) in much the same way that its namesake Saint Peter bestowed blessings, providing sanctuary throughout a parched and stony land.

But such appellations ended in 1840 when Texas Ranger Coffee Hays arrived at the river’s edge. He looked down on the water and decided it likely belonged to the devil, not Saint Peter. Subsequently, to soften the blow against a strikingly beautiful country, the apostrophe was dropped, but the name “Devils” stuck.

The details of the river’s past often seem ambiguous, due in part to the paucity of historical references before the 1800s, and limited access to its banks throughout modern times. It is also possible that the Devils’ slim record is a result of its remaining almost exclusively within the domain of the natural world. Very little has changed along its course throughout the last 150 years. To travel the Devils by canoe or kayak (the only options) requires a strong will, skill, and a commitment of time and muscle power necessary to maneuver its white water and headwinds. But the Devils and its country can also be appreciated from several points along the state’s rural byways, including one route that begins in Val Verde County.

Start your tour in the ranching community of Comstock, near the intersection of US 90 and Texas 163, established as a station on the Galveston, Harrisburg, and San Antonio Railway in the 1880s. From here, a short stretch north along Texas 163 carries travelers high above the Rio Grande flood plain where vistas southward reveal the profile of Sleeping Woman Mountain in Old Mexico. Less than a dozen miles farther north lies Dead Man’s Pass, a squeeze between rolling bluffs that may have been a favorite ambush site. Named for the skeletal remains discovered long ago in nearby Deadman’s Canyon, the pass signals the halfway point between Comstock and Baker’s Crossing.

The Devils River makes its first appearance along Texas 163 at Baker’s Crossing. The crossing was the second in a series of 20 river fordings on the historic route from San Antonio to El Paso established by the Whiting-Smith Expedition of 1849. Wagon trains negotiated the river’s shallows and risked confrontation with Apaches along this Devils River Valley trace. Nearby, in 1857, Camp Hudson was constructed to protect travelers from frontier dangers. All that remains of the camp lies in history books.

Today, Baker’s Crossing serves as a private camping area and river put-in. Descendant Sheppard Baker inhabits the family home that sits above the river crossing and maintains the 12 campsites available for day picnickers as well as paddlers preparing to tackle the long trip downstream.

The Devils’ headwaters can occasionally appear hellish, particularly when witnessed engorged in full-fledged calamity. The river is fed first by a dead-dry watershed, giving rise in northeastern Crockett County and continuing southward along draws known locally as Dry Devils, Granger, Buckhorn, Rough, Johnson, Flat Rock, and House, just a few among many. During summer’s monsoon rains, these trajectories channel the runoff, swelling the arroyos to cattle-choking proportions, overpowering a waterway that is sustained otherwise by the gentle flow of underground springs.

As Texas 163 continues northward alongside the Devils, the highway passes near the river’s headwaters at Pecan Springs, an oasis that lies within the private confines of the Hudspeth River Ranch. Claudia Abbey Ball, the ranch’s matriarch and granddaughter of the late “Cowboy Congressman” Claude Hudspeth, continues to operate the impressive spread, and her stewardship is responsible for the superb condition of the Devils here. Although not accessible to the public, the Devils can be seen from the road and reveals a glass-clear waterway and a riparian habitat unmatched in the state.

Above the headwaters, the Devils becomes an intermittent series of pools and gravel draws. While all of this land is private (trespassers along the Devils have been greeted with a warning shot) wildlife freely inhabits these watery ecosystems, and watchful travelers may spot migrating osprey, belted kingfisher, and beaver.

At the ghost town of Juno, travelers may tum onto RR 189 and head east through Devils River watershed country, crossing the many dry draws and arroyos that feed the river and flood dangerously when inundated. Here, goat and sheep ranching share the land with oil and gas drilling. Evidence of both dominates the landscape along RR 189 to the intersection with US 277, as well as northward along US 2 77 to Sonora.

Sonora, seat of Sutton County, lays claim to the Devils more readily perhaps than any other town simply because it bestowed the river’s name to its oldest continuing operating business-the Devils River News. The 75-cent weekly began publication in 1890 and covers the typical fare found in most rural American towns-local elections, track meets, softball schedules, and the like. Sutton County’s magnificently restored courthouse, a Second Empire flourish of mansard roofing, fancy iron cresting, and stone quoins, succeeds in encapsulating the Napoleon III era-French style that Texas architect Oscar Ruffini sought. The interior wall stenciling and glazing reveals handsome detail throughout, particularly in the impressive courtroom. Dining tip: The Sutton County Steakhouse, along Interstate 10 next door to the Days Inn-Devils River, may serve the best chicken-fried steak in all the land.

Heading back south along US 277 from Sonora for approximately 60 miles will bring travelers to Dolan Creek Road and a sign for the Devils River State Natural Area (SNA). Dolan Creek Road, a gravel roadbed prone to washouts during heavy rains, travels westward across private properties before arriving at Devils River SNA around 22 miles later. The SNA is a favorite public access point for the Devils River and, for most Texans, represents the heart of the river’s natural world.

Devils River SNA, once known as the Finegan Ranch, offers primitive camping, bunkhouse rentals, hiking and biking trails, and a river put-in by the park concessionaire for canoes and kayaks. Paddlers who wish to launch a canoe or kayak are provided direct access to the river. Otherwise, visitors must hike or bike the final mile along the SNA’s main gravel road to the river’s edge.

After crossing the usually dry Dolan Creek, hikers top a small rise before the river reveals itself-an aquatic ripple across an endless desert vista. Springs are responsible for almost 80% of the Devils’ flow, rendering it remarkably clear. The river consists of long, deep pools, wide shallows, and turbulent rapids. The placid surface of the river belies a significant current that will carry a swimmer caught unawares quickly downstream. But that shouldn’t deter visitors with strong swimming skills from snorkeling the submerged limestone edges of the river channel. The fish are plentiful, including catfish, bass, and minnows, and it is not uncommon to see turtles sunning in groups on exposed boulders. Visitors can make like turtles themselves and stretch out along the shoreline’s limestone ledges, spending the entire afternoon doing absolutely nothing.

But for mountain bikers, hikers, and equestrians, Devils River SNA’s 12-mile multi-use Loop Trail provides a chance to commune directly with the river’s spirits. Once trekkers ascend to the escarpment above the river, the views are vast and stark, offering a minimalist’s aesthetic on a grand scale. The geology consists of limestone tiers, topped with fat, rounded caps where a series of windmills echo in the distance. Almost six miles of the trail wander across semi-desert grassland where a classic triad appears: Edwards Plateau meets Trans Pecos meets South Texas Brush Country. And if trekkers are lucky enough to hit the trail at the right time, they can spend those miles knee-deep in wildflowers.

Downriver from the SNA, the Devils is joined by the waters from Dolan Springs and, together, they tumble over Dolan Falls. The falls and surrounding area lie within the stewardship of the Nature Conservancy. While the Dolan Falls area isn’t regularly accessible to the public, the Nature Conservancy periodically offers volunteer opportunities associated with the preserve. River runners are required to negotiate a safe portage around the falls, because the drop and its powerful hydraulics will snap a boat in two.

The final destination of the Devils’ flow was once the Rio Grande, but now the river empties into the mammoth Amistad Reservoir, the centerpiece of the National Park Service’s Amistad National Recreation Area. Here at Amistad, the Devils and the Rio Grande have merged into a massive, binational lake covering nearly 67,000 acres. The Devils arm of Amistad can be accessed at Rough Canyon Marina on Park Road R2, off US 277 as it heads south into Del Rio. Anglers can cast from the shores or motor along the shallows, working the inundated brush and submerged outcrops for bass. Picnic ramadas, a fee-based boat ramp, and a public fishcleaning station are all available courtesy of the NPS. In addition, visitors will find a hotel, bait shop, boat rentals, and boat storage, an ironic array of recreational services for a river that begins with a clear-cut indifference to human endeavor. It is easier to embrace the river’s moniker here: Seen from the air, the river and the lake merge to form a snarl as the Devils undulates like the whipped tail of an Amistad dragon. But, like its name, the resemblance is only a human invention. The Devils River has never been the stockpile of sinners or saints. It has, instead, always belonged to nature.

The Devils River, a pristine, whitewater river in southwest Texas, flows through Sutton and Val Verde counties into the Amistad Reservoir on the Rio Grande near Del Rio.

For details regarding Devils River State Natural Area, call 830/395-2133 or visit the Web site. All fees and reservations are handled through Texas Parks & Wildlife’s central reservations at 512/389-8900.