South Padre Island can coax you out of a shell 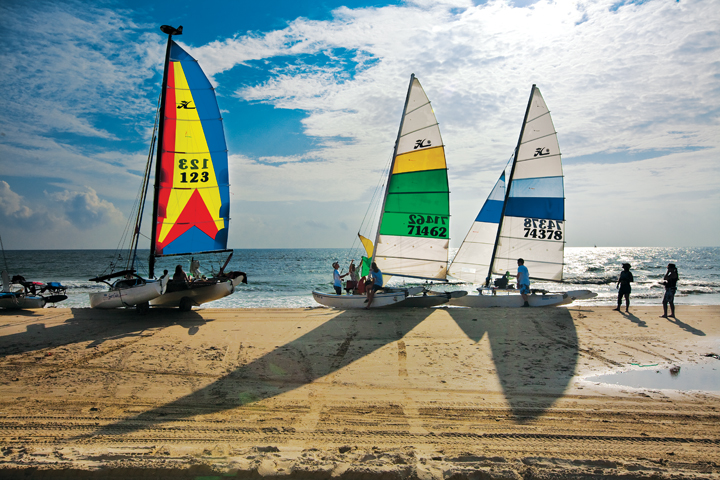 The annual Ruff Rider Regatta, held at South Padre Island in the fall, welcomes nearly 50 sailboats from across the United States. (Photo by Erich Schlegel)

Every time I walk on the beach—listening to the roar of the ocean, watching quarter-size ghost crabs skitter into the surf, admiring the agile antics of dive-bombing pelicans—I can’t help but ponder the planet’s complexity and magnitude. These grains of sand I’m walking on? Before hundreds of years of tides tumbled them into fine grains, perhaps they were the pearlescent shells of marine mollusks, or garden stones in the Yucatan Peninsula, across the Gulf of Mexico. How mind-bogglingly connected everything is! And where is my place in the dynamic mosaic of experience?

I’m meditating on these philosophical topics as I stroll the beach at South Padre Island. If you’re like a lot of people, when you hear “South Padre” you think of the raucous bacchanalia that overtakes the island during spring break, when the beaches become hormone-charged playgrounds for college students gone wild.  Maybe you’ve gone wild here yourself; if so, join the club. More than 45,000 students from across the U.S. descend on South Padre each March, after all, so the island comes by its “Padre Hearty” reputation honestly. (There’s a reason why the Travel Channel recently declared the scene on the beach behind the Isla Grand Resort the “largest beach party on the planet.”) But, as I discovered on a recent fall visit, this subtropical getaway—a 34-mile-long barrier island first charted in 1519 by Spanish explorer Alonso Álvarez de Pineda— offers more nuanced fun for visitors of all ages.

I’m meeting sand sculptor Lucinda Wierenga—aka “Sandy Feet”—for a sand-castle lesson on the beach outside the Palms Resort, an unassuming two-story hotel with one of the island’s surprisingly few beachfront restaurants. When Wierenga’s not traveling on the international sandcastle competition circuit, she gives lessons here on SPI. She’s slender and tanned, with well-muscled arms, and I understand how she earned the physique when she shows me some tricks of the trade.

‘Working with sand is so immediately gratifying.’

We select a spot barely on the dry side of the tide line, plop down on the sand, and dig to the water table a couple of feet below. The physics of sandcastle-building, Wierenga tells me, has everything to do with compaction. With both arms deep in the hole, she scoops up a pile of wet sand and, in one fluid maneuver, begins building the castle’s foundation with a practiced move I’ll call the “Drop-and-Jiggle.”  Many Drop-and-Jiggles later, we begin to carve turrets, bridges, windows, and balconies in our mound of compacted sand, using tools Wierenga has adapted from plastic tableware and a variety of household implements. Passersby soon stop to admire our work.

“Working with sand is so immediately gratifying,” she says. “If your first attempt doesn’t work out, you just smash it down and start all over again. It’s very freeing. People think of building sandcastles as a kids’ activity. But I’ve learned that adults are the ones you can’t drag away.”

Wierenga grew up in Michigan, and played with sand on the beaches around the Great Lakes. “But Lake Michigan sand won’t do what South Padre sand will do,” she says. “ Here, it’s fine-grained, and sticky from the natural clay and silt carried to the Gulf from the Mississippi River.”

The Mississippi, the world’s third largest drainage system, releases more than 200 metric tons of sediments each year into the Gulf of Mexico and Mississippi delta. This means that when the river floods, visibility in the Gulf suffers. The next morning, I’m on deck of the MV Diver I, suiting up to go snorkeling around a manned natural gas rig known as Little Sara, nine miles offshore, and this is disappointing news.  It has been an exceptionally rainy year.

Dive Captain Tim O’ Leary assures the scuba divers aboard that water clarity improves in deep water, but advises us snorkelers to keep our eyes open despite the murky surface conditions. The rig supports huge schools of snapper, ling, blennies, sergeant majors, and wrasse, and while we may not spy the whale sharks spotted here only the week prior, we’ll still have an adventure—and a close-up look at the Gulf’s diverse ecosystem.

From the boat, the rig resembles a giant yellow jungle gym, and the sea appears relatively calm. In the water, though, I have a different perspective. The rig’s steel pylons extend 100 feet to the ocean floor, and they’re covered with dark green barnacles. “Look, don’t touch,” says O’Leary. “The barnacles will slice you up.” The waves toss us back and forth, and we work hard to control our position. I feel a faint prickly sensation on areas of exposed skin—tiny stinging cells broken during rough weather from jellyfish, coral, and stingrays, I learn later. I watch snub-nosed blennies and silvery lookdowns dart among the pylons, and then squint through my mask at a lone barracuda—angular and gray and somehow menacing despite its comical underbite. It seems to coolly size me up, then sea-swagger away.

“The Little Sara dive is definitely for more experienced snorkelers,” O’Leary tells me later. “But we have a wide array of snorkeling sites for novices—like the Turtle Grass Flats in the Laguna Madre, which is only about three feet deep. We can take divers and experienced snorkelers to the Texas Clipper, a sunken merchant marine training vessel that is by far our most popular dive spot.”

On the 20-minute ride back to the island, we trade salty fish stories and watch bottlenose dolphins surf in our bow waves.

‘We don’t touch them. We don’t feed them. But they definitely interact with us. Even when we do birding trips, I would never ignore the dolphins.’

To learn more about the area’s dolphin population, I take a tour with Scarlet Colley, who has been documenting dolphins—primarily in the Laguna Madre, where they are smaller than offshore dolphins—for 15 years. Seven years ago, she and her husband, George, opened the South Padre Island Research Center and Sea Life Nature Center, across the Queen Isabella Memorial Bridge in Port Isabel, to educate the public about dolphins and the area’s other wildlife. She takes a decidedly anthropomorphic view of how they relate to each other, and to us. Her dolphin-watch tour provides an intimate look at the 150-member Atlantic bottlenose pod that makes the bay its home.

“I like to call them the Laguna Madre tribe,” she tells us, guiding her Laguna Skimmer research boat out into the bay. Only a few minutes pass before
Colley’s dog Rozzi begins to bark, alerting us to our first dolphin sighting, a mother-daughter duo that leap from the water and chatter at us. Colley  recognizes the bay’s dolphins by their dorsal fins, which often show scars from scuffles with other dolphins, or run-ins with boat propellers or fishing rigs.

She’s full of stories. “Last summer,” she tells us, “we had a young dolphin who had become entangled in fishing line; her name is Mohawk. As she grew, the line was cutting into her flipper and across her eye; it would have eventually killed her. So we got a rescue team together. Mohawk was still with her mother, and I spent four weeks learning their habits.”

Rozzi interrupts the story with more yapping, and Colley points out another dolphin group cavorting around a shrimp boat. And then she continues her tale. “We were able to get Mohawk up on a mat, and our team carefully cut all the fishing line away. The mother seemed anxious at first, but she seemed to know we were trying to help. Finally, we released the baby, and they both came to the boat—as if they were trying to thank us.

“I feel as though the dolphins have accepted me as one of their tribe,” Colley tells me. “We don’t touch them. We don’t feed them. But they definitely interact with us. Even when we do birding trips, I would never ignore the dolphins.”

I see more dolphins later that afternoon as I kayak along the bayside with Glenn McKinlay and Karen Pfeiffer of On the Beach Surf Shop, the island’s go-to spot for watersports. Surfers, bodyboarders, kiteboarders, and windsurfers  have depended on this shop and its employees for equipment, expertise, and camaraderie since 1976. But paddleboarding—also called stand-up paddle surfing (or SUP), a sport that entered the U.S. about a decade ago—is the new hot sport in Texas, she says.  “Paddleboarding is all about balance and core stability,” says Pfeiffer, who gives SUP lessons to beginners of all ages. Knees slightly bent, she stands on a narrow, nine-foot board and uses a long paddle to pull her through the water; the beginners in our group use wider boards. Together, we paddle toward the north side of the island, where the new South Padre Island Birding and Nature Center recently opened. “Stand-up surfing is soothing to my soul,” she says, “plus, it’s a great workout. We get a lot of windsurfers and kite boarders at the shop, and if there’s no wind, they go paddle boarding.”

Later that evening, I’m walking again on the beach, and I think about Glenn McKinlay’s unusual story. He grew up in Nottingham, England, and was destined to work in the coal mines, like his father. But he discovered windsurfing through a local youth club; in 1983 he broke a world speed record and eventually wound up on South Padre Island. “Life has some strange twists,” he told me. “I was working in the mines and came here on vacation, to go windsurfing. And I loved it—I didn’t have to wear a wet suit, and there were dolphins swimming around me; it was pretty much like paradise.”

I know what he means. It’s that time of day when the grays of the sky and sea blur together, and I can’t tell where one ends and the other begins. In the wet sand, my footprints disappear almost immediately, and it’s pleasant to contemplate the unexpected interconnectivity of life.