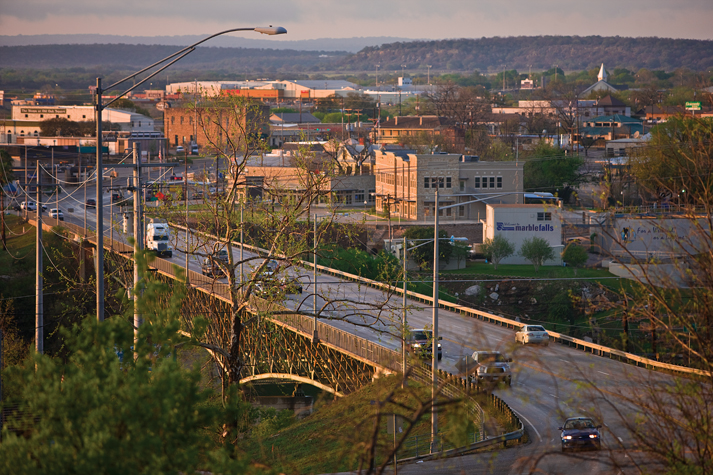 Along US 281 on the hillside just south of the Colorado River in Marble Falls, an historical marker honors Oscar J. Fox, the Western composer who set existing poems to original music to create such cowboy standards as Git Along Little Dogies. That very spot, with its sweeping view of the Hill Country and across the bridge over Lake Marble Falls, moved Fox, who was born in Burnet County, to write the music for the 1925 The Hills of Home. And I have to say, I’m with Mr. Fox: That entryway into Marble Falls from the south never fails to inspire.

With its rich history, bucolic setting, and range of diversions of both the indoor and outdoor variety, Marble Falls has always been one of the gems of the Highland Lakes region. The town’s namesake waterfalls once cascaded 20 feet along the river, but became engulfed by the lake when Max Starcke Dam was built in the 1950s.

Today, Marble Falls hosts such contrasting annual events as the LakeFest Drag Boat Races in August and October’s Sculpture on Main project, and the Bluebonnet Music and Fine Arts Festival (March) and blazing Walkway of Lights during the holidays. There’s a lively art scene with lots of live music. And as long as that spectacular southern “front door” offers the view that it does, Marble Falls will seem like a picture-perfect getaway.

One of the town’s historic lodging  options, the 1907 Wallace Guest House features five suites appointed with turn-of-the- 20th-Century antiques. But on this trip, I start out at the picturesque Horseshoe Bay Resort Marriott Hotel on the south shore of Lake LBJ. I’ll spend the rest of my visit at the cozy Boat House of Hugh and Cindy Vaughn in Kingsland. A single-story retreat sitting on stilts above a channel off Lake LBJ, The Boat House sleeps four comfortably and has an outdoor kitchen, hammocks, and a fishing pier. Hugh and Cindy prove to be exemplary hosts, as well as great sources of Marble Falls insider tips.

You don’t have to be a resort member to stay at the Horseshoe Bay Marriott, and as a guest, you’re free to use the resort facilities. Since it’s raining the afternoon I arrive, I decide not to make my once-every-blue-moon attempt to play golf, a circumstance for which the proprietors should be eternally grateful. But a drive around the 7,000-acre resort property reveals three 18-hole courses (plus an 18-hole putting course), numerous villas and condos to supplement the 385-room hotel, a spa, swimming pools, tennis courts, and even a private airstrip for the real high-rollers. That night at the Yacht Club on the marina I enjoy a tender, textured, bone-in filet that oozes beefy flavor. This meal, combined with the savory red beans and rice I’d had for lunch at The Real New Orleans Style Restaurant (a Round Mountain diner established by a church congregation displaced by Hurricane Katrina), will doubtless provide the best eating day of my trip.

The next morning begins with one of life’s true pleasures: breakfast at the Blue Bonnet Cafe, a classic country diner famous also for its chicken-fried steak
and “home-baked” pies (best-sellers include coconut cream and lemon cream or meringue). Then, to get the lowdown on the Sculpture on Main program, I drive a few miles east of town to the Pogue Sculpture Gallery and Foundry, Inc. Sculptor Dan Pogue gives me the quick tour of his digs, which includes looks at some of his majestic works-in-progress. Returning to town, he shows me the sculptures displayed year-round on the sidewalks, medians, and plazas of Main Street (a handful more are scattered off Main).

Marble Falls has recently polished its Main Street with a significant facelift, and the 37 artworks contrast nicely with storefronts that in some cases are a century old. We see Joel Lacome’s imposing, resin Soundstone abstract Frozen Dance just south of Third Street; and Pogue’s own bronze La Fiesta in front of the Uptown Marble Theater. They will remain here for a year following an annual October juried competition that attracts sculptors from all over; then some pieces will be sold to make room for newer ones.

Since it has shaped up as an art day, I stick around the Main Street area that afternoon. The jSpace and Riverbend Fine Art galleries and Patina, a store that bills its wares as one-of-a-kind art and home decor of Spheres beneath the ageless Hanging Tree at Old Oak Square; John Van Camp’s lime stone abstract Frozen Dance just south of Third Street; and Pogue’s own bronze La Fiesta in front of the Uptown Marble Theater. They will remain here for a year following an annual October juried competition that attracts sculptors from all over; then some pieces will be sold to make room for newer ones.

Since it has shaped up as an art day, I stick around the Main Street area that afternoon. The jSpace and Riverbend Fine Art galleries and Patina, a store that bills its wares as one-of-a-kind art and home decor (think vibrant paintings, handcrafted furniture, and accessories), display the most striking work, much of it local, and both wildly eclectic and wildly colorful. And at The Falls on the Colorado Museum, I admire a faded black-and-white photo of former Marble Falls mayor Ophelia “Birdie” Crosby Harwood riding sidesaddle in a parade-Harwood was the first female mayor in Texas and the first female American mayor ever put in office by an all-male electorate (in 1917, three years before suffrage began).

I devote the next day to the great outdoors, which in these parts means two perennial favorites: Longhorn Cavern and the Vanishing Texas River Cruise. Longhorn Cavern, a few miles north of town, has a novel history. During the 1920s, when it was owned privately, the cave housed a nightclub, complete with a ballroom featuring a nine-piece band, a restaurant, and an illegal bar. As visitors can clearly see during the 85-minute standard tour, there are virtually no stalactites, and the cave has less color than some others I’ve toured. But that’s maybe what I like best about it: With shades ofbrown contrasting so subtly that the effect sometimes borders on monochromatic, it seems like the most Texas cave, sort of an underground equivalent to the Western plains.

The Vanishing Texas River Cruise leaves from the Canyon of the Eagles Lodge, on the east shore of Lake Buchanan, and part of the fun is getting there. Once you pick up FM 2341 off Texas 29 just west of Burnet, the final 14 miles of the drive wind through some of the Hill Country ‘s most ruggedly beautiful landscape while offering stunning views of the lake. Cruise-goers can view bald eagles in the winter, which proved an exhilarating experience when I did it years ago-but this time I’m a few months early for the eagles. In fact, our tour guide actually seems to be downplaying expectations in general, warning that recent droughts have changed the picture considerably: less vegetation and wildlife to see, and smaller waterfalls. But little compares with the soothing silence out in the middle of a large body of water, and this trip doesn’t disappoint. Sure, the water is low, but the egrets have come out in force, joined by an occasional green heron. Craggy stone canyon walls drop dramatically down to the water line at several points, and the falls sparkle in the afternoon sun.

On my last night in Marble Falls, Cindy and Hugh Vaughn take me to see Marcia Ball and her band rock The Uptown Marble Theater back on Main Street. Opened in 1942, the theater showed its last movie in 2003 before shutting down. Then Russell Buster, who’d already redeveloped several properties along Main, bought the theater and reinvented it as a live entertainment hall. The 280-seat room retains a lot of intimacy and sounds great. With her festive, second-line New Orleans R&B romps and her yearning ballads, Ball is a house favorite. And the Louisiana-bred, Austin-based singer-pianist left no doubt as to why, playing nearly three hours and leaving the crowd jubilant as we strolled out into a cool, clear Hill Country night.