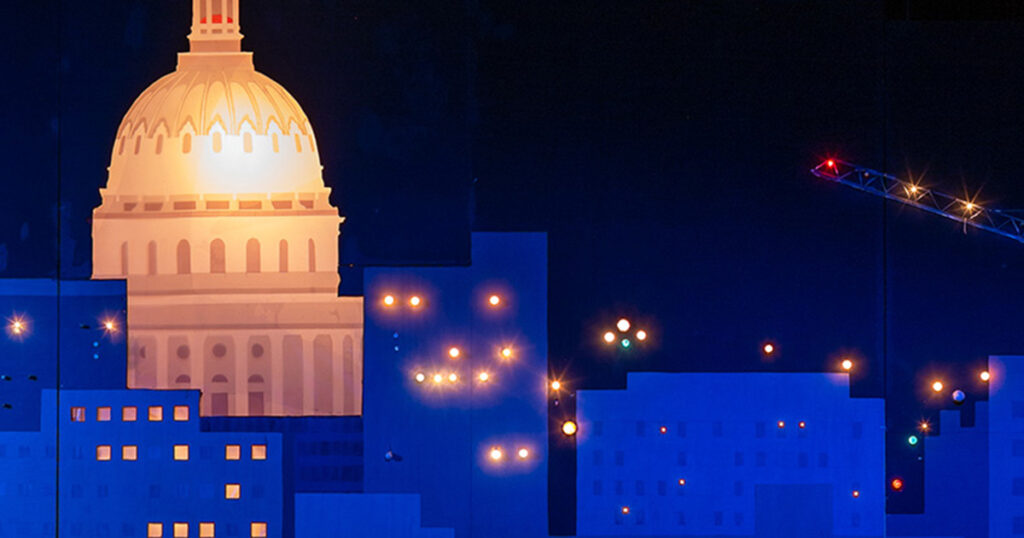 The word “iconic” gets thrown around way too much for my liking, but it does exist for good reasons. One would be to describe the original Austin City Limits stage backdrop. That would be the one that resided for almost 30 years in Studio 6A of Austin’s KLRU-TV, rendered by stage designer Augie Kymmel of a much-less-crowded Austin city skyline.

Has any visual creation done more to aid Austin’s status as the Live Music Capital of the World? Think about it: That skyline stood behind a parade of stars that would forever be associated with Austin, even if the show was just another tour stop. Texas legends like Guy Clark, Steve Earle, Emmylou Harris, Rodney Crowell, Townes Van Zandt, Norah Jones, Waylon Jennings, and Lucinda Williams have come to be known as “Austin musicians,” despite their stays in the city amounting to a couple of months at a stretch. No matter if they cut their teeth in Houston or Dallas or were based in Nashville or Los Angeles, they were branded forever as Austin’s own by that illuminated skyline.

Last week, that original backdrop reprised its role one final time before a crew dismantled it into its 20 constituent panels, which were then sold via an online auction, raising a total of nearly $270,000 earmarked into defraying the cost of an upcoming move for the KLRU studio. (Surprisingly, when the backdrop appeared for one final show, the artist invited to perform was Garth Brooks, the consummate Nashville success story and one man utterly immune to an Austin rebranding.)

As you might expect, panels containing landmark structures like the domed Texas State Capitol and the University of Texas Tower landed the biggest bids—$80,000 and $40,000 respectively—while a few that contained only the twinkling lights scattered about the skyline’s outskirts could be had for around $2,000 or even less. Sold individually mounted and pre-wired, the panels were ready for hang-up-plug-in-and-play usage by their new owners, none of whose names were released.

Unless you have, like me, borne the misfortune of a lengthy involuntary exile from Texas, it’s hard to understand the power of that backdrop coupled with those sounds and those musicians. Because I come from a music business family professionally and socially intertwined with many of the show’s guests, I’ve been watching Austin City Limits pretty much since I can remember. My memory and the show both extend back to 1974, the year Willie Nelson inaugurated the broadcast of the longest-running music show in American television history.

I was surprised to learn that the backdrop was added only in 1982, as I seemed to remember it being there long before that. That year, and the two that followed, were some of the roughest in my life. I was in junior high, for one thing—terrible for anyone. To make it worse, I was living in Nashville and longing for Texas. It wasn’t like I was a stranger down here—I spent much of each summer and all major holidays with my grandparents in Houston—but I wanted to live in Texas full time.

A rumor came and went that my dad, John Lomax III, was going to move us back to Austin, and I was crushed when it did not come to pass. I would look at the gatefold illustration in ZZ Top’s Tres Hombres album—a Tex-Mex feast from Houston’s, um, iconic Tex-Mex palace Leo’s—and heave a deep and longing sigh. And I could barely watch Austin City Limits because the downhome music, performed under the skyline of the city of my birth, was just too much for me to bear. Add in Gary P. Nunn’s “London Homesick Blues” and I would weep, literally, from longing to be home with the armadillo.

Praise be I moved in with my grandparents in 1984, and though I was in Houston and not Austin, I calmed down enough to be able to sit through whole episodes and hope one day to attend a taping. How wonderful it must be in that intimate amphitheater overlooking downtown Austin!

Or so I thought, and continued thinking for another 15-plus years before I finally made it to a taping.

It was November 1999, and at the time, Dad was co-managing rising Australian country-rock singer Kasey Chambers. It was her turn to take the venerable stage. Because the evening was kind of brisk, I made sure to wear a warm jacket. I grew puzzled, though, as my friend drove us not into the hills outside of town but toward the UT campus. I held my tongue as I picked up the front-seat conversation between my hosts that the show was made in a studio on the UT campus. I will confess to God and everybody that I was almost 30 and had seen dozens upon dozens of episodes and attended UT for an inglorious year before I realized that the Austin City Limits skyline was a studio set.

You’d think I might have noticed that by 2000, Austin’s skyline was just a little bit more cramped than it had been almost 20 years before. That never even crossed my mind, and I doubt it would even now that the city is looking more and more like Dubai with tacos.

I was relieved to find out I was not alone: In previewing the auction, the Austin American-Statesman’s Peter Blackstock said that many touring artists shared my surprise. Blackstock added that the set was fashioned out of “wood, wire, and Christmas lights” by Augie Kymmel, based on a photo taken from the St. Edward’s University campus in South Austin by longtime ACL photographer Scott Newton.

Last week, after COVID-19 delayed the auction for about a year, Garth Brooks sang the backdrop off into the sunset. It was a for-old-time’s-sake affair, since Austin City Limits departed the UT campus for downtown’s Moody Theater 10 years ago. Fittingly, native Texan Lyle Lovett performed at that sendoff.

Studio 6A, designated a Historic Rock and Roll Landmark by the Rock & Roll Hall of Fame in 2009, was relegated to spot duty after that, but now it’s being put out to pasture for good: KLRU is leaving the UT campus for new digs at Austin Community College’s Highland Campus later this year.

Austin City Limits continues taping at the Moody Theater in downtown Austin, with the schedule of tapings for its upcoming Season 47 continuing with Charley Crockett on July 28.