As new buildings rise, the former home of William Sydney Porter is among many historic sites with deep roots 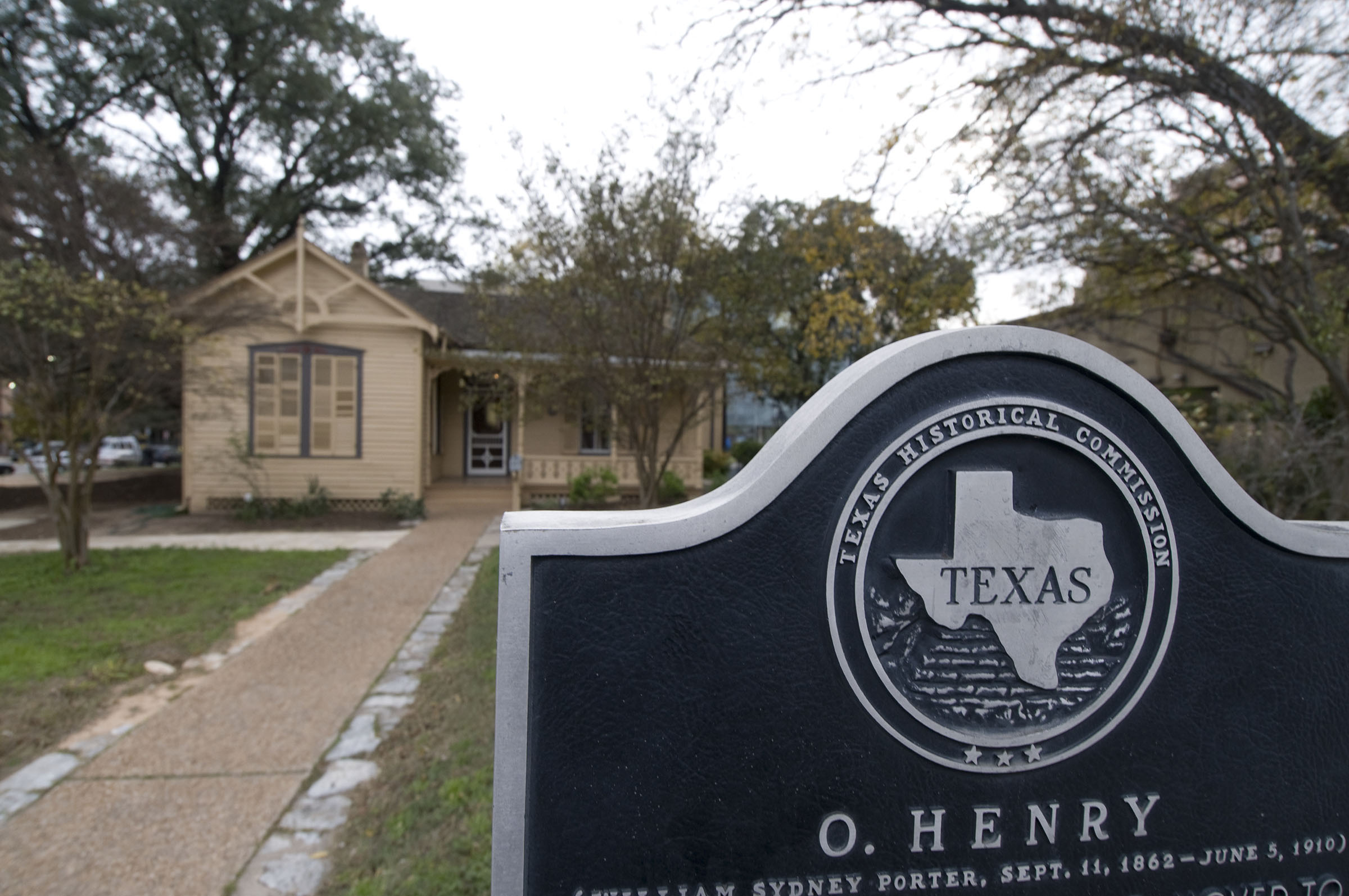 The O. Henry Museum, frame house where William and Athol Porter lived in Austin in the 1880s, is located in a historic part of downtown Austin. Photo by Michael Amador.

A squeaky front door welcomes visitors to the O. Henry Museum. It’s the kind of squeak that only a certain type of door can make—one that has witnessed history and welcomed thousands of visitors over the years.

Located in downtown Austin, the museum is the former home of William Sydney Porter, aka O. Henry, the turn-of-the-century writer famous for his short stories with twist endings, “Gift of the Magi” being perhaps his most famous. The small house, with a quaint front porch, is where Porter lived between the mid-1880s and mid-1890s. It’s also one of a handful of historic sites along a stretch of East Fifth Street that remain standing among the newly constructed high-rise buildings.

“It won’t go anywhere,” says Wendi Laws, the O. Henry Museum’s site manager. “It has to stay what it is, just because of the sheer amount of history that’s being preserved.”

This month, the museum reopened to the public after being closed for more than two years as it underwent a major restoration project. The project, which took longer than expected because of the pandemic, included removing lead paint, replacing sash cords to windows, updating gutters, re-enforcing support beams under the floors, and improving the fire safety and HVAC systems.

Outside, the project continues. The old steps and porch on the back of the house have been removed to make way for a large patio with modern lighting. The work is part of a redevelopment to make historic Brush Square, where the museum is located, a more inviting space for visitors and residents alike. Expected to be complete in the spring, the spruced-up square will have more seating among the large oak trees and more event-friendly grounds, especially for the museum’s annual O. Henry Pun-Off in May (though this year’s event on May 13 will take place at the Hilton Hotel across the street, where it has been held for the past few years).

Originally located on a nearby corner lot, the O. Henry house was moved to its current location in 1934. Its next-door neighbors are Central Fire Station No. 1 and the Susanna Dickinson Museum, the last home of Alamo survivor Susanna Dickinson. It, too, was moved from its original location where the Hilton now stands. The fire station, built in 1938, sits on the former site of one of the earliest fire stations in Austin. According to an Instagram post by the Austin Fire Museum, the current building “drew national attention in fire department trade magazines for its modern, art deco style.”

More history can be found across the street. The Art Moderne-style building that looks more suited for Miami than the capital city of Texas was a government building and a medical facility. A block over is a small limestone building that dates to the first days of the railroad in Austin. “That was the Old Depot Hotel,” Laws says. “That was where people would come in and stay when the train dropped them off.”

When Porter left his hometown of Greensboro, North Carolina, and arrived in Austin, the city had a new capitol building and the University of Texas had just opened. “Modern Austin was beginning to put itself together,” says longtime museum docent Grant Cross. “For people like him, Texas was seen as a place to try new things and start a new life.”

Cross describes Porter as the original Austin slacker. “He avoided working hard,” he says. “He was a guy who showed up on front porches at meal times at families that loved his conversation: ‘Oh really, it’s dinner time? I’d love to have a plate.’”

Porter did work. His list of jobs, mostly found for him by his stepfather-in-law, P.G. Roach, included working at a tobacco shop, drawing maps for the General Land Office, and bookkeeping at a real estate office. But when he started working as a teller at First National Bank, things changed. “That would be the job that sees him imprisoned for embezzlement,” Cross says. Porter served three years (1898-1901) in an Ohio penitentiary for the theft. 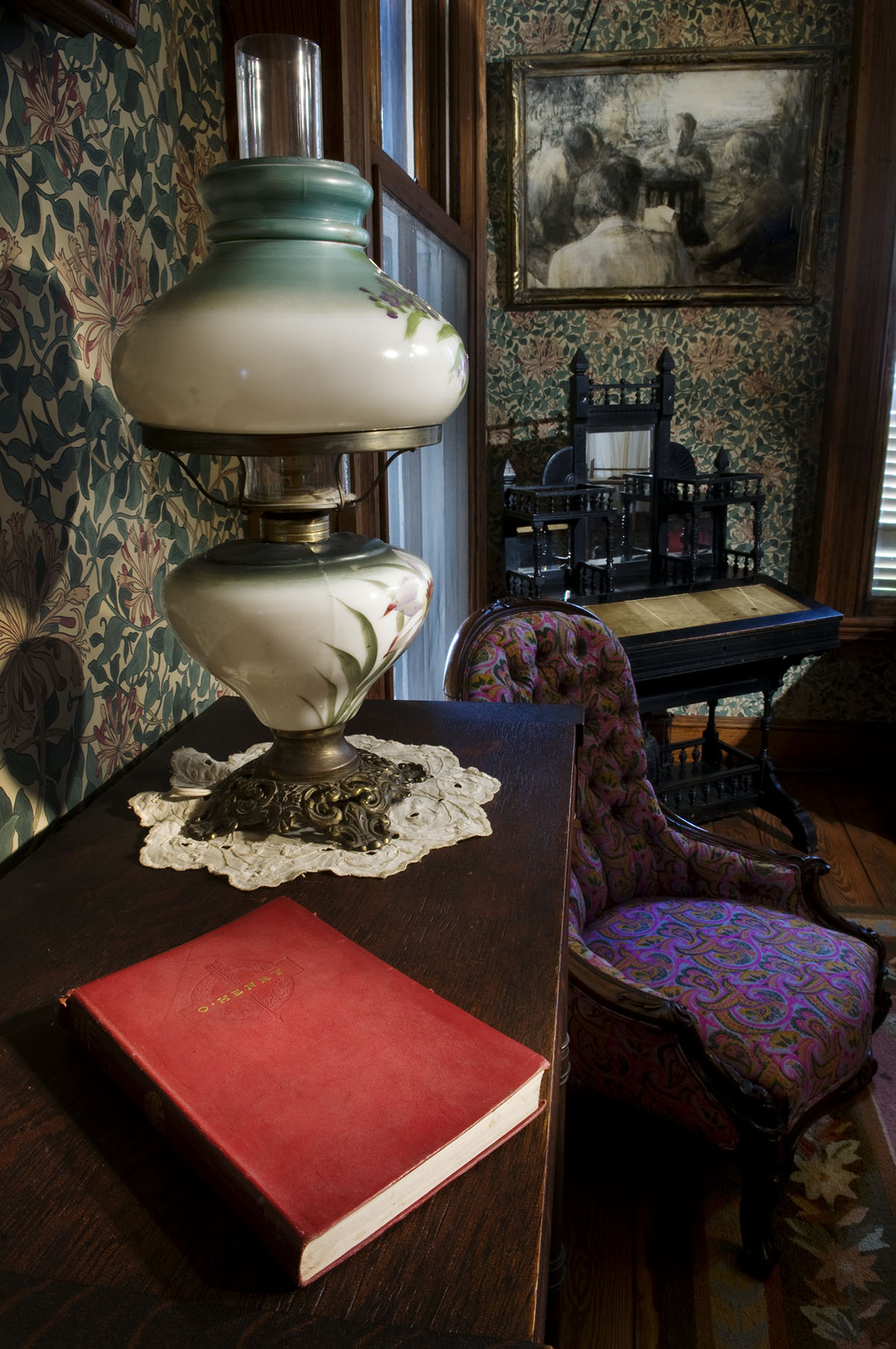 Old books with furniture at the O Henry House. Photo by Michael Amador.

Throughout the house are original pieces of furniture from when Porter, his wife Athol, and their daughter Margaret lived in it. The bedroom still has the bed where Athol died from “consumption,” the catchall term for tuberculosis and other airborne diseases of the day, which ended up taking the life of Margaret as well. There’s also the same ruffled skirt Athol is seen wearing in a black-and-white photograph placed on the vanity next to the skirt.

The parlor has old rocking chairs and a Horace Waters square piano with colorful mother-of-pearl inlay. Sheet music for a song written by Porter hangs on the wallpaper—not the original, but still a period-appropriate William Morris design. Set up on a table is a gramophone and a small framed black-and-white picture of Porter. Look closer and you’ll see the picture is actually an iPad. When activated, Porter’s mouth moves to recorded audio of his voice—although the museum is pretty sure that’s not his actual voice. “He never once said, ‘I’m William Sydney Porter, better known to you as O. Henry,’” Cross says, referring to what the voice says in the recording. “That was the opposite of he how conducted his personal life.”

Cross points out that when Porter served time in the penitentiary, he stopped being William Sydney Porter. He was already a writer at that point, having published The Rolling Stone newspaper, which Cross calls “a literary mixed bag, some satire, jokes, hot takes on local events.” Porter tried selling his stories while he was in prison. A room in the back has the mugshot of him as Prisoner No. 30664.

According to Cross, the museum receives one to two dozen visitors on an average day. “It fluctuates so much,” he says. “When the English teachers had a convention, we had 55 people in every hour.” A good amount are international visitors. Porter is popular in Russia, China, Japan, and South Korea, Cross says. The rest of the visitors tend to be “wanderers-by,” people dropping in to see what’s inside the little historic house.

When Porter got out of prison, he moved to New York and became O. Henry. His short stories, eventually numbering around 400, were published weekly in newspapers. Despite being a famous writer, a lot about O. Henry’s life in New York is unknown. In fact, a lot about O. Henry in general remains a mystery. For instance, we don’t know where the name O. Henry comes from. (“His quip, according to his colleagues, was O is the easiest letter of the alphabet to write,” Cross says.) Because he didn’t discuss his writing, we don’t know who inspired his stories. He was among the highest paid writers in New York, but “[w]here his money went will remain one of the enduring mysteries of his life,” Cross says.

In a room at the museum that’s been set up as the kitchen, you find an old stove and what is believed to be the last photograph taken of Porter. He’s leaning back in a chair, reading a newspaper with his eyes looking almost closed. “I love that he’s reading the shady side of the newspaper,” Cross says. “He looks very comfortable.”

With thinning hair and deep wrinkles, he looks a lot older than he probably was in the photo—years of heavy drinking took a toll on him, and he died at age 47 in 1910. According to Cross, he would go on to be republished in books and newsprint for the next 20 years, and there’s still a short story prize named for him.

The newly renovated museum looks just like it did before it closed for renovation. The work ensures that it remains standing as the city around it changes. And despite changing his name and escaping from his past, William Sydney Porter remains a part of Austin. Perhaps that’s a twist ending even he didn’t see coming.