A Family' Explorations Include Walking Through A 10-Foot-Tall Faux Building, Riding The Metro, And Touring Mission Control 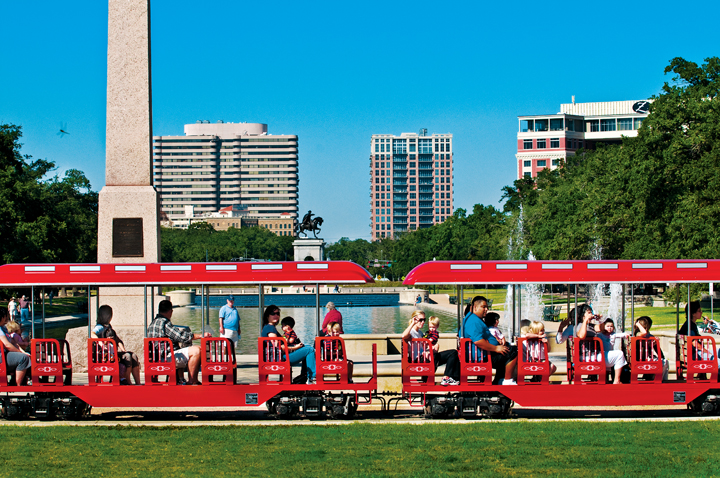 Covering more than 600 square miles, Houston is so large that it could hold New York City, Washington, D.C., San Francisco, Seattle, Minneapolis, and Miami simultaneously inside its boundaries. And with more than two million people, it ranks as the nation’s fourth most populous city. It’s also a port city, a medical city, a space city, and an oil city. Not only that, but it has an abundance of child-friendly attractions.

That’s why we chose Houston for our annual multigenerational Crider family weekend, when my son and his family join my husband and me in exploring an interesting destination, focusing on activities that enlighten both kids and adults.

“Looks like Dallas,” observed my seven-year-old grandson, Ryan, as he gazed up at the sleek skyscrapers along the 610 Loop. Granted, his personal big-city-skyline database is somewhat limited. One of the purposes of this trip was to show him and his 10-year-old brother, Garrett, that Houston offers very different diversions than Dallas and other Texas cities.

And Houston delivered. We gazed in awe through the window of an auditorium at Mission Control in the Johnson Space Center. We spent hours at Kidtropolis (a pretend kid city) and other exhibits at the Children’s Museum. We hesitantly petted brown stingrays at Kemah Boardwalk. We doubled over with laughter at “computer-aged” photos of ourselves at The Health Museum. We rode trains, launched rockets and planes, and boarded a Ferris wheel. Here are the highlights.

Houston has a terrific Museum District with more than a dozen offerings. Tops on our list, though: the Children’s Museum. In 2009, it doubled in size to 90,000 square feet, adding seven permanent exhibits. By summer, it had won the “best museum in Houston” accolade in Nickelodeon’s Parents Picks Awards.

When our family of six arrived at opening time, the three-story, indoor Power Play-a playscape where kids can crawl and climb from disc to disc- already resembled a beehive, so we visited this giant cage of activity first. Garrett and Ryan quickly took off their shoes and hopped in, dodging other kids’ hands and feet as they climbed from top to bottom and back again.

Around the corner, Kidtropolis, a pretend child-run city offered such attractions as a news station, city hall, bank, EMS, diner, grocer, and vet’s office. Garrett chose the news station, where he wrote a breaking story—”Giant Bug Eats Mayor”—on a computer and then switched to the broadcast media area to record a weather forecast.

The real weather for the day was hot, one reason the museum was jumping. “We’re from Seattle,” said Jennifer Antonia, visiting with Jake, 6, and Luke, 9. “It’s hot here. Kids want to be inside.”

A 16-foot-tall robot made of 600 old telephones caught our attention in the How Does It Work? area, along with an exhibit showing the mechanics of a bass guitar. My son Bart observed that the guitar exhibit, along with one on radio frequencies, seemed geared to older children, around age 12 or 13. But our group found plenty to do. At Invention Convention, we built rockets and planes, launching them in a 14-foot metal cage outfitted with bull’s eyes and meter markings. At this site, it was hard to tell who was having more fun—the kids or the adults. We lingered here, ignoring a dozen other hands-on activities from making jewelry to racing LEGO cars.

Outside, Flow Works bubbled with water, boats, buckets, and a crowd of happy little tykes. Wet fun for a hot day.

Behind the Children’s Museum stands The Health Museum, also known as the John P. McGovern Museum of Health & Medical Science. One of Trip Advisor’s top 2009 family-friendly picks, it stars as the country’s only interactive science center focusing on health, medicine, and life sciences.

Refreshingly uncrowded on the day we visited, the one-level building houses a 4-D theater and the Amazing Body Pavilion, with more than 60 interactive video and audio kiosks. In learning about the body, Ryan sat on a giant tooth, helped a skeleton pedal a bicycle, and walked through a 10-foot-tall faux brain, while I pulled and pulled a 27-foot rope that illustrates the length of an adult intestine.

At the Age-O-Matic machine, Garrett posed for a photo, and then pushed a button to see how his features would mature. “I look really weird at 70,” he said. “I want to see me at 16” Sorry, no 16, but you could push buttons for factors that affect appearance as we age: obesity, tanning, and smoking. We dissolved with laughter and also grimaced with horror at the results.

“I’m not going to smoke and get a lot of sun,” announced Garrett. Thank you, Health Museum.

We then strolled to the Challenge Gallery, where we tried activities that flexed both our physical and mental muscles, including a fascinating interactive game called “Mindball” in which two players try to move a ball with their brain waves. The more relaxed player controls the ball.

Houston’s 7.5-mile METRORail track includes a stop in the Museum District. Wanting to expose the kids to light-rail, we rode from the museum to Reliant Park, home of the rodeo and NFL games. The ride took us past scenic Hermann Park, several of the city’s famous hospitals, and the zoo. We found the trains fast, clean, and frequent.

The drive to Kemah reminded us that Texas remains a big oil state. As we passed refineries and storage tanks en route to Kemah, the stately pines and colonial homes of Houston gave way to palm trees and houses on stilts. We soon spotted a Ferris wheel and a roller coaster, signs that the boardwalk, located along the channel that connects Clear Lake with Galveston Bay, had to be close.

Developed by Landry’s Restaurants corporation in 1997, Kemah Boardwalk has been named one of the 10 best boardwalks in the country by the Forbes Traveler Web site. Its well-kept 40 acres include a dozen or so rides, arcades, souvenir/candy shops, and 11 eateries—several with waterfront views.

“A nice mix of family-friendly restaurants,” commented my daughter-in-law Kim. We noted that the sushi restaurant had a kid’s menu that included PBJ rolls.

A red mini train circled the boardwalk, and provided a nice tour, complete with tunnels that encouraged loud yelling from the kids on board. Ryan and I joined right in. The Ferris wheel was a first-time experience for both grandsons and, from the top, offered a good view of the boardwalk and waterfront. The Stingray Reef offered a chance to feed and pet the strange-looking sea creatures. Garrett was hot to do this until the stingrays began jumping up the sides of the tank to eat the little fish tucked between his knuckles. Finally, he and I found the courage to touch their velvety brown skin.

Considered by many the top Houston tourist attraction, the Space Center lies in the NASA/Clear Lake area, about 25 miles from downtown Houston or 10 minutes from Kemah Boardwalk. It’s the official visitor’s center for NASA’s Johnson Space Center, home of astronaut training and Mission Control.

To reduce waiting in line, we arrived at opening time with tickets in hand ($82.20 for the six of us, discounted 25 percent online). Board the NASA trams first before they fill up, we had been advised. Tram excursions offered a choice of three different destinations: Mission Control, the astronaut-training facility, and the neutral-buoyancy laboratory. Plus, each tram went to the Saturn V rocket facility. We opted for the blue, four-car, covered tram to Mission Control.

As we rode through the Johnson Space Center, we listened to a recording that gave a synopsis of the space program’s history and pointed out buildings of interest. At Building 30, we sat in an auditorium and looked through a large window at Shuttle Mission Control, one of several control rooms in the facility. We could see U.S. astronauts in the space station talking on what looked like a giant TV and a large map showing the location of the station above the earth, as well as rows of consoles used to control various aspects of the mission.

”We tell the astronauts when to wake up, when to exercise, when to go to bed,” said a guide. He recounted with pride and passion the various missions, not only successes but also the failures when astronauts were lost, during the Apollo 1, Challenger, and Columbia missions. ”We still consider them to be on mission,” he said. Later, we saw the Memorial Tree Grove, a group of 40 trees outside the Johnson Space Center, most of them planted in memory of deceased astronauts.

The tram also stopped at the Saturn V, the world’s largest and most powerful rocket, which took the first man to the moon in 1969. Longer than a football field, it was exhibited on its side in a hangar so visitors could view its various sections.

“See that black ring? That’s the Instrument Unit. I helped work on that;’ said my husband, Chester. His stories about his experience in the ’60s as a rookie IBM engineer based in Huntsville, Alabama, the home of NASA’s Marshall Space Flight Center, helped make the tour very personal to our grandsons.

Back at the Space Center, we toured a mock-up shuttle, pulling out drawers and viewing their space-secured contents (freeze-dried mac ‘n cheese, strawberries, spinach, floss) and gawking at a space toilet with levers and hoses. Garrett weighed himself on Earth, Neptune, Jupiter, and Mars (he was lightest on Mars).

While the adults visited the astronaut gallery, which offers a collection of spacesuits and photos of every United States astronaut who has flown in space, Ryan climbed and threw balls in the five-story Kids Space Place, an enclosed playscape that seemed to be one of the most popular features at the center. Then we refueled on pizza, wraps,  grilled cheese sandwiches, and salad at the Zero-G Diner, a massive, food-court style restaurant.

Afterwards, the boys decided that Houston is not like Dallas. It has its own identity. “Those oil things;’ said Garrett. “And rockets,” said Ryan. As for the adults, we found a Houston we had never seen on our grown-up visits.