In San Angelo, A Celebration Remembers the Mysterious ‘Lady in Blue,’ Who Evangelized to Jumanos

Though she lived in Spain, the nun appeared as a vision—the Lady in Blue—to evangelize to the Jumano Indians

Written by Matt Joyce | Updated: May 24, 2019 | Filed Under: CultureHistoryTravel News 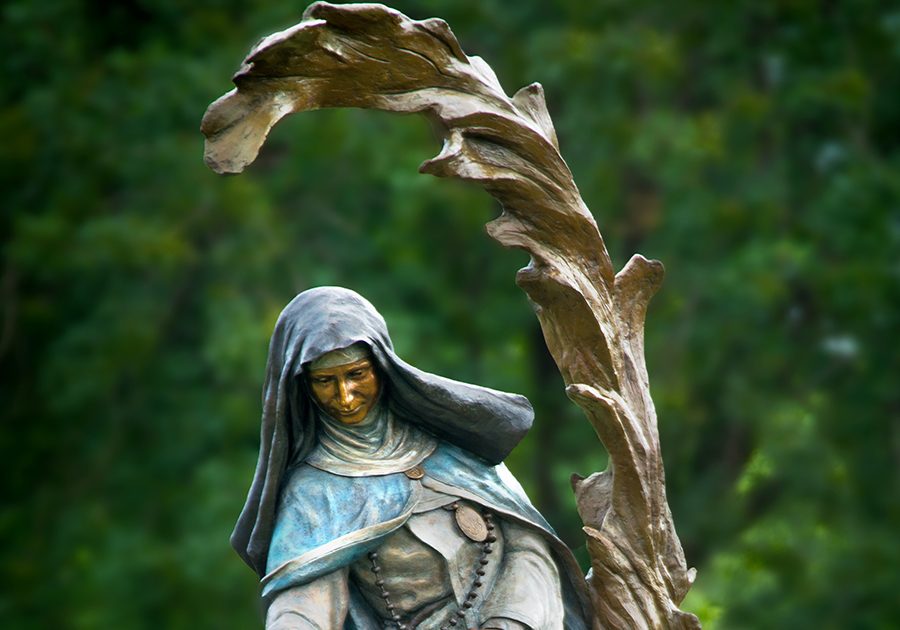 The young Franciscan nun in the cobalt-colored cloak was, quite literally, a vision in blue to the Jumano Indians of the Desert Southwest. Though she never left her convent 5,000 miles away in Spain, Sor Maria de Jesus de Agreda mysteriously appeared before the indigenous people of what is now the San Angelo area, delivering an evangelistic message. They called her the “Lady in Blue.”

More than 460 years later, the legend of the Lady in Blue—who is said to have taught Christian tenets through a phenomenon called “bilocation”—endures in San Angelo. A trio of gleaming bronze statues on the Concho River mark the site of Texas’ first baptisms in the mid-1620s, and plaques on Rio Concho Drive pay tribute to the Franciscan priests who visited to perform those baptisms. A documentary, The Needle and the Thread, four years in the making and partially filmed in San Angelo, premiered to local audiences in April; and festivities are held each spring to commemorate Maria’s death.

This year’s annual celebration—a mass will be at 12:10 p.m. May 24 at Cathedral Church of the Sacred Heart—coincides with a visit by 38 people, many of them from San Angelo, to Vatican City in Rome to present The Needle and the Thread. The documentary describes Maria’s mystical journeys to the Southwest, where she ministered to its natives without the constraints of language or logistics.

“The plan is to hopefully give the documentary to Pope Francis” for viewing as he considers beatifying Maria, says Tilly Chandler, a member of the group visiting Europe, and chair of the Historic Beginnings of San Angelo/Lady in Blue Committee, which works to  spread the Lady in Blue story.

As evidence for the Lady in Blue’s mysterious appearance in the New World, her supporters point to original letters that Franciscans penned about the Jumanos’ walking to Isleta, New Mexico, in the mid-1620s to locate priests they said Maria promised would be there.

“They arrived carrying Christian crosses,” Chandler says. “They arrived knowing the tenants of the Christian faith and said a beautiful lady in blue had taught them and told them to bring Franciscans back to the Concho River to baptize their people.”

Chandler believes beatification or canonization would stoke the flames of an ancient story that is equal parts mysticism and history. Her group is pushing the documentary for wider release and has received interest from cable companies.

For Chandler, her belief in an incredible story is just as steadfast as her faith that, at 82, she’ll see the day when Maria is named a saint.

“We have worked diligently and joyfully for 10 years, and I mean sweat, blood and tears, because we believe she deserves beyond a shadow of a doubt to be canonized,” Chandler says. “We pray we will see it happen.”