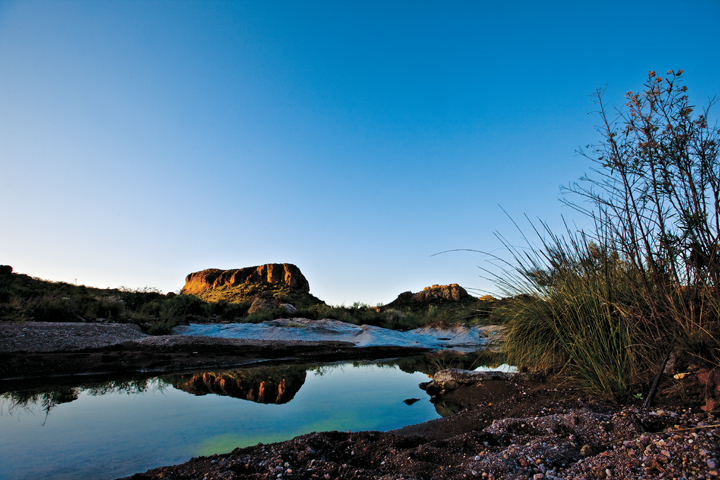 The night skies of Texas’ Big Bend country often mesmerize in ways that mirror the peculiarities of dark dreams and lullabies. Here, above the crest and trough of a mountain horizon, nighttime skies are at their most dramatic, offering rare glimpses of moons and comets and galaxies in full spectrum or eclipsed in orbit shadow. In the late hours especially, far beyond midnight, the West Texas skies seem to delight in the unraveling of the firmament. Perhaps it is because the routine touchstones—Orion, the Pleiades, Sirius, and the Dippers—are now hanging askew, reassigned to unfamiliar bearings, or are hurtling toward the horizon to become something else entirely. Or maybe it is the mischievous temperament of the sky itself, aware that the few who glance up and into the deepest late night are bleary-eyed and farthest from doubt. These moments, made manifest before the unwitting, provide the wily universe a chance to perform atmospherics unlike those that ever inhabit consciousness. Beyond mere spectacles that occur once each year or in a lifetime or even a millennium, these nightly pageants are proof of the mythic fires in the sky, highlighting a short list of events that have yet to feel the compromise of a man-made world.

Texans who wish to corroborate this galactic exposition may want to pack a tent, a water supply, and some late-night snacks and make their way to Big Bend Ranch State Park, where skies are darkest and city lights—along with city burdens—dwindle until they blink, snuffed like an Advent candle flame, ceremoniously out. The park, located in perhaps the most secluded sector of the state’s boot heel, was once as challenging to navigate as an uncharted sea. But park planners and staff have spent the last year bushwhacking across this vast, desert paradise to provide Texans access to some of its most remote vistas and hidden pleasures. And now, unlike in its roughshod-run past, Big Bend Ranch State Park is entirely open for business. Drive, hike, bike, or pack in to trailheads, overlooks, historic and prehistoric ruins, and primitive campsites, all scattershot across the state park system’s grandest cultural and natural treasure. But don’t make the effort for the nighttime theatrics only. Daylight is good light as well, illuminating the many hidden canyons, wind-riven hoodoos, and ephemeral springs, all of them tucked into a calamitous pile-up of sierras—the Bofecillos, a volcanic range contorted like a beached armada, wrecked but also transformed.

There is calm and serenity to be had here, too. Early morning is a favorite time to hike across the terrain and down into Rancherias or Leyva, Fresno or Mexicanos, Oso or Auras; canyons that plunge the trekker into the circuitry of Chihuahuan Desert life where, over the course of the last century, very little has changed.

” …I remember that one of the things that we always looked forward to was that about once a month we would go over to Madera Falls,” recalls Celia Anne Hill, daughter of one of the Anglo pioneers who settled Big Bend Ranch country in the early 1900s. “Mama would fry chicken and pack it up in Mrs. Tucker lard buckets. Everybody carried a bucket or package of something, and we’d take a lunch, and spend all day at Madera Falls …. Oh, it was gorgeous.”

Gorgeous would be an apt description for one of the park’s new primitive campsites—Chorro Vista-where campers will find an informal trailhead that leads to a superb overlook above a deep and inaccessible canyon and its Madera (now known as Madrid) Falls. Trekkers should keep in mind that the  designation “falls” is an optimistic term for the trickle and drip typically found at all the park’s pour-offs. But the attendant landscape is stunning  nonetheless.

Today’s visitors can also fill an afternoon or an entire day hiking many of the park’s canyons on established, well-marked trails accessed either from FM 170, the park’s southern border, or Sauceda Ranger Station in the park’s interior. Closed Canyon Trail, one of the easiest trailheads to reach, affords a fun, kid-friendly squeeze through a dramatic canyon passageway. The slim canyon provides a shady trek between bold volcanic walls before depositing
hikers above a dry pour-off hovering over the Rio Grande. The hike is less than two miles round-trip, and visitors may park just off FM 170 at the trailhead, where a ramada-shaded picnic table offers respite after the hike.

Folks who wish to tackle a full-day canyon hike but can’t make the drive to the park interior can start at the Rancherias East Trailhead along FM 170 and spend the day following Rancherias Canyon to its first major pour-off, where it drains the upper reaches of the Bofecillos. This 10-mile round-tripper is definitely for the fit and prepared, but the rewards are plenty. Hikers should keep an eye out for any birds that hug the cool shadows of the cliffs along this riparian way—the black-chinned hummingbirds, summer tanagers, the wrens—gathered by the promise of seeps, vernal pools, and the up-ground flow of living, purling springs. The night cools the canyon’s stones that once hurled molten through the air; spinning slag that landed like cluster bombs a million years ago, hitting the ground hard or slapped into wet mud or puffs of ash, buried, buried more, heaved to the surface, then burnished end over end in flash water.

Visitors who make their way into the interior of Big Bend Ranch State Park, along a 29-mile unpaved drive from the turn-off along FM 170 eight miles east of Presidio, will find the Sauceda Ranger Station and the Sauceda Ranch Headquarters, a historic collection of adobe buildings, corrals, barns, and a bunkhouse occupied for almost a century by cowboys. Sauceda is part of the park’s cultural wealth, with a long history of ranching and roundups. In fact, historic and prehistoric sites can be seen throughout the park, including collapsing adobes, dry-stack walls and fences, remnants of early mining activity, and rock art. Along the hillsides and above many of the park’s canyon floors, stone ruins lie collapsing in hand-hewn heaps made by men who forged headway into the heart of the land. Along one nameless canyon, beneath palisades of igneous dross, lie three mounds of rock, graven side by side. Tasajillo branches poke through the stones like finger bones.

Sauceda is also the jumping-off point for many of the park’s rugged all-day and overnight adventures. Be prepared to hike, backpack, ride horseback, mountain bike, or drive a high-clearance vehicle to gain access to many of the new primitive campsites and trailheads in the park’s interior. To date, a total of 55 vehicle-accessible campsites are available, and miles of primitive trails lie within reach of designated trail heads. Some of them, trekkers should note, require a four-wheel-drive vehicle to reach.

Big Bend Ranch State Park visitors-be aware! Extreme heat is common in this desert environment. Storm clouds are, too, triggered by moisture churning up the Rio Grande corridor or steamrolling across the northwestern high country, heaving rain onto the peaks and into the arroyos. The heat burdens the breath, boiling the afternoon temperatures and igniting monsoons. By midnight the air is in a final collapse, making sleep a welcomed retreat before  thunder commands the conscious to follow the pinprick strikes of lightning now along the ridge tops, now in the canyon, and now upon the riverbed, counting  one thousand four, one thousand three, one thousand two, one thousand boom!

“I can remember horrendous thunder and lightning storms,” Willeen Smith Austin (Celia’s sister) recalls, “and hail, and heavy, heavy rains when we would
be in the back of the pick-up truck coming back from Alpine down to the ranch.” The Smiths lived along Fresno Canyon, a wide arroyo that drains the western edge of the park’s enormous volcanic formation known as the Solitario. The remains of Willeen’s and Celia’s family ranch compound can be seen from the park’s Smith House Overlook, a short hike from the interior’s Mexicano Falls Trailhead. Reaching the trailhead requires a high-clearance, four-wheel-drive vehicle and takes an hour or more to drive the rugged road from Sauceda Ranger Station.

There is an intrinsic mystery about the way thunderstorms pass, just as in the way the stars jockey for position along a Big Bend horizon. These natural events signal the underwriting of a larger world, and are at once invigorating and frightful, comforting in their familiarity yet never losing their power to astonish, always revealing the chaos within while never quite fully relinquishing their mysteries. To enter the wilderness realm of Big Bend Ranch State
Park means to step beyond a comfort zone and attempt to decipher the enigma that is our natural world. But in the final analysis, it isn’t really the answers that satisfy. It is, instead, the contentment that comes while observing them unfold.

Big Bend Ranch State Park encompasses most of the landscape between the small border towns of Lajitas and Presidio along FM 170 (the two-lane highway that follows the Rio Grande) and northward to Tascotol Mesa-more than 300,000 acres.

Visitors should stop at Fort Leaton State Historic Site in Presidio if coming in from the west or the Barton Warnock Center in Lajitas if coming from the east for permits and fee information. The interior of the park can be accessed via Casa Piedra Road off of FM 170.

A comprehensive map of the entire park park and its many campsites, trailheads, and 2- and 4-wheeldrive roads can be found on the park’s Web site and in the quarterly publication El Solitario, distributed free at the park, online, and at many Big Bend region locations. Note: Visitors who wish to access the river campsites along FM 170 should check with the park’s Web site first for the latest information—many were damaged by recent flooding.

Those who only have a day to spend should stick to the trails and day-use areas along FM 170. Noncampers planning on staying several days within the park’s interior might want to consider the lodging available bunkhouse-style or in the “Big House,” both at Sauceda Ranger Station. Meals for lodgers at Sauceda are also available with advance reservations. A paved airstrip is available for fly-ins.