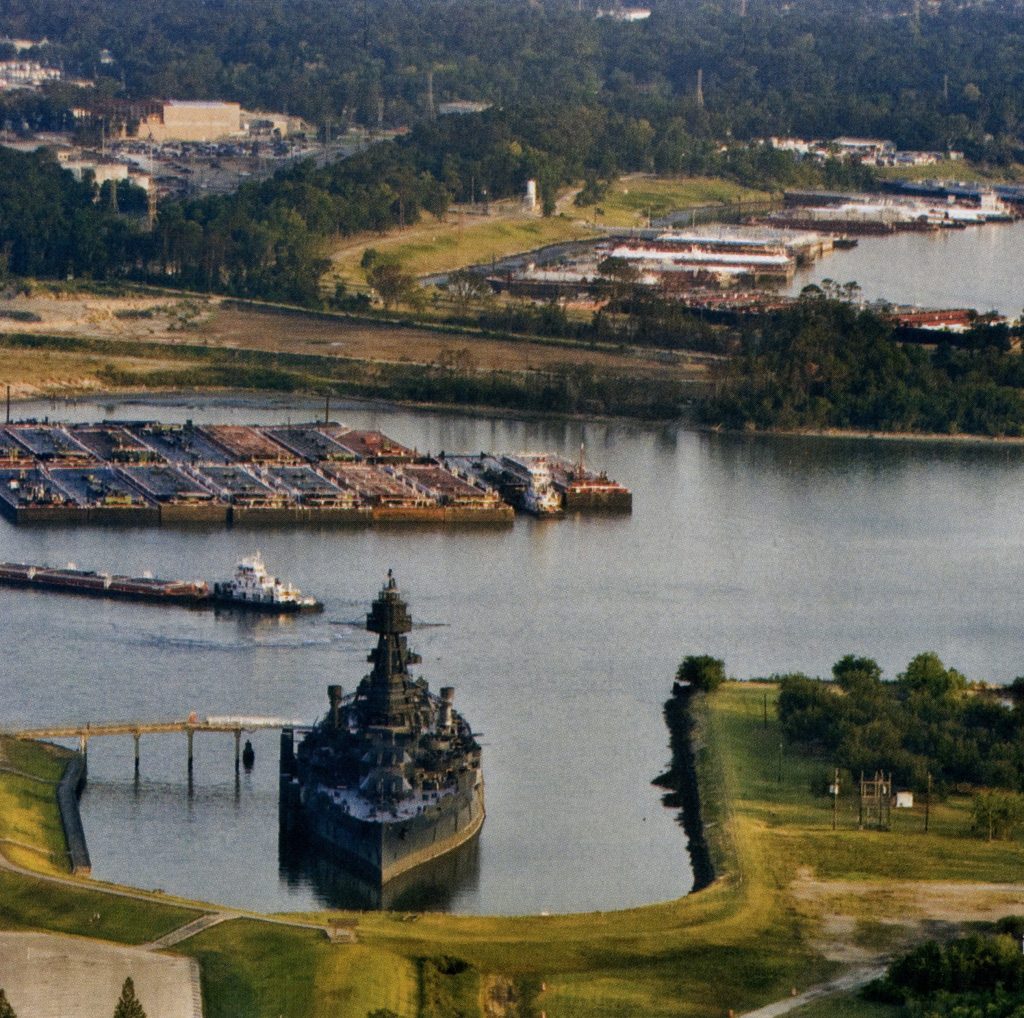 A bow-on perspective of Battleship Texas, as seen from the San Jacinto Monument, includes the surrounding San Jacinto Battleground and the Houston Ship Channel. Photo by J. Griffis Smith.

Driving down Independence Parkway to the La Porte home of Battleship Texas, it’s hard to believe that maritime and Texas history await discovery right around the bend, at the San Jacinto Battleground. After all, this is a heavily industrial area near the Houston Ship Channel, where billboards hawk companies that serve “all of your rotating equipment needs,” tall spaghetti piles of metal piping support petrochemical companies, and natural gas flames dot the horizon.

Nevertheless, the Battleship Texas floats quietly in her permanent berth in the waters of Buffalo Bayou, adjacent to the Texian Army camp portion of the San Jacinto Battleground. She’s still and calm—it is easy to forget that this is a vessel accustomed to movement—until a little wave causes the ship to rub against her moorings with an eerie, scraping “squeeeech” sound. Smartly turned out in dark blue paint—Camouflage Measure 21—this is how she looked while at war in the Pacific in 1945. Visitors walk the footpaths in the park setting that surrounds her; a few sit quietly on benches and admire her angular lines, hulking guns, and the thick armament that protected her hull through so many conflicts.

Launched in May 1912, just one month after the Titanic sank, Texas is the last surviving dreadnought-type battleship from an era when big guns and triple-expansion reciprocating engines were some of the newest innovations in naval technology. Those features, plus further technological advances (and maybe a little luck), kept the ship fighting through both World War I and II.

The ship opens daily for self-guided tours led by Texas Parks and Wildlife staff and volunteers who combine a love of maritime storytelling and a wealth of detailed naval knowledge. Ship restoration expert and volunteer tour guide Don Fischer notes that Battleship Texas is a treasured museum piece: “She is an intriguing artifact that reaches back to the very beginnings of the 20th Century both in design and structure … technology, techniques and tactics [in] aviation, gunnery, navigation … you name it, USS Texas was involved in it;’ he says. This is history that you can walk right up and touch. Fischer adds, “She is now the only representative sample from that entire era left in the world.”

Men shivered on this ship while supporting World War I mine-laying operations against the German High Seas Fleet in chilly Scapa Flow near Scotland. In WWII, men sweated and heaved ammunition to feed the guns that pounded Omaha Beach before the Normandy landing, and men stood on these decks and watched the U.S. flag rise over Iwo Jima’s fiercely-contested Mount Suribachi in the Pacific.

If any ship can sing the Johnny Cash song “I’ve Been Everywhere,” it is Texas.

Before wandering the decks, I stopped by the gift shop and picked up a helpful self-guided tour booklet. It took me through the public spaces in a roughly counterclockwise path, and filled in details and background to clarify what I was seeing.

The battleship is at once very similar and also very different from the modern ships of my own 23 years of U.S. Navy service. There is a slightly shrunken feeling to many of the passageways, hatches, and crew berthing compartments; space was needed within the ship’s hull for equipment to go to war, thus, creature comforts were not a priority.

I walked all around, looking at the variety of topside armament and equipment, including the giant, 14-inch guns. On the bow of the ship, I stayed well clear of the massive anchor chains that hold the two 20,000-pound anchors; many years of Navy safety training are hard to forget. We were taught to never step over the chains in case they suddenly “ran away” and took one of us with them down the hawsepipe.

A peek into the navigation bridge shows where Texas was steered through the Atlantic and Pacific oceans; there is a nautical chart of the English Channel, and the replica of a large, brass helm gleams. While in action at Cherbourg, a shell burst just below the bridge and killed the helmsman who steered this venerable vessel—the unfortunate gentleman was the sole wartime fatality aboard Texas, which is why she had a reputation as a “lucky ship!”

Some of the most compelling spaces are the ones that show the sailors’ daily lives. I paused by the topside galley (kitchen) on the main deck, with plenty of windows propped open to provide ventilation for the cooks who prepared meals three times a day for more than 1,000 enlisted crew members. The ship’s bakery and butcher shop are nearby; can you imagine sailors cutting meat and pounding mounds of dough in such cramped spaces, while the deck (floor) moved beneath?

I stepped down the steep, narrow, metal ladders to go below deck. A typewriter stands ready for a sheet of paper in an administrative office. Clothing and sheets are piled in the ship’s laundry. The ship’s tidy dental office appears to be ready for tooth repair at a moment’s notice. Everywhere I looked were places for someone to sleep—not just the standard crew berthing compartments but also foldup racks (beds) out in the passageways. Not much privacy anywhere, that’s for sure. If there’s any doubt about that, take a look at one of the crew bathrooms (heads) to see the open row of shipboard toilets. There’s even a small movie locker where reels of film were stacked and stored; Texas was the first U.S. ship to show a “talkie” movie—in 1930.

The ship speaks to visitors because she represents the wartime service of so many Texans. Volunteer John Stock says, “I got involved because my Dad was in World War II, and this ship went to some of the places that he went to in the Pacific. This is that symbol of the grandfather, the father, the uncles, and the brothers who were in World War IL I’ve met so many people on my public tours who, when I talk about Normandy, say, ‘My grandfather was at Normandy, my grandfather was at Omaha Beach. He may be here today because Texas was also at Omaha Beach … “‘