Jonny Rhodes on Closing Indigo and His Plans for the Future 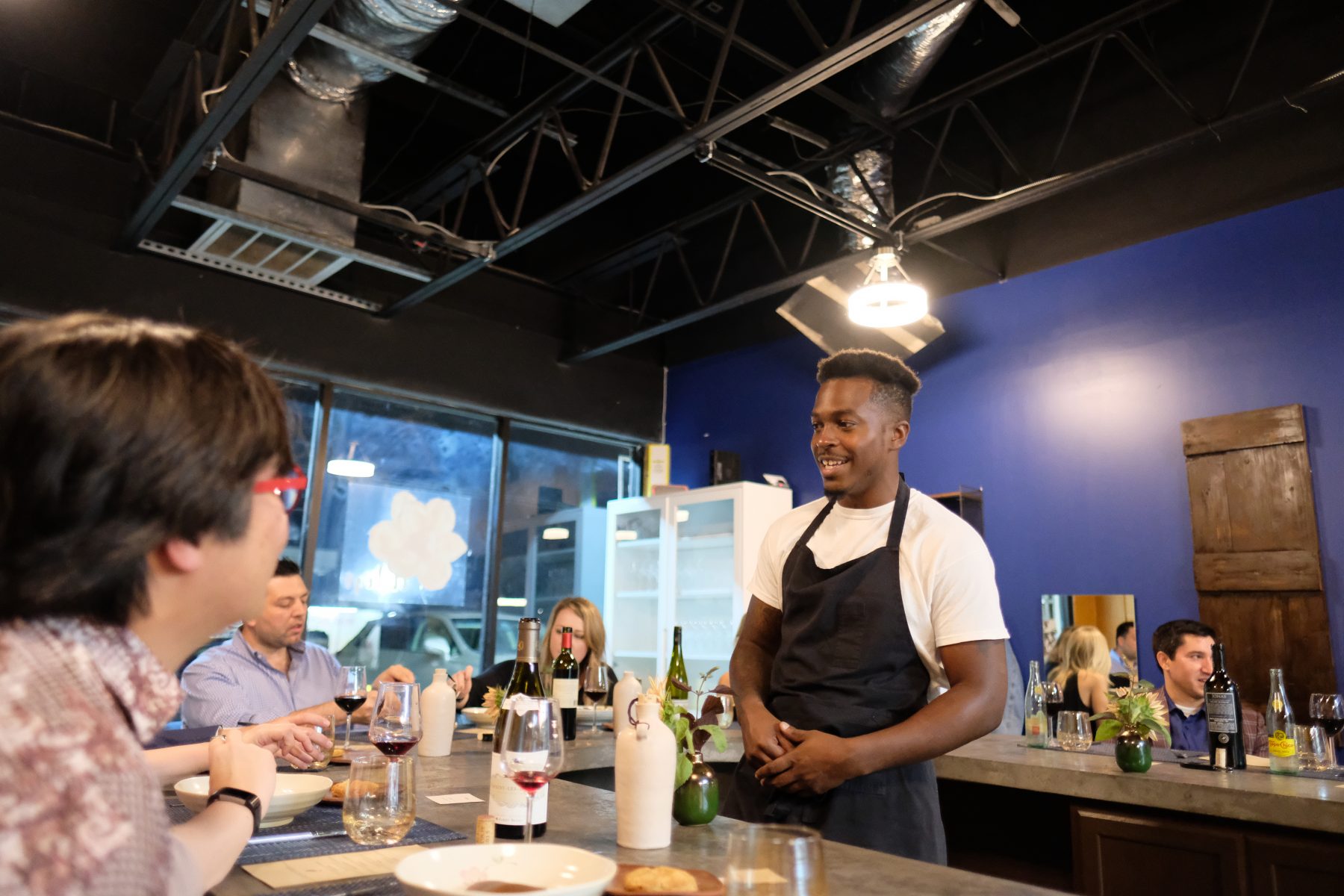 Jonny Rhodes chats with customers at Indigo in Houston. Photo by Mai Pham.

In June 2020, Texas Highways profiled chef and restauranteur Jonny Rhodes of Indigo in Houston. Shortly after the story was published, Rhodes announced on Instagram he would close Indigo for good after one more year of service. For many fans and customers, the news came as shock. The 13-seat tasting-menu restaurant focused on neo-soul cuisine received many accolades in its two years, including recognition from Time as one of the World’s 100 Greatest Places of 2019.

However, when the COVID-19 pandemic shut down restaurants in Texas in March, Rhodes temporarily closed Indigo to launch Broham Fine Soul Food & Groceries. Indigo’s space transformed into a market selling fresh produce and specialty items in the neighborhood Rhodes has recognized as a food desert.

According to Rhodes, he’s stepping away from the restaurant industry to focus on more meaningful long-term efforts, including further developing Broham and controlling its supply chain with his own Food Fight Farms.

Indigo will reopen on July 23 and close on July 24, 2021, giving diners nearly 365 days of chances to taste Rhodes’ remarkable dishes.

We caught up with the chef to see how he made this decision and what he has planned for the future.

Your restaurant has gained lots critical acclaim—one could say that you’re at the highest of heights. Why decide to close now?

Indigo is great. It brings awareness, but it doesn’t solve any issues. And Broham does solve those issues. And so does the farm. I don’t think people really appreciate me talking about the issues enough for them to get up and go do something about it. I don’t want to be a talk show host about life. I want to actively solve our issues.

What factors contributed to your decision?

One of the biggest points for wanting to no longer doing Indigo is that American consumerism is extremely toxic.

I have people asking me and saying very derogatory and rude things in my restaurant setting, and I have to maintain myself a certain way. People ask me things about my children. I had somebody in the middle of dinner service say, “Oh, I saw that you served in the Marines. How many people have you killed?” For someone to ask me that in the middle of the dining room filled with people—at all—is completely outrageous.

People can go leave one-star reviews on your business without ever having been there. Consumers walk into places and treat waitstaff and other people in the hospitality industry as if you’re not human too. And I have so many examples of things like that happening or taking place, where people feel like because they’re paying a certain amount of money, they can treat you [a certain way], or talk to you, or have access to you.

And that’s not the kind of person that I am. I am more introverted than I am anything else, but because of what I do, I have to come out and talk to people and deal with people. The wear and tear on everything from all the success is not something that I anticipated or something that I want. 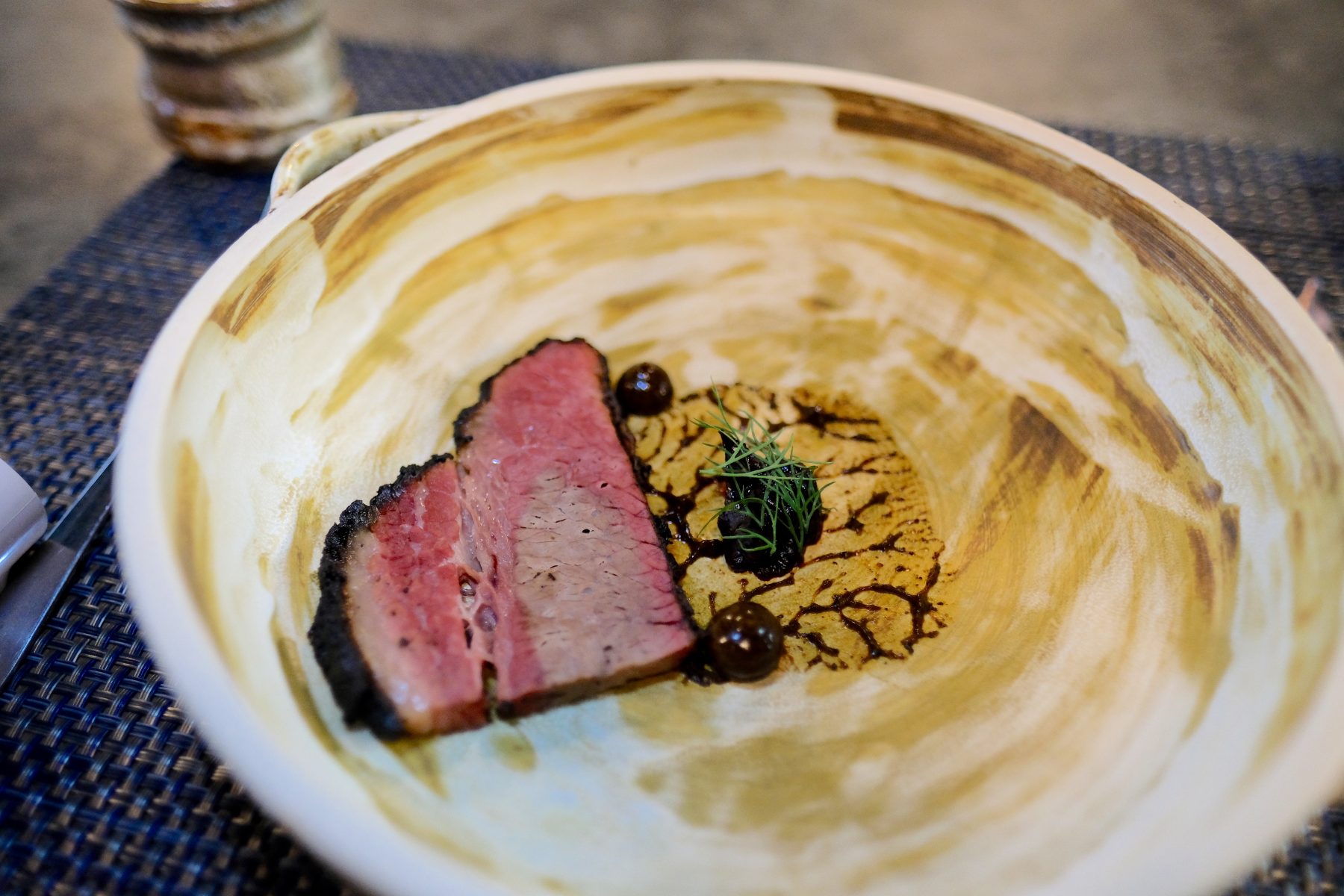 In his dish “Assimilation Is Not Freedom,” Rhodes juxtaposes a piece of smoked, aged Italian pastrami with Carolina heritage brown mustard to address how different races are portrayed in popular culture. Photo by Mai Pham.

I still owe a commitment to my staff. We closed unexpectedly because of COVID-19. When we closed, I felt like I was just starting to figure out the best way to run the restaurant, the best way to cook all the food. We were coming of age as a restaurant. All of us worked really, really hard to come of age. My staff and myself deserve that closure, to give ourselves that final year of being as good as we know that we are. And COVID was something that derailed that, but it didn’t derail our drive to be that Black version of Noma, or Stone Hill Barn, or the French Laundry, and all these other places that are considered to be on such a high pedestal.

Even when you were just starting Indigo, you talked about your plans for serving your community. Can you expand on that plan and how your grocery store and farm fit into it?

I had always told people when we first opened Indigo that Indigo was going to be a stepping stone. So before Indigo was even done being built on the inside, we had already finished the garden on the outside. But many people didn’t notice that because they were so focused on the restaurant.

As you look at the situation for Black people in the United States, we’ve always been treated like tenants. When you look at supporting Black-owned businesses, the businesses may be Black-owned, but the building in which they operate in is leased. It’s so hard for us to acquire land. It’s so hard for us to acquire ownership of natural resources. And something that meant a lot to me was having ownership. I wanted to be able to grow everything ourselves and control the supply chain. We grow it, we package it, and we sell it ourselves. There’s no interference in anything that we’re doing. I have had a farmer working with me since well before this all happened. We’ve spent the last two years working on soil recipes for the farm. Down the line, we also plan on having educational camps for the kids.

What will your future will look like after Indigo?

We’re constantly looking to grow our grocery store. I’ll be 30 in October. My plan is, by 40, to have 1,000 acres of land, and, by 35, have at least 25 Broham Fine Soul Food & Groceries in all of our different communities, not just in Houston.