At Indigo, every dish comes with a story and a strong vision 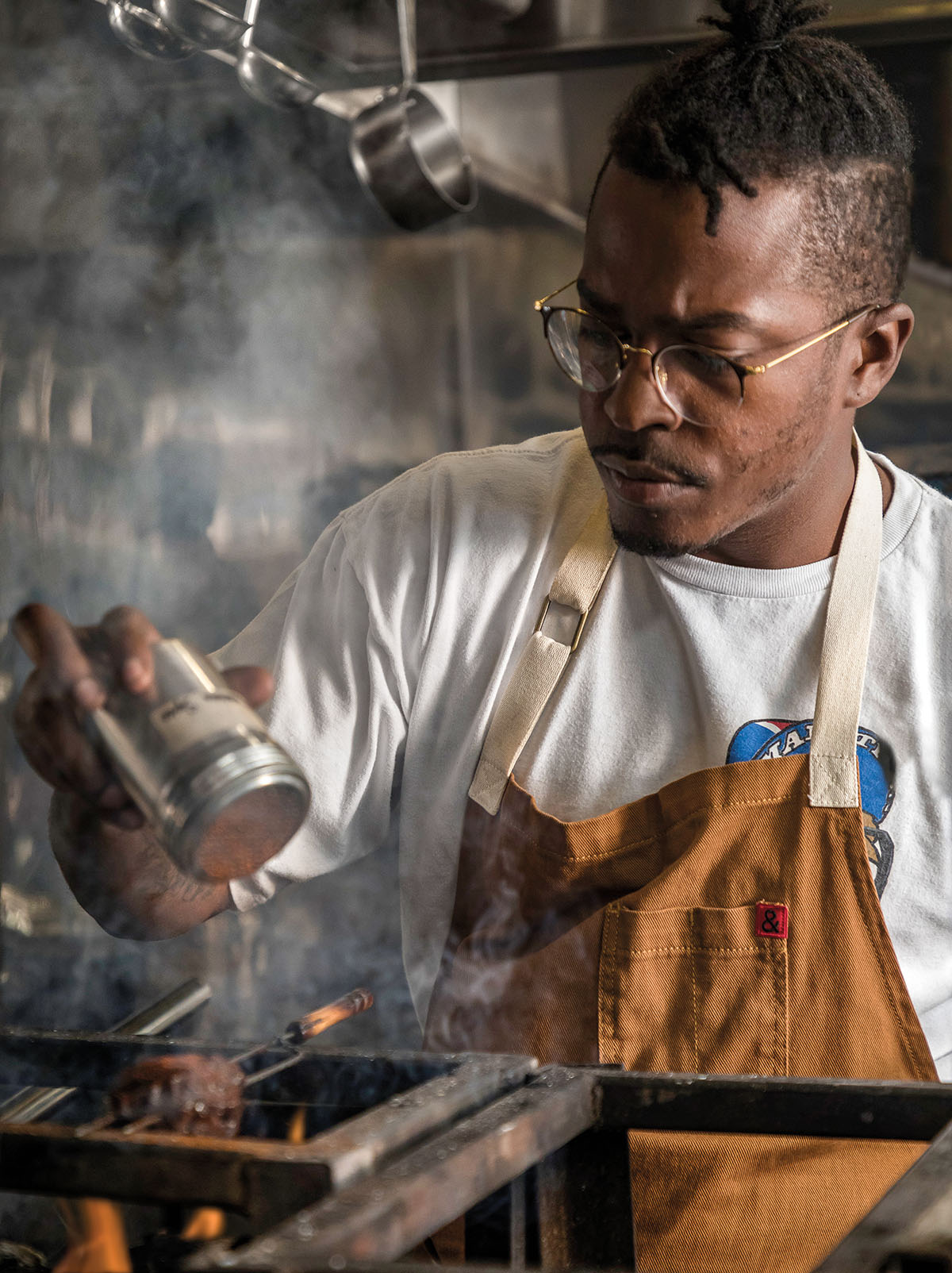 Editor’s note: In June 2020, Rhodes announced that he would close Indigo after one more year of service. Read more about his decision and plans for the future.

When you sit down to a five-course tasting menu at a restaurant, you expect food prepared with a certain level of technique, artistry, and a taste of the sublime. At Indigo, a restaurant in northeast Houston, you get all that—plus a history lesson.

Over the course of the two-and-a-half-hour meal, chef and restaurant owner Jonny Rhodes explains each dish, as he interprets it, to his guests. Presenting a dish entitled “Gold Links,” pickled pumpkin with kumquat confiture gel, Rhodes draws a correlation between the way malnourished enslaved people used precious metals to protect their teeth from disease and the contemporary practice among some African Americans of wearing gold teeth. Another dish, squash with gourd pickles, is plated to resemble the crown on the Statue of Liberty, as an allegory for prisoners ordered to cultivate squash on private, for-profit prison farms. The explanations are not easy or comfortable to hear, but they tell a compelling story.

“I want to showcase our food in a different light,” Rhodes says. “Historically, soul food has always been made from leftovers and scraps. Our restaurant is a live-fire restaurant that focuses on the history of soul food, using the freshest ingredients within a 150- to 200-mile radius, and I wanted to do this here, in my community.”

Rhodes grew up just down the street from Indigo in a neighborhood known as Trinity Garden. He was an only child raised by a single mom who worked for the U.S. Postal Service. Where he lived was a food desert, or an area that has limited access to nutritious and affordable foods. “We had one grocery store that serviced the entire community, and it was basically an oversize gas station,” Rhodes recalls. “There was no fresh food or fresh produce.” 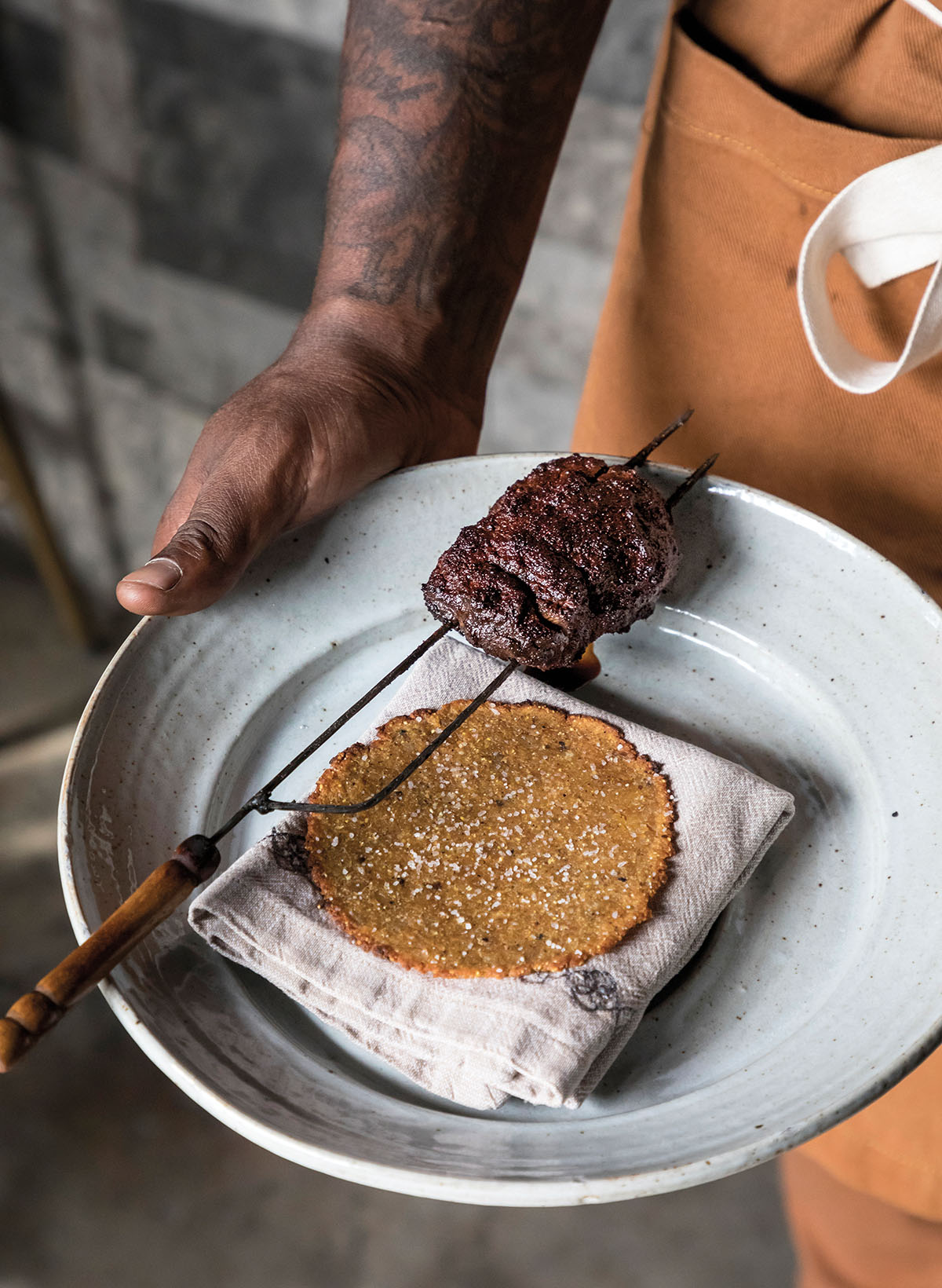 Despite this, Rhodes taught himself to cook at an early age. In third grade, he made his first successful dish—eggs Benedict—in a microwave. In the years before becoming a renowned chef, cooking was a means of survival, and the ingredients weren’t always guaranteed.

After graduating high school, Rhodes enlisted in the Marine Corps. There, food became his calling. It started during his time stationed in San Bernardino County, California, where, as Rhodes recalls, “I was ‘volun-told’ to man the barbecue pit because they figured that because I was from Texas, I’d know how.” He and another Texan who had also been drafted for culinary duty found themselves working the grill every other week thereafter. Later, during a seven-month rotation in Afghanistan, Rhodes found himself reprising his role as the chief grill cook, and his future began taking shape. Rhodes had a plan for when he left the Marines: “I’m going to get out, I’m going to be a chef, and I’m going to open a restaurant.” Rhodes reunited with his girlfriend, got married, had his first child, then moved back to Houston, where he enrolled in culinary school at the Art Institute of Houston.

He got his foot in the kitchen door by working at some of the area’s best restaurants—Oxheart, a James Beard Award-winner in Houston; and the Inn at Dos Brisas, a Forbes Travel Guide five-star establishment near Brenham—before landing a job with Michelin-starred Gramercy Tavern in New York City.

Leaving his family in Houston, he moved to the Big Apple hoping for greater opportunities, but it didn’t turn out the way he envisioned. As a prep cook and butcher, he was paid $11 an hour, which was barely enough to survive in one of the most expensive cities in the world, let alone support a family. It became clear that if he wanted to be successful, he needed to do it on his own terms. He returned to Houston and resolved not to work for anyone else and to open a restaurant of his own.

He went back to school to study history at the University of Houston-Downtown. To make ends meet, he and his wife, Chana Rhodes, staged 14 pop-up dinners previewing what Indigo would eventually become. “We went anywhere we could,” Rhodes says. “Halfway houses, drive-ins; we did to-go.”

Eventually, he found the location for his restaurant, an 819-square-foot space that had been abandoned for 25 years. He gutted and built out the space himself. “I had a pretty clear idea of what I wanted to do that crystallized and came together because the space had no gas line,” he says. “Instead of paying the $10,000 to put one in, we decided that we were going to do all our cooking by live fire. Doing so also fit into the scheme of how people were living back in the day.”

In July 2018, the Rhodeses opened Indigo, offering two seatings a night, four nights a week. The restaurant sits next to a convenience store on a corner lot located in a predominantly African American neighborhood. The name Indigo comes from indigo dye, one of the most valuable commodities enslaved people brought to the United States from Africa.

The restaurant’s 13 seats—symbolic of the 13th Amendment—are arranged in a U-shape so guests can engage in conversation. “The idea and concept was to sit down at a table and have conversations about hard things,” Rhodes says. The menu drives the conversation. A dish named “Ten Toes Down” addresses the religious tensions among African Americans of different faiths in the 1960s. “The Nation of Islam didn’t associate with other African Americans fighting for civil rights because eating pork was like eating the food of their oppressors,” Rhodes explains. The dish is made of cured, smoked scarlet turnip—“vegetable ham”—served over braised collards. Rhodes turns a traditional soul food dish into something that everyone can enjoy. 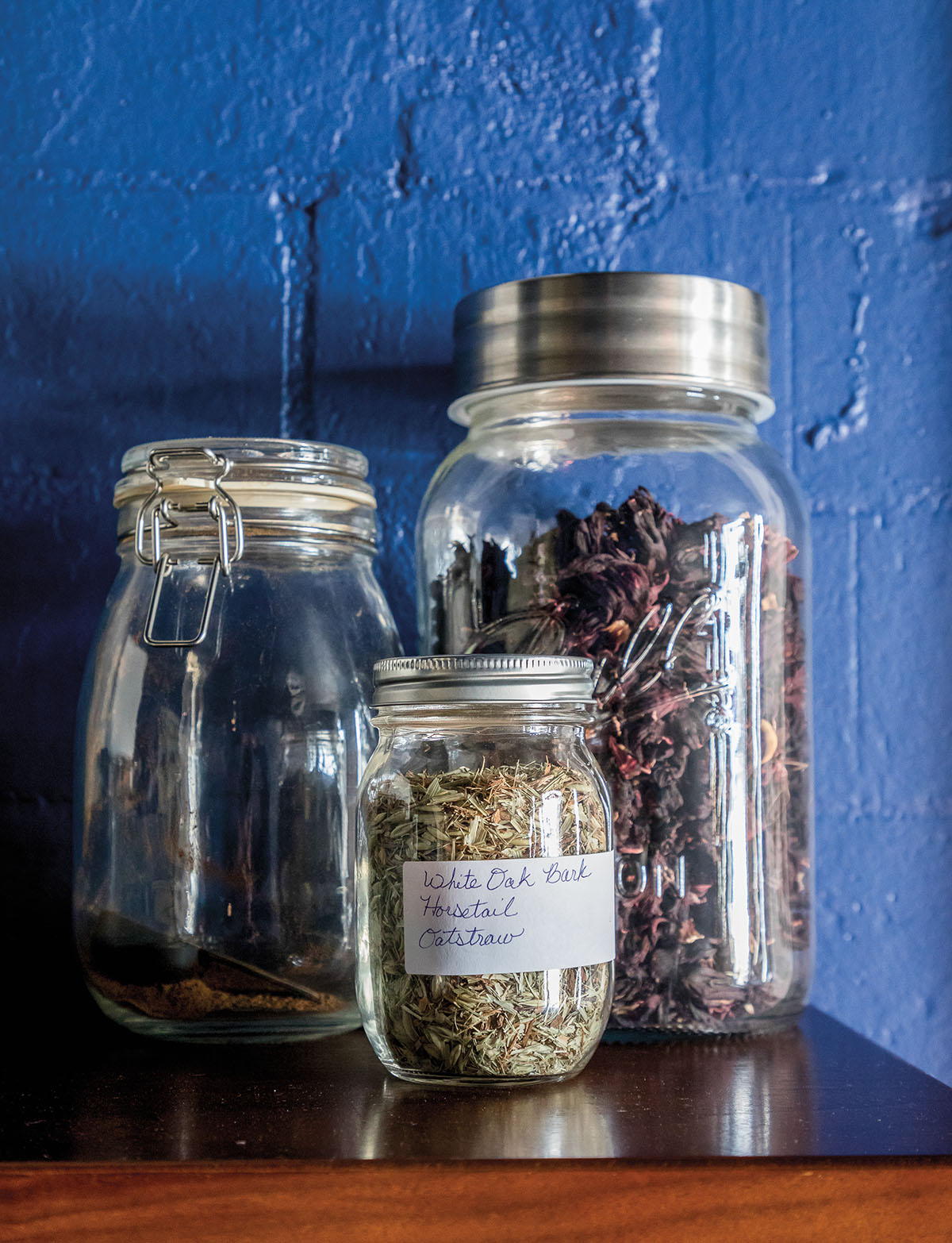 Similarly, with “Assimilation Is Not Freedom,” Rhodes juxtaposes a piece of smoked, aged Italian pastrami with Carolina heritage brown mustard to address how whites and blacks are portrayed differently in popular culture. “In movies like Scarface or The Godfather, the Italian mob is romanticized, shown to be business-savvy, family-oriented, and highly educated, whereas African Americans maneuvering in the same manner were not being seen the same socially.”

The subjects brought up are so heavy at times, it can leave you reeling. But for those who enter with an open mind and a willingness to listen, Rhodes’ fearlessness and approach to food leave an indelible impact.

Critics have taken notice. Indigo made Food & Wine’s list of the 10 Best Restaurants of 2019, and Time chose it as one of the World’s 100 Greatest Places of 2019. The James Beard Foundation recognized Rhodes as a Rising Star Chef semifinalist. Celebrities have come knocking at Indigo’s door, too. But Rhodes is unfazed by all that. He says he wants everyone who comes to his restaurant to feel like a VIP.

The COVID-19 pandemic, which ramped up in the U.S. in March, caused Rhodes to reevaluate his situation. While Indigo is currently closed, the Rhodeses have been able to realize another dream: opening a self-sustaining grocery store for the community. The couple has turned Indigo into a neighborhood market, with plans to eventually relocate to a permanent space nearby.

The new venture is called Broham Fine Soul Food & Groceries. There, you can find fresh produce and items like yam skin molasses, benne seed butter, and a variety of pickles as well as seasonal items like roselle hibiscus roll cake, Carolina gold rice ice cream, and crawfish boudin. In a sense, Rhodes’ journey has come full circle. Thanks to him, the community he grew up in is no longer a food desert. He hopes to continue the market even after Indigo resumes operations. Whether in his market or restaurant, Rhodes is challenging what soul food could and should be.

“I want people to walk away empowered with knowledge, facts,” he says. “I want them to see not just the plight of my community but the willingness and grit it requires to continue to survive.”