From a famous murder trial to mischievous spirits, these guided walks take you on trips into each town's past 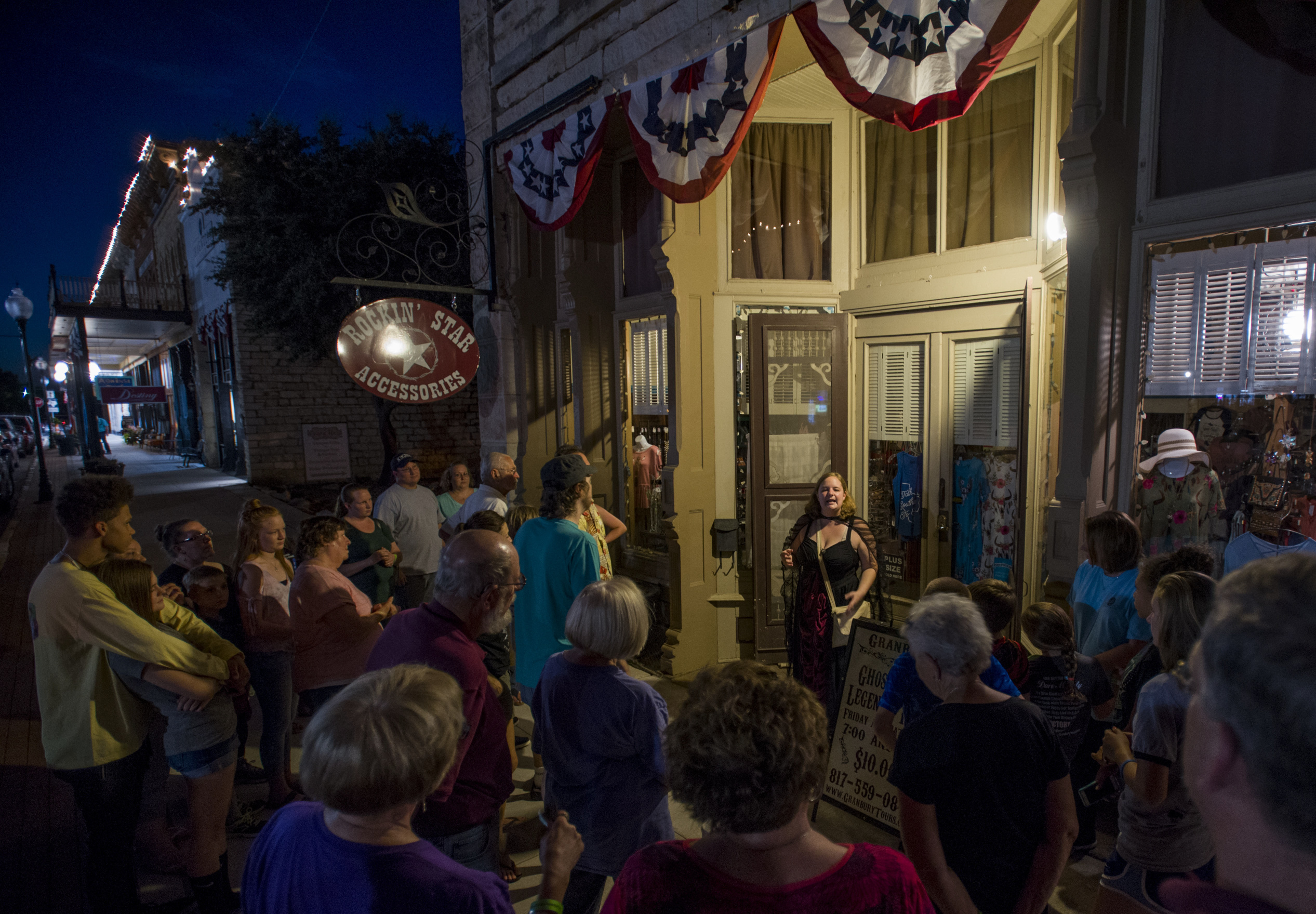 Gather on Granbury’s downtown square for the Granbury Ghosts and Legends Tour, a walking tour led by Brandy Herr, author of ‘Haunted Granbury.’ Photo by by Michael Amador.

Fall is just around the corner, and what better time than Halloween season to dive into the spooky and paranormal. Indeed, in towns throughout Texas, including Jefferson, Bartlett, and Granbury, there are a variety of walking ghost tours that guide guests through a town’s vivid history, touching on dark subjects like murder, shootouts, hangings, suicides, arson, railroad tragedies, and ghost sightings, but also more lighthearted lore, such as a bell from the Alamo turning up in a Seguin hotel and a young ghost who likes to play tag in downtown Bryan.

During these ghost tours, you might feel like someone is holding your hand, or you may even smell cigar smoke or perfume all around you. Is it indeed a ghost in your presence, or is it all in your head? Regardless of your believer status, these spooky and historic Texas ghost tours are worth checking out this fall.

For Those Who Love Historical Figures

Brandy Herr, co-owner of Granbury Ghosts and Legends Tours and author of “Haunted Granbury,” studied local history and went through town asking people about their ghost encounters to create her local tour. “At almost every place, people would say, ‘Let me tell you what happened just last week,’” she says. Tour stops at places like the Langdon Center Art Gallery may produce some ghost encounters, which have even shown up in attendees’ photographs. As for what visitors may learn during a stay in the small town, “everything leads back here,” Herr says. “John Wilkes Booth, Jesse James, David [Davy] Crockett, and even Chewbacca are connected here,” she says. It’s true, Peter Mayhew, the actor who played the Star Wars character, did live in Granbury for a time. The kid-friendly ghost tour runs Friday and Saturday nights year round.

For Those Who Love Famous Murders

For 23 years, historian Jodi Breckenridge has hosted the Historic Jefferson Ghost Walk Tour, discussing the history and spirits at places like the Historic Jefferson Hotel. In researching Jefferson’s haunted history, Breckenridge utilized archives, books, and even a local historian. “There are stories that people who have lived here their whole life may not even be aware of,” she says. The tour discusses famous railroad tycoon Jay Gould and the famous murder of Diamond Bessie, among other intriguing subjects. Even a once-skeptical Breckenridge says personal experience and research has led her to believe more in the paranormal. “I’ve learned to be more open-minded because there are things you’re not going to find logical explanations for,” she says. The Jefferson tour takes place every Friday and Saturday night year round.

For Those Who Appreciate Forgotten History

In creating the Bartlett Ghost Tours, founder Jeanine Plumer didn’t rely too heavily on libraries, instead reaching out to former and current Barlett townsfolk to uncover forgotten stories, mainly from the African American community. “It’s not uncommon to find that African American history is not really found in libraries,” she says. “So the only way to find that history is to find the people who lived here, because they do have this history and genealogy, but it’s in their closets and garages. That’s how we uncovered the stories we tell.” Stopping at places like the Bartlett Red and White Grocery and an abandoned bank, Plumer touches on ghost sighting stories, including Native Americans seen in full garb, and a couple’s ghost-like experience during a late-night drive that saved them from running off the road. Tours are held year round on a varied schedule. The next one is Sept. 10.

For Those Who Aren’t Scared of Cemeteries

Love a good cemetery tour? The Montgomery Historical Society and Montgomery County History Task Force are co-hosting “Voices From The Past,” which includes a tour of three Montgomery cemeteries. “These are the resting places of many who fought for independence from Mexico, served in the Confederacy, and figured greatly into Texas becoming a state,” says Beatrice Rouse, media board member of the Montgomery Historical Society. During the guided three-part cemetery tour, guests encounter actors in period-appropriate costumes recounting the stories and histories of people buried there, including Dr. Charles B. Stewart, who is often credited with drawing and designing the Texas flag. You’ll learn all about early settlers of this Texas town during the one-night-only, four-hour event on Oct. 22.

For Those Who Love Haunted Hotels

Former museum curator Erin Ghedi and her preservationist husband, Jim Ghedi, purchased Seguin’s 1840 Magnolia Hotel in 2013, after the building was listed as an endangered space by the Texas State Preservation Board. The couple restored the historic hotel and converted it into part home/part bed and breakfast. The beautiful hotel has historic Texas roots, with ties to the Texas Rangers, Comanche raids, and even the Alamo—a bell believed to be from the legendary mission was housed at the hotel for 50 years. It is also inhabited by friendly ghosts who make their presence known through tobacco scents and random door closings. “It’s not an unpleasant haunting in the least bit. Everybody leaves thinking it’s a really cool place,” Erin says. Hotel tours led by the Ghedis take place twice a month.

For Those Who Appreciate the Wild West

Amber Tindall interviewed locals about ghost encounters and researched Bryan history at the Carnegie Public Library to create the Bryan Ghost Walk. During the guided walking tour, Tindall takes guests through downtown, recounting stories about Bryan’s colorful history and even meeting some friendly ghosts along the way. Though Tindall says attendees may interact with playful spirits like young Wendy, the experience isn’t frightening. “We aren’t a haunted house-type tour. We are more history and fact-based, but we do love spirits,” she says. Tindall also says to expect “Wild West vibes” on the tour: “Especially when [Bryan] first started there would be things like a middle-of-town shootout, even a few hangings.” The fall tours run Sept. 30-Nov. 5.

For Those Who Love a Good Brew

In preparing the Haunted Taylor ghost tour, Frances Sorrow, president of the Taylor Conservation Heritage Society, said a team referenced Taylor’s and surrounding cities’ newspaper archives, inquired about locals’ personal ghost experiences, and hired mediums and psychics to track paranormal activity in town. So what does the tour cover? Think ax murder, suicides, and arson. “We learned Taylor has a lot more violence in its early years than we envisioned,” Sorrow says. The ghost tour takes place Oc. 22 and 29 and includes a complimentary beer or root beer from a local microbrewery.