Built in 1899, the Dr. Eugene Clark Library is a small but mighty presence in the Caldwell County town of Lockhart 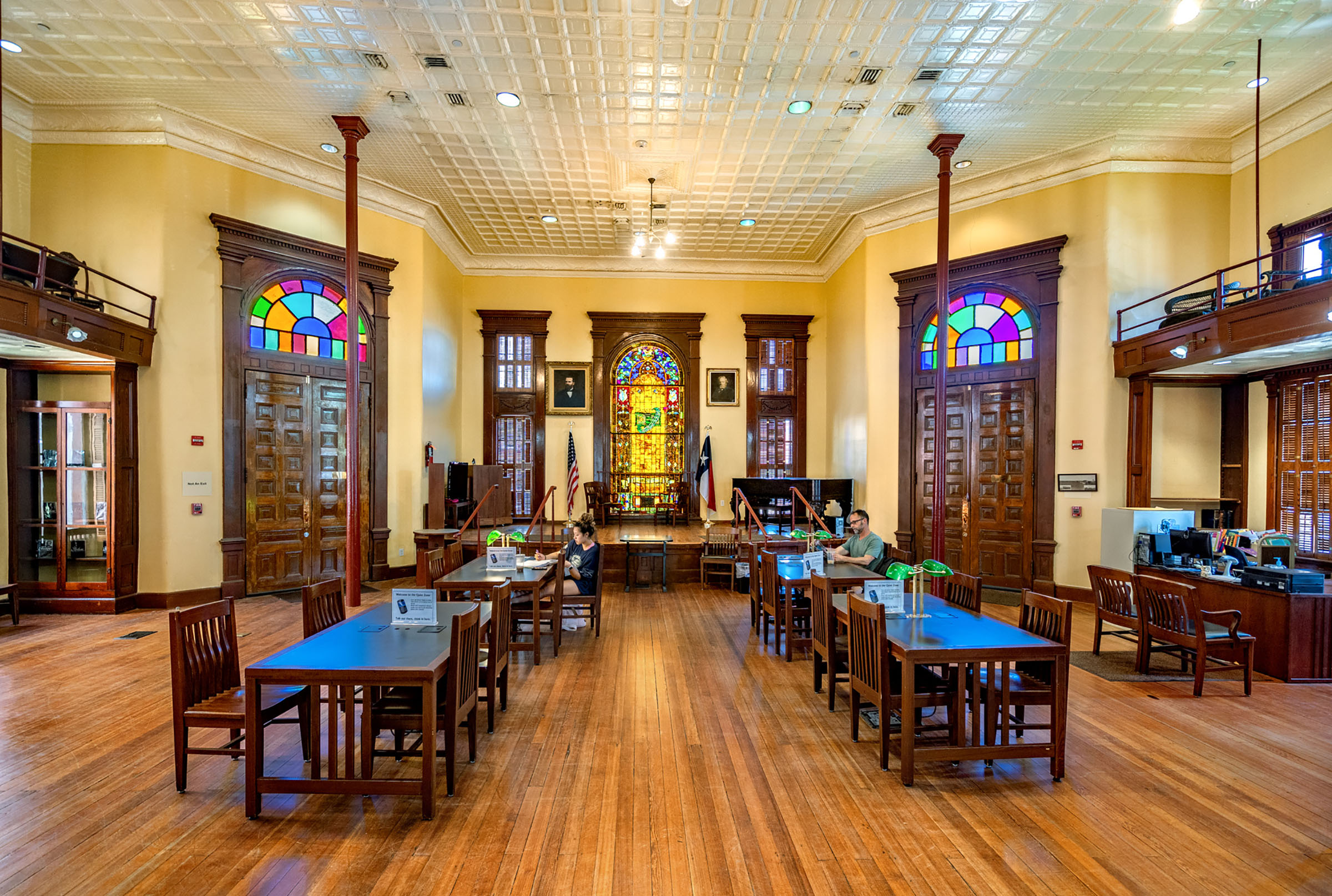 The main room of the Dr. Eugene Clark Library in Lockhart.

Step inside the Dr. Eugene Clark Library in Lockhart and you’re immediately met by an “old library” scent—woody, almost like chocolate and coffee. Late-morning sunlight floods into the high tin-ceilinged space. Pairs of green-shaded lamps sit in the middle of each table, where a handful of patrons read and study. Daily local and national newspapers are displayed on the racks to one side.

Located at 217 S. Main St., about a block from the striking Caldwell County Courthouse, the Dr. Eugene Clark Library is the oldest continuously operating library in the state that’s housed in its original building, erected in 1899. (The Rosenberg Library in Galveston was founded in 1871, but its facility is younger than Lockhart’s by five years.)

Lockhart’s two-story library was designed by local contractor T. S. Hodges, who is known for his work on other projects, such as the Tyler County Courthouse and the castle-like Caldwell County Jail, also in Lockhart. The library’s deep red-brick Classical Revival dome-topped building is vivid and stately, and serves as one of the cornerstones of the Lockhart community.

The centerpiece of the historical library is a large and ornate stained-glass window above a stage on the eastern side (the building was first conceived as a lyceum). “A lot of people think it’s a church,” says Mark Diaz, the city training coordinator who has worked at the library for 20 years. Fittingly, an open book of illuminated green and yellow glass is featured at the center of the window, reminding visitors that books are the devotion here. Two iron spiral staircases lead to the upstairs gallery. Behind the narrow gallery is the Irving Room, the home to the second oldest chapter of the Texas Federation of Women’s Club. 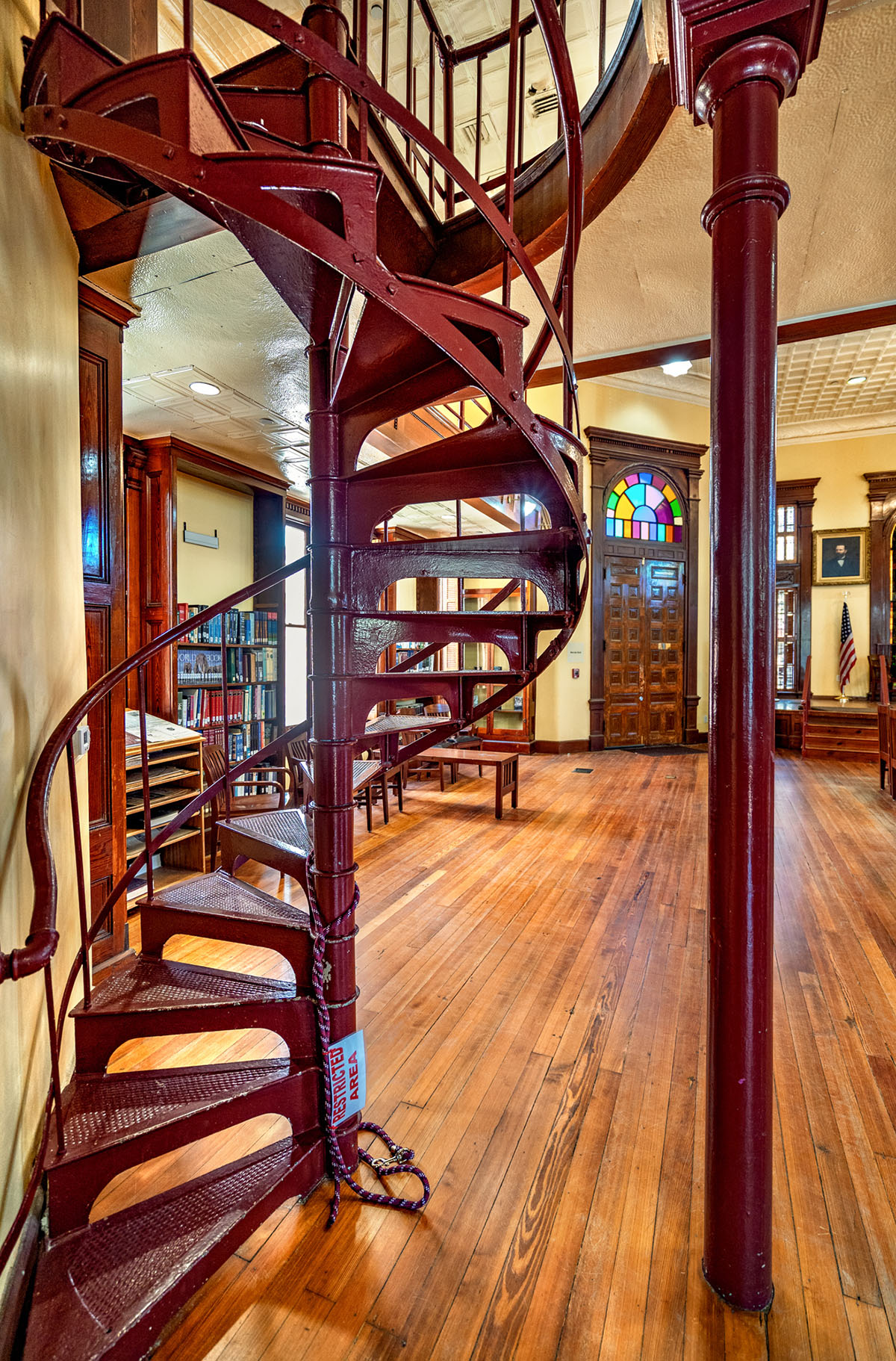 The spiral staircases are one of the unique features of the 1899 library. 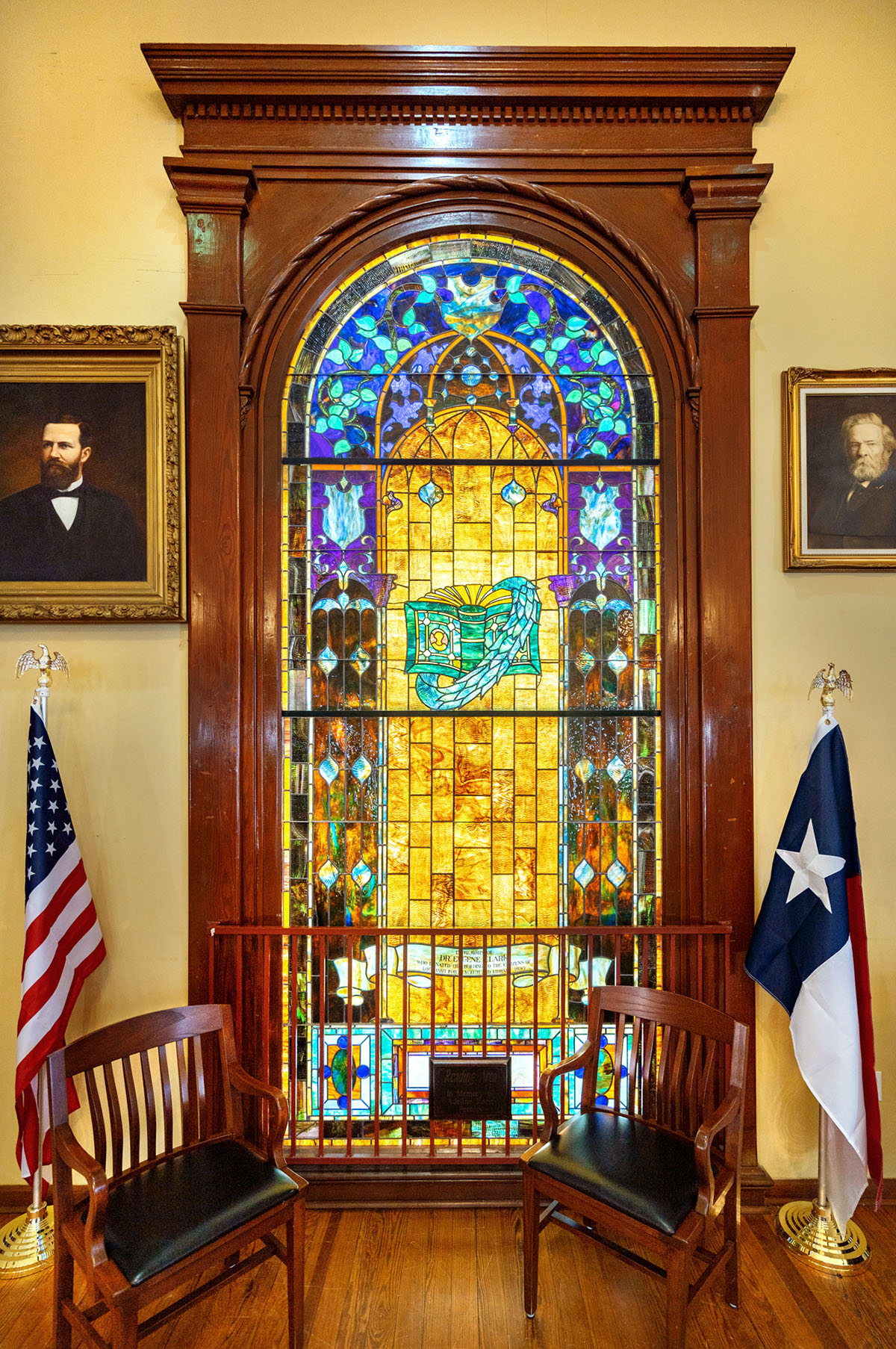 The stained-glass window shows the devotion the Dr. Eugene Clark Library has to books.

As the library’s name suggests, the building was founded—and funded—by Dr. Eugene Clark, who lived and practiced in Lockhart for some 13 years in the late 1800s before studying in London and Vienna and eventually returning to his native New Orleans. In the Irving Room, in several glass-encased bookshelves, a visitor can take in the old spines of the doctor’s original medical textbooks, including The Rules of Aseptic and Antiseptic in Surgery by Arpad Gerster (1888) and Text-book of Hygiene by George H. Rohé (1885).

Local folklore suggests the establishment of the Irving Room was due to the doctor’s own unrequited love. During his time in Lockhart, Clark became acquainted with a young woman named Mamie Steele, a member of the local lyceum club that organized public lectures, concerts, and other community events. Unfortunately, at the time, Steele’s heart belonged to another man. Prior to his early death in 1897, Clark left $10,000 to build a library for Lockhart and specified that it should include a meeting room for a women’s lyceum. Local members of the Irving Club still meet in the second-floor space.

In 1996, the library was expanded to include the neighboring 1850 Masonic Temple. The renovated building now houses many of the library’s books as well as the technology room, and the third floor of the temple houses the meeting place for Lockhart’s City Council.

The library’s collection of books amounts to 38,000 items. Famous visitors include William Howard Taft, who delivered a speech on the library’s stage at the turn of the century, and more recently gubernatorial candidate Beto O’Rourke visited the library during one of his campaign stops. In addition, the library’s interior has frequently been used as a set location for movies, such as Robert Rodriguez’s The Faculty (with Elijah Wood and Josh Harnett) and Tim McCanlies’ Secondhand Lions (with Haley Joel Osmont, Michael Caine, and Kyra Sedgwick).

Another famous moment at the library occurred in 2000: Librarian Rose Aleta Laurell scaled the building and spent a week living and working on its domed roof in order to raise funds for the children’s section of the library. (She raised $39,000, which was $19,000 over her goal). And each year, community-wide festivities take place at the library, including the Dickens Christmas, which features a variety of entertainment for the entire family.

“We love our library,” says Jeanna Trejo, the assistant director and a 33-year employee. “There is never a dull moment.”