With construction crews currently rebuilding the structure, a ceremony commemorating the fire will take place Friday 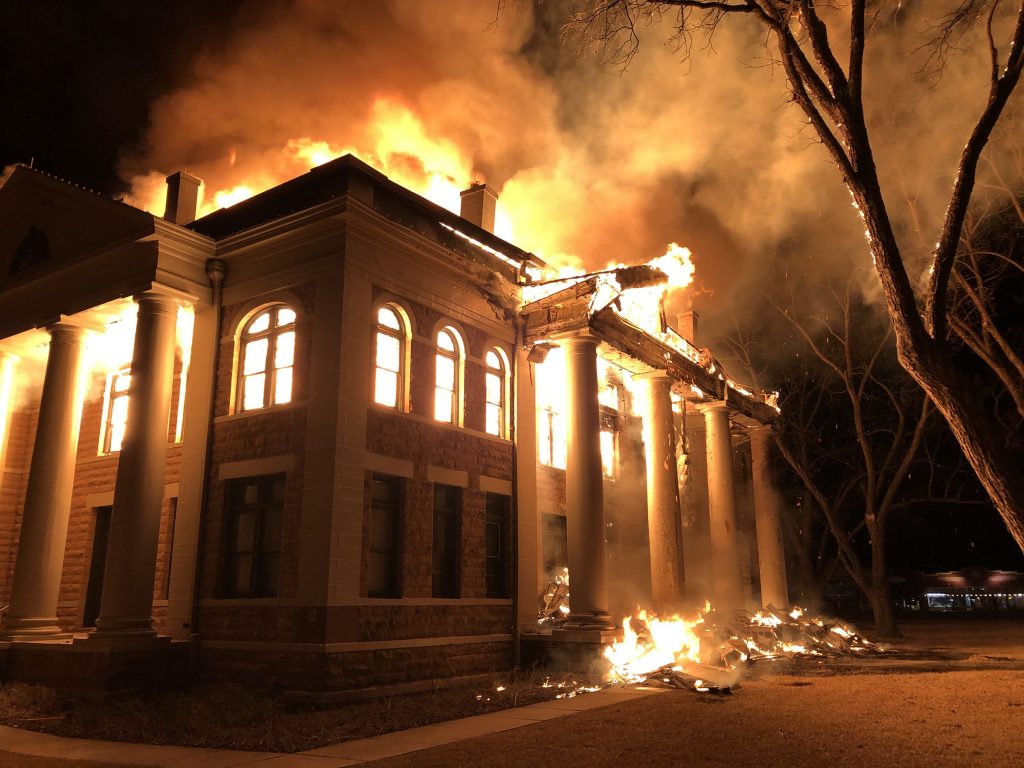 The Mason County Courthouse was set ablaze the night of Feb. 4, 2021. Photo by Jerry Bearden.

A year after the Mason County Courthouse was nearly destroyed in a fire, scaffolding is rising around the 112-year-old structure.

“It’s amazing,” says County Judge Jerry Bearden, who watched the office he’d worked in for 18 years go up in flames on the night of Feb. 4, 2021. Today, he can see the construction crews working on the structure from a temporary office across the street. “For me to sit in my office and look out the window now and see guys in hardhats and yellow vests putting up scaffolding makes me know we’re going to get this courthouse rebuilt,” he says. “We’re going to go forward; we’re not going to quit.”

Back in 1909, the courthouse was constructed using local limestone for $39,786. Designed by architect E.C. Hosford, its rock walls and two-story columns in the Classical Revival style survived last year’s blaze, but the center dome and clock tower were lost, and the interior of the historic structure gutted.

It wasn’t the first courthouse in Mason to burn: two others were damaged by fires in 1877 and 1900.

Despite the destruction of last year’s fire, it could have been worse. Because officials were already making preparations to restore the building, they’d moved all the records stored there, along with computers and most of the furnishings, to a building across the street.

“The only thing we lost besides the courthouse were some historical furnishings in the district courtroom,” Bearden says.

A suspect, Nicholas Miller, was caught a few days later and charged with arson and burglary of a building in connection with the incident. A bond was set at $1.8 million. According to Bearden, no trial date has been set yet and Miller remains in jail.

Stoddard General Contractors of Spring Branch is leading the reconstruction. The project is expected to wrap up in about 17 months, although supply chain shortages have made it difficult to secure needed materials, Bearden says.

Concrete support beams will go up in the coming weeks, followed by metal beams and trusses for the roof. “Once we get a roof on it, we’ll proceed with rebuilding the inside of the courthouse,” he says.

All four walls of the main building and 16 surrounding columns survived the fire, and engineers have determined that they remain structurally sound. The rebuilt courthouse will look nearly identical to the original, but will feature modern heating, ventilation, and air conditioning systems, along with new electric wiring and an interior sprinkler system.

The county received a $4.1 million grant from the Texas Historical Commission’s Texas Historic Courthouse Preservation Program in 2020 to update the building. After the fire last year, state lawmakers approved an additional $6 million in funding. Insurance also covered some of the damage.

“The Friends of the Courthouse have raised about $2 million in donations,” Bearden says. “We’re still about $4 million short. If anybody’s got a checkbook, we’ll take it.”

A special ceremony originally planned for Feb. 4, the anniversary of the fire, has been moved to Feb. 11 due to inclement weather. The event will be held at 2 p.m. Mementos and a letter from the county judge and commissioners court will be presented to the fire departments that helped extinguish the blaze.