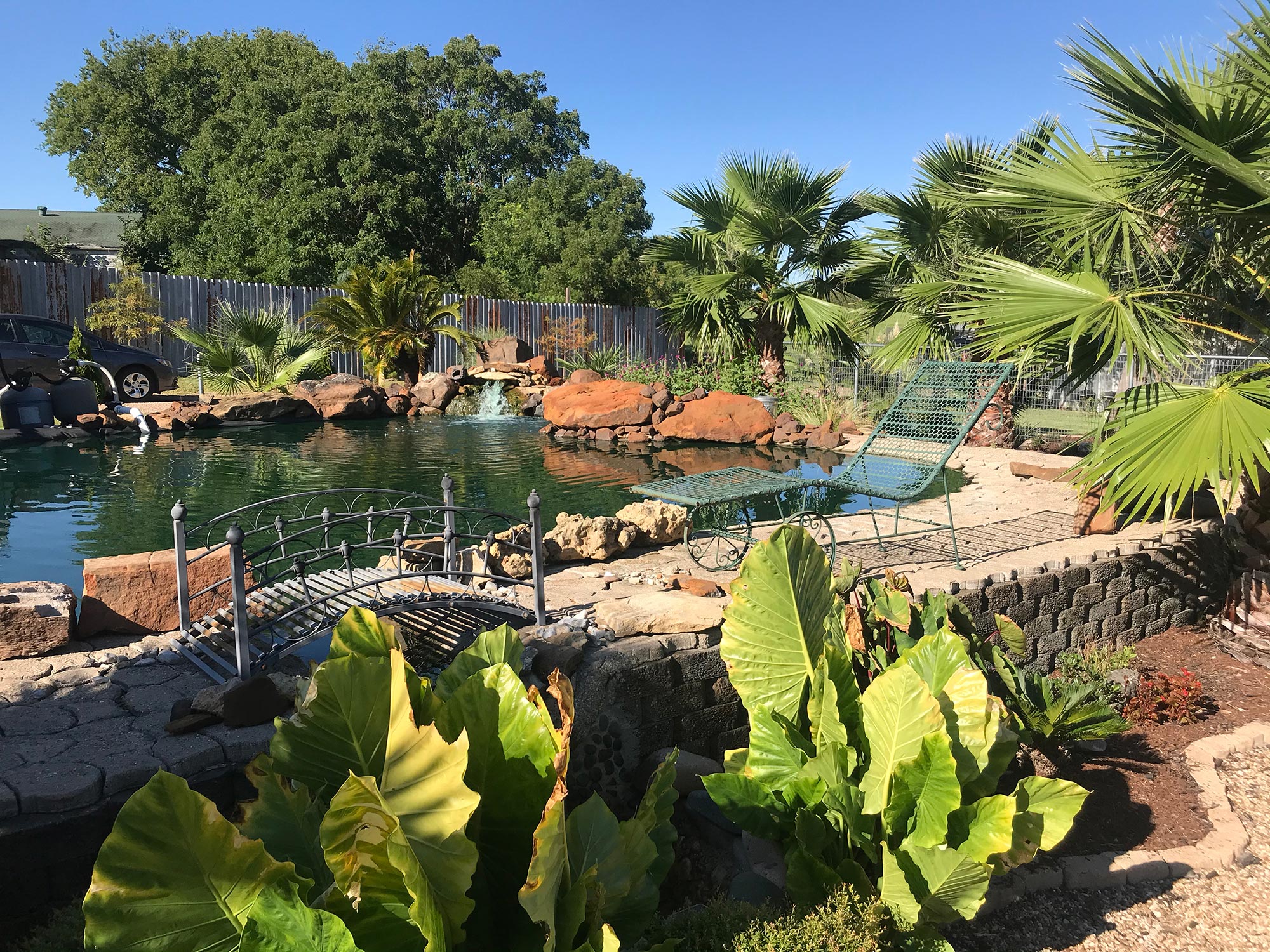 One of the ponds at the Embrys’ Sherman property. Photo by Peter Warren

The final stretch of land heading west on Farm-to-Market Road 902 is classic small-town Texas: farms, a high school football stadium, and the open road. But if you turn your head left at the intersection of FM 902 and Whitemound Road right before the town line of Tom Bean, you wouldn’t believe you were in North Texas. In your line of sight are palm trees—a bunch of them.

They aren’t figments of your imagination; they are only a few of the more than 200 palms Kevin and Tonya Embry—who a friend nicknamed the “Palm Tree Loraxes,” after the Dr. Seuss character who speaks for trees—have planted on their property.

As of August 2020, there are 203 palm trees of 13 different species planted around their residence—many of which they saved from being cut down and destroyed. In addition, they have 70 palms on their “farm,” where they grow palms and nurse sick ones back to health. While their Sherman property isn’t open to the public, the Embrys sometimes allow private tours. 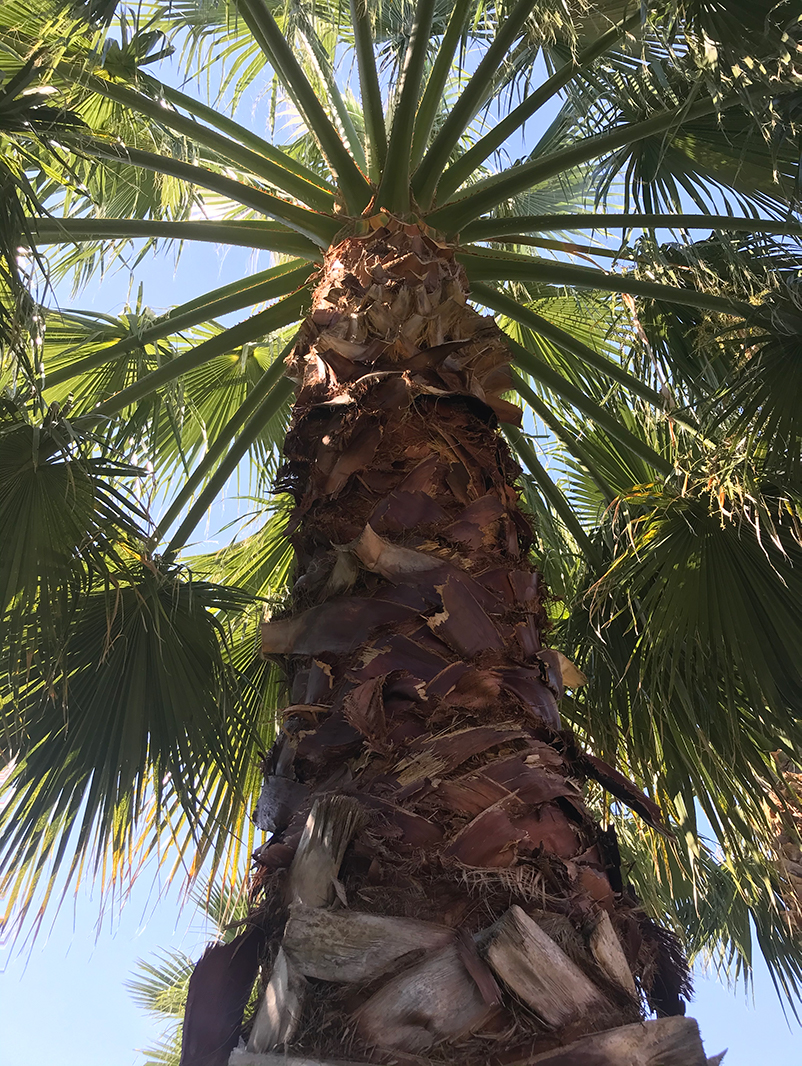 A palm stands tall on the Embrys’ property. Photo by Peter Warren

The couple’s affinity for the leafy plants stems from a lifelong love of trees. Tonya grew up in West Texas where her father planted 62 pine trees in their front yard. And as a child, Kevin lived in El Salvador for two and half years when his father relocated there for work. Since then, he’s been a fan of the tropical look.

“It’s a tropical climate all year round—palm trees and banana trees and all kinds of fruit trees and stuff,” Kevin says. “So I guess that’s where I originally learned to like the palm trees.”

What started as just a small pond and four trees in 2001 has grown into an elaborate nature display. Most of their palms come from people who simply do not want them on their property anymore. The couple began receiving more calls when a realtor started recommending them to clients who were looking to get rid of their palm trees. Soon, folks from all around the state and beyond were calling to have their palm trees saved by the Embrys.

“Most of the time people are ecstatic that we save them instead of kill them,” Tonya says. “I guess it’s kind of like saving a puppy. You give it a home. Ours just don’t come lick us in the face. They’ll poke you with their thorns.”

It also helps that the Embrys remove palm trees for free—cutting down a palm can cost $1,000 or more, according to Tonya. While many of their palm tree rescues take them to the Houston area, they have palms from as far east as Baton Rouge and as far west as California. 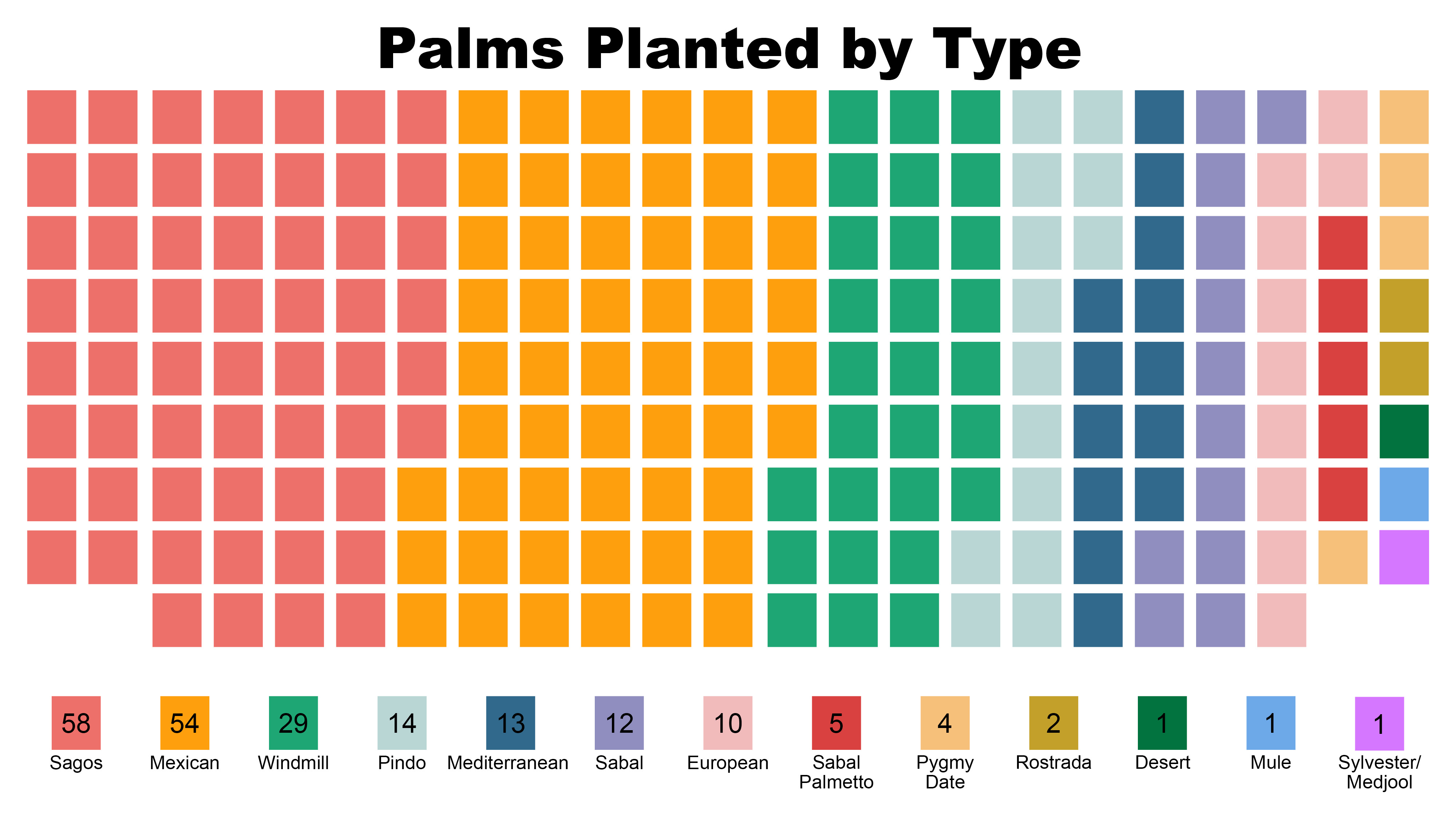 The number of each species of palm tree at the Embrys’ Sherman property. Graphic by Peter Warren

The Embrys always bring a truck and a trailer, but no two palm tree removals are the same. Sometimes, they have to dig the palm tree out with their hands. Other times, they use a tractor to lift the tree up.

“We always figure out a way to get it done,” Kevin says. “But then after we get done, I’ll start thinking about it. ‘Hey, we could do this, this, and this and make the next time we go even easier.’”

Once they bring the palms back to Sherman, they find the right spot to put them. There’s space near the two koi ponds, or in the garden areas around the house, or next to the street where they can serve as pseudo-welcome signs. In the winter, they have worked out a wrapping technique to keep the palms safe from the cold weather.

The duo originally thought they were going to call it quits at 100 trees. With more than double that already planted, they have no plans of stopping now. They will finish the rock designs on the koi pond. They will continue to start more projects. At some point, they will fill in the hole in their backyard and make it into a pool.

The Embrys’ “Palm Tree Oasis” is a private property. However, if you wish to visit or donate your palms, reach out at [email protected].