My Favorite Texas Trip: On a Fayette County Prairie, a Saint for These Times

Writer Clayton Maxwell finds comfort in a Texas-Czech painted church and the history of Saint Roch, protector against disease. 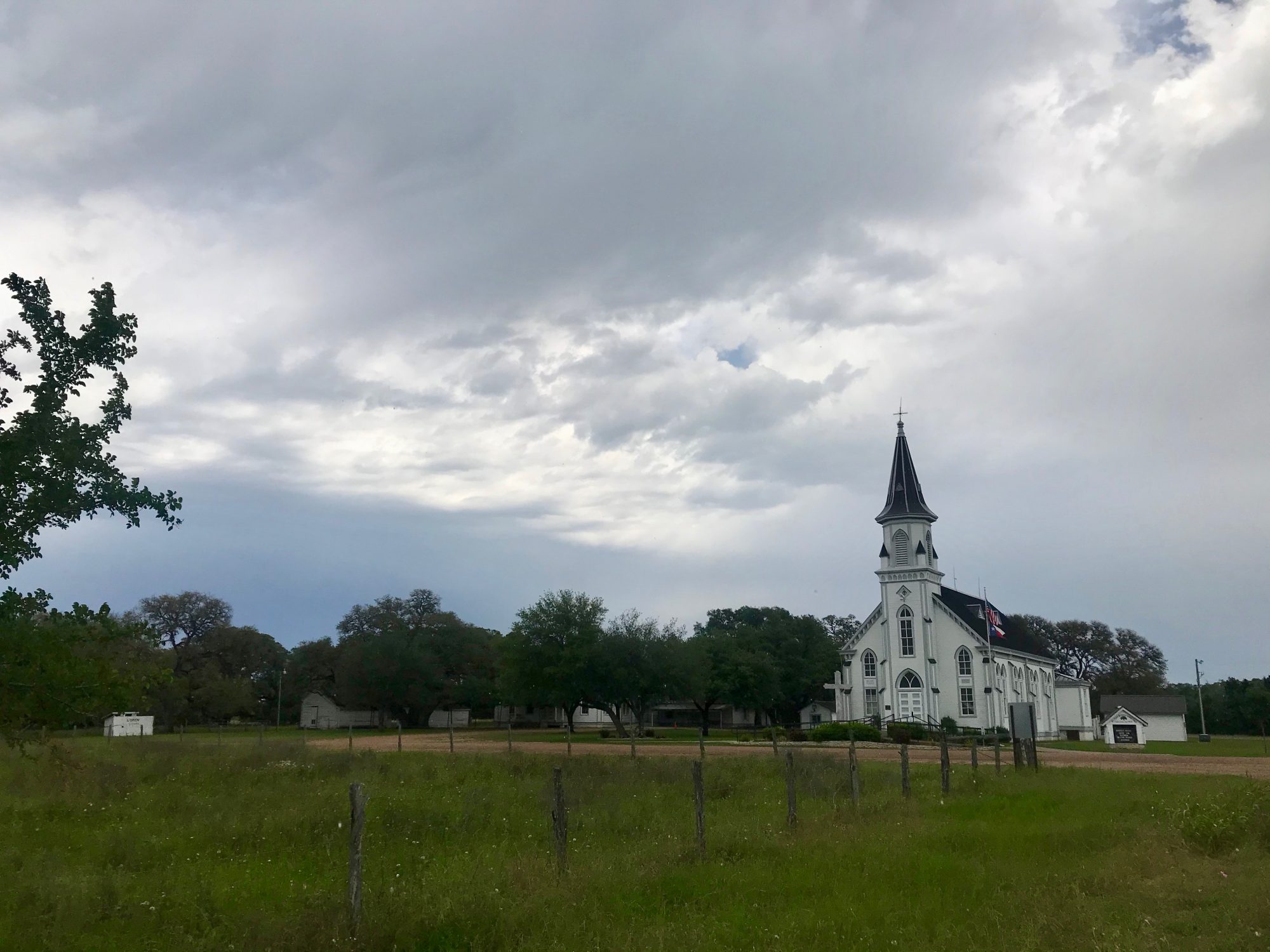 In Dubina, the first Czech settlement in Texas, a simple white wooden church stands alone amid the Blackland Prairie and backroads of Fayette County. It has narrow Gothic arched windows, a steep spire that reaches into the clouds, and gray painted doors that stay unlocked even during a pandemic.

Although we knew this church, named Saints Cyril and Methodius, was somewhere on Farm-to-Market Road 1383, it still took up surprise on a breezy afternoon in April. My family and I were out driving the backroads just to escape the confines of our house, craving to see farms and green fields after too many days inside to help slow the spread of the coronavirus. We rounded a curve and suddenly there she was—a white-steepled sanctuary in the middle of nowhere, perfectly serene. The first sight of one of the smallest of Texas’ Czech “painted churches” was a rush far sweeter than we could have anticipated. 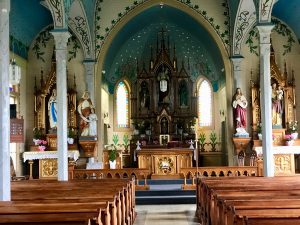 Saints Cyril and Methodius Church is one of the painted churches of Fayette County. Photo by Clayton Maxwell.

My husband, two children, and I just had a picnic on the La Grange town square, empty of people, lazing in the shade of noted architect J. Gordon Riely’s first courthouse. A carved stone gargoyle atop the sandstone doorway kept watch as we sprawled on a blanket on the courthouse’s manicured lawn and read a Texas Highways article from 2017 by writer Michael Corcoran about the Czech culture of Fayette County. Corcoran said his favorite drive anywhere in the state of Texas is the one from La Grange to Schulenberg, including a stop at the Saints Cyril and Methodius Church.

That’s a big statement—to claim one drive in Texas as your very favorite. So we had to experience it ourselves. We encountered delightful miles of lush green prairie and April wildflowers, a landscape that felt soothing and timeless amid the weeks of so much change. And then we pulled up to the historic district of Dubina, where the Czechs settled in 1856 but were later uprooted by floods and fire. Unlike big-city churches, Saints Cyril and Methodious Church seemed content with no one around, as if it was at peace ministering to wide open fields and the cows who graze them. And, in what felt like a most generous and welcoming act these days, its doors were open. 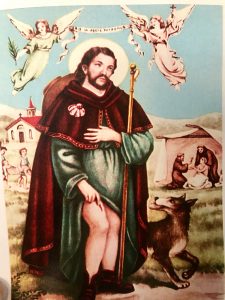 Saint Roch on a flyer in a Dubina church. Photo by Clayton Maxwell

Although we could only enter the foyer, we saw the intricate colorful stencils painted onto the interior church walls; leaves, flowers, tendrils, a sky of stars against a vivid blue. We saw the ornate wooden pews worn smooth with use, and the religious reliquary and figurines the Czechs brought over from Europe. In the foyer, bulletins about mass times and other meetings were tacked onto the wall. Though Dubina was left behind, this little church remains a sacred gathering spot for area Catholics.

Just as we were leaving, we noticed a small stack of flyers with an image of a saint dressed in flowing green and burgundy robes, holding a staff, with angels overhead. It was Saint Roch, the Catholic saint of the sick, protector against disease. On the flipside of the flyer, a prayer, “O great St. Roch, deliver us, through your intercession, from contagious diseases such as the Corona Virus… .”

We had just found the saint we all need right now. Saint Roch once cured a plague-ridden village in Italy in the 1300s, picking up the plague himself as he cared for others. He quarantined himself in a hut in the woods. The story goes that a dog found him, brought him bread and licked his wounds, and Saint Roch recovered. He is now the saint that protects against infectious disease, and the patron saint of dogs—a fact my Labrador appreciates. 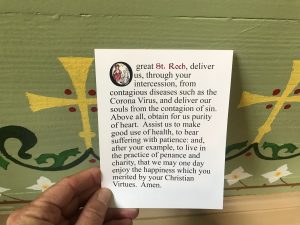 A prayer to Saint Roch, protector against disease. Photo by Clayton Maxwell

In the image at the church, Saint Roch is pointing to a wound on his leg, which, I later learned, is a “bubo”—the swollen lumps that break out on the bodies of victims of the bubonic plague. He wants us to see this scar, a reminder of what he’s been through. Maybe because, for good or ill, you’re never quite the same after an experience like the plague, or, in today’s world, like the coronavirus. Maybe because he wants us to remember who was lost and how we have changed. Maybe he’s showing off. I can’t be sure why exactly he’s pointing out his wound, but he wants us to pay attention.

That little Dubina church, resilient and reaching skyward, has for my family and me become a totem of resilience and refuge during the challenging days of spring 2020. And although we are not Catholic, I now wear a small oval pendant of Saint Roch around my neck. If he was willing to walk into a plague-ridden village and save lives in the 1300s, I bet he’s gracious enough to pray for us, despite our different religions. In times like these, it’s nice to think that someone’s looking out for you.